Where to Drink the Best Craft Beer in Porto 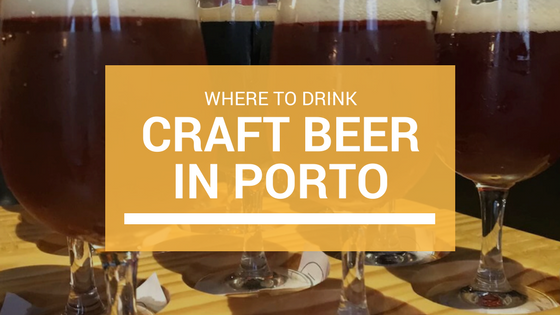 Before arriving in Porto I booked a running tour around the city as part of Training for the London Marathon.

The guide runner, Sergio, has since given told me a useful nuance about ordering beer on tap in Portugal:

The standard “Uma Cerveja” will work in both cities, but you may get a question from the bartender: “pressão ou garrafa?”, which translates as ‘tap (draft) or bottle?’

Did I use this insider knowledge to order a beer whilst in Porto? Did I heck – everyone seemed to speak pretty much perfect English.

Of course, Porto is the place for discovering wines from the Douro and Port, but I still managed to find time to check out beers from the burgeoning craft beer scene.

Where to Drink Super Bock

Porto has Super Bock by Unicer Brewery on tap everywhere – it is the best selling Portuguese beer in the world, although you’ll hardly see it in the UK.

Unicer is a subsidiary of the Carlsberg Group, and the beers are brewed in Matosinhos, a city to just to the North west of Porto, nestled on the Atlantic coast.

Probably the best place I found for tasting this brewery’s range of beers was in Municipal Mercado. a cool market over the river in Vila Nova de Gaia, right on the harbour. 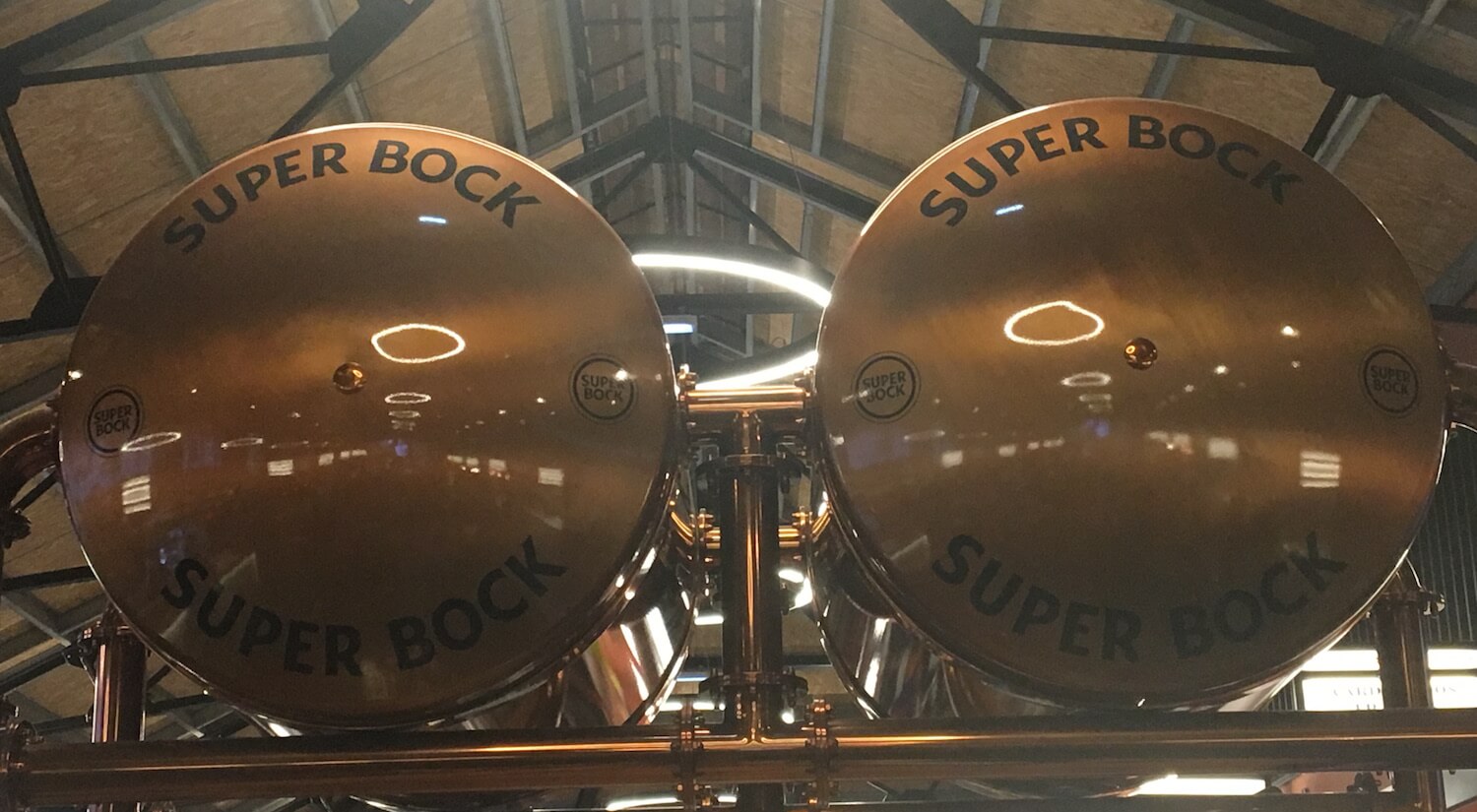 The island bar in the middle of the market has a touchscreen where you can find out more about each beer type in different languages.

The brewery was founded in 1927, and have used this as a branding tool for a range of ‘craft’ beers. 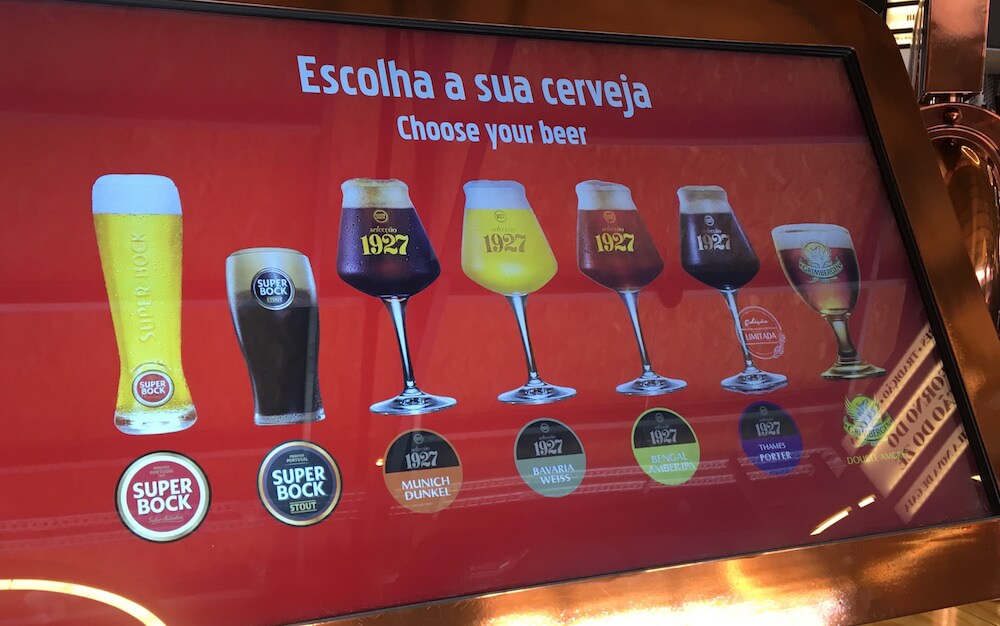 After all the Pastel de Nata and the sweetness of Port wine, I needed the bitterness that only an IPA can deliver.

I did not get to taste all of these beers, only having time for the Bengal Amber IPA, which seemed well made, resinous, and is served in a quality Teku glass. 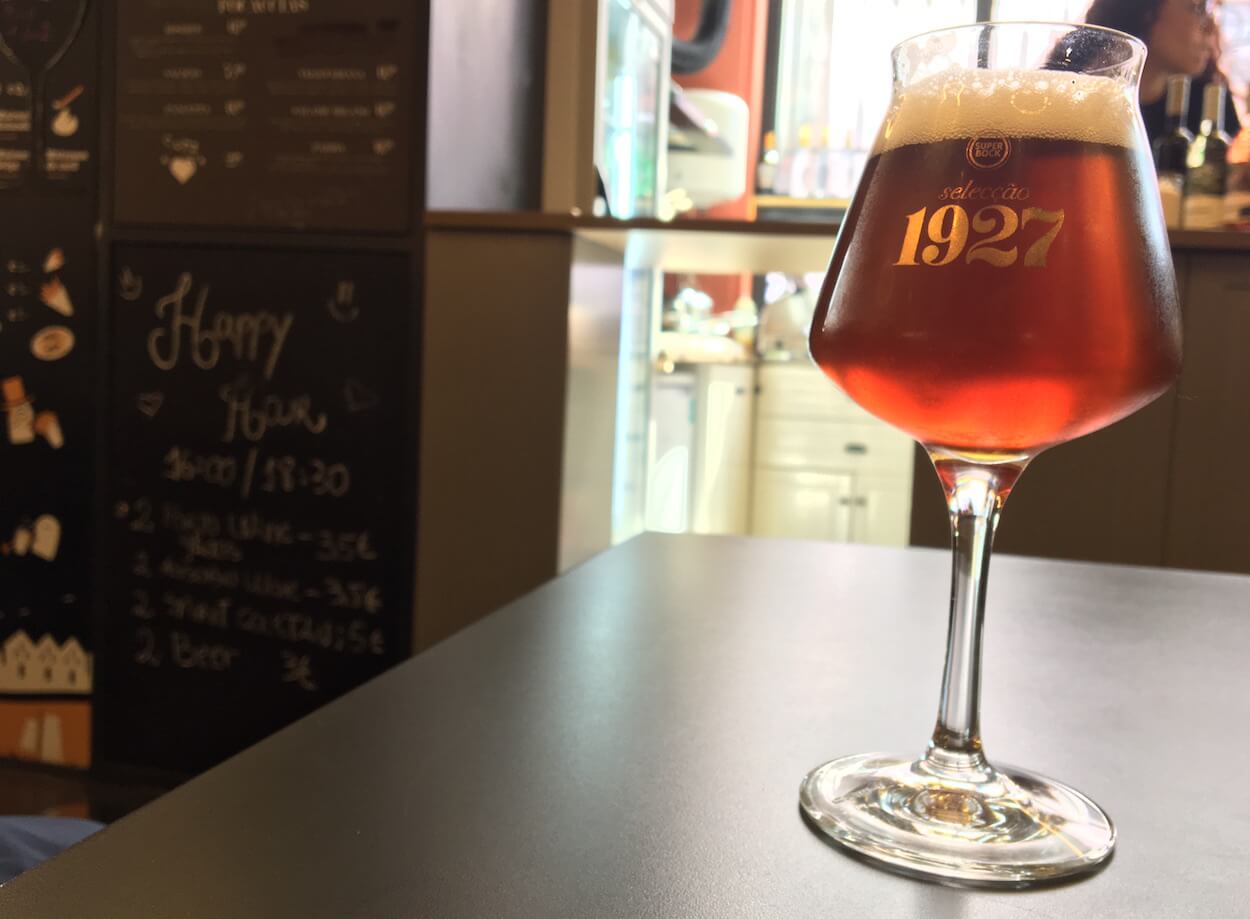 Later that day we headed across the other side of town to check out the real craft beer scene in Porto. 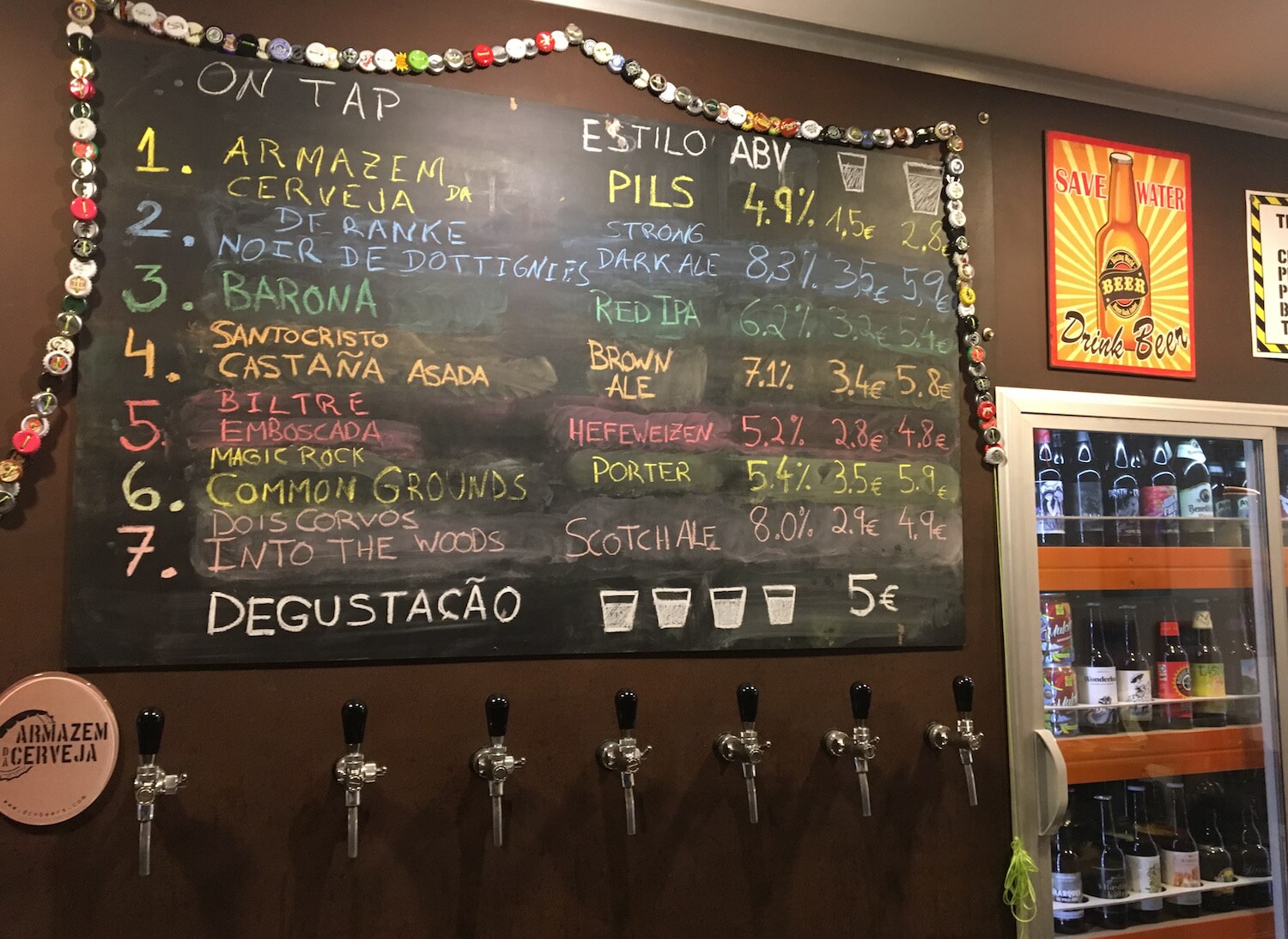 Our first stop was Armazem de Cerveja, an excellent beer bar serving 7 beers on tap as well as fridges packed with lots of interesting brews.

The beers ranged from local beers I’ve never heard of, to great ones like Magic Rock’s Common Grounds, a coffee flavoured beer from one of the top UK breweries.

I continued my fascination with Red IPA styles with the malty, bitter Barona, followed up with the Biltre Hefeweizen which had the familiar banana flavours you’d expect fron the style.

A four glass tasting is €5, which is pretty reasonable. 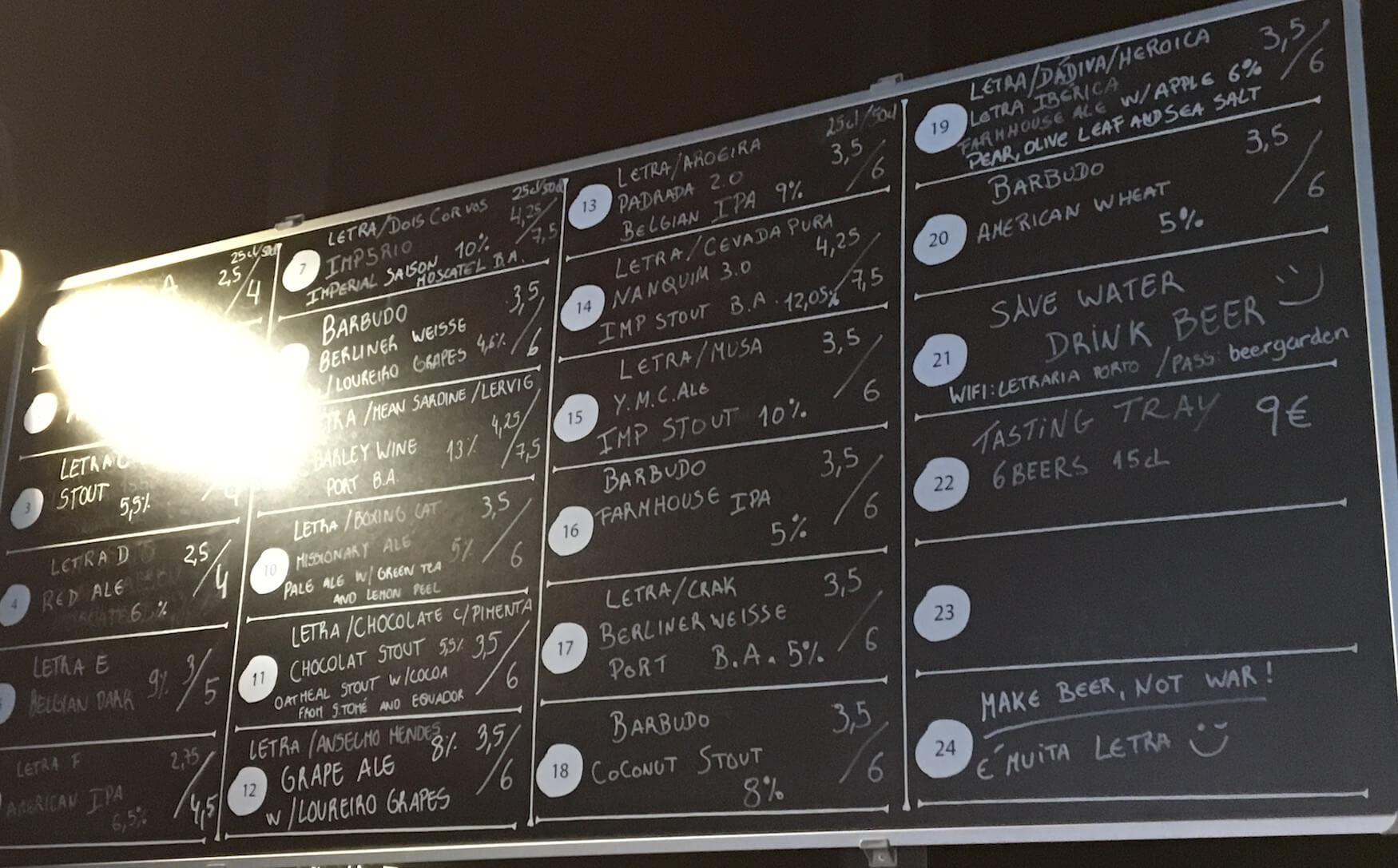 After this, we headed to Letraria, a brewpub which is just around the corner from Armazem. The taproom serves many beers from the Letra Brewery, which is located in Northern Portugal.

It just so happens that on the night we visited, the brewpub were celebrating their 1st birthday, so a special event was on.

The place was rammed!

As well as balloons, punters and music, there were a load of specialties on their impressively large tap list, probably more so than usual because of the party.

There were several barrel-aged collaborations and lots of interesting styles as well as their standard beers, which take on letters of the alphabet.

So there is Letra A, B, C and so on. These are the ones you may commonly see around Porto in tourist shops and also at the airport. 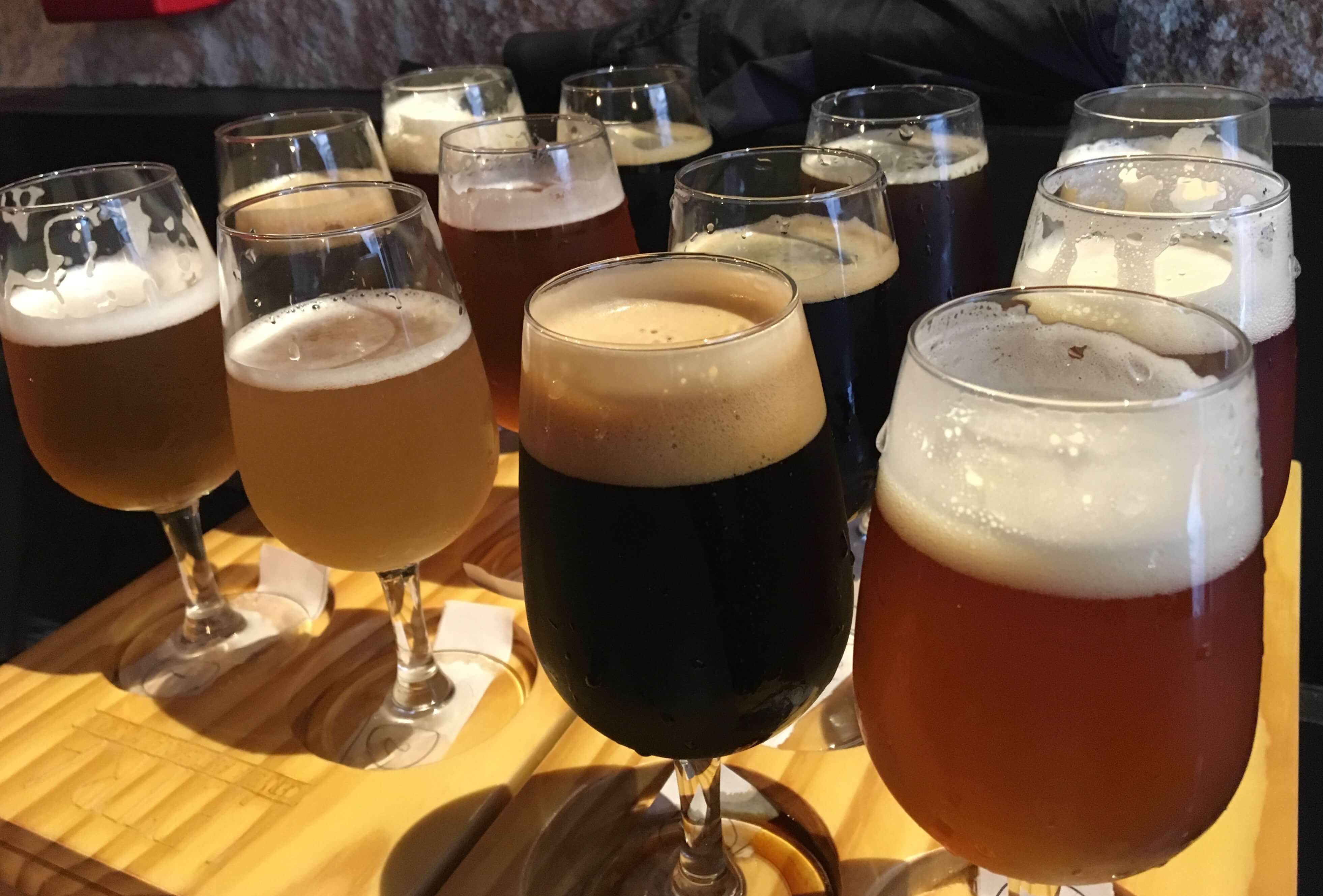 I decided to get a 6-beer tasting paddle of the following beers.

I was pretty keen on seeing how the Port barrel affected flavours – and was not disappointed with the complexity it offered, with the dried fruits being on show.

I was also very surprised with the Green Tea pale ale – which helped cleanse the palette after some of these heavy, stronger beers.

As our party’s tastings were on the large side, I also tried the Coconut stout, which was sweet and smooth, and the excellent Port barrel-aged Berliner-Weisse, which I wish I’d opted for myself!

The one I could not deal with was the Nanquim 3.0. Probably too early for that one. It was not drinkable enough for our party, and was the only beer we left to the drip tray.

After all these beers, it was time to visit the Pedro Limao restaurant for it’s tasting menu.