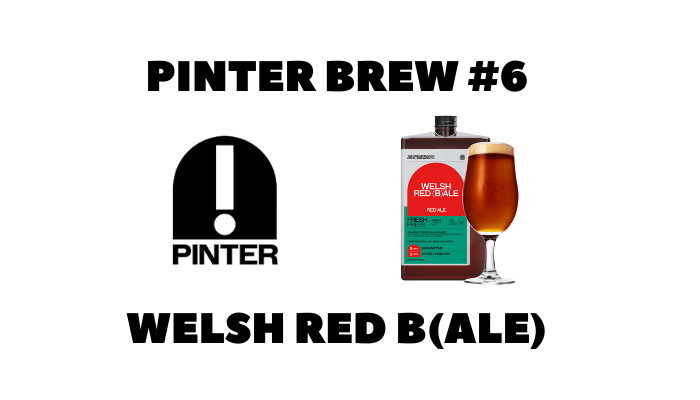 I had now brewed several times with the Pinter brewing kit, and felt like I’d had more success with darker ales.

I also wanted to experiment with bottling to reduce wastage as well as slow down my intake.

I quite fancied brewing a classic British style so I chose the Red Ale. Many of the previous brews I’d brewed with the Pinter were tending on the drier side, so my thoughts were that a malty red ale would make a welcome change.

The fresh press pack was named ‘Welsh Red B(Ale)’ and was available during the European Championships, alongside an English Pale Ale and a Scottish Best Bitter.

This brew all went to plan, and the result was probably one of my favourite brews so far.

Initial thoughts were interesting, and by the second pour it was coming out great, with a nice thick head. You’d have been glad to be served this in a pub, but maybe without the haze.

I know some perform a ‘cold crash’ where you place the whole vessel in the fridge in an attempt to stop the brewing process but I did not have the fridge space to do so.

I enjoyed it with fish and chips from our local mobile chippy which visits our road on Friday nights and was joined by a neighbour and they gave the beer a thumbs up.

Mrs Bacchanalian was less enthusiastic at first, with her comments being, “It’s a bit watery but quite nice. I like the end taste.”

This malty brew had good balance with caramel, fruitcake flavours and a strength of around 5%.

This time I bottled some in some swing top bottles I’d saved.

I dosed with these oval shaped sugar drops, which you just slip in the bottle and seal.

After bottling, I stored it in the fridge for two weeks and opened it after leaving to warm.

On opening, there was satisfying POP noise, with CO2 escaping. A good sign.

The beer was clearer, nicely carbonated and still tasted great. A success in my book!

I’ll certainly be bottling the next brew which will be ready soon. The next brew is called ‘West Neuvo Lager’, which is stated to be in the California Common style (Think Anchor Steam beer). Also this week there is news that a new Pinter, currently called ‘Pinter 2’ will be released soon. There are no details yet, but so far, I am quite happy with the results I am getting with the Pinter 1.