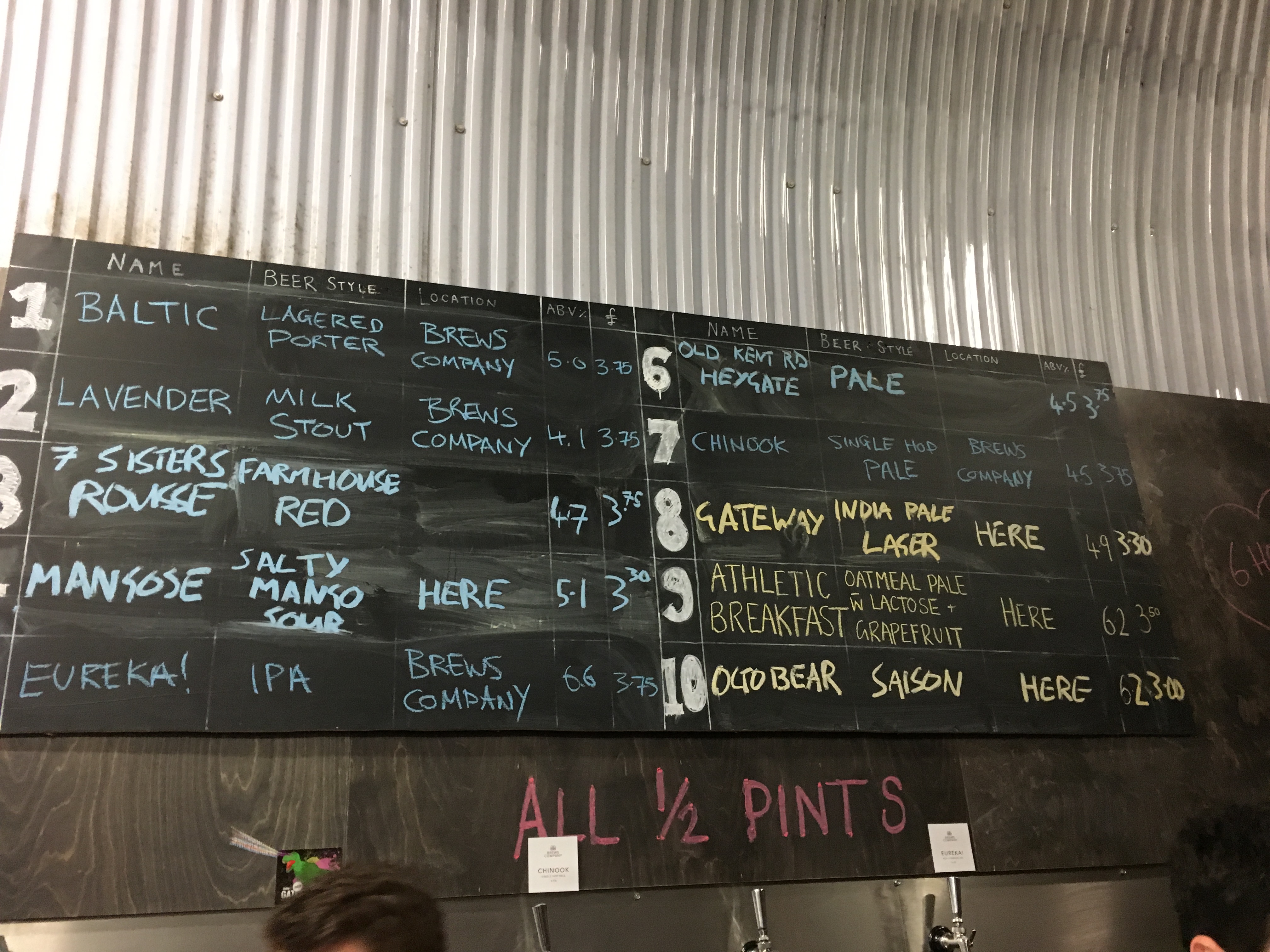 The ‘Bermondsey Beer Mile’ or BBM consists of a series of craft breweries hiding under train arches, which stretch from London Bridge through Bermondsey. I’ve heard lots of good things and bad things about it, but I’ve not had too many chances to visit in the last year. It just so happened that I got invited to visit a few on Saturday. The plan was already made, with some tables booked along the way and to end up in the pub for Eng V Wales in the 6 nations.

The first stop for us was Ubrew, who had lots of variety on tap.  Ubrew is a unique concept, one where novices can learn how to make their own beer, or more experience brewers can experiment. Many in the group like Old Kent Road’s pale, which seemed a decent pale ale to quench thirst at the start of a session. 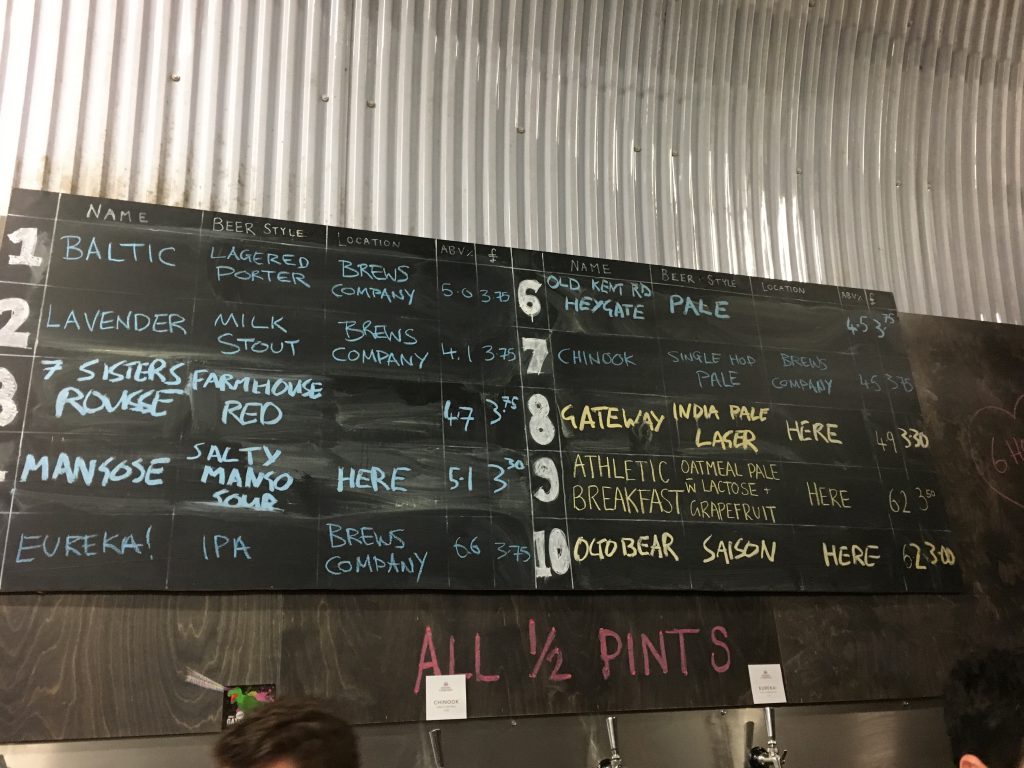 Continuing my small but lingering obsession with stouts, I went after the Lavender milk stout by Brew’s Company, which I thought was great. Certainly something I could sink a pint of, with the usual sweetness, and a very subtle hint of lavender. Did not taste thin at 4.1%, so well done to Brew’s Company.

UBrew also sell cans from the fridge, with their very own Octobear and Athletic Breakfast looking fantastic.

We then popped into the Bottle Shop, which has a wide selection of beers to take away. Certainly would not traipse myself down here to get beers though, but still great if you are a local or after certain rarities I imagine. There is a decent sized upstairs area which when I was there had decent beers on tap from Pressure Drop. I tried the Domino Topple and the Enz IPAs, American and Southern Hemisphere style respectively. I’ve not had many of the pressure drop beers recently, but maybe that needs to change, especially when it is this fresh.

Next on the list is Southwark Brew Co. which is usually either the start or end of the BBM, and is slightly different than most of these breweries in that it has a lot of English style cask beer (Hoorah!). Peter’s Stout was a rather epic Russian Imperial style at 8.9%. I only dared have a third of it, but that was enough to know it was excellent. If it’s good enough for Peter the Great, it’s good enough for me. 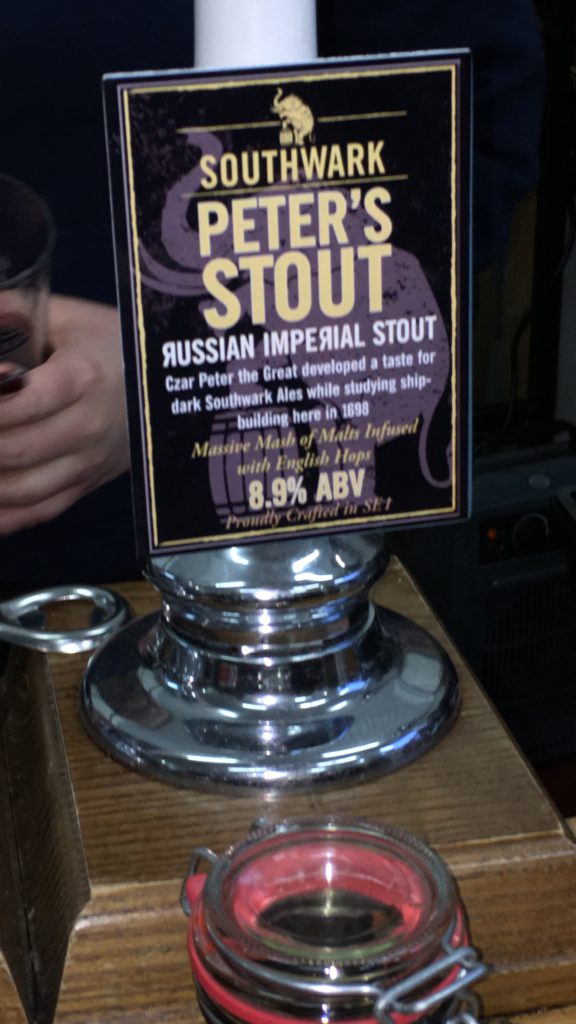 Several pints later (‘Gorgon’s Alive’ and ‘Stiff Upper Lip’) in the Marquis of Wellington, I’d had enough beers to think the sign below was an actual beer name, so after the game I decided to call it a night to forage for sustenance. 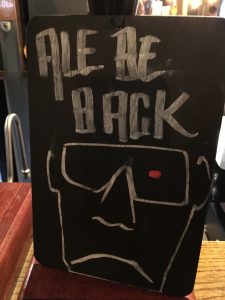 I will certainly be back at some point, certainly when less likely to catch frostbite. I’d love to check out some of the others on the mile, including Kernel, Anspach & Hobday, Fourpure, Brew by Numbers and Partizan.