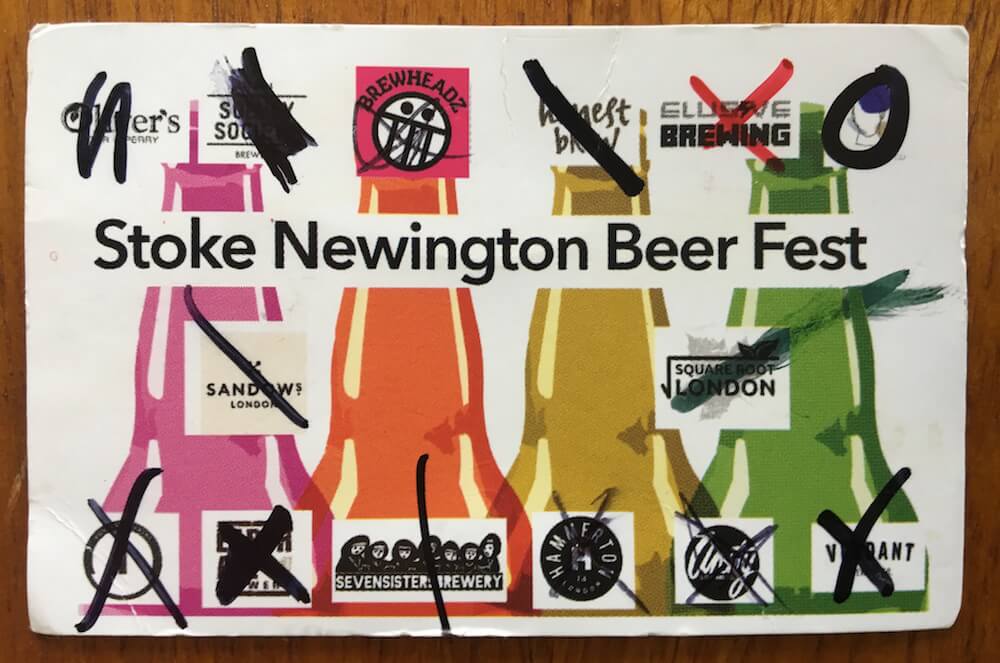 At the weekend I headed down to Stoke Newington’s Abney Hall for Stokey Beer Fest, now in it’s second year.

The beer festival is run by the local Seven Sisters brewery, who managed to fill the hall with local breweries as well as more unfamiliar breweries from further afield.

Upon arrival, each ticket holder was given a 1/3 pint tasting glass and a card to tick off a free beer at each breweries stand.

I was a bit thirsty, so made short work of Seven Sister’s Extra Stokey Bitter, which was also handed out upon entry. 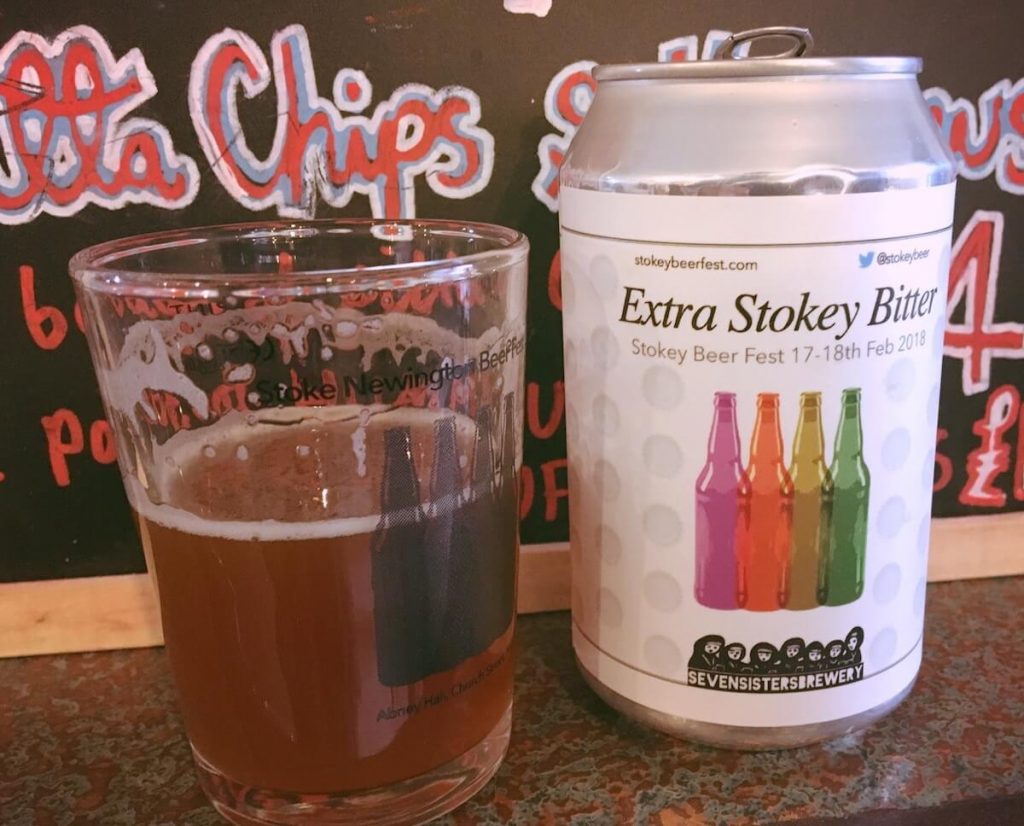 Yes, it’s an ESB brewed for the festival. I found it an excellent version of one of my favourite styles. I have another can of this for a later date which I’m looking forward to.

Beginning the Day with Fine Cider

My little group of intrepid beer tasters and decided to start with the cider, then work around the room back to the entrance. 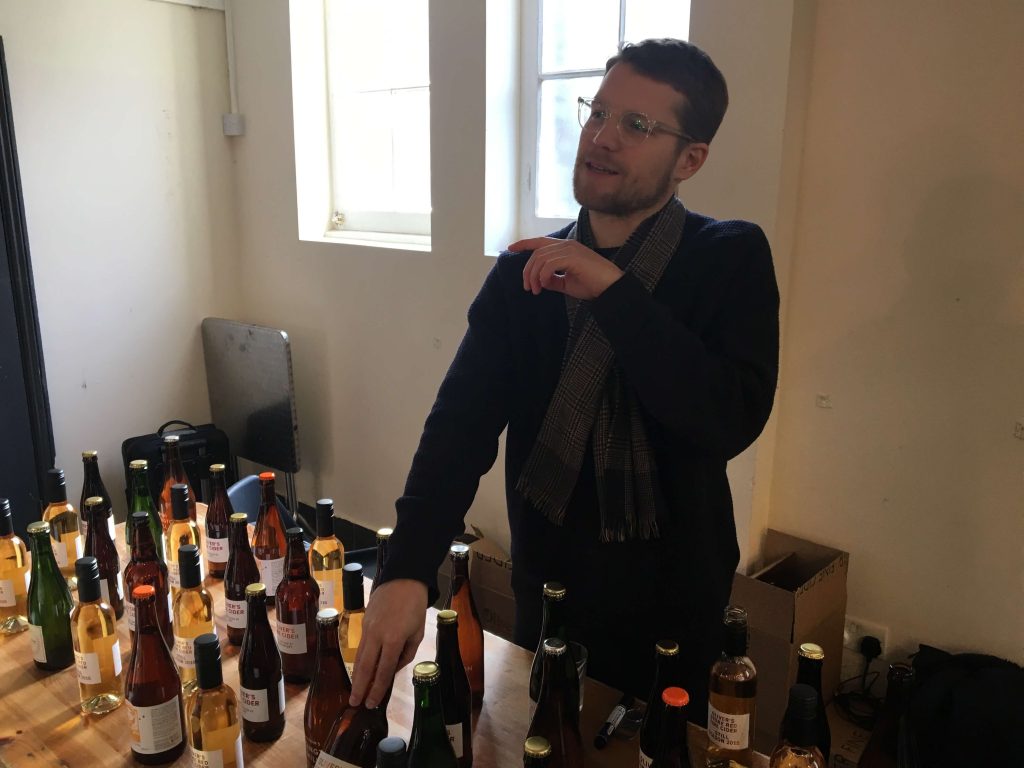 I have been keen to try Some Tom’s cider for a while and there were some interesting bottles on offer to taste and to buy from Fine Cider.

Verdant, from Falmouth, are one of the hottest breweries at the moment who specialise in hoppy beers like IPA’s.

I went for the ‘I Played Bass on That Tune’, which was banging – very fresh and deliciously fruity.

Hammerton, from down the road in Islington, were serving a batch of a new peanut infused experiment.

With my history of reactions to peanuts, the dark brew’s aroma alone was enough to ensure I avoided it.

Instead, I plumped for a taster of Baron H, an Earl Grey infused black IPA. I am partial to an Earl Grey and the flavour comes though here.

A classy brew. Maybe I am finally starting to see the point of the Black IPA.

I’m not too familiar with Moncada, but they had a great menu with some interesting styles. 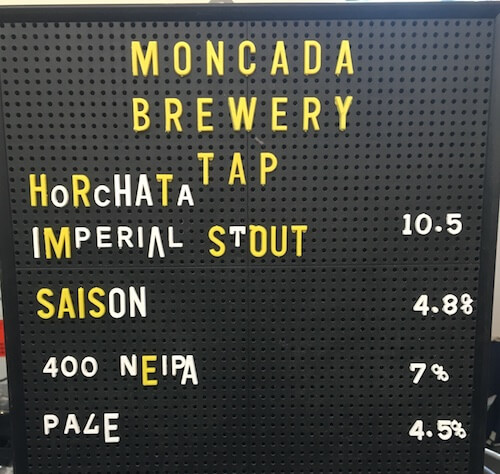 I went for the 400 NEIPA as these are good to try fresh.

Not my favourite style, but it makes a very fruity change of pace now and then. Reminds me of a passionfruit smoothie from Innocent I used to get.

I also tried a bit of the imperial stout, which stood out in hindsight as most of the breweries did not offer anything near this potent on tap ( a good thing all told ).

Now on to Affinity, a relatively new brewery just 1 year strong from the Bermondsey Beer Mile.

I went for the Breeze, a delicious saison with the coriander adding a hint of spice and with a zesty lime finish. One of the favourites of one in the group. The Champagne Berlinerweisse February was also delicious, delicate with the rose adding sweetness after the initial sourness. 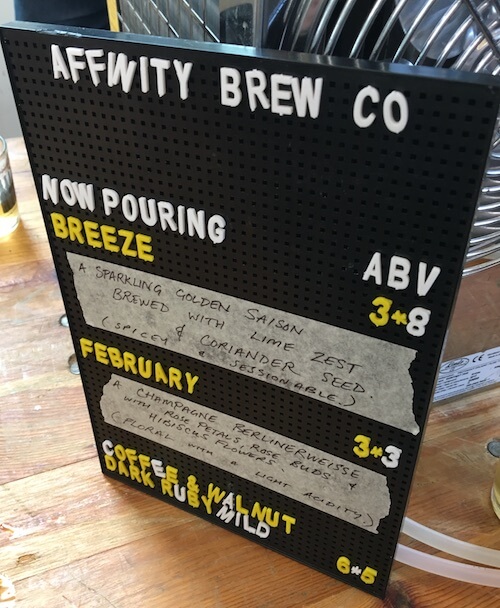 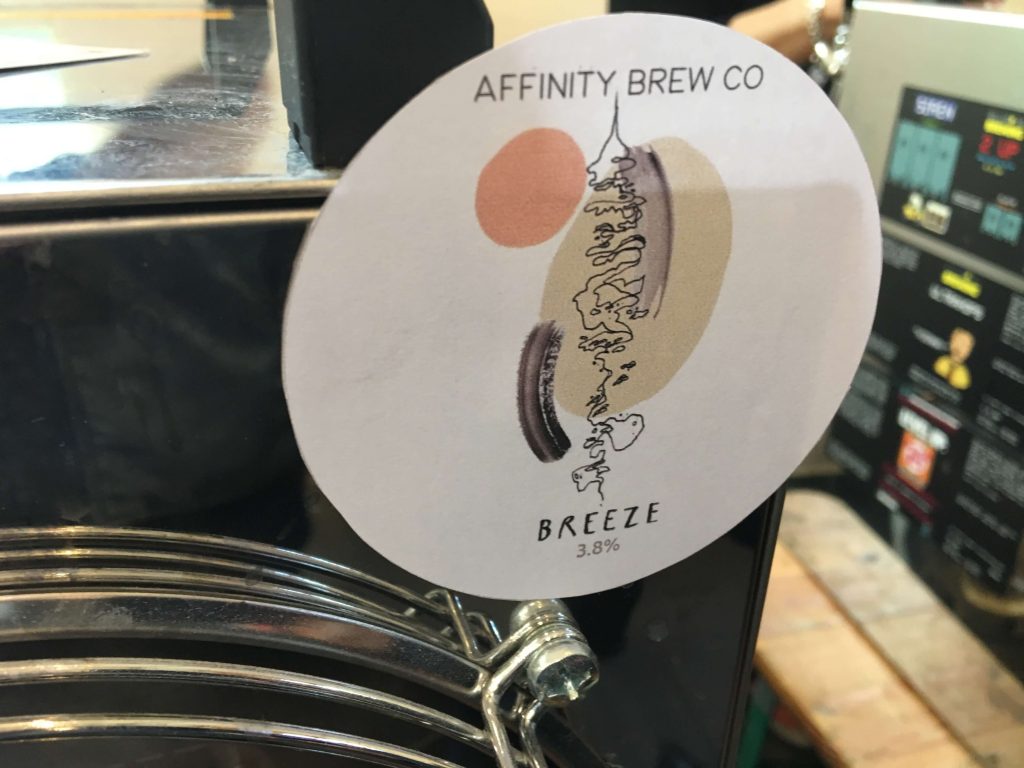 Elusive Brew had a wide selection of their bottled beers, a few collaborations on tap and a stall manned by the parents of the breweries owner.

I opted for the intriguing White Stout. I was imagining it looking at a white russian, but it actually looks like a pale ale bit with the flavours of a stout. 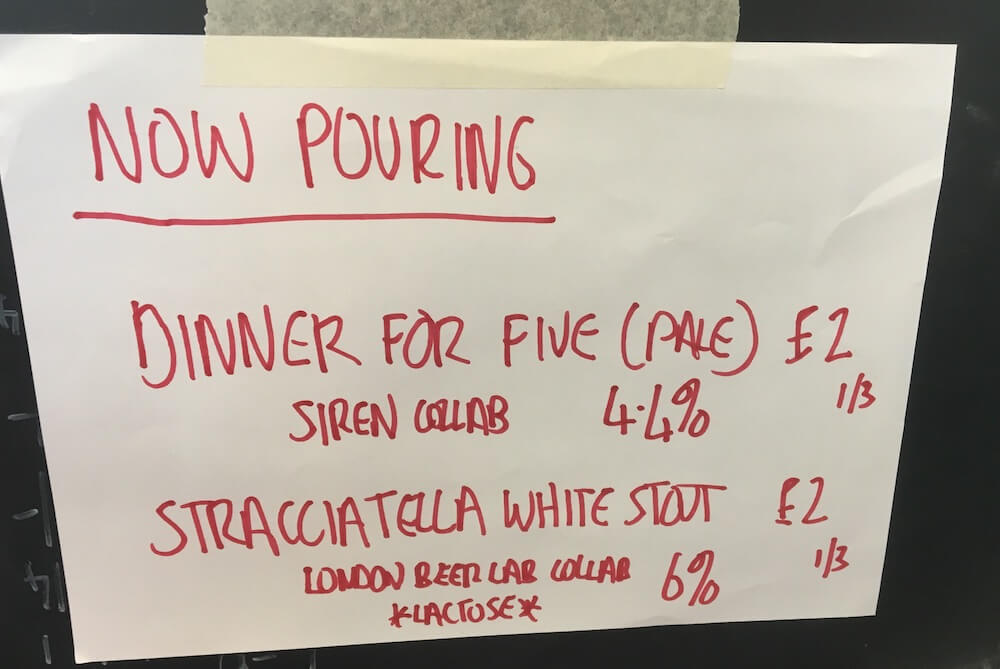 As a bit of a retro gaming nerd I ended up with one of each bottle to take away. 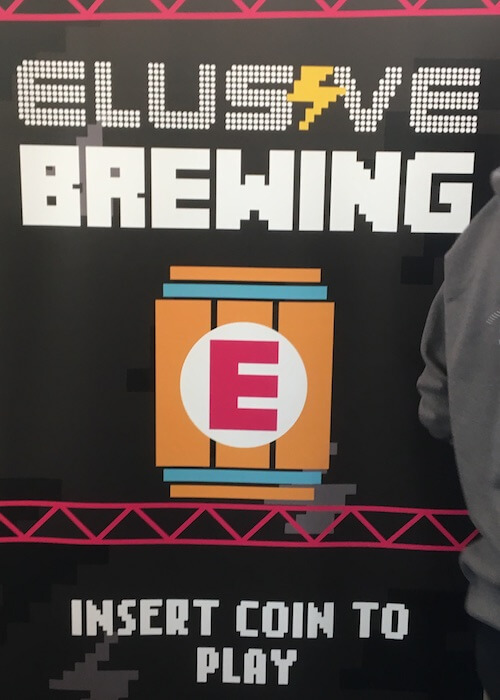 The fine folks from Honest Brew had some beers from a Basque brewery caled Laugar. I went for Moncada, an IPA. From one of my favourite foodie regions I’ve been to, so it’s no surprise to me that beers of this quality are being produced. 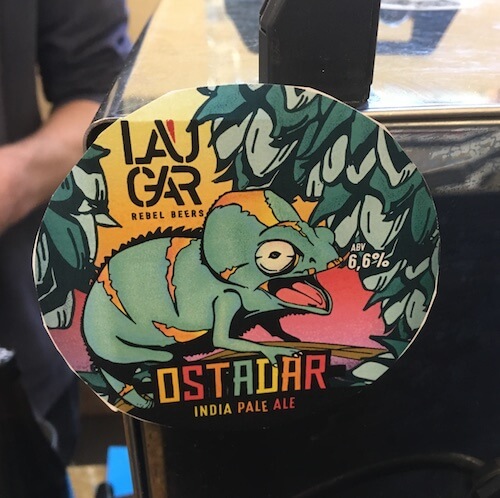 Brewheadz are based in Tottenham near the River Lea – just down the road from Beavertown, who celebrated a very successful 6 years of operation at the weekend.

I love a porter, especially at this time of year, so it was a delicious Kitchen Porter for me.

Unity Brewing had some very fresh cans of their Collision IPA available. 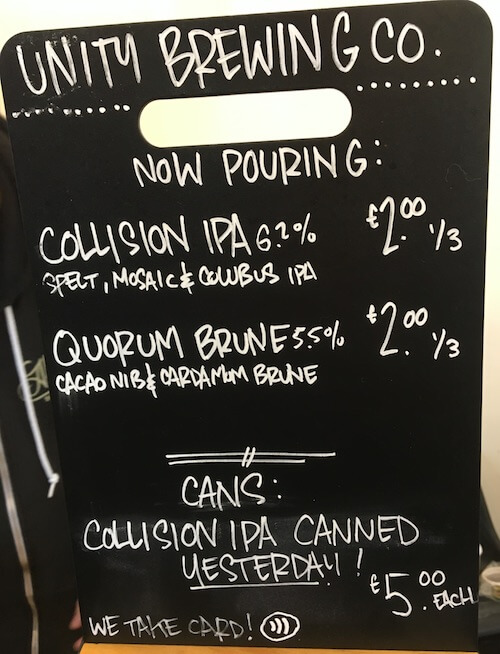 At this point my mind started to go hazier than dome of the beers I’d tried, but the Quorum Brune was next up.

At this point in proceedings, Das Radler was probably a good idea, offering refreshment without the ABV. This is a blend of Howling Hops Das Koolsch beer and Square Root Sicilian Lemonade. 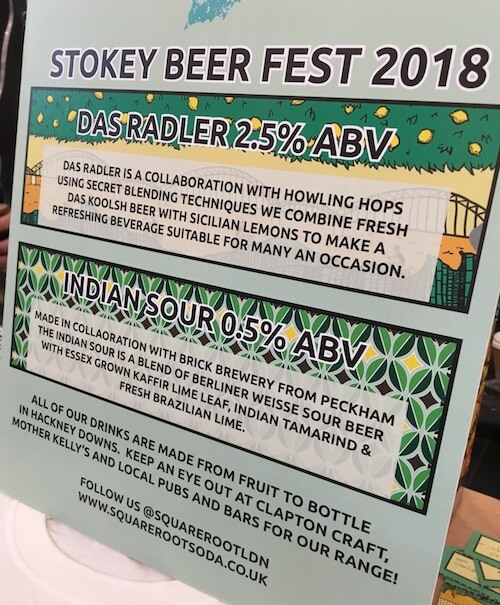 Next up was Elderwhite, an unusual sparkling elderflower ale from the Earth Ale Brewery. Classed as a Bière de Champagne, this was dry with high acidity. 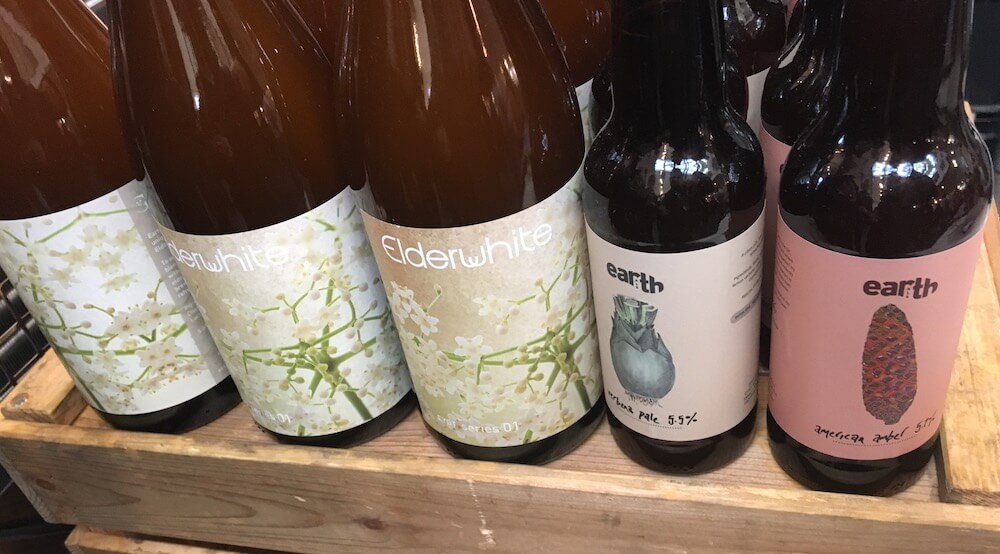 Next up was East London’s Solvay Society. 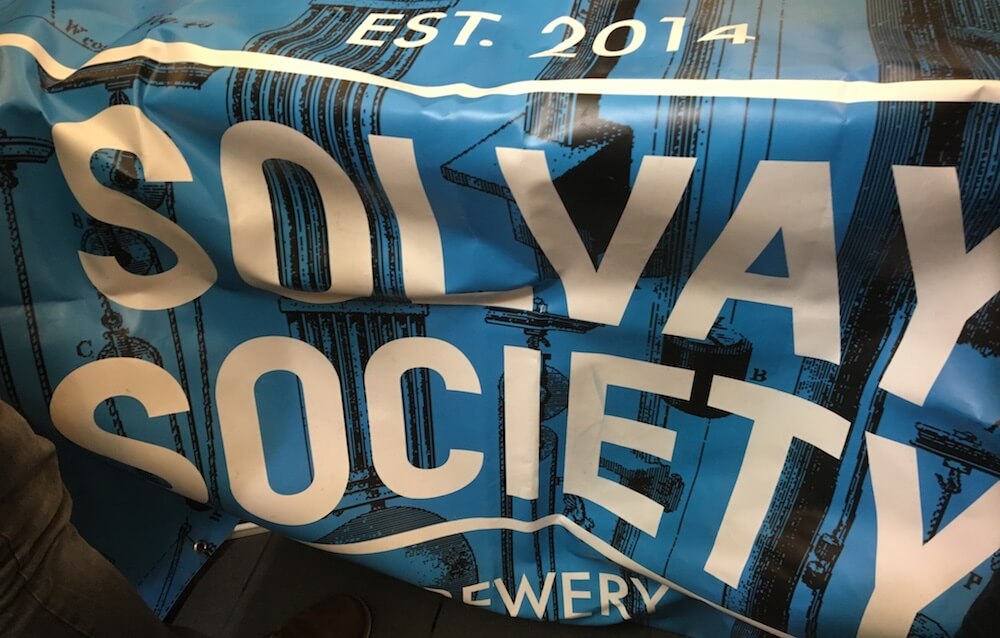 I’d forgot that this brewery specialises in bringing authentic Belgian styles of beer to London, then adding their own twist.

So, we had a choice between No Cloning Theroem, a hoppy dark ale and the Structure of Matter.  I fancied the darker of the two, and was not disappointed. 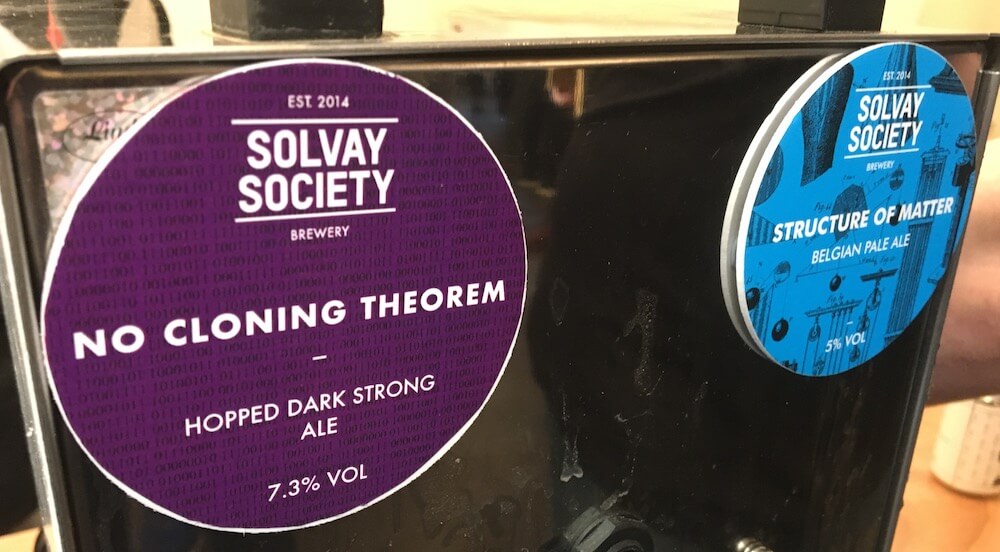 7.3%? Strong enough to send me past the point of no return

I like how at this festival there are some specialist breweries who are focusing on specific agendas, and not just producing one headline beer of each of the main popular styles.

Despite living right on Seven Sister’s road, I’d not actually drank many of their brews before. I was glad to have been able to make my way back round the event to try and focus on what they had on offer.

I think I asked for an ‘End of Thyme‘ and ended up with the ‘Citrus Session‘. Luckily, I seem to have had the foresight to purchase a couple to appreciate them further and be able to tell the two apart. I expect great things.

In my inebriated state I then proceeded to buy as much beer as I could carry, before heading down the road for food. 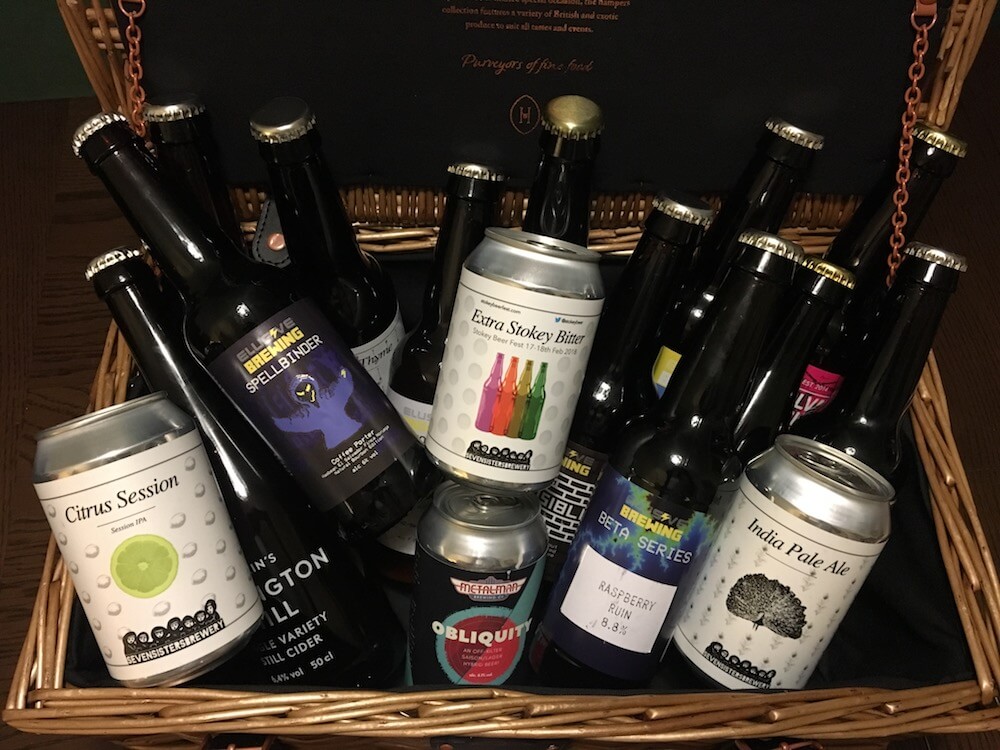 Some of the beer haul I somehow got home

I took my starving crew to ‘Stokey Bears’, One of my favourite burger joints, which promptly supplied a ‘Triple Threat’, a three-tiered burger of epic proportions.