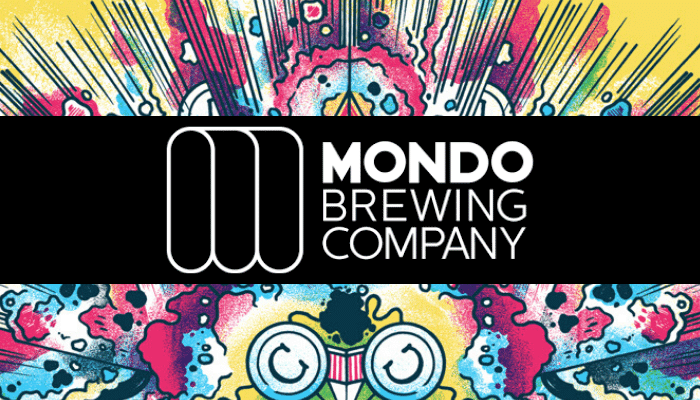 A few years ago I won some beers from Ora Brewing during #CraftBeerHour, so thought it was about time I tried again. I threw my hat in the ring for some free beers from Mondo Brewing Company during a recent Craft Beer Hour – but alas, I missed out.  My interest was piqued though, so I promptly ordered the four pack from Mondo to take part anyway.

I’d had one of the four beers previously – Dennis Hopp’r – but was keen to revisit. I was not disappointed – it’s a wonderfully balanced American IPA which delivers bags of flavour for a manageable ABV of 5.3%.

Machina is a drinkable, well hopped lager which slipped down easy. It’s good but not as memorable as some other craft lagers, like Keller Pils.

Pocket Cup is a ‘Micro IPA’ which fits the current trend of low ABV beers with a hoppy flavour profile. At 2.8% it’s a bit in between a non-alcoholic beer and something that can get you drunk. To give a fuller body, oats and wheat feature heavily in the malt bill. Refreshing enough for Summer or a cheeky lunchtime pint, but for me it’s a bit too light.

The West Coast IPA, Madness is a collaboration with Marble Beers and was the highlight for me. It packed a punch at 6.9% and had all the bitterness and piney flavours you want from this style.

All of the cans feature fantastic new artwork designed by Luke Drozd. 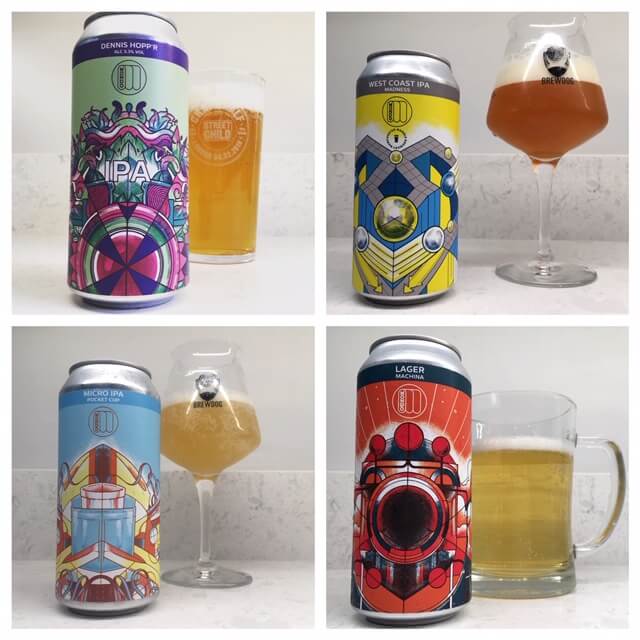 I got in touch with Mondo to find our a bit more about the artwork, future brews and how their team are coping with lockdown life. Tom Harrison, Mondo’s Events and Marketing Manager kindly provided answers.

Regarding the superb new label artwork, how involved is the brewery in giving direction to the artwork for each beer? How’s it been working with Luke?

Our beer names can grow out of anywhere, the relationship formed in a collaboration, an idea that gets written up on the office board, a chance conversation on the brew house floor. That tends to be where we start and we grow that into some form of art direction for Luke, usually linked to influences, artists, pop culture, that we like. Luke takes that initial direction and goes to work on a sketch, at that point we might make some changes before he inks it in and colours. It’s been great working with Luke, he’s very talented, multi-disciplined and puts up with our weird suggestions. Over the last 18 months we’ve built a great understanding with each other and he’s a huge part of Mondo’s profile.

You said that Madness IPA was your Mondo beer of the moment. I agree, this was fantastic! Very apt. Any other beers you are perfecting at the moment?

You’ll be pleased to know that this week we brew Spindizzy, effectively a rebrew of Madness, but with a different hop profile designed by Head Brewer Tom with a thumbs up from Joseph over at Marble. Madness was hugely popular and we’ve had a lot of call back to rebrew, so we’re giving the people what they want. We have a triple fruited gose in tank, brewed with Lanzarote’s Nao Brewery. Colouring In, an IPA in our contemporary house-style packages next week and we’ve got an exciting cause beer in planning with Hospitality Action.

How is the brewery coping at the moment, and what are the team looking forward to? I am missing the local beer gardens…

We’re ALL missing the beer gardens. Pubs aren’t just a part of our business lifeblood, they’re part of our individual and collective lives. The landscape is going to be very different. We’re working with reduced production, reduced turnover, with a reduced (furloughed where possible) team, with everything now going into can or bottle. We’re confident we’ll come through this, supporting our peers where possible, while protecting our team and we’re most looking forward to a crisp, cold keg beer in the sunshine.