Why Ora Brewing Brewed a Beer with Balsamic Vinegar 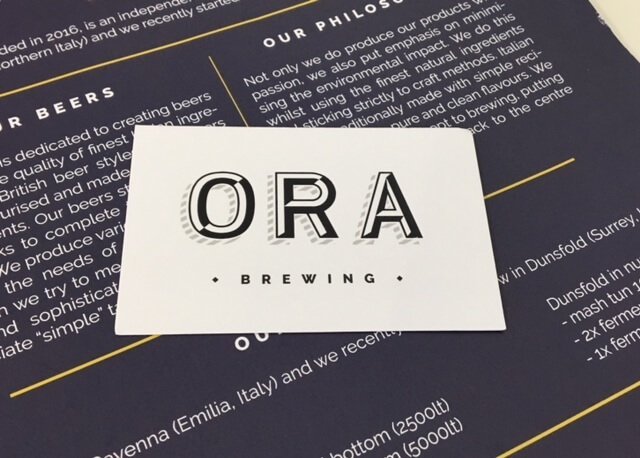 Every Tuesday at 9-10 PM it’s time for #CraftBeerHour to take place on Twitter.

Created by Tom Stapley, the idea of Craft Beer Hour is that everyone is drinks and discusses the same beers, at the same time.

Samples supplied by host breweries are sent to a list of twitter users drawn from Tom’s hat the week before.

Anyone who misses out and wishes to join in can buy the beers via a number of stockists.

I managed to get lucky; my name was plucked from the hat! 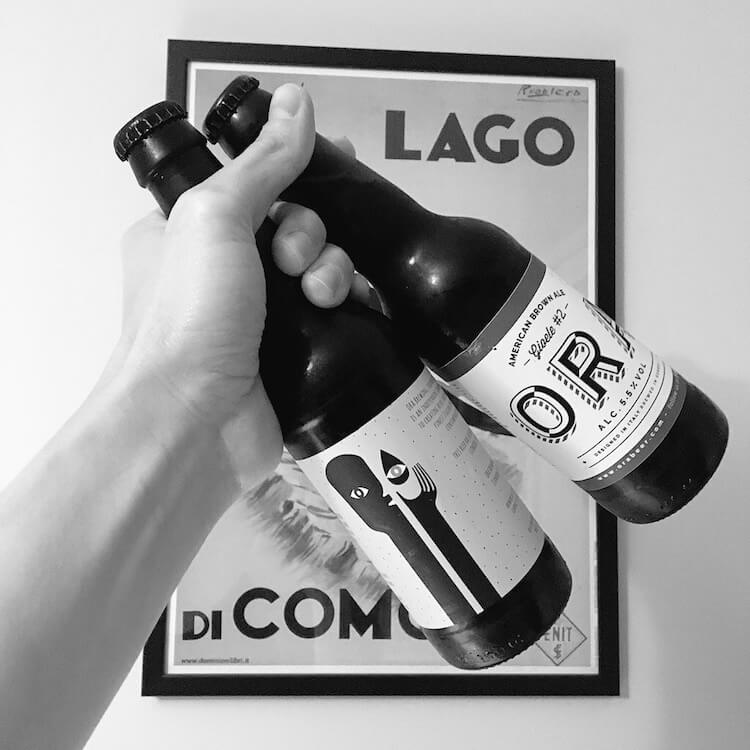 Although currently based in Ubrew in Bermondsey, the brewery originally hailed from Modena in Italy.

This Italian heritage is reflected in some of their recipes, with the region’s high-quality balsamic vinegar being included in one of the recipes.

The Balsamic – A Milk Stout 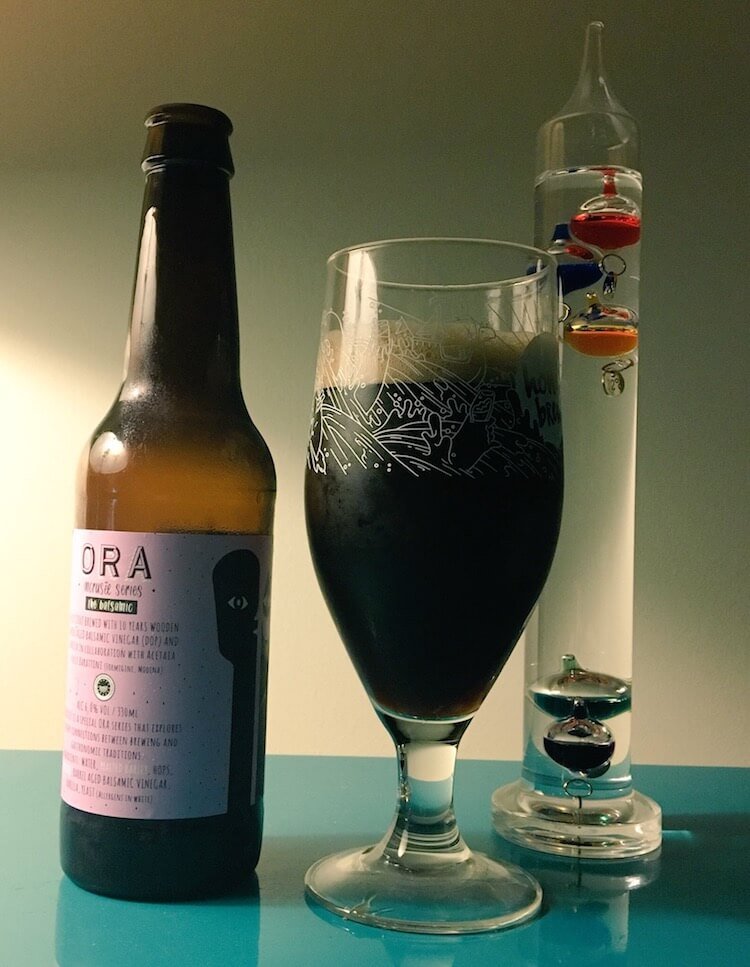 This milk stout is brewed with 10 Yr Old Balsamic Vinegar from Modena in Italy, as well as Vanilla.

Despite my fears, it does not taste anything like malt vinegar.

Certainly something you could confidently pair with a chocolate fondant. 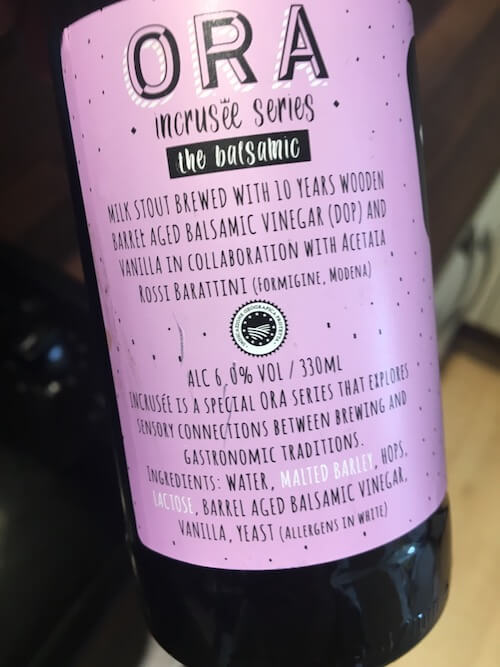 The Gioele – An American Brown Ale 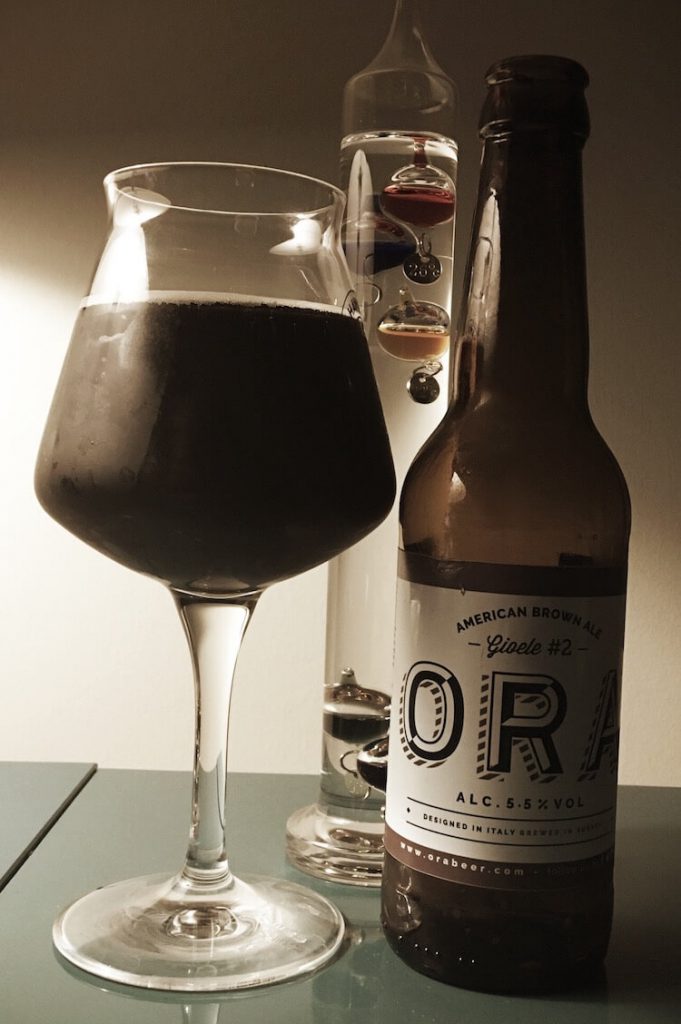 I found this spicy, nutty with the hops providing a bitter finish after coming through the fight with the intense caramel malt flavour.

For me, any more hops would probably ruin it.

I got in touch with Gabriele from Ora Brewing to find out more about the brewery and the beers.

I have read that you are currently brewing at UBrew in Bermondsey. How are you finding it there, and is the ‘beer mile’ where you wish your brewery to be located?

Gabriele: Yes, we currently brew at UBREW in Bermondsey. We really like the philosophy of the “open brewery”; we like the concept of brewing next with other small and bigger brewers, exchanging ideas on new products, and start building a network of breweries.

You can meet other brewers, home-brewers, beer enthusiasts and you can easily understand what Ubrew is about: honesty, creativity and fun together.

We would love to have our own space sometime soon, possibly in an area where we could help and contribute to the local community, possibly in the South East of the city.

How did you discover the balsamic vinegar which is used in your milk stout, and how did you include this ingredient in the beer whilst brewing?

Gabriele: We come from the city where the “black gold” (Traditional Balsamic Vinegar was born): Modena, in northern Italy.

Every child who grows in Modena is somehow exposed to this product, my grandfather used to make vinegar and he passed this tradition onto me. Every person who is originally from Modena has a few casks of vinegar in his house.

For us, the idea behind this beer was to link the roots and tradition of our grandparents with our passion, brewing.

When we start to think about this concept (which gave birth to the Incrusée Series), we wanted to brew a contemporary style of beer (like Milkshakes Porters/Stouts) using something really special. That’s why we thought about the balsamic vinegar.

It’s not the one you buy from supermarket.

Traditional Balsamic Vinegar is sweet, aged in barrel, very caramelly. It works very well with fruits and desserts (try it to with ice creams!) and we wanted to create the same sensation with a beer.

For us it’s all about exploring and pushing the limits, keeping a close connection with our traditions.

Which other ingredients are you or will you be experimenting with as part of your Incruseé series?

Gabriele: The Incrusée Series is all about creating beers that marry the quality of finest Italian ingredients with contemporary beer styles.

We are planning to create these beers with the most open-minded attitude. We are looking at local cherries from Vignola, for example, and blueberries from Frignano.

At the same time, we want to create beers that do not necessarily follow trends (our Gioele, an American Brown Ale that not many breweries make these days).

The current London market suffers a little bit of stagnation and poor self-renewal, we just want to create tasty beers that we would like to find around to drink. We are currently trying to discover the best combinations and the best solutions to brew them.

We love Double IPAs, Kolsch, Milds, Berliner Weisses, Bitters, Red Flemish, Gose. We just need to experiment and see where we get to with flavours and taste.

Could you tell me more about the story behind your beer Gioele?

Gabriele: Gioele is the son of our head brewer, Pietro. He’s probably the cutest baby ever (we’re a bit biased…) and we wanted to celebrate him with the best beer we could have done.

The previous “Gioele” was a Scottish style Brown Ale, inspired by a trip a few years ago to North Scotland, with less hop forward character and helped us to grow in the Italian and British market.

The actual “Gioele”, called #2, was brewed for the second birthday of Gioele, brewed with Northern Brewer, Amarillo, Ekuanot (in Dry Hopping) it’s a tribute of a style that dates back to U.S. home brewers who were inspired by British style dark ales.

How do you see the future of the brewery, is the plan to brew in both Italy and the UK, or just the UK?

Gabriele: The future of the brewery is to continue to experiment and look at opening a brewery with a taproom in London, to flourish rapidly and to create tasty and creative seasonal and special beers along a consistent core range.

We believe we have a solid offer for the UK and Italian [markets]. As we are a 100% London brewery with an Italian background and DNA, we think we will brew our beers in London since we want to keep a close relationship with the community in south east London.

Now all there is to do is taste the beers.

Thanks to Gabriele from Ora for taking the time to provide more information on the beers, and Tom for creating and running #craftbeerhour.

Take part in Craft Beer Hour by signing up for email updates.