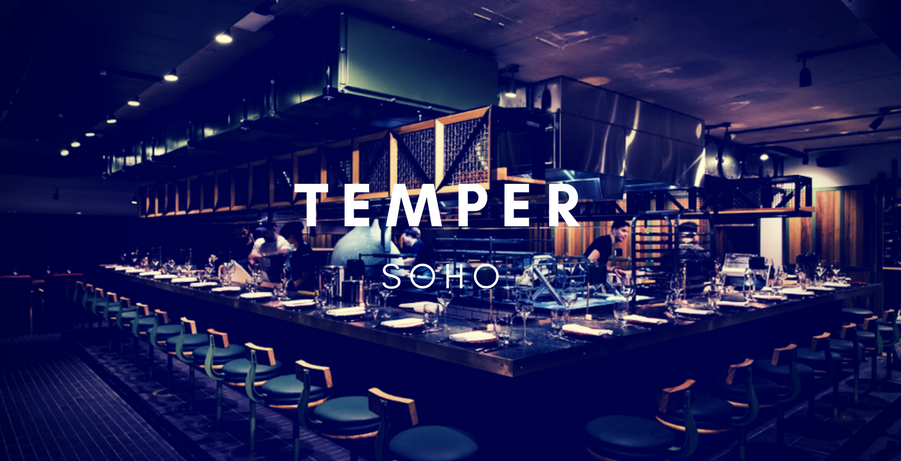 It’s that time of the year when the fantastic Masterchef is back on our screens, this time the celebrity edition of the show.

In the the first episode, the celebs cooked their own dish before heading to a professional restaurant to take part in a pro kitchen service.

One of the kitchens featured was Neil Rankin’s Temper in Soho.

I’ve eaten in a few of his previous places including John Salt and Smokehouse in Islington, and this place looked great from what was seen on the show.

Every dish looked tasty and interesting, and the meat was smoked – a big selling point in my book.

The menu looked full of guilty pleasures, like the ‘aged cheeseburger taco’, and the portion sizes seemed just right to order a load of different dishes.

So with that lunch was booked in for the wife and I the following day. The central kitchen means there are often a few seats available at the counter around it.

The famous Cheeseburger Taco was obviously the first thing ordered, and it tasted pretty much as epic as it sounds – succulent, with an intense depth of flavour. Delicious.

This was followed by the crab and picked onion pork skin taco. I’m not a huge lover of crab, so this was a bit of a revelation. It tasted so fresh and zingy, it was almost like a palate cleanser.

For meat we opted for the Smoked Goat and the Lamb Belly Masala, along with the green and the chipotle sauces.

Certainly the sauces were needed with the goat to enliven and provide vital moisture to the very generous portion – plenty to share between two. The pork, habanero and pickled onion sprinkles also made for a fun topping.

We weren’t as impressed with the Masala, and thought the slightly bland curry masked the tasty meat. Next time we’d go for another taco – the beef chilli and bone marrow our neighbours had looked pretty special, and the smoked lamb shoulder sounded good too.

See also  A Visit to Beavertown's Taproom in Tottenham

The side dish of corn with lamb fat béarnaise was super rich. With choices like this, as well as pure beef fat on the menu, if you are looking for healthy options you’d best go elsewhere.

As we were at the counter watching the action unfold, we could see a few of the desserts go out, and we weren’t going to leave without trying them.

We never usually order two desserts, usually sharing one between us. But an unfortunate accident involving some hot oil splattering the wife (she’s fine now) meant the staff jumped into charm-mode and offered us two desserts on the house.

We opted for their recommendations: the chocolate cookie and the kouign aman – a warm soft croissant pastry with butterscotch sauce and icecream.

The gooey cookie was served melted in it’s own mini pan and topped with a huge ball of smooth fior de latte icecream. This was probably one of the most decadent and delicious things I’ve eaten all year. There’s not much that would make you forgive an oil splattering but this managed it!

That’s not to say the sweet, warm pastry wasn’t good. It was. Two of the best desserts we’ve had, possibly.

I thought this place would do excellent meat dishes, but the quality of the deserts and the other dishes on the menu surprised and delighted in equal measure.

It is of no surprise to me that master glutton and half-decent food critic Jay Rayner loved this place, shame on me for missing his excellent review last year.

Temper is a ridiculous place: unpretentious, full of fire, smoke and fun.