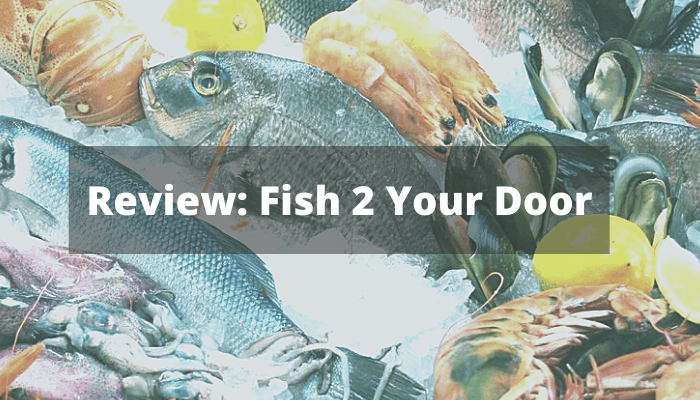 I was recently offered a thank you gift to the value of £100 – a gift I could choose myself! Having recently enjoyed a ‘meat box’ from Lake District Farmers, and with a resolution to cut down on meat in favour of more veggie and fish options, I thought I’d check out the ‘fish boxes’ on offer.

I found this round up really useful in my decision making and after reading the recommendations, I decided to go with Fishbox. Alas, after going through the sign up process on their website they informed me they were at capacity and not taking on new customers. Pretty sneaky, I thought, to get me to share all my details before letting me know…

So back to the search, and I came up with Fish To Your Door, promising a selection of freshly caught sustainable fish delivered to my door.

They are based in Sussex, not too far from us, which I liked, and the selection of fish on the website was really appealing.

I chose a selection of fish, including much-loved favourites, special treats, value for money and a couple that I’d always wanted to try.

I started with the Luxury Family Fish Box – it took up half my budget at £55 but promised a large variety of fish at good value. I also liked the idea of getting whatever was in stock at that moment.

The delivery arrived and everything was well packaged and nice and cold. However, the not-so-welcome surprise was that there were around 15 separate packages of vac-packed fish and none were labelled! The shellfish was easy to identify of course, but there were around 7 packs of similar looking white fish fillets, and I found it nigh on impossible to tell which was cod and which was monkfish. There wasn’t even a packing note included, and because I had ordered the Fish Box, I didn’t even know what I was expecting.

This was pretty frustrating – I was looking forward to looking up recipes and cooking techniques for particular fish but generally couldn’t tell what I was cooking until I ate it, sometimes not even then. I gave this feedback to the company and received a very serious and sincere phone call telling me all about the planned system updates that were in the pipeline. I didn’t know labelling fish was so complicated!

Despite this annoyance, I have been really impressed with the selection, generous portion sizes, and quality of the fish. I’m pretty sure I received more than what I ordered, including multiple portions of scallops and octopus, and a huge box of fancy tiger prawns. It has definitely pushed me out of my cooking comfort zone, as I recreated Basque style pintxos with the octopus and cooked up this squid, chorizo and chickpea stew one Sunday lunch.

I still have a couple of mystery fish packets in the freezer which I look forward to trying soon!

Beer and Chocolate Tasting with CAMRA

I take part in a beer and chocolate pairing session organised by CAMRA over zoom on a fine Easter Sunday.