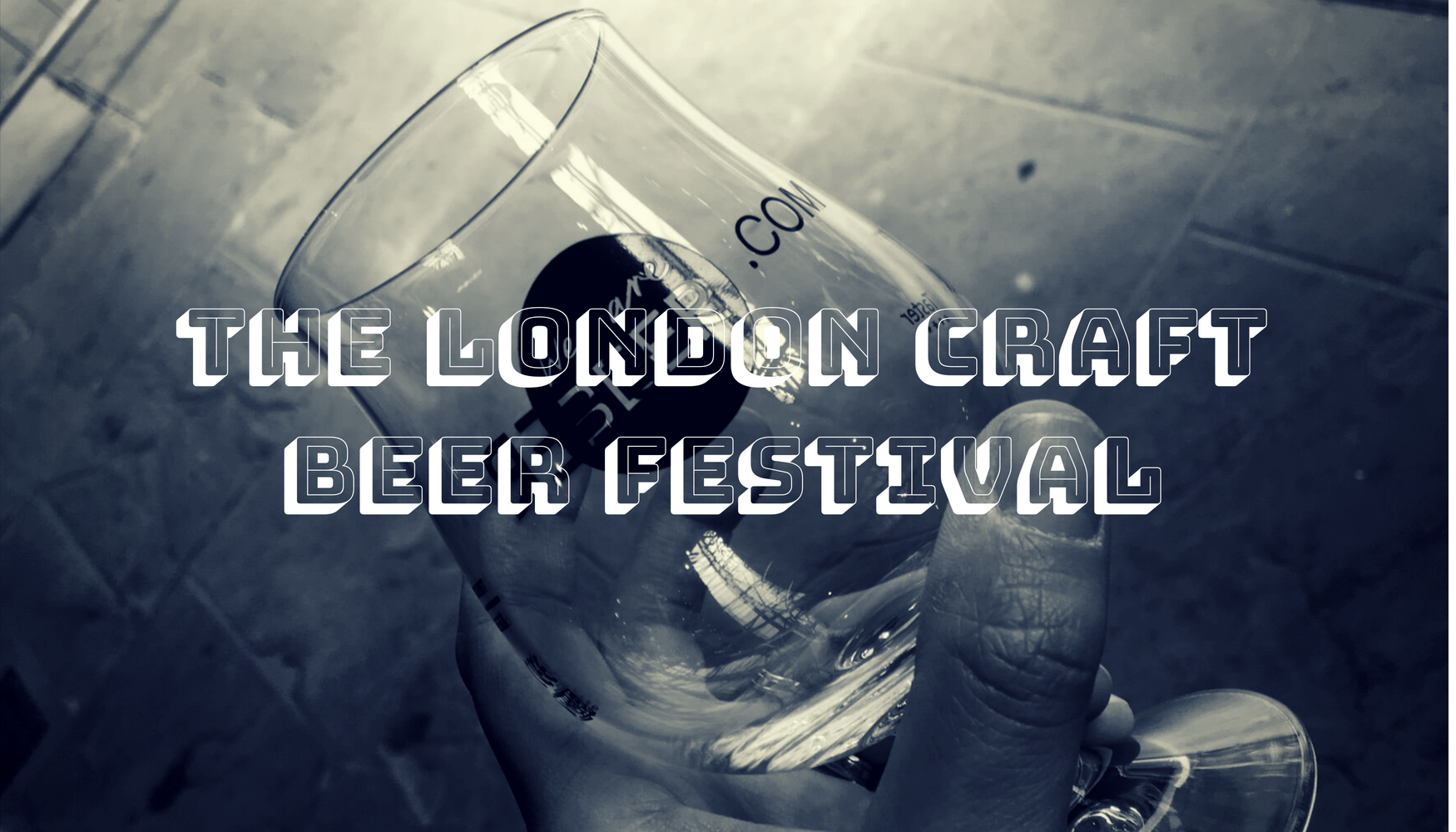 The London Craft Beer Festival is held annually at the Tobacco Dock, a large venue in London’s docklands area.

The event has been held for a few years, with the 2018 edition being a first for me.

I was joined on the Saturday afternoon session by Phil and Guilleme-Henri from French beer blog TopoftheHops.beer.

Read on for my thoughts on the festival. 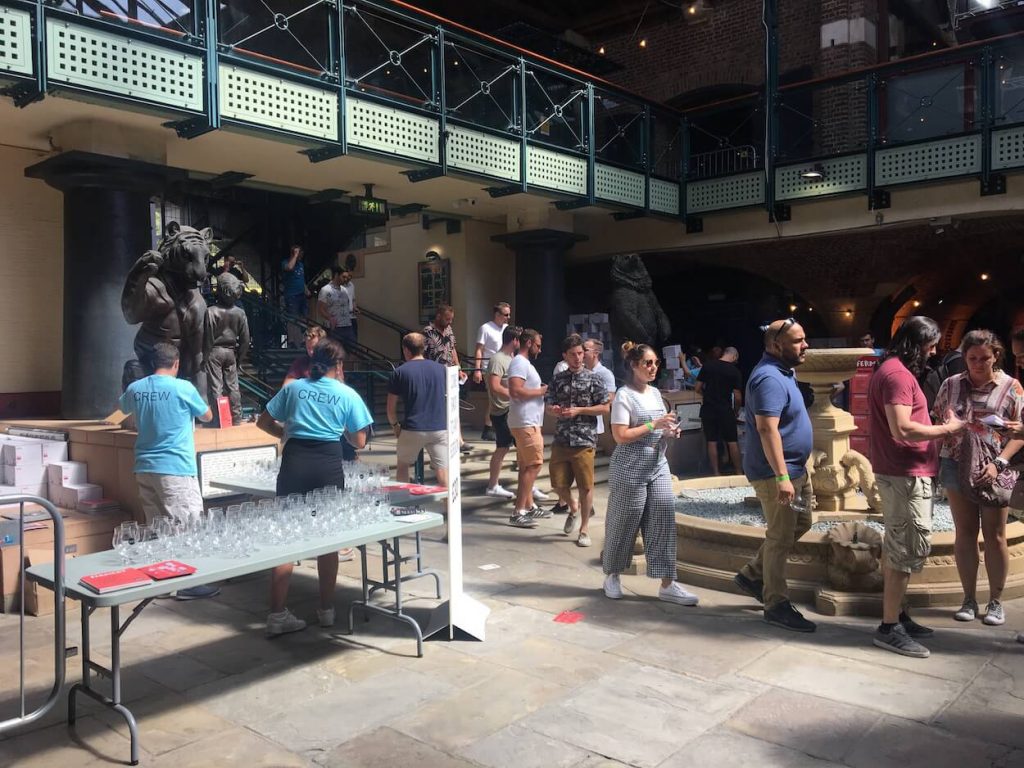 Upon entering the festival, each attendee is handed a glass to get started.

I had previously been the the Tobacco Dock for a food festival which was excellent, so I was excited to see what could be done with the space.

The venue itself is superb, with vaulted ceilings, nooks and crannies and a large amount of natural light. It was also easy to get to, with Shadwell Overground station being nearby.

The session started at 11:30, with most getting there early for the Saturday afternoon session. The queue snaked around the path for a good 400 metres, but it moved quickly as they gave out wristbands to those going in to speed things up.

Glass in hand, I was pretty damn thirsty as it was so warm.

Upon entry was certainly glad to begin the day with Cloudwater, handily located near the entrance.

The dank Brut IPA was great, with a dry, bitter refreshing finish. A good start. 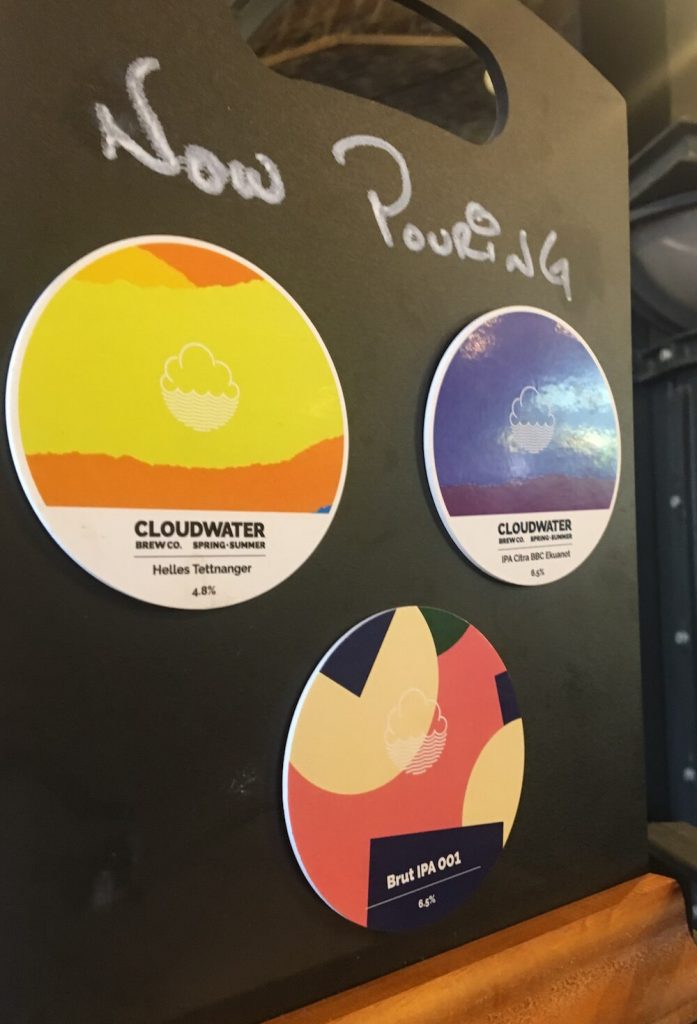 On the next stand to Cloudwater was hazy kings Verdant. Still being hot and thirsty, the Quiet Charge seemed to fit the bill perfectly. As expected, it was perfect. 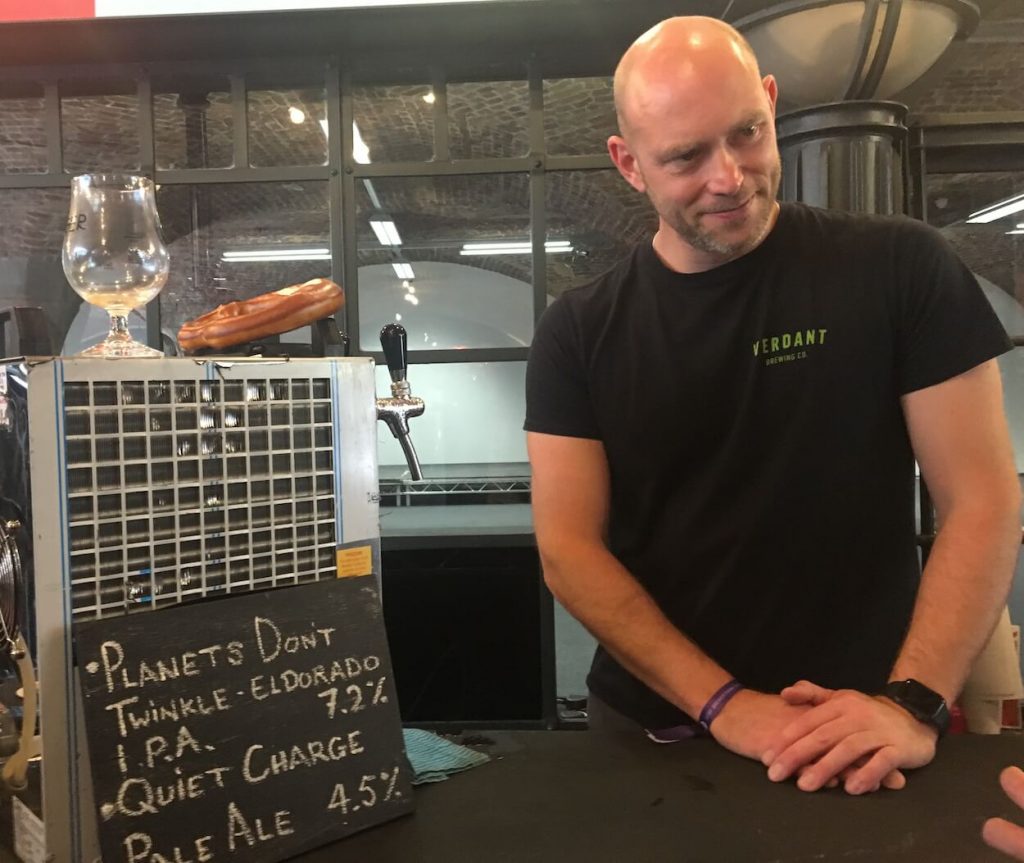 There were top breweries from around the globe, such as To Øl from Denmark. They had a remarkable Gose with Seaweed and Kelp called Ms. Teal on tap.

This unusual beer was one of my stand out beers of the day. 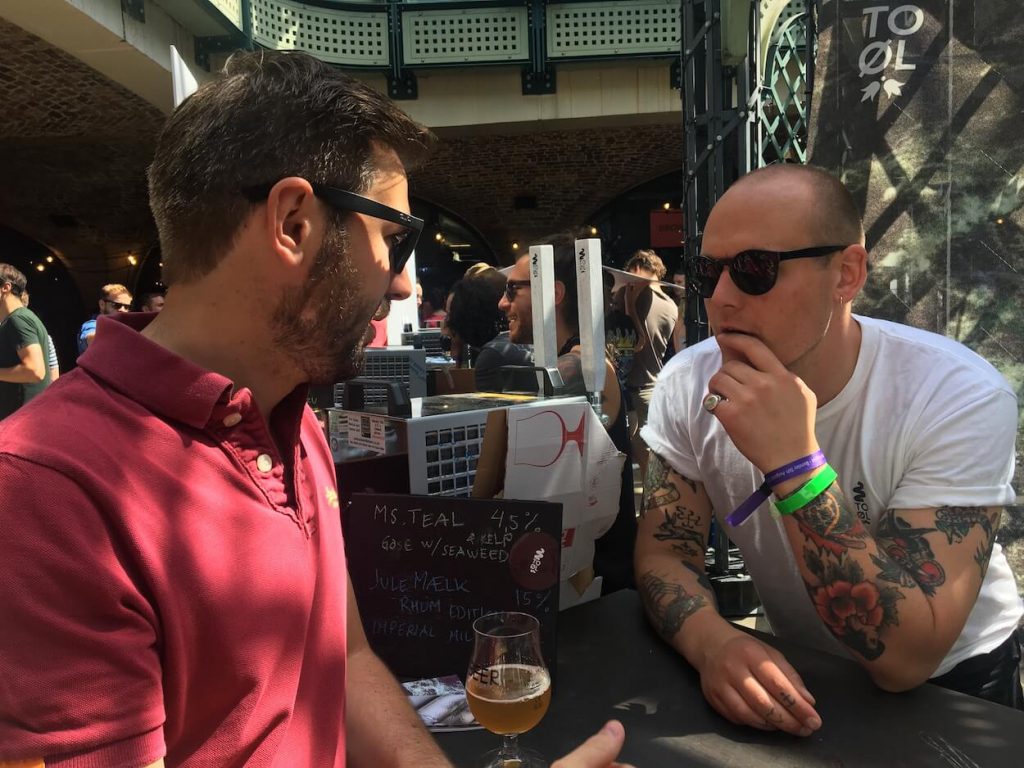 Just next door were Amundsen from Norway. Worryingly, one of their machines went on the blink, serving up some tepid beer, but that was thankfully remedied.

I thought the time was right for a New England IPA, so went for the Luponic Plague 2.0. Very juicy and sweet after the previous sour, but I would not drink a lot of it. An interesting brewery though to discover though, and will keep an eye out for their beers. 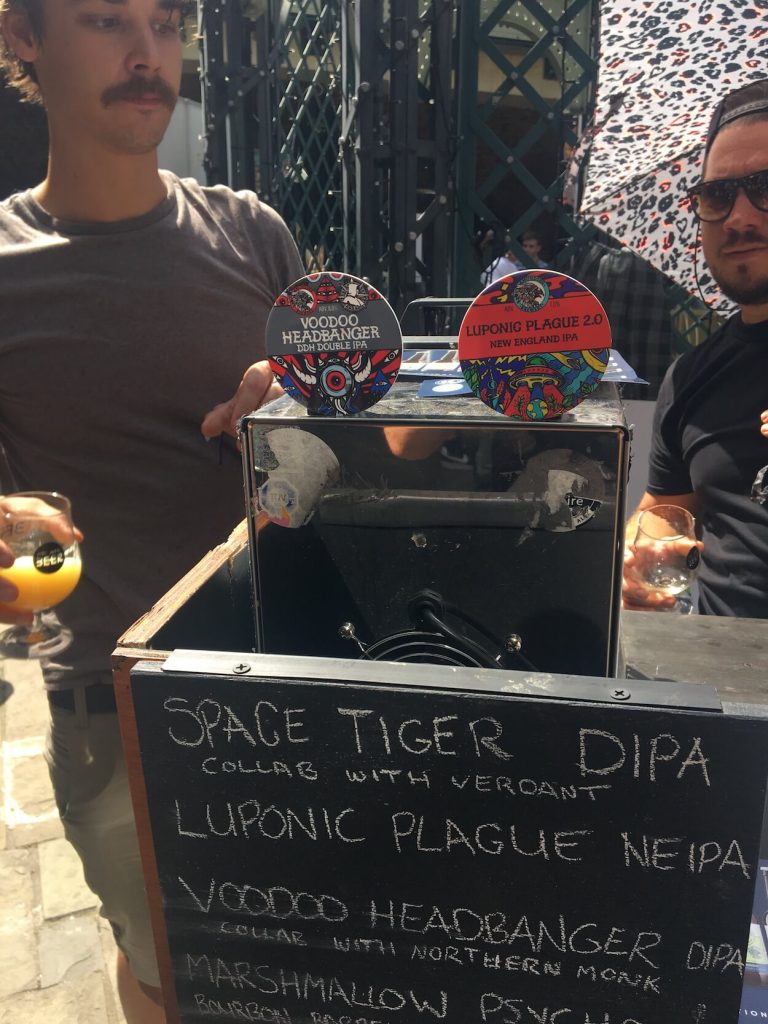 Next up, I wanted to check out the Cask Yard run by Fuller’s. This was especially interesting with one eye on the Great British Beer Festival (GBBF), which caters for traditional cask ale. It also takes place in the following week to LCBF.

The range of beers in the Cask Yard was outstanding, but it was mega warm under the arches. The beer seemed to be suffering a bit.

It felt like it was served maybe too warm, but that could also be due to previously drinking chilled keg beers.

I had a few different ales, and even tried a beer I know I like, but it was no good.

I even left without a try of the 2018 Vintage Ale. The shame!

I am hoping for better at GBBF. 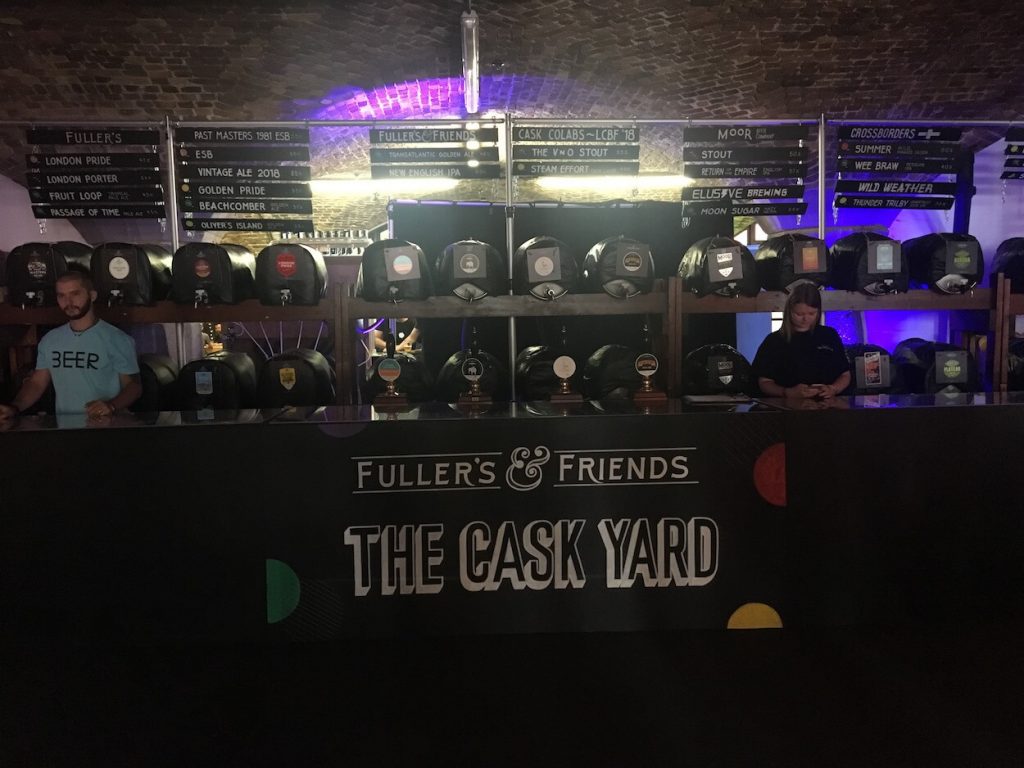 After that it was time to get back out in the sunshine and see Pracownia Piwa from Poland.

I was impressed with the Light Ale ‘Wawelove’, which was what you want a light ale to be. Clean, full of citrus with a dry finish. Great!

I have drunk a few Polish beers from the local shop, but they were mostly pretty boring lager compared to this. 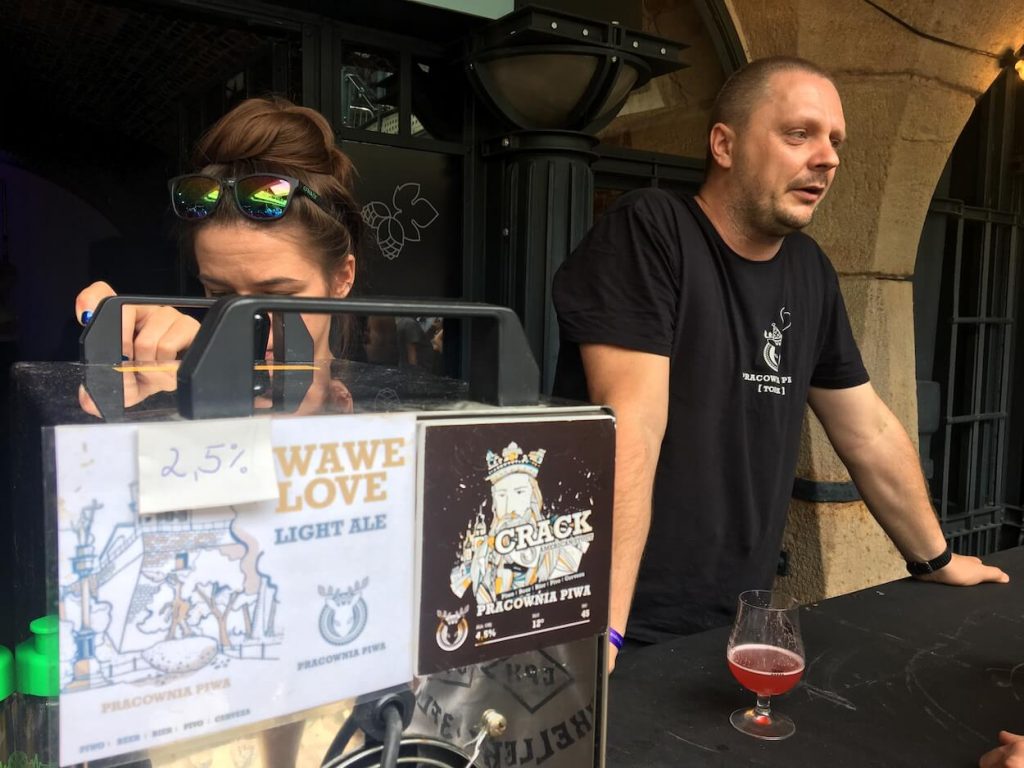 After this we decided to explore the vaults.

We got chatting to Olivier from MiniBrew, who produce seriously sexy homebrew machines. This piece of kit looks impressive in terms of form and function.

It’s currently available to preorder, and will be about a grand. 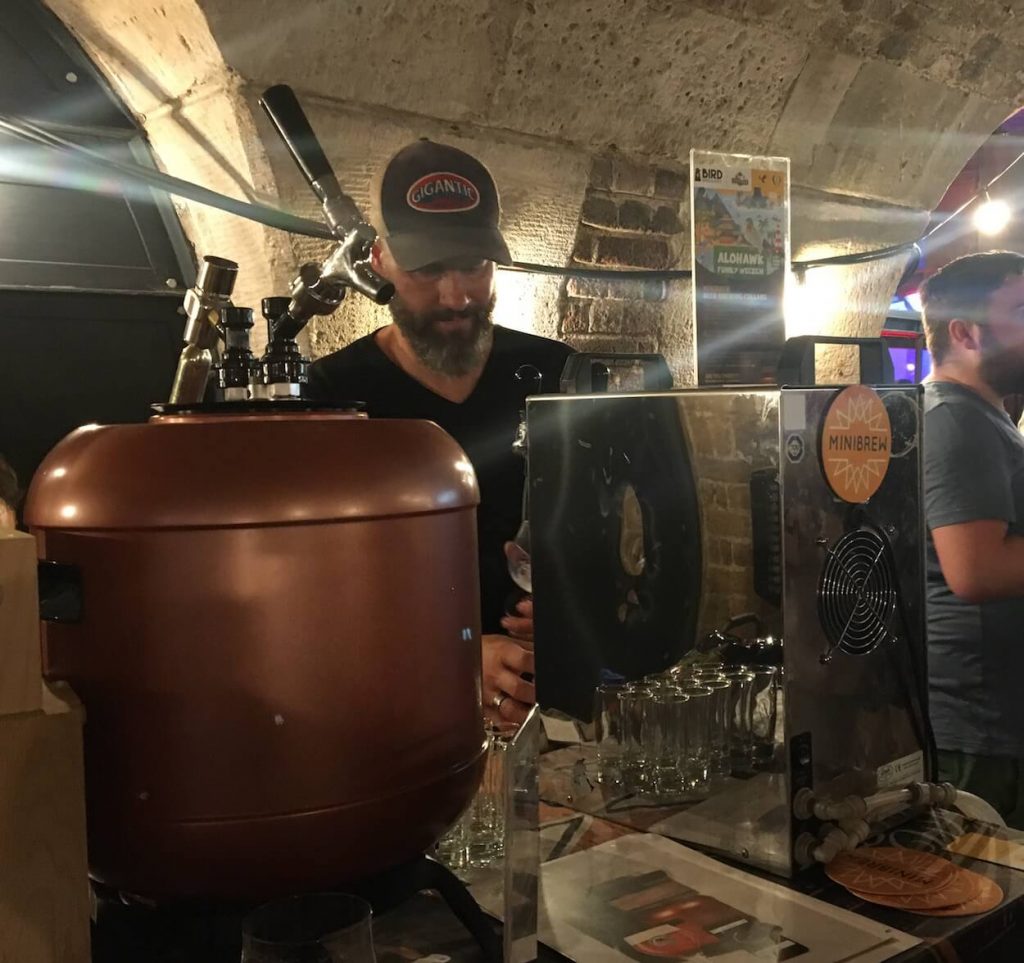 The beer made on the kit we tasted was excellent. I had best get saving!

How about the entertainment?

Well, nearby was the stage which has some chilled music playing. This chap was pretty good. There’s also a area which has a DJ playing some music, but it was not too busy at 1pm in the afternoon. 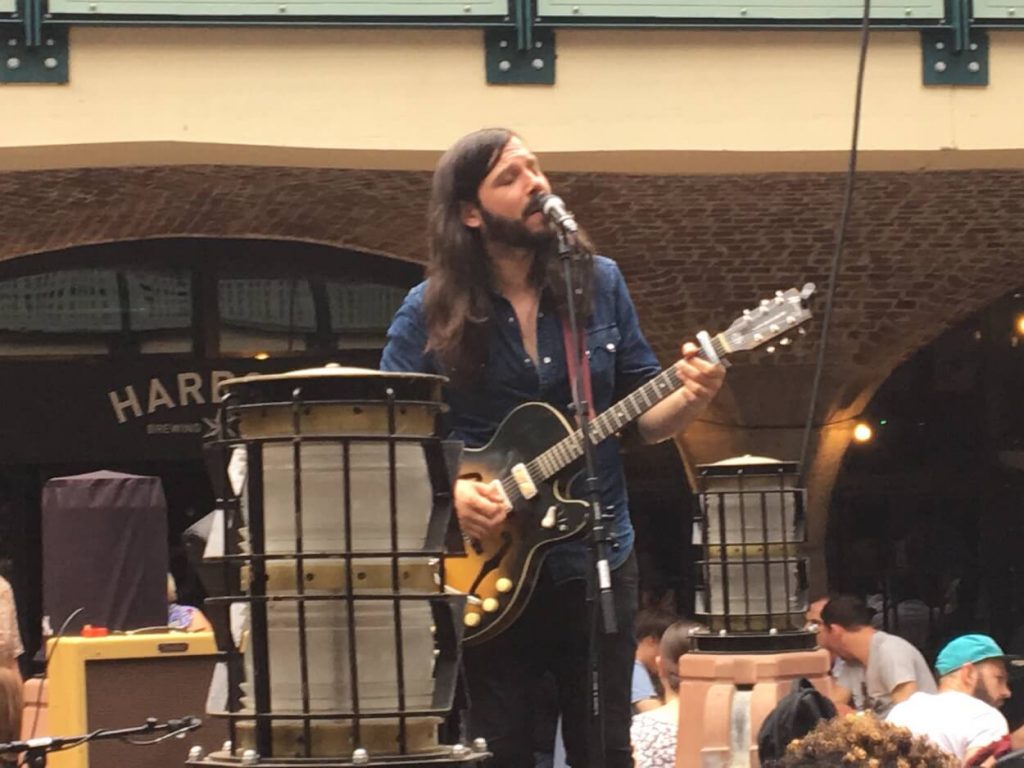 After a few more brews it was time to get some grub. I, of course, made the rookie error of not getting a good refill first.

Even so, The food area was impressive, with BBQ kings Pitt Cue joined by L’Onglet. 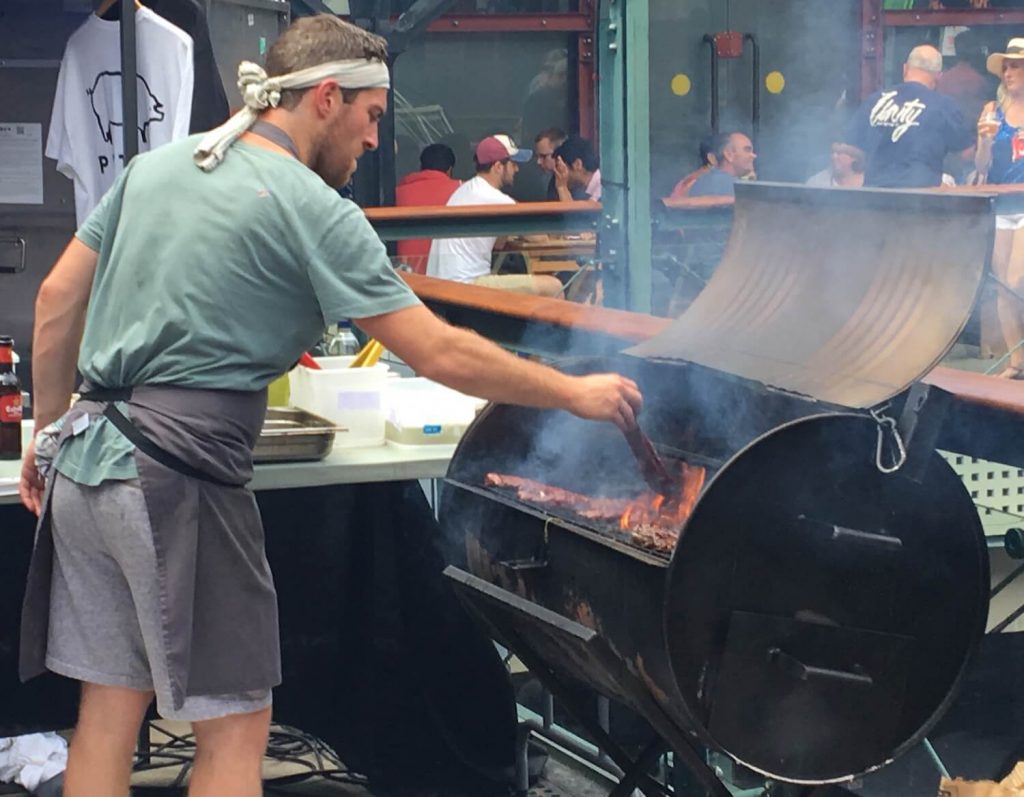 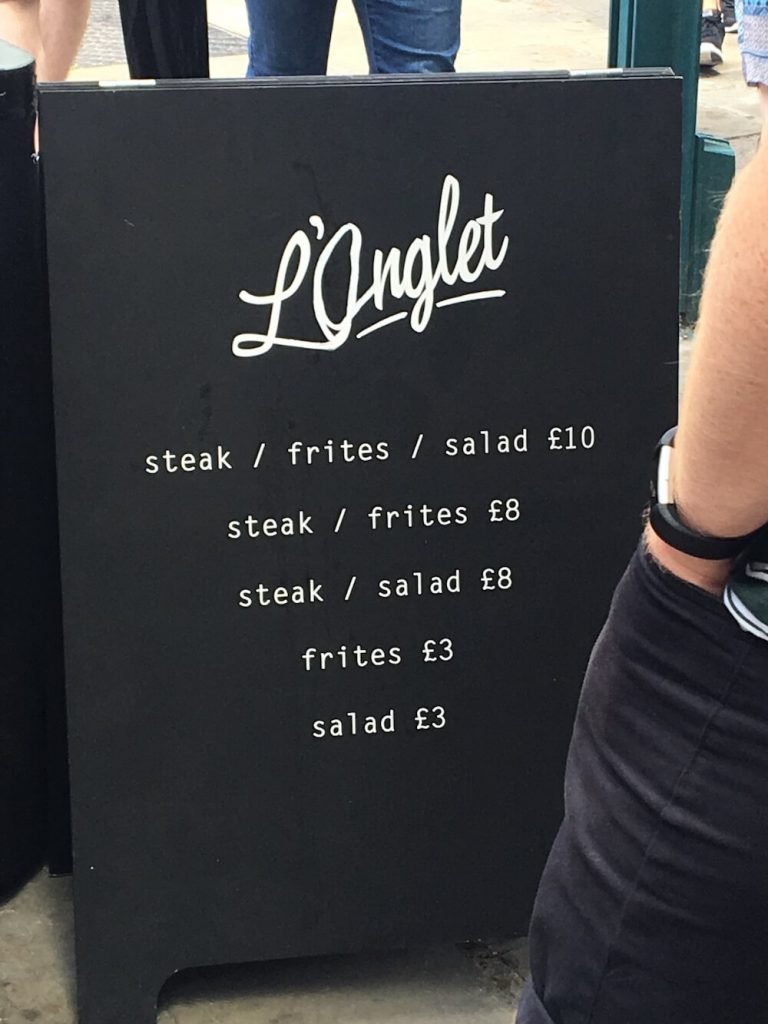 The prices were reasonable for good quality food.

The steak and vibrant salsa verde were excellent. Although the chips were not ‘frites’ they were still tasty too. 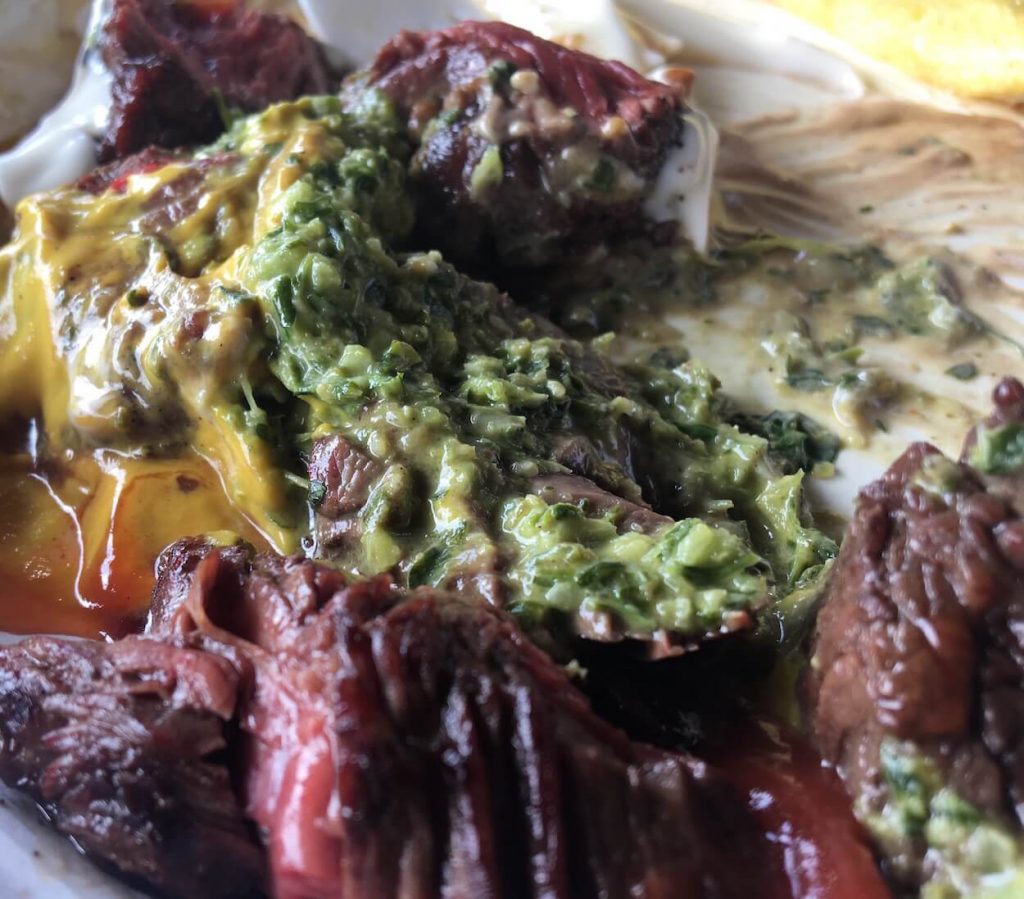 We made a plan to wash the glasses well, remove the taste of the most fiery free crisps in existence and head to the Wild Beer vault.

These chaps had a large range of the most interesting beers you’ll see on tap, with a focus on sourness, local ingredients and barrel ageing.

All the beers tried were all tasting amazing, with Summer Riot suiting the weather and time of year perfectly. 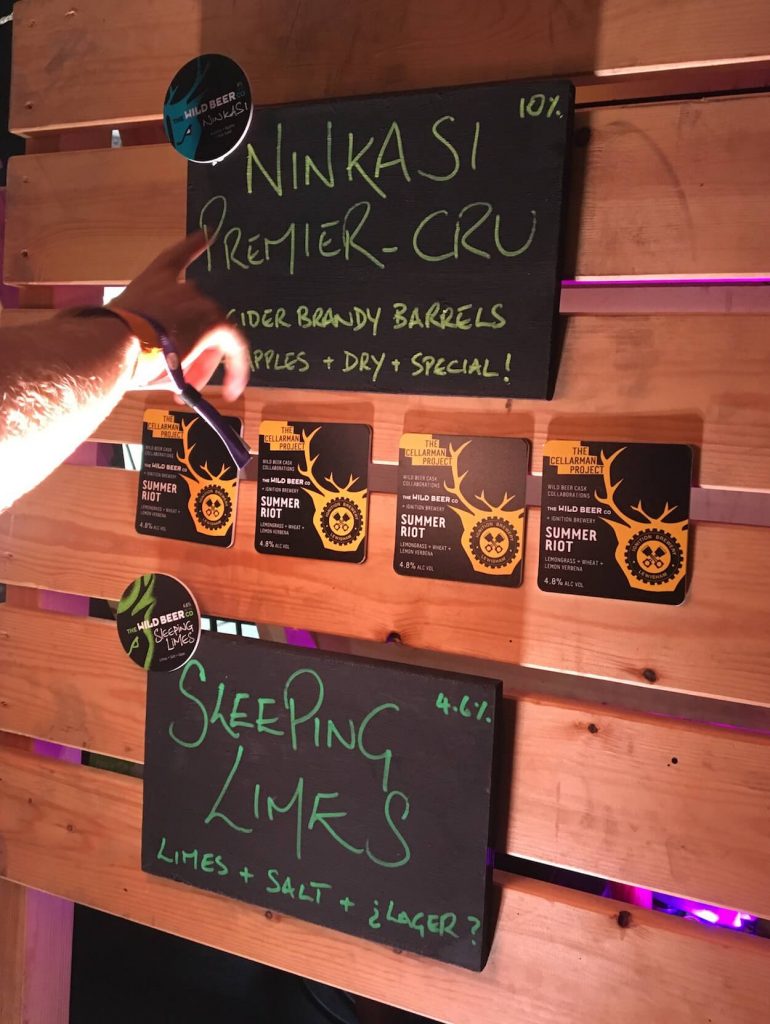 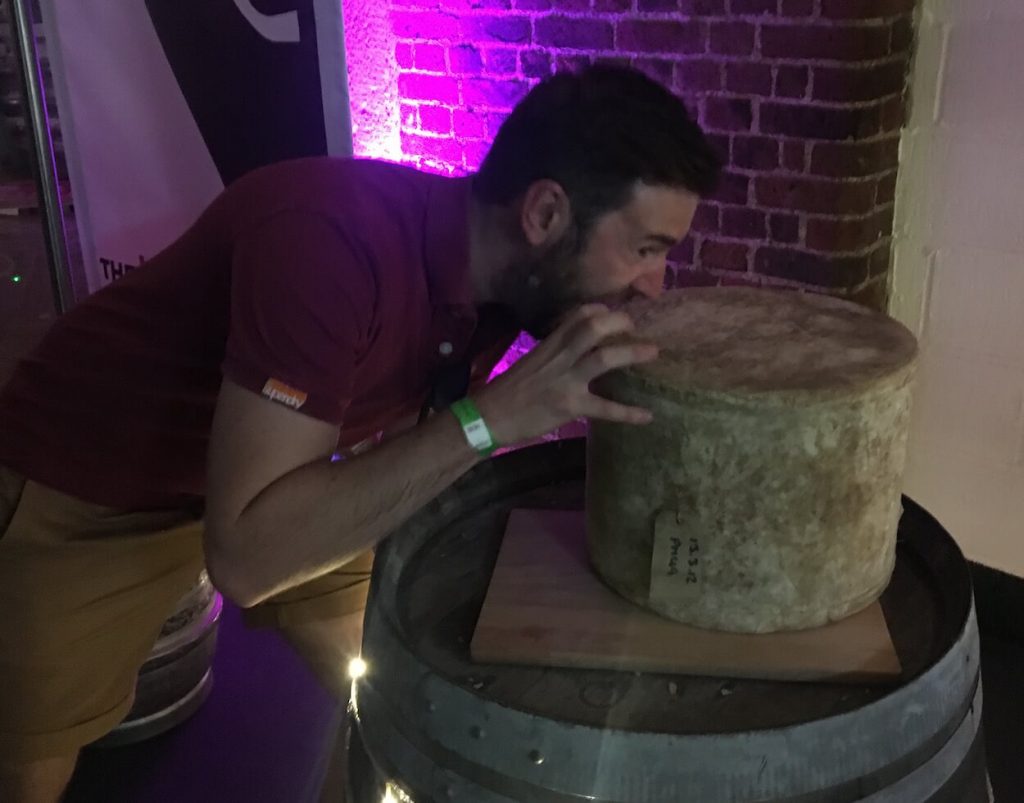 GH tucks in. You cannot keep a Frenchman away from cheese!

Northern Monk had beers from their ‘Patrons Project’ on tap, which feature collaborations with prominent local artists. All the beers were insanely good, and some of the best tasted at the festival.

I think Northern Monk has a new fan in GH, who raved about their coffee porter which was pouring. 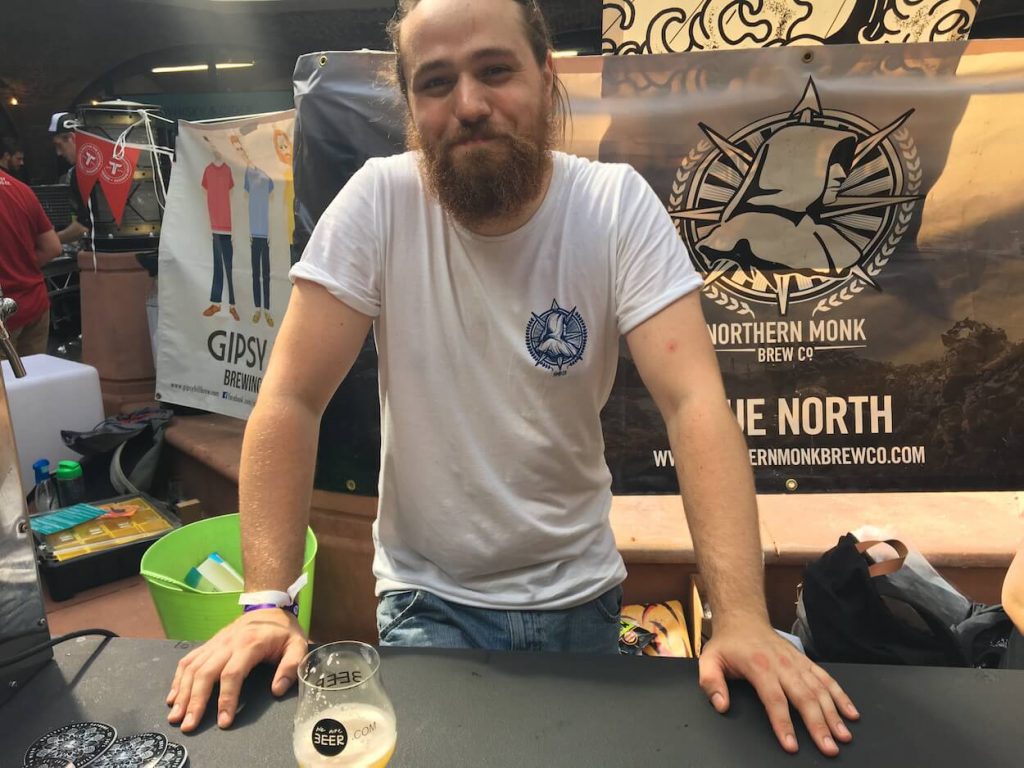 There were certainly flavoursome brews with relatively low ABVs being produced, like ‘Northern Lights’ micro IPA from Whiplash. I am enjoying this trend, especially during this heatwave. 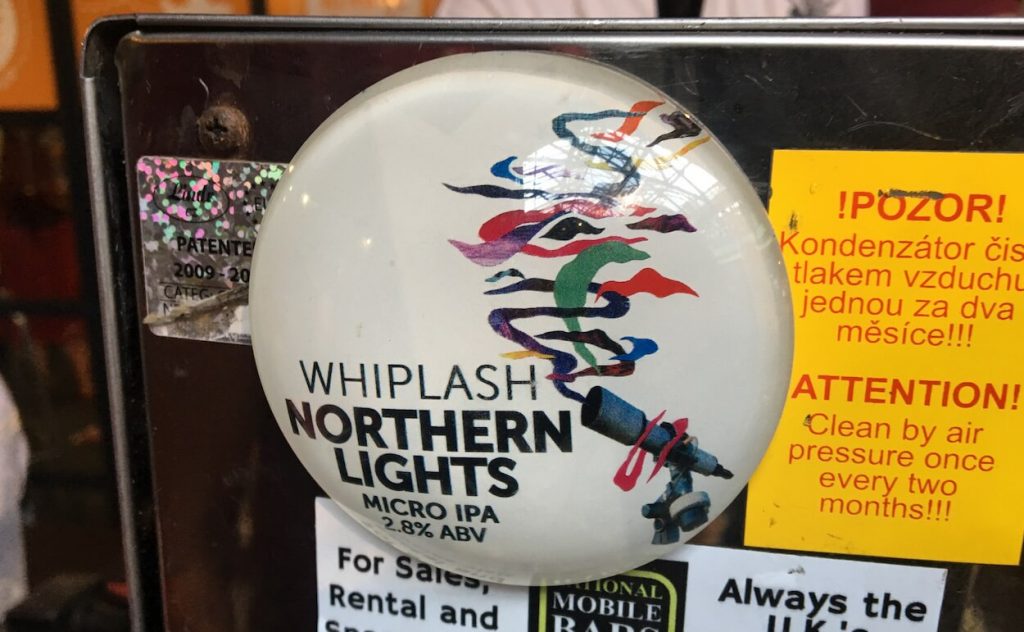 From a tiny, new brewery to a large well-known one, with Brewdog’s sour beers from Overworks. Overworks were pouring some of the most out-there brews at the festival, and made an interesting counterpoint to the many IPAs and pale ales you expect. 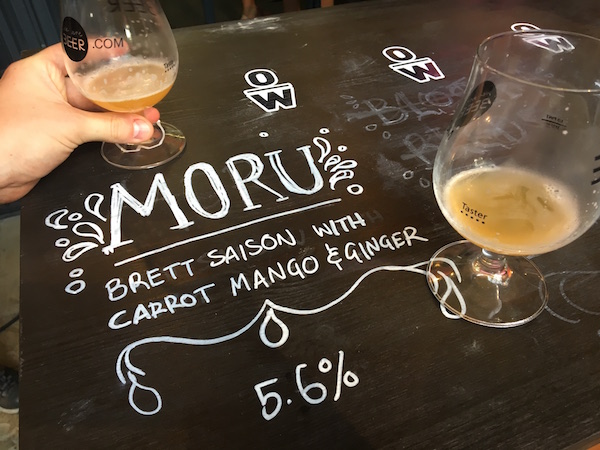 As was wanting to drink a few more porters before the time was up, we managed to get in a quick stop at The Kernel for their superb Export India Porter. 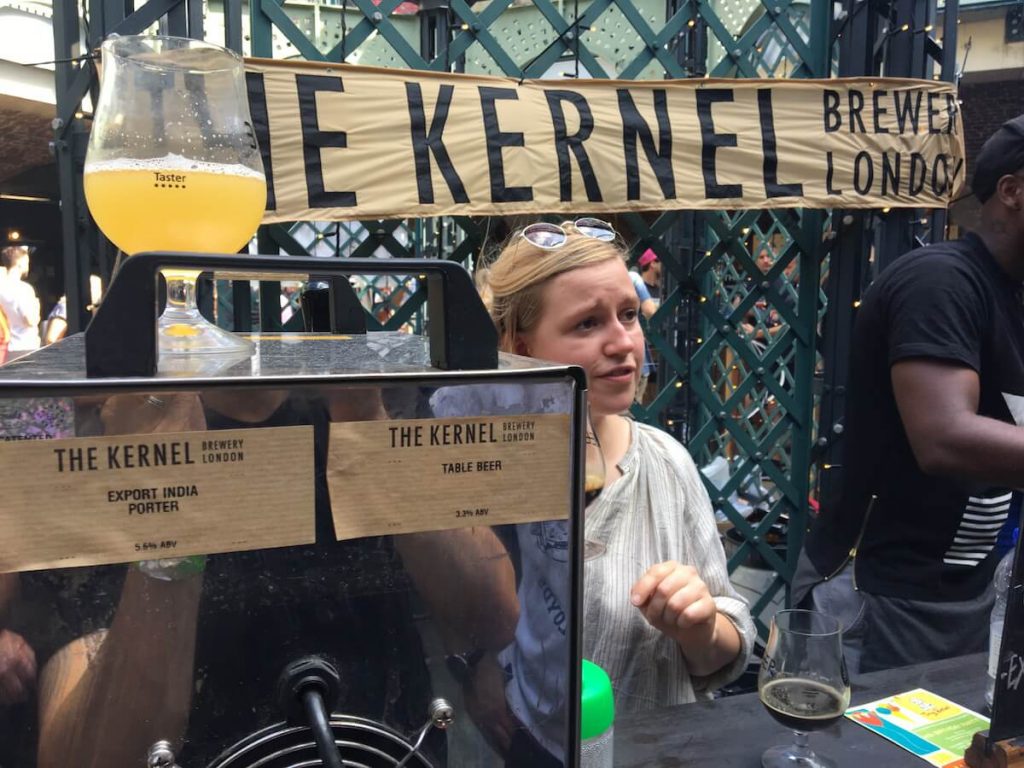 New Zealand produce some excellent beers, and, like many, I am especially keen on the powerful flavours from the Nelson Sauvin hop variety.

With that in mind, the last beers of the day were had at Cassels & Sons, another brewery I’d never come across before. We spent some time discussing the beers, tasting the Milk Stout and the Pale Ale. 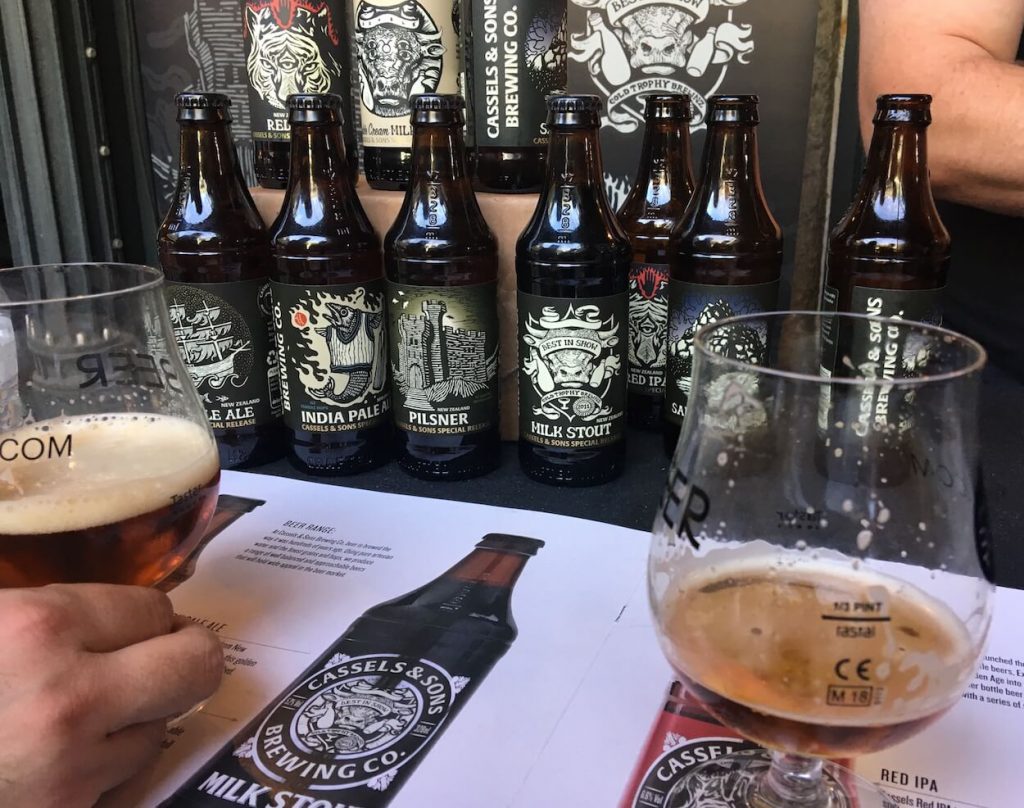 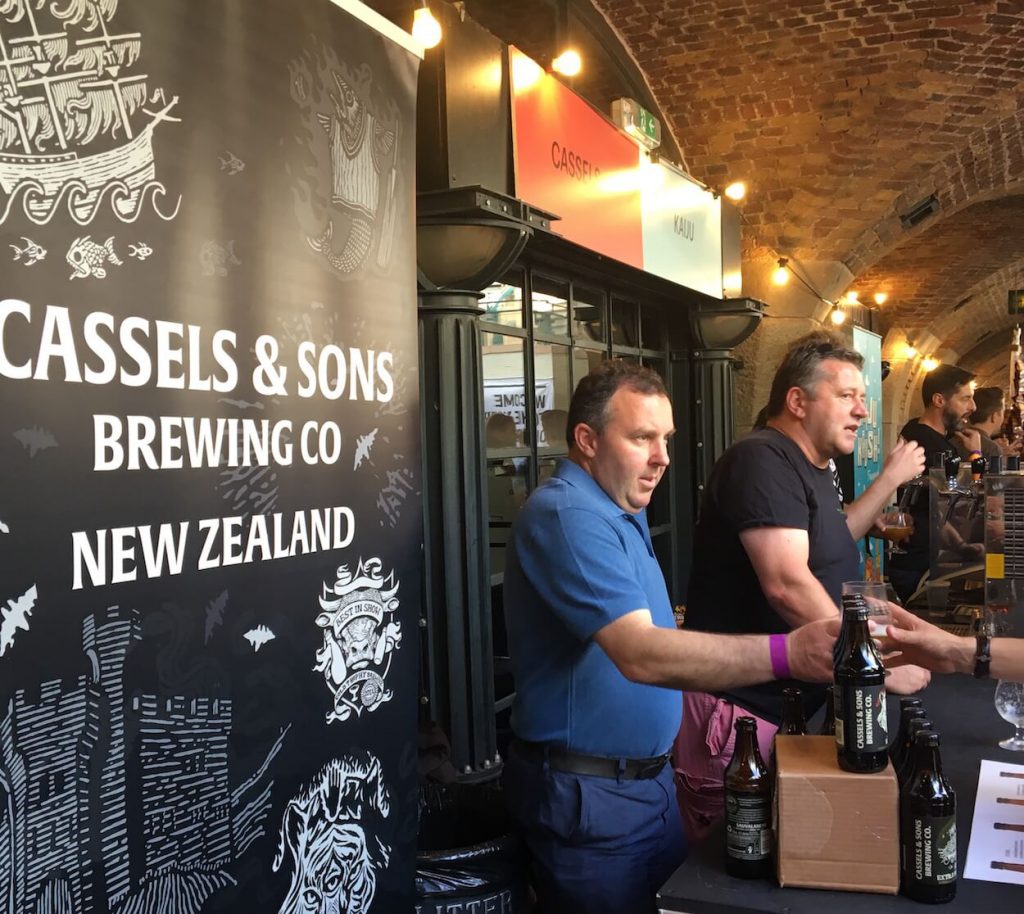 Cassels & Sons are from New Zealand, but are looking to expand to the UK.

It was over all too quickly, with bars seeming to finish serving fairly abruptly with little warning- I can certainly see why a weekend ticket is a good idea.

I like the way it is one price at this festival, it works well. There’s less faffing around with money, and you are able to try a wider range of beers. The amount served is fine, and you can always refill if you are liking a certain beer.

One thing I would say is that I wish it was a little easier to rinse or throw the beer away if you want to taste but not drink it all. There were some bottles of water for this task though, if you could get to them.

Overall, I’d say this festival is well worth the money if you are drinking – so if you are thinking about going in 2019, then get your buddies together early and get it booked in.