A Q&A with the Godstone Brewers 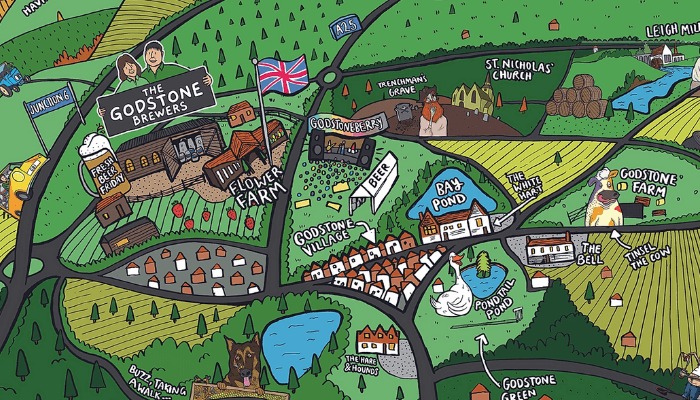 After getting a box of beer from local beer duo, The Godstone Brewers, I sent over a few questions to learn more about the history and future of the brewery, as well as discovering who designs their colourful, unique artwork.

How did you both originally get into brewing?

Anne & I met at Reading University in 1978 and after graduating lost touch when we both left 4 years later, both with Food Technology Degrees. During the time at the National College of Food Technology we both brewed frequently and imbibed accordingly. After graduating we both enjoyed corporate careers and Anne a period in teaching. Then in 2012 we met again at an awards ceremony where we each had a son fortunate enough to receive Engineering bursaries and got chatting again about our continued and unbroken passion for home brewing. One thing led to another and we started commercial brewing on a very small scale in 2015.

The cans look fantastic – could you tell me more about the illustrator / designer?

Both families have supported throughout and we have been blessed with the design and graphics inputs from Anne’s eldest son Will Jackson who is a freelance designer currently based in Vancouver. The new branding evolved and was launched in time for Godstoneberry 2019.

How is the Fundraiser going for the Local NHS Heroes?

The special small batch Blumenfarm lagerbier has only recently been launched in 500ml bottles with donations to local NHS heroes. We are targeting limited channels and hopefully a few events later this year current circumstances permitting. For the time being they are available direct from us or via Flower farm online shop for local delivery. We are reviewing other online channels at this precise moment. The cans you had were prototypes.

I heard that you were moving premises. Albeit next door. How is this progressing? Was it for more space?

We have moved our old brew kit into the bigger barn and have successfully brewed a handful of batches during lockdown. It is easy to social distance when you have so much space after being so confined for the last 3 years. The new kit which represents a significant expansion is being installed and commissioned so that we can hit the track running when the market and the local community are ready, and it is safe to do so.

What is the beer you are most happy with?

We are often asked which beer we are most happy with. Generally, it is either the one we last tasted or the one that we plan to brew next. On this note we have focussed during this recent period on maintaining supplies of our core regular beer range but will be introducing a rolling roster of very small batch experimental recipes in cans, bottles and mini kegs to satisfy our thirst for innovative and exciting tasty beers.

At present the trade is limited to delivery only – see above – but we hope to introduce a takeaway tap room option before too long – currently being decorated and fitted out the timing will be dictated more by events rather than our own design.

When it is safe to do so we would extend an invitation for you to come and see for yourself.

I’ll certainly be taking Steve up on his offer once the tap is operational!