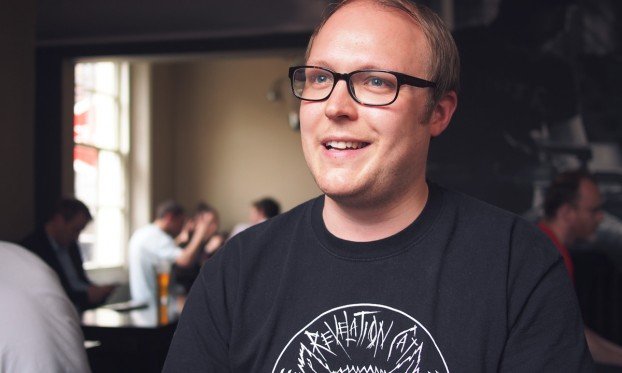 Ever since Craft Beer Company opened its doors to a beer thirsty public back in June 2011 the good stuff has been flowing fast and without reserve. If you’re a beer fan, this is the kind of place that makes you want sell a couple of internal organs just so you can sample everything they’ve got.

At the helm stands a 27-year-old Scotsman who’s working long hours to make sure that their taps are constantly filled with the best beer available. His name is Tom Cadden and he greets us upstairs at their Clerkenwell establishment.

He’s been with Craft Beer Co since the start, managing the bar in Clerkenwell, as well as overseeing all the other pubs, in Brixton, Brighton and Islington. With their second birthday lurking around the corner we were keen to learn a bit more about this beer aficionado – about how he fell into beer and how he became the guardian of deliciousness that he is today.

Picture this scene. A 19-year-old Tom is on a train with a friend heading into Glasgow to go clubbing. His friend pulls out a bottle of beer and says “you need to try one of these, it’s 11.3% and tastes amazing”. Tom takes a swig and his mind is instantly blown. Prior to this revelation he’d only ever had Carling and Stella and suchlike. But that bottle, of Rochefort 10, knocks his future destiny into a course that will eventually take him to a job where he’s responsible of serving the most amazing beer in the most amazing pub in London.

‘I think Belgian beers are very approachable, because they’re sweet and full of fruity esters. I was working at Wetherspoons at the time, and it just got me kind of interested. I started working through every single beer they had on, where as before I was all over their 99 pence bottles of Corona’.

To say that he was hooked is an understatement. The young Tom had been possessed by beer.

After doing some research him and his friend found RateBeer and started rating like the world was going to end. ‘My earlier rates must be terrible because I didn’t know anything. I was just randomly putting flavours out there that I’d never heard of. Probably the first 500 ratings I did were complete nonsense’. To get a sense of the sheer magnitude of his enthusiasm, when he stopped rating three and a half years ago because of a job position, he’d rated almost 5600 beers on RateBeer. I even found his old profile, although Tom is quick to point out that he feels his ratings are pretty damn dated now. 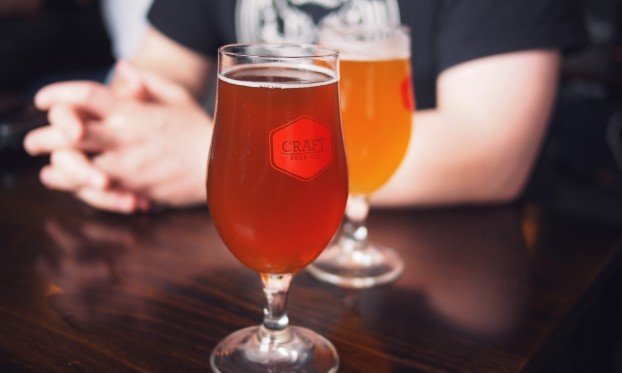 He brought his newfound interest for beer to his next job, at a pub called Blackfriars, still in Glasgow. As well as granting him access to almost any beer he fancied, working at Blackfriars helped him get to the next level in his career. ‘I was very lucky there, the manager let me look after the cellar. Because I was interested. He let me do whatever I wanted. If I hadn’t had that experience, and that freedom, there’s no way I would’ve been able to figure things out’.

He also had “official” training on how to look after cask ales from different breweries but he found these to be counter productive. ‘These people don’t tell you how to look after beer, they tell how to get your maximum yield from kegs and casks. And in turn, in my mind, how to ruin beer and turn it into nothing but money, and take away everything that is good about it’. He liked working with cask ales because he had to think about what he was doing, taking the whole process of brewing into consideration.

While at Blackfriars he went along to Paisley Beer Festival, which he describes as the best beer festival in Scotland, by far. Here he met two chaps who’d just started on their brewing career. Their names were James Watt and Martin Dickie, or BrewDog as they would be known as later. ‘I tried the Punk IPA, on cask. My reaction was “Oh my god, someone finally made this kind of IPA, in Scotland, I can’t believe it”. James Watt kind of edged over and shyly asked “do you like that?”. I was like “It’s amazing, I work at Blackfriars and want this beer”. So we were their first ever customer. We got invoice 001 from BrewDog’.

His next career move saw him move to London where he worked at yet another Wetherspoon, although only for a little while, because he soon landed a position as assistant manager at The Rake. Here he kept on absorbing as much knowledge as he could about how to properly look after beer. He was still rating heavily on RateBeer and was getting to know people in the industry. He also wrote a short guide on how to cellar cask ales, which he now says feels outdated. If he were to write it again it would be over 50 pages long. 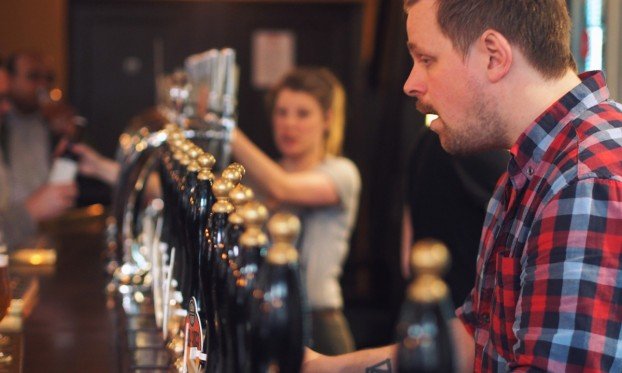 After learning everything he felt he could from The Rake he was eager to move on. Luck had it that he would bump into James Watt again.

‘I just got speaking to James at an event, five years after initially meeting him. At which point BrewDog was fairly big. And they just offered me a job in the company. I went off and became sales manager for BrewDog in the south of England’. And just like that Tom found himself at a completely different part of the industry. It was through this job that he finally met Martin Hayes at Cask Pub & Kitchen who told him about his next project, the Craft Beer Company. ‘My working ethos has always been if you’re going to do something, do it right or don’t do it at all. Martin and me thought on the same wavelength. He told me about the concept of Craft, that it was going to be a pub with 37 beer lines – 16 cask, 21 keg and up to 400 bottles. No one had done anything like this in the UK. He asked me if I fancied running something like that. I basically said yes then and there’.

See also  Rodney and The Horse Meets The Beak at Vinoteca

Craft Beer Company was an instant success, from the moment they opened their doors. ‘The opening day was the best day this place has ever had, in terms of take. I remember I went outside because there were four policemen there asking me why there were 350 people standing outside the pub’. And they’ve been busy since. The idea with Craft Beer Co was to go to town on everything, and not compromise on anything. Other places might feel like they have to have a well known lager, just as a crowd pleaser. Not Craft Beer Co. Their aim was to have the best lager. This ethos goes through everything they do. ‘If you’re going to have pork pies you don’t go for the price on the pork pies, you go for the best pork pies. It’s an important thing that I’ve reinforced throughout all the Craft pubs’. 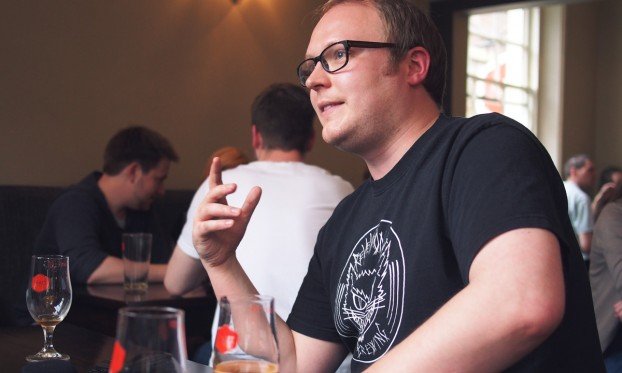 What has happened at Craft Beer Co is that they’ve basically hired one of the biggest beer geeks in the country to look after the shop.

Tom is still constantly doing research on what’s happening on the scene, using anything from RateBeer and Beer Advocate to Facebook and Twitter. He’s got a huge network of people he can tap into to find out what’s going on. When it comes to the beer they put on there’s only one thing that matter. ‘Our aim is to get the best beer that’s out there. It doesn’t matter where it comes from. It doesn’t matter what it costs’. They also have a lot of new breweries dropping by to try to get their beers showcased in their pubs. ‘Some of them are winners, some of them aren’t, that’s the nature of it. We’re really lucky in the UK right now, because there are so many new breweries.

It’s just makes my life really difficult because I have to really think about who to order from. It’s a real pain in the ass with so much good beer’. He chuckles, knowing damn well that he’s in the enviable position of being able to try some of the best beer in the world.

Tom sees this new wave of breweries as a part of a much bigger movement. ‘People are more interested in the food they’re eating. They’re more interested in where the cotton in their shirts come from. These kind of things also transfers over into beer. People are paying more attention to what they’re drinking’. And he doesn’t think it’s about to slow down. Not at least if the popularity of the Craft Beer Co pubs are any indication. ‘I don’t know when it will peak, if it will peak. Or maybe people will just realise that good beer is just as good as good wine. My view is that there’s still a long way to go. I think the whole beer scene in the UK is in a bit of a revamp at the moment. The only people who are getting upset are the people who are in it for the wrong reasons. It’s exciting times’. 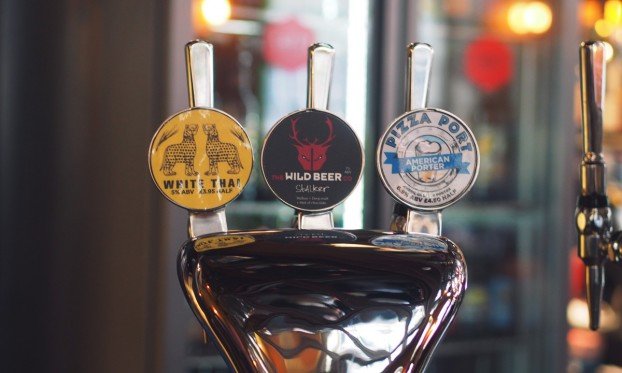 Tom isn’t just passively selling all this new exciting beer, he’s also collaborating with brewers to make special beers for their pubs, and it’s something he wants to do more of. It’s a way for their staff to get some first hand experience about how the hell the thing they’re selling is made. Luckily they already have a lot of beer fans working there. ‘We’ve got one of our staff here who works for Partizan Brewing on his spare time, and I don’t think he even gets paid. We’ve also got an assistant who went up and brewed with Blue Monkey. They just offered her to come up. It’s a very friendly industry’.

Next up for Craft Beer Co is to open up more pubs. Two, or maybe three, this year, Tom tells us. And then he quietly adds ‘there might be a brewpub in there too’. But before that the Clerkenwell pub is going to throw a big birthday party to celebrate its 2nd anniversary. ‘I have the beer list, and once again it’s going to be the best lineup of beer that’s ever been in the UK, ever. Without a doubt’. Tom puts on his most secretive smile and tells us that there will be 15 beers on keg that’s never been on in the UK before – a mix of UK, Scandinavian and American breweries. Keep your eyes peeled at their Twitter account for more information in the coming days. 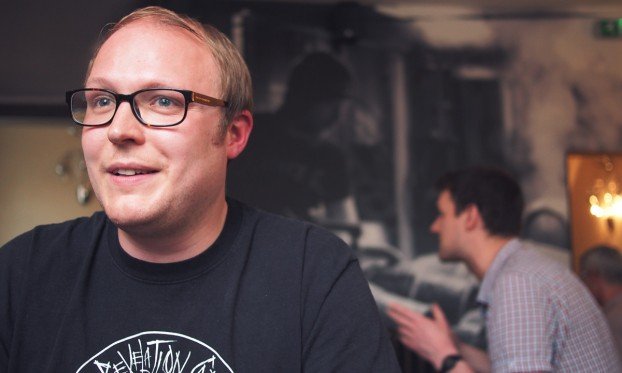 Tom works hard to make sure that Craft Beer Co stays ahead of the game. He puts in 70 to 80 working hours a week. Although he might be young he’s more experienced than the most hardened of beer fans. He reckons he’s tried well over 10,000 beers, and counting. He’s been super focused in his endeavour to work with only the best breweries, sourcing the best possible beer, and I find that his dedication and insight rivals that of any master brewer. I think all pubs could do with a Tom, at least that way we’d never had to drink bad beer again.

Words by Per Steinar.