A Journey through the Rhone Valley, France 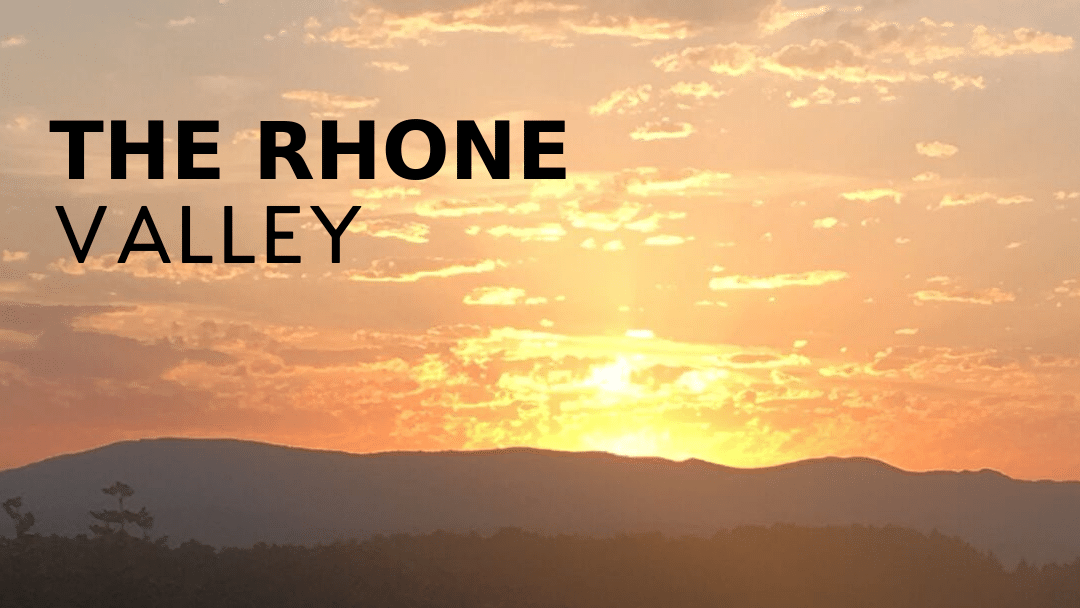 A friends wedding created the perfect excuse to take a leisurely week-long trip through the Rhone Valley to experience this region for the first time.

Delicious wine was sunk, food was devoured and quaint hillside villages were explored.

Here’s a few highlights of this fantastic trip.

The starting point was Lyon, an electric-scooter-filled city known as the gastronomic capital of France.

I arrived in Lyon by coach (I used Flixbus, and for £20 I’d recommend them!) from Amsterdam, where I’d been the previous weekend. I was promptly picked up by my wife in a stylish but tiny Fiat 500. A day of cycling in hot weather resulted in developing a mighty appetite for the evening meal.

The city has a number of ‘bouchons’ which all have pretty similar menus. Wine arrives chilled in a ‘pot lyonnais’ which is a traditional carafe of the region that holds 460ml (46cl).

We picked a traditional bouchon on a small square, and promptly ordered from their 3-course set menu. The food was fantastic. So simple, but delicious. I really enjoyed the Lyonnaise Salad starter, with more lardons and crunchy croutons than leaves, just how a salad should be! My wife had french onion soup with lots of cheese, and we both enjoyed a steak for main, followed by the house chocolate mousse for dessert. 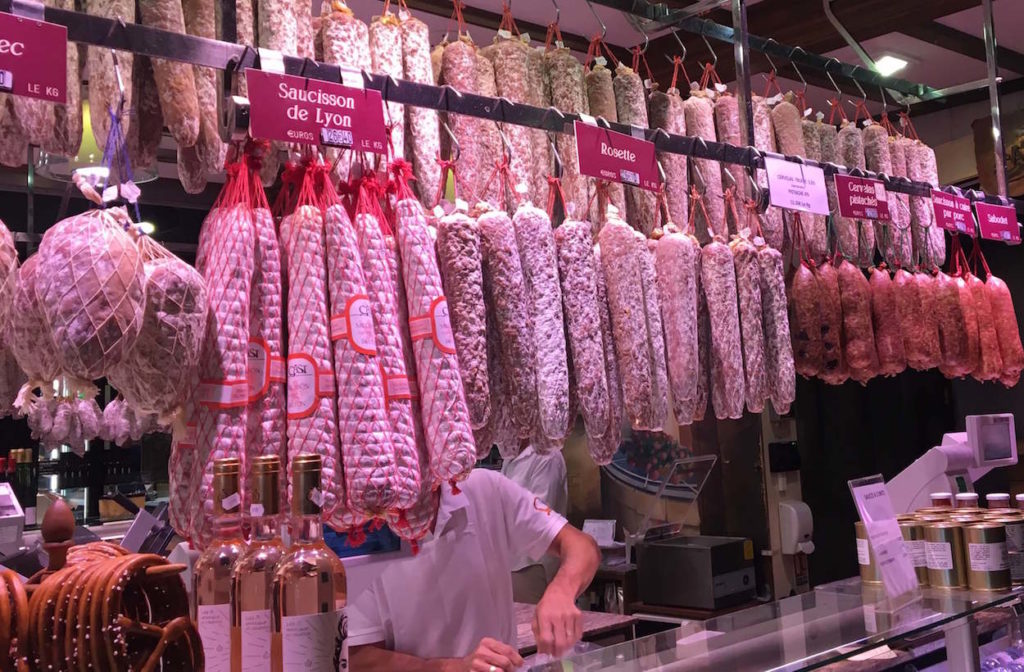 Early the next day we had to move on from Lyon and hit the road. There was just time for a visit to Halles des Lyon, named for the famous chef Paul Bocuse, for saucisson and cheese to keep us going the rest of the week.

Along the route we had a quick stop in the Northern Rhone at Tain-l’Hermitage, a pretty wine town on the river. After a visit to Cite du Chocolat Valrhona to escape the heat, we felt ready to search for some wine.

We found a welcoming tasting area nearby at Ferraton Père & Fils, where we were introduced to a wide selection of different wines from the surrounding valleys.

We walked in off the street, the tasting was generous, there was no charge and no pressure to buy. That said, the wine was great, so we did take a few bottles to go. All the wines we had were delicious and the tasting helped with understanding the difference between the terroir of the region.

The intense spicy flavours from the Syrah grape used in these wines appeals to me. Now I just need the budget for such wines on a regular basis!

Our bed for the night was in the little village of Mirmande, at a hotel and restaurant my wife had found online, ‘La Capitelle’.

Mirmande is sleepy and picturesque, sat on a hill, with windy streets. If you climb to near the top there’s a chilled out bar in someone’s garden, and go a little further to see the little church. 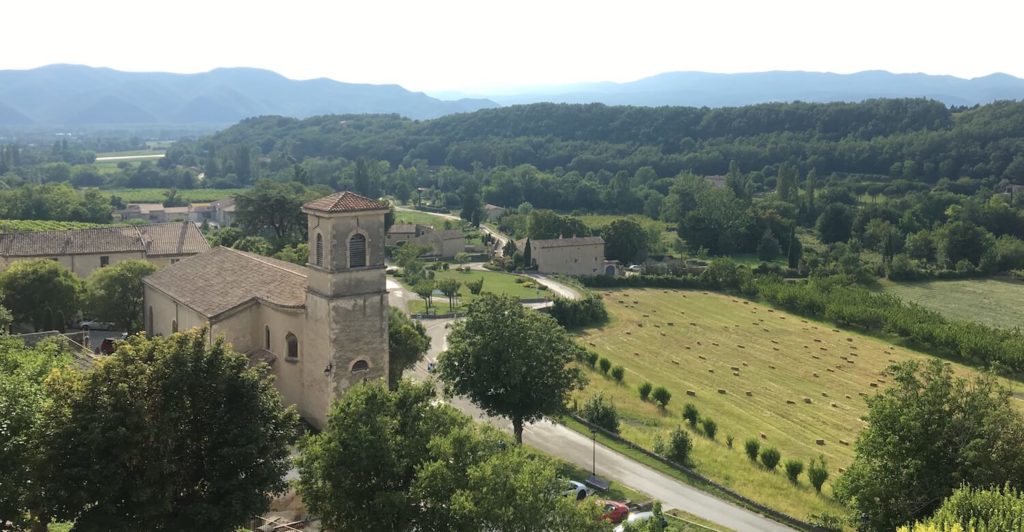 It’s only a short walk, but as it’s steep with uneven stones you’ll certainly work up an appetite in 30 mins.

We arrived at the restaurant around 8pm for our booking, timed so we’d see the sunset, as all the tables are on the terrace overlooking the view.

Here’s the menu – we deciphered some of it but the waitress helped with her excellent English. It didn’t matter too much – from the start this just felt like the kind of place where everything they served would be fresh, local and delicious. 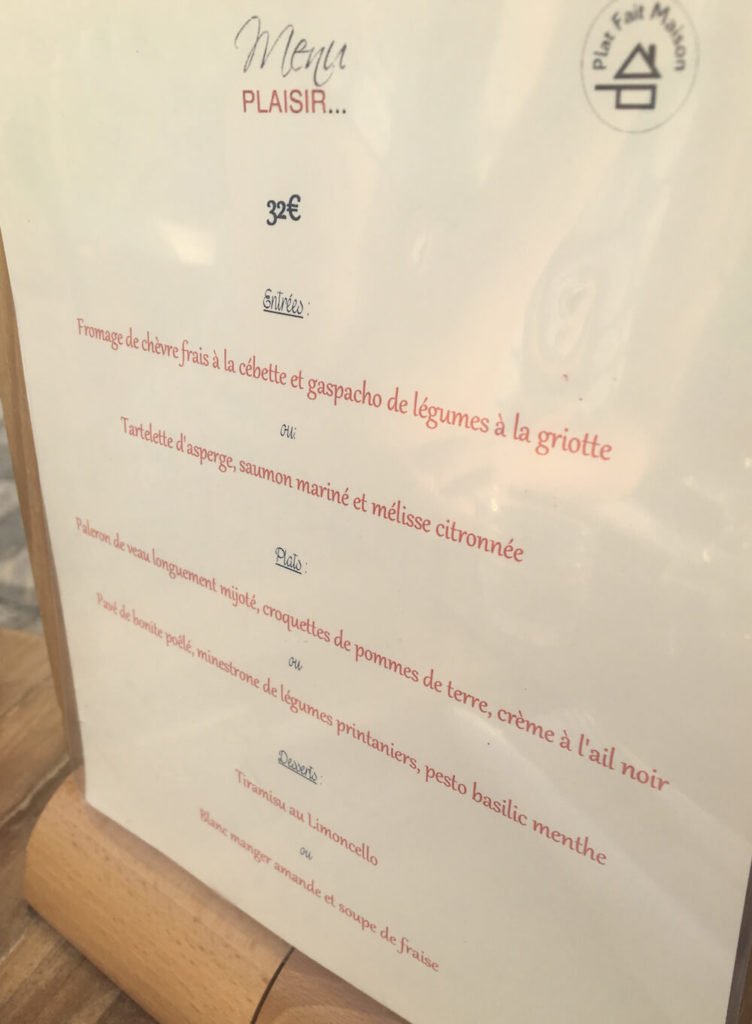 We started with some house Kir, a local beer, followed by a carafe of Cotes du Rhone, and decided to get different dishes so we could taste as much as possible. The gazpacho with local goat’s cheese was the star of the show, incredibly light, creamy and fruity, and perfectly balanced.

If you are in the area, I thoroughly recommend this beautiful and friendly hotel to stop for the night.

Our next stop was a countryside house next door to a field of vines. That’s not unusual in this region with pockets of vineyards all along both banks of the Rhone.. 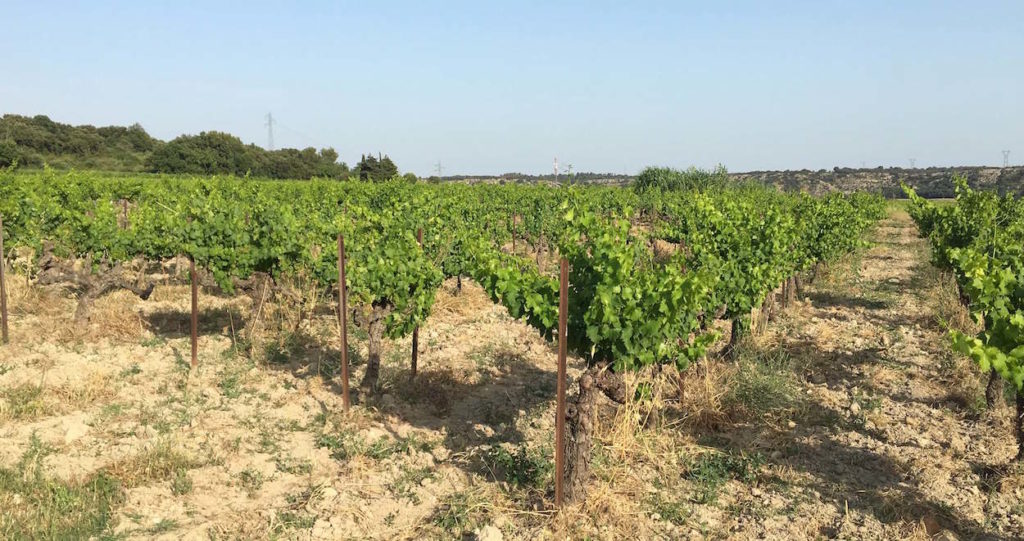 The temperature reached epic proportions (45 degrees!) whilst there so we were glad to have an excellent swimming pool to hang out in – find our accommodation here.

It did not seem the weather to have too much wine but we did brave a stroll to see if we could score some local wine.

We walked past the more professional winery next door, opting instead to see if we could visit a fromagerie first. It turns out it was closed, which was maybe due to the heat.

The trip was not wasted though as we saw a sign to a vineyard down a track alongside. We passed some goats, who looked to be fighting over the only shady patch. Some barking dogs startled us so we upped the pace.

As we approached the somewhat rundown entrance to the La Barotte vineyard, some 200 yards away, once again several large barking dogs sprinted up to us.

As any dog person knows you just stand still and wait. The owner’s wife soon showed themselves and the dogs began to realise we were friendly.

They were likely puppy dogs after that! 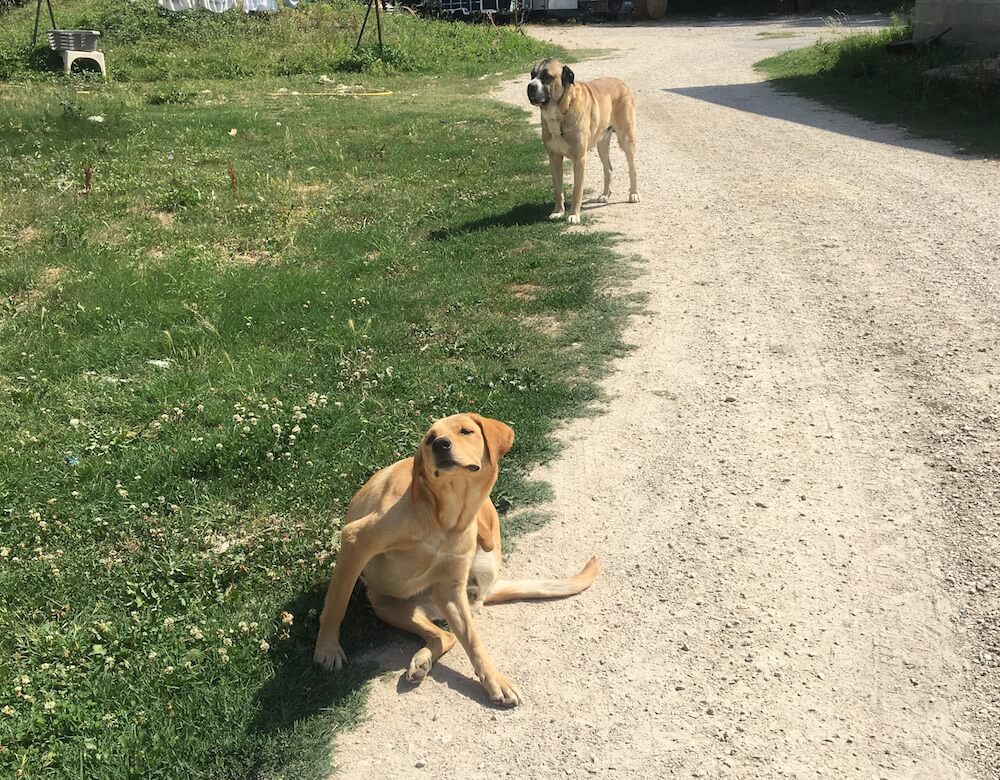 My wife managed to explain in broken French about visiting and tasting some wine and we were escorted to where the wine was made. I really need to learn French..

This is a real, small family winery where you can see they don’t often have visitors, especially not random, sweaty Brits. However they were very friendly and gladly showed us their wines in a small office.

The winemaker was off in Lyon selling wine but happened to return dripping wet, complaining about his air conditioning failing on the return journey.

We tried three different wines, a white and red Cote de Rhone and a Lirac. These were well priced, all coming in at under €10. The Lirac was the best wine, with smoother and finer quality. We grabbed a bottle of that for €9. I don’t drink too many whites from Cote de Rhone, so we picked up a bottle of the white too for €6.

After a few more days enjoying sunshine and relaxation it was wedding time!

On our way to our villa near the venue we made a few stops, firstly in the beautiful town of Avignon, where we visited the famous Pont d’Avignon. Cue my wife singing the well-known song for the rest of the day. 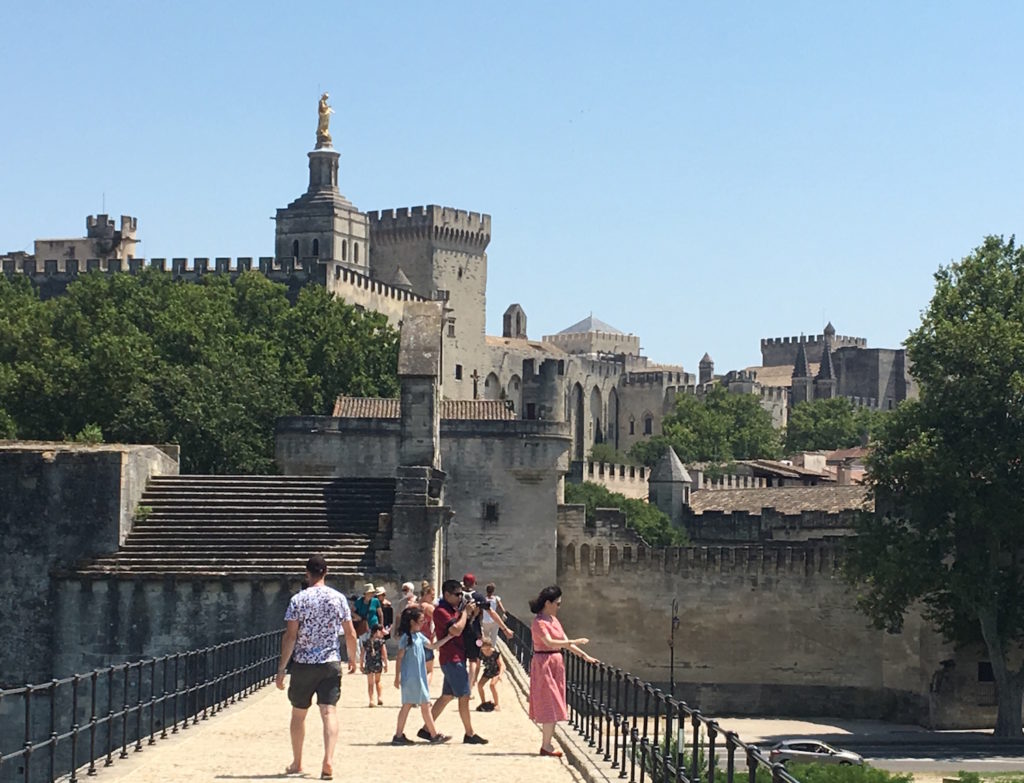 The visit was good value and provided a great history into this monument, although the 40 degree heat made standing on the bridge itself an exercise in energy-preservation.

After Avignon, we headed to the Pont du Gard, an ancient Roman aqueduct which is incredibly well preserved. Your ticket allows entry onto and under the bridge, which includes a very well air-conditioned film and museum.

We joined the locals for a swim in the river, which was beautifully cool and silky in the heat. 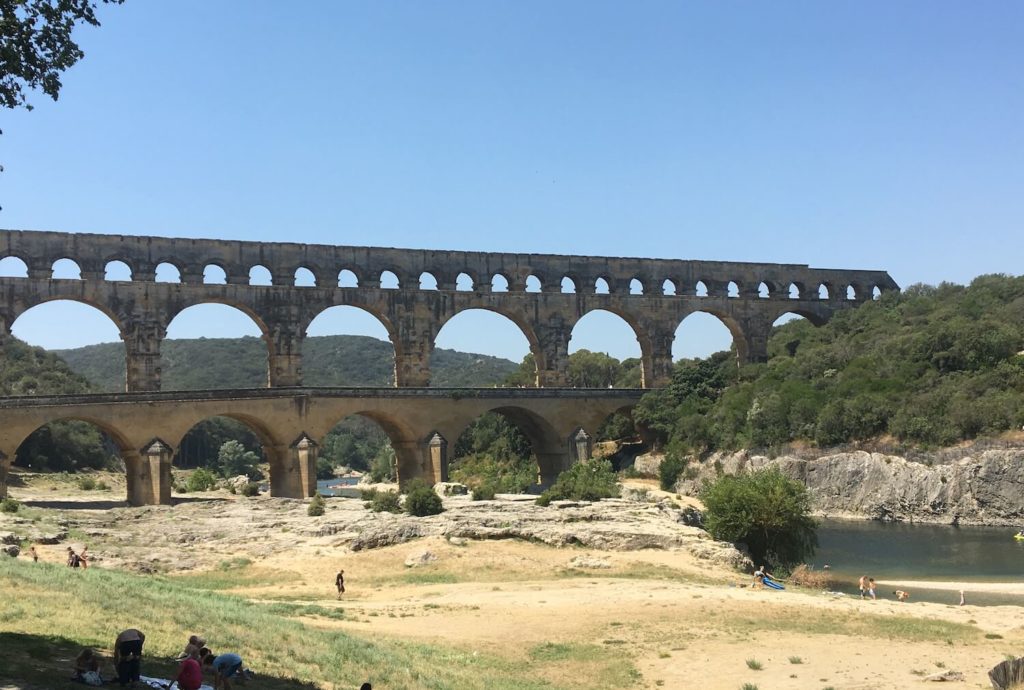 I also took the opportunity to try the local beer speciality, Picon Biere, a beer mixed with an aperitif which has a distinct orange peel flavour. It served as ample refreshment when taking a break from the baking sun.

Our final stop on this wine-filled journey was on our final day, on the drive back to Lyon, appropriately a visit to Beaumes de Venise for some sweet wine5

We tasted a good number of wines, and was amazed at the diversity of flavours which were on show. It’s probably one of the most interesting tastings I’ve experienced, as the distinction between the wines was clear. 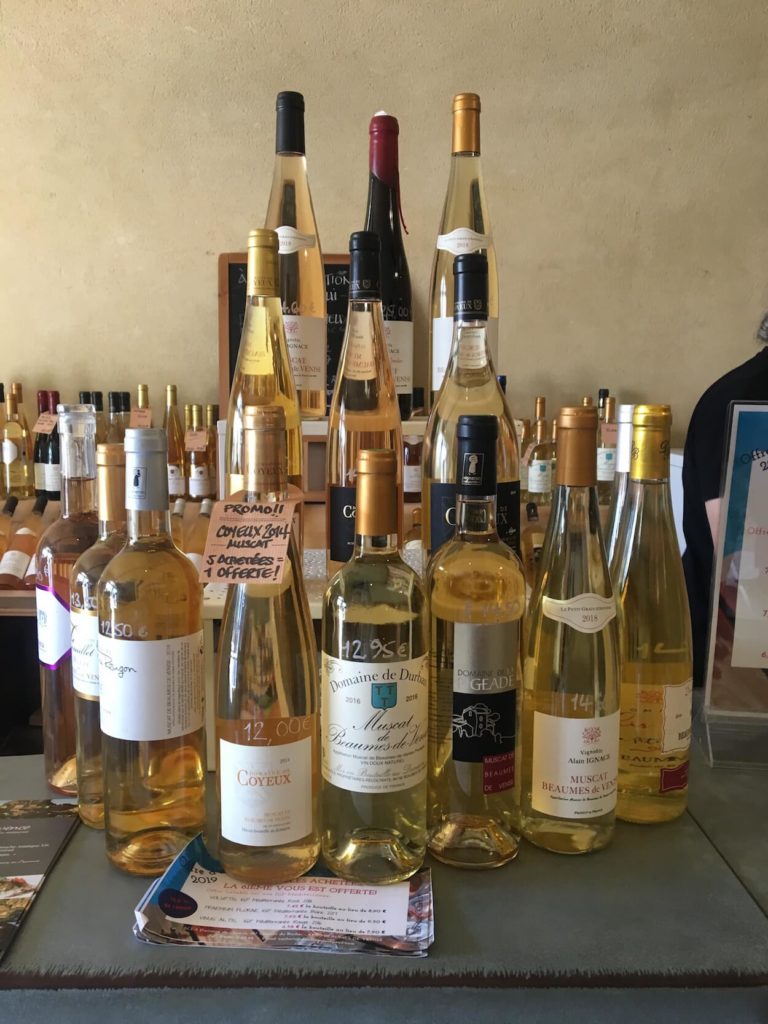 There was lychee, apricot, lemon, and a multitude of other herbal and fruity notes which I was able to distinguish, even with my beginner’s palette.

We took one bottle home, but could have easily blown the budget on the lot, should we have had space in our cases!

Until next time, Provence!