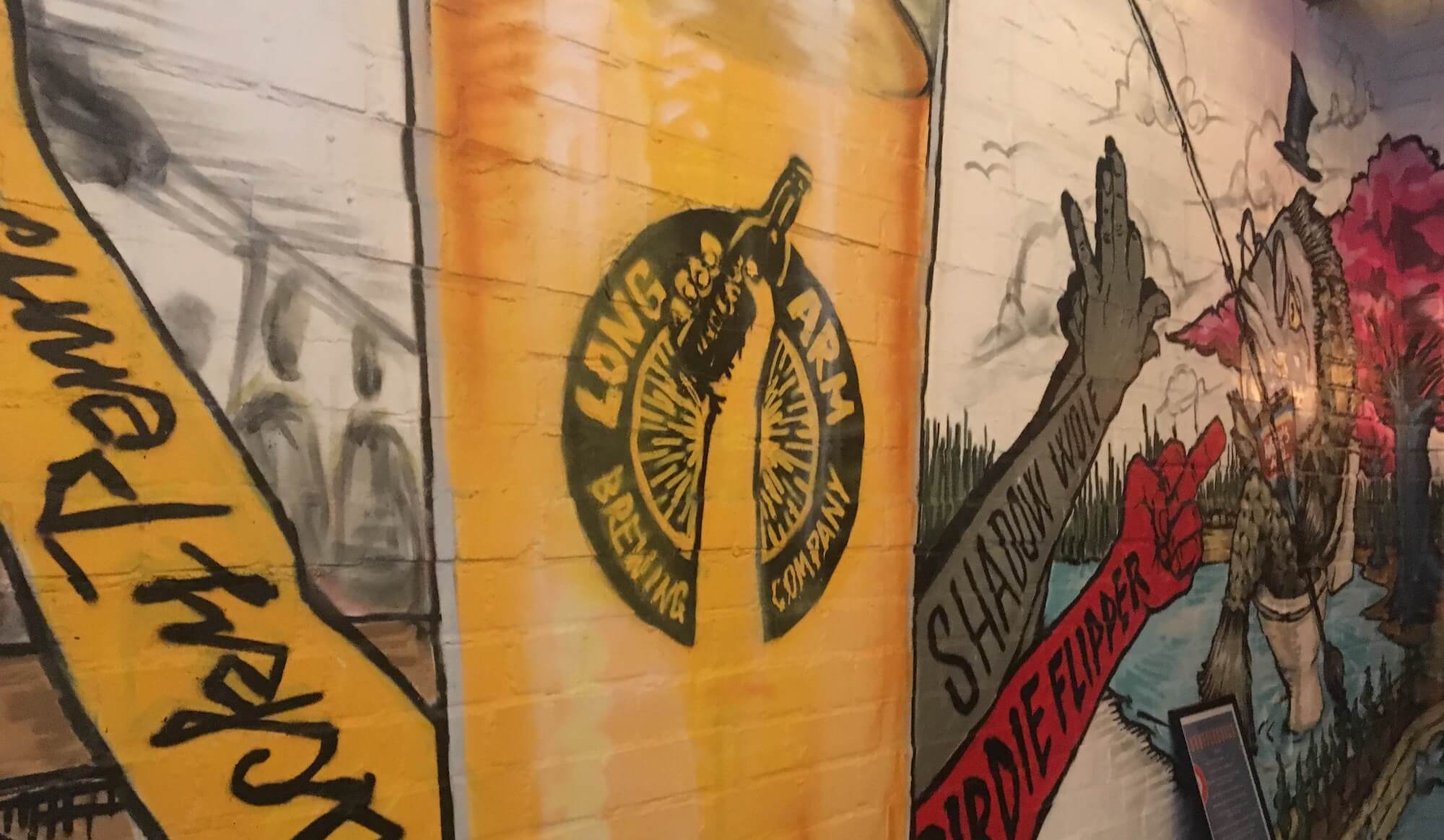 There are now so many places to enjoy fresh craft beer in every corner London, it is with some regret that I’ll be leaving the metropolis this week.

Yep, I’ll be moving away after 13 years in the big smoke out to the commuter belt.

But don’t worry about me, I’ve scoped out beer shops, pubs and vineyards in the local area already.

So, I was delighted to attend an event at the Long Arm Brewing Co in Worship Street – my last hurrah in London for a few weeks at least. 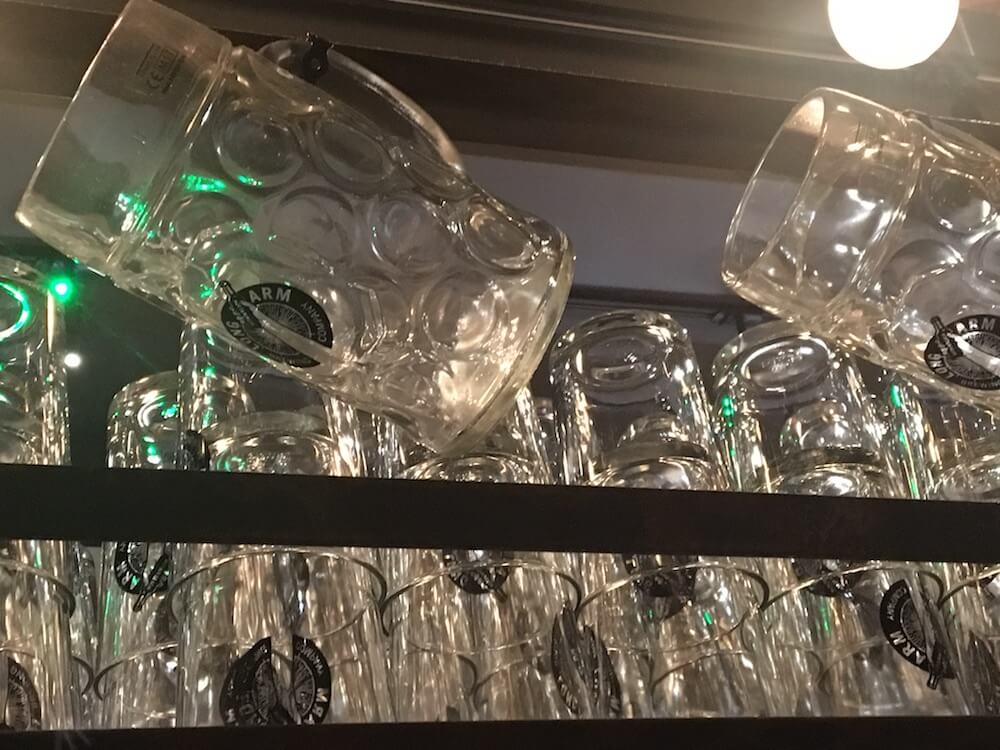 I know this area well, having worked in Moorgate a few years ago. Since then, Long Arm has opened a brewpub.

It brews its own beer in full view of the punters, delivering fresh beer straight from the 500 litre tanks to the taps.

I am a huge fan of this somewhat rare dispensing method and was excited to check out their setup.

Not only does Long Arm cater for beer bores, they have a high-quality kitchen to appeal to foodies.

As you’d expect, carnivores can tuck into shorthorn cheeseburgers and chilli beef croquettes, but perhaps more unusually they produce a well thought out menu for vegans.

They’ve spent some time over this, with tasty morsels like Kentucky-fried cauliflower, vegan nuggets and an impressive vegan big mac.

I tried the vegan nuggets, which were pretty moreish, but they did need the chipotle mayo to counteract the dryness. My suggestion would be to attempt to improve the filling-to-breadcrumb ratio.

And If the excitement of vegan food bloggers was anything to go by, they have a success on their hands with the triple-decked vegan burger.

If I manage to return soon, I’d like to try the cheeseburger and the ‘Big Mac’ side-by-side… 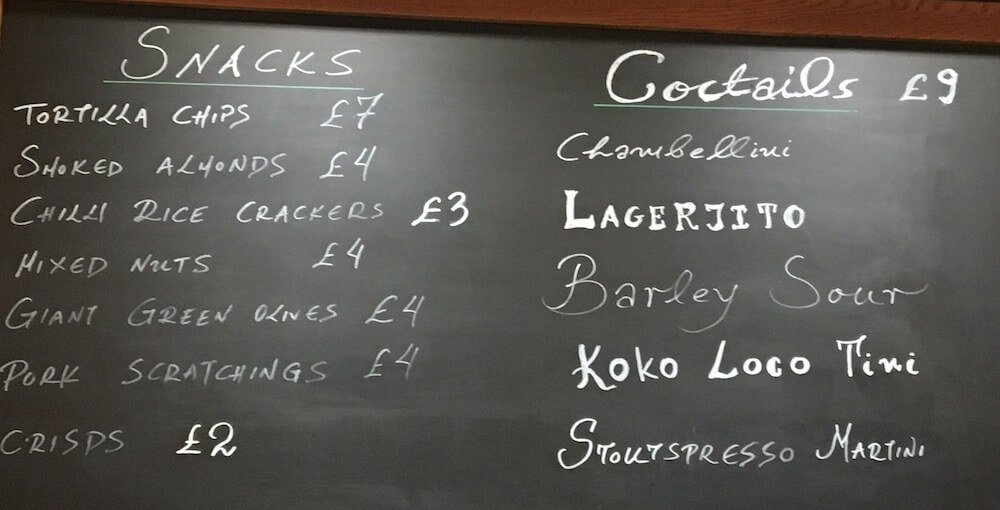 Longarm have some interesting beer cocktails. Try the Stoutspresso.

Many new breweries follow the well-trod path of BBQ + beer and burgers + beer, so It would indeed be cool to see Long Arm be successful with vegan fast food.

What about the beer?

I was treated to the newest interesting ales coming out of the brewhouse, which incidentally, are also vegan.

To start with, there was Ryokucha Orenjibiru, a pale ale at 5% ABV. 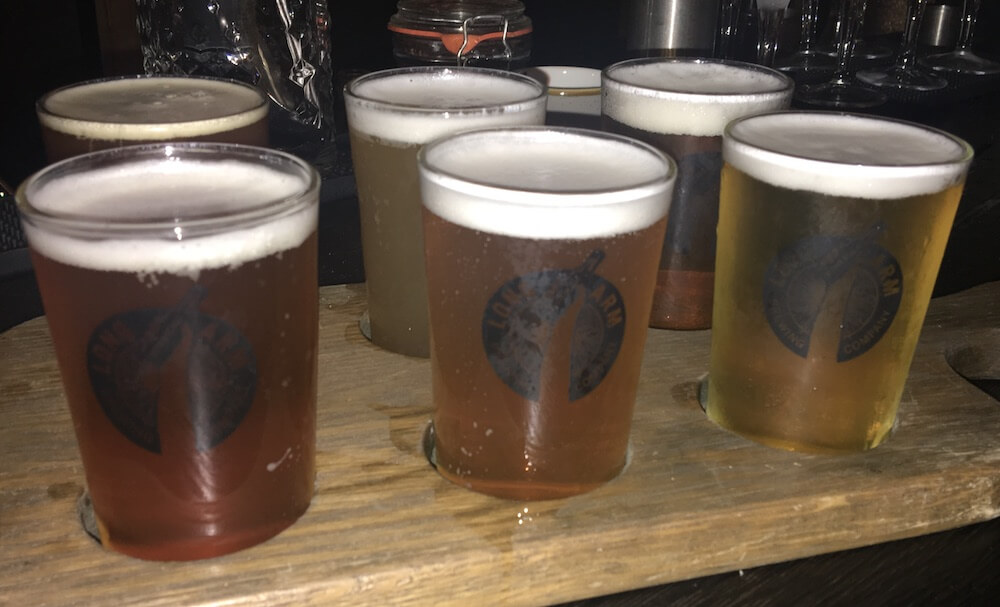 This was an interesting one.

They had added a truck load of Orange and Lotus Flower Green Tea from Twinning’s to the brew, which came through instantly. The signature hop was Sorachi Ace. An apt choice for the Japanese theme.

So good I went back for seconds. And thirds… 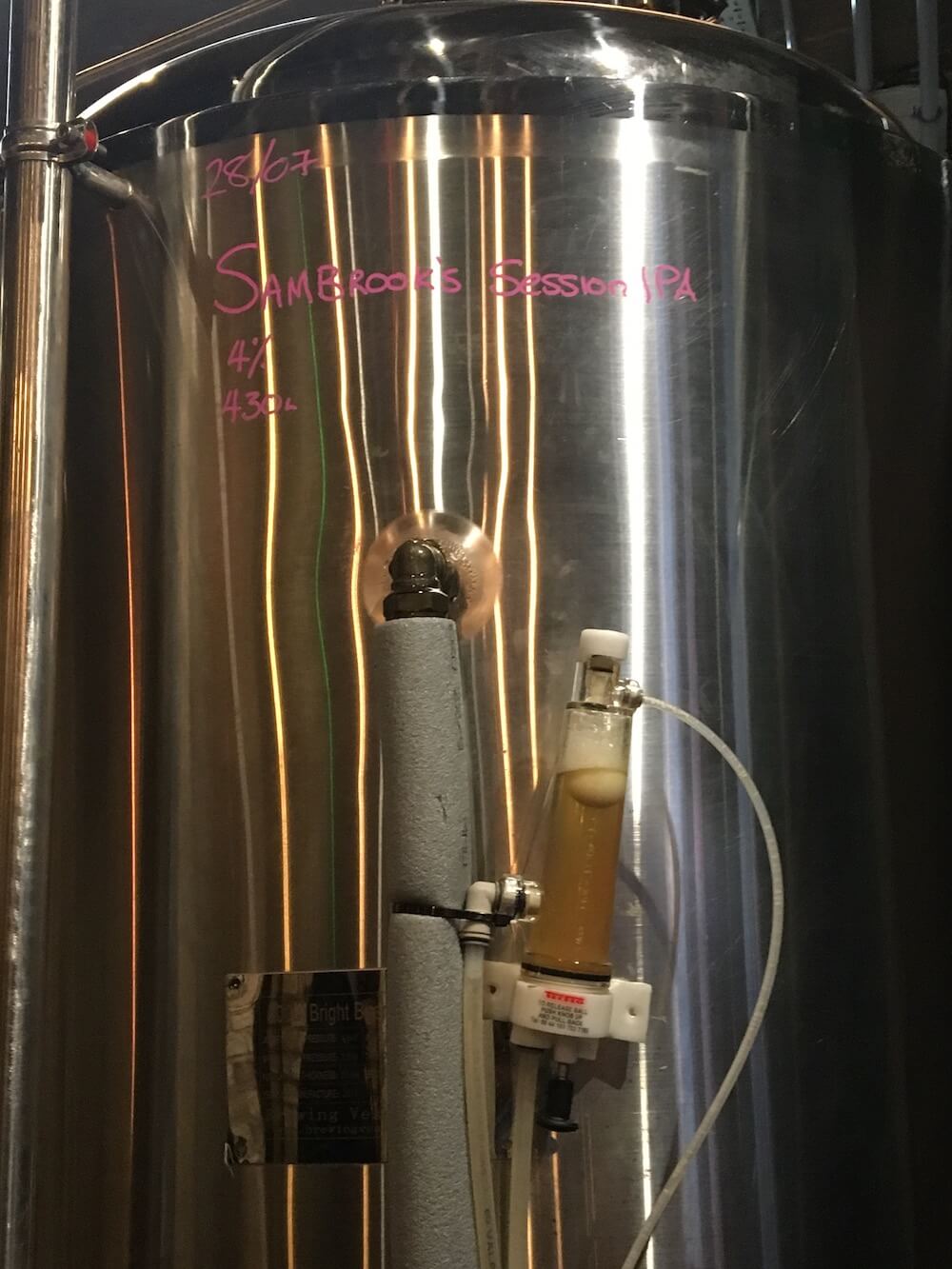 The brewery enjoys a healthy relationship with Sambrook’s

Long Arm are very open on what malts and hops are used in the beer, and are keen to engage and educate drinkers at the bar

The next beer I tried was Fallen Leaves, a great idea for an autumn beer.

I feel this is probably a beer you’ll either love or hate, as there is a lot going on here. I personally think there needs to be a few tweaks to the recipe.

This could just be me though, I always tend to prefer red ales which are bottle conditioned.

It was at this point, the General Manager, Richard Price, explained the name of the brewpub.

The idea was that you always want the next beer to be within reach.

It was likely that a few jars had been consumed as the group concluded that it would be awesome if you had a really ‘long arm’ to reach any beer in sight.

Makes sense to me! 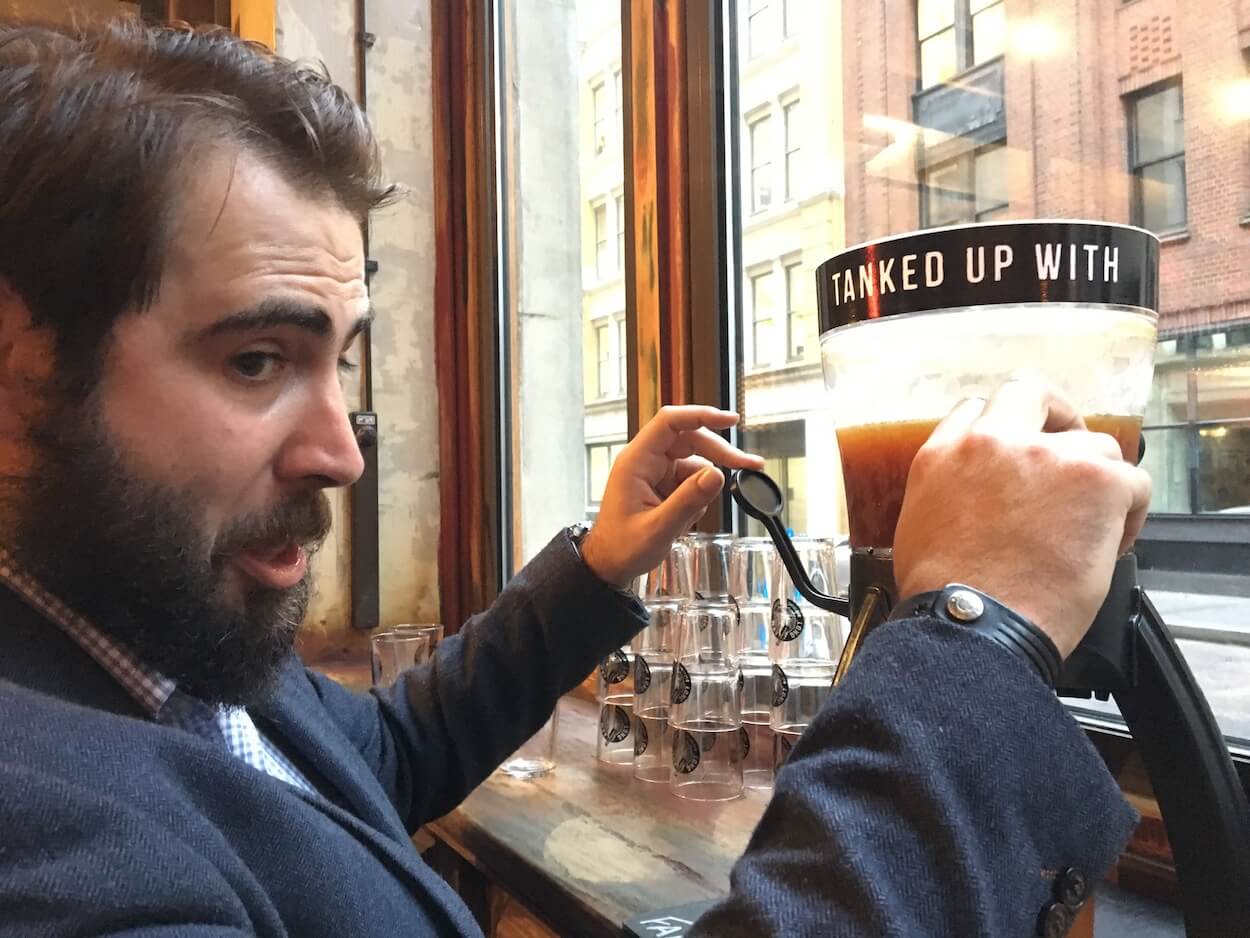 The Fandango IPA is a fairly malty session-strength IPA with a deep caramel colour. I found this sweet and quite unusual for something labelled as a session IPA.

To brew the beers, the brewery has some novel processes.

Spent malt is used to feed fish, which in turn provide fertiliser for the restaurant’s herb garden. 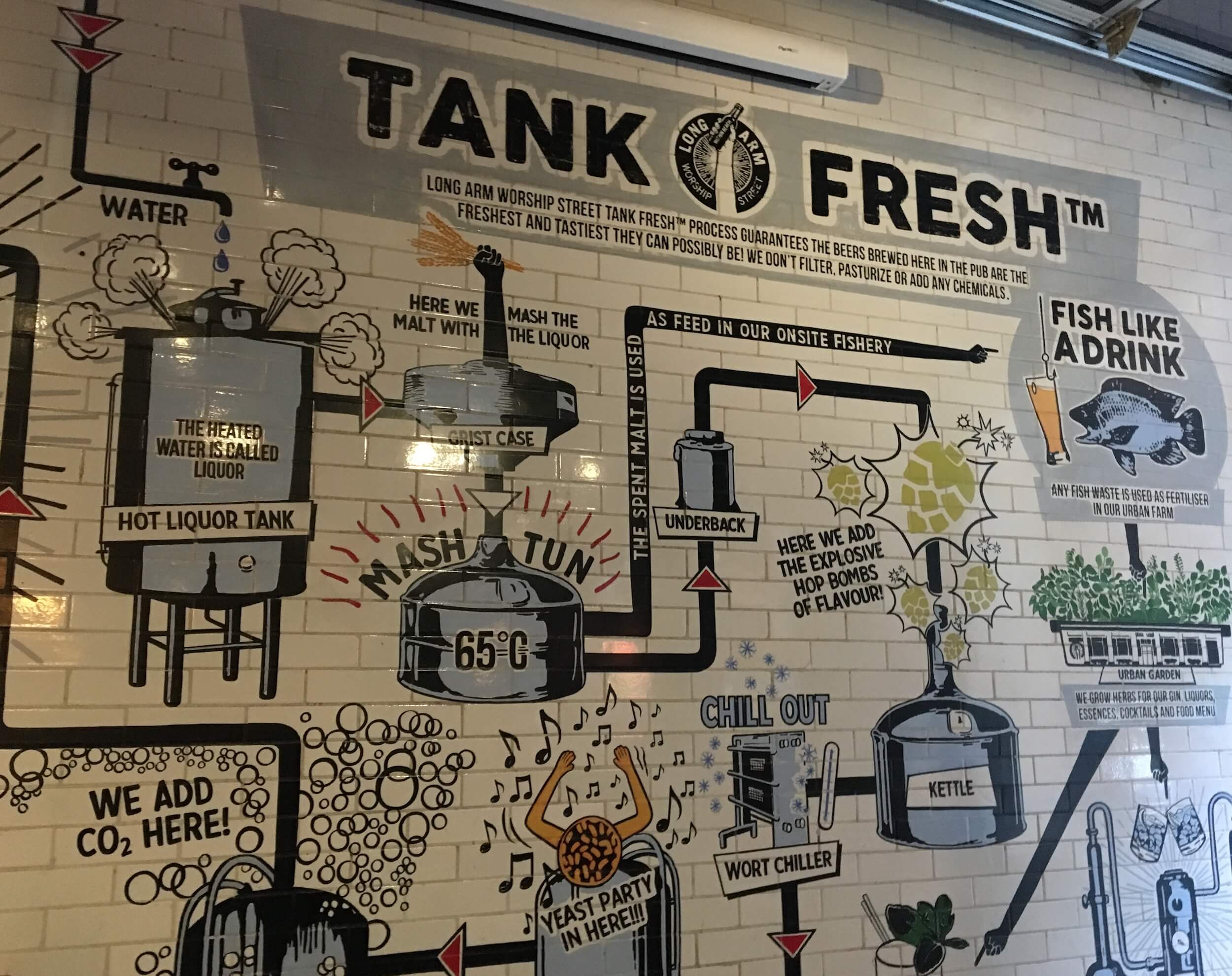 I met one of the current brewers, Elliot, an enthusiastic chap who explained each of the beers for me.

He estimated that about 60% of the pub’s clientele are there for the beers, whereas the other 40% are usually looking for the big brands.

Long Arm take pride in ‘educating’ this 40%, encouraging them to try something different from the usual lagers. 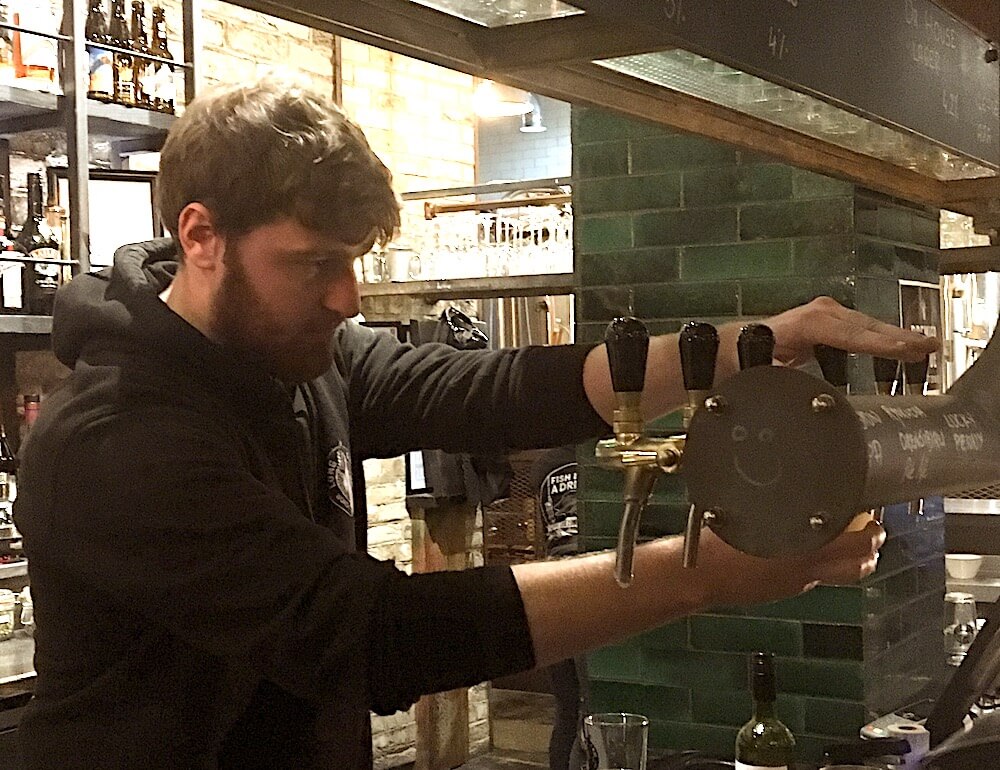 After the three specials poured for the event, I had a tasting to compare the other beers from the current tap list.

Possibly because I was craving some hops after two weeks of Bintang, I was quite taken with ‘Lucky Penny’.

I think this zesty session IPA was probably overall the best beer of the evening. It’s a more refined and balanced beer – but perhaps I just prefer the fantastic Citra and Mosaic hops used. 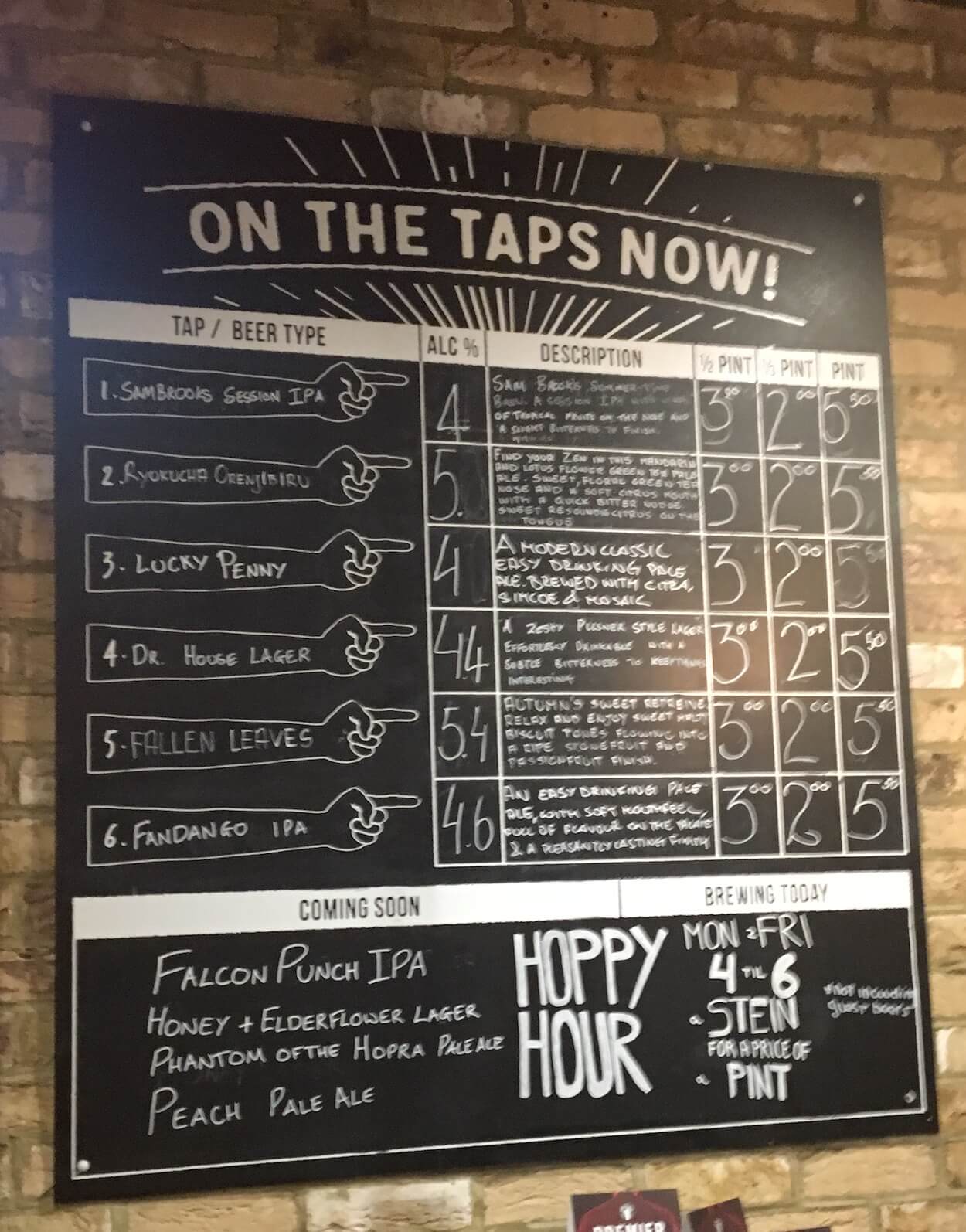 They won’t serve your macro lager here, but you can certainly get a better pint with more flavour with the Dr House Lager.

Very drinkable, with just the right amount of citrus and bitterness to make it refresh. It was hard to resist another sip.

The tank dispensing system not only suits hoppy session IPAs, it can also work wonders with lager styles. For the more traditional ales, I will always prefer cask, as long as it is kept and served correctly.

I was also surprised to find a Session IPA from Sambrook’s available. I always think of Sambrook’s as producing good quality traditional cask ale.

Elliot explained to me that they contact brew there for Long Arm, and he took a tanks-worth of this beer back with him after a recent visit.

It was worth bringing back, that’s for sure.

This fresh, you can’t beat beers like this for a session on a warm evening.

My top learning from the evening at Long Arm? Always ensure your next beer is within reach!