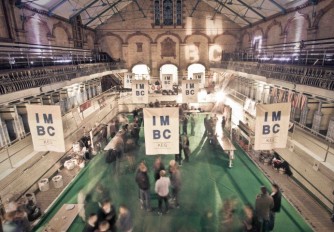 Indy ManBeer Con 2012 was, without over exaggerating, one of the most forward thinking beer festival seen in the UK. More akin to Copenhagen Beer Celebrations than your normal CAMRA get-together, the festival combined the most exciting beers from the UK, served by the brewers themselves, in an amazing venue. In preparation for Indy Man Beer Con 2013 we wanted to speak to the guys responsible for putting it on, Jonny Heyes and Duncan Sime, to ask how the festival came about and what they have up their sleeves this year to keep their festival ahead of the pack. 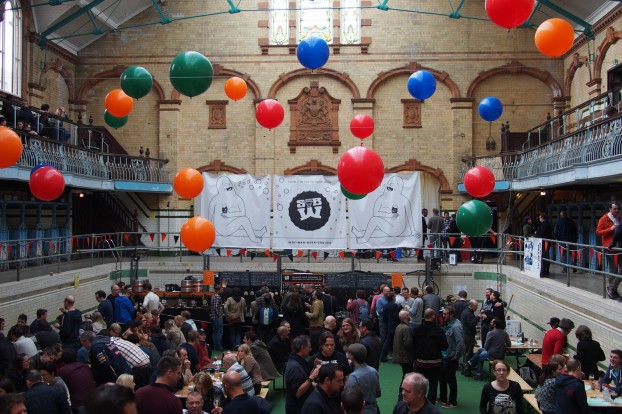 The guys are bar veterans of the Manchester scene – Jonny is a bar owner and Duncan an events manager. They recall how a general murmuring of frustration was one of the inspirations for the first year. “Lots of people were talking about wanting to do a new beer festival. People were moaning and it got to a point where we just thought, sod it, let’s do one.“

The genesis of Indy Man Beer Con was also born from the buzz Jonny and Duncan got from an all British tap takeover festival they ran at Port Street, one of their Manchester bars. “We pushed the boat out, sourcing beers we had only heard about. Dragging them in from around the country.” They cite the quality of the beers as a huge inspiration, saying they were as good as anything they had imported. Doing a bigger festival felt like a natural step after this as Jonny explains. “There is only so much beer we can serve at Common and Port Street, and this was a way we could serve lots of beer and bring everyone we know together in one place”. 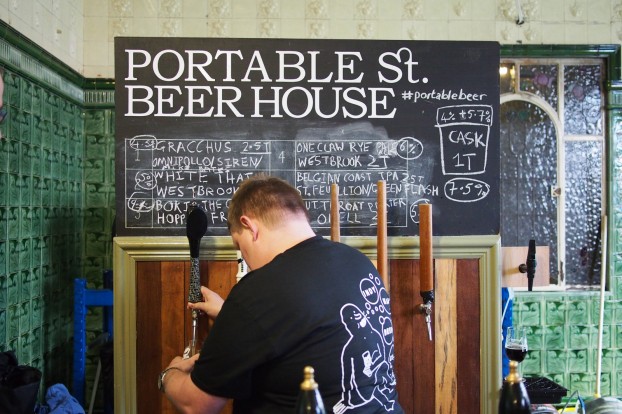 They started out with small aspirations for the festival. “We only wanted to do a festival for 200 people, and started looking at basements and interesting venues”. But plans changed when they found the Victoria Baths. After visiting the venue for a wedding, Jonny was blown away by the space and they both worked to fit the festival around it. “It’s the kind of place you would never expect a beer festival would be. It’s the antithesis of the crusty conference centres”, Duncan adds.

The first year of festivities was a roaring success, quickly selling out and setting the bar high for both other festivals around the country and the anticipated return of IMBC this year. For those who missed the first year, they produced a film that helped to sum up the experience. When asking about what they wanted to improve upon this year, only the financial aspect was something they felt they needed to refine. “We judged the first year a success and a real foundation to move off. It’s important to make the sums stack up so that it’s a sustainable annual event, and I think we’ve done a much better job this year.”

Victoria Baths still seems to be dishing out inspiration for this year’s festival, with the extra rooms of the venue being opened up to accommodate extra aspects of the experience. “Part of the appeal to us is exploring the space and the usage of space”, Duncan explains. “You have the Turkish baths, and then huge awe inspiring cathedral spaces. There is the superintendents flat where we are running mini ‘Meet the Brewers’, and the cafe area where we are running Tim Anderson’s food and beer matching event.”

Having sold out the first year of the festival in record time it would have been easy to think bigger for the next year, but Jonny explains that is not their focus. “We took a note from Kjetil from Nøgne Ø who said that making something better doesn’t mean it has to be bigger.” Instead they have focused on creating a varied experience for each session and each person that walks through the door. “We are hoping that no two people have the same experience at the festival. The beers will be different every single day, the brewers will be changing and there are lots of different spaces hosting lots of small events.”

The choice of breweries is an obvious talking point for this years festivities. With the huge influx of new breweries it was always going to be a difficult task to choose who was going to make the cut. “We started off saying that we were not going to have anyone there that were there last year”. They partially stuck to their guns, with only 7 or 8 brewers coming back from last year’s pack. “We wanted to make a statement that we weren’t rolling out the same things from last year and so we left spaces unfilled.” With so many new breweries popping up, this seems a solid move and has paid off with recent inclusion of Evening Brews buddies Weird Beard Brew Co and the enigmatic Alpha State. “The lineup is a good reflection of what is happening right now”, Duncan adds. 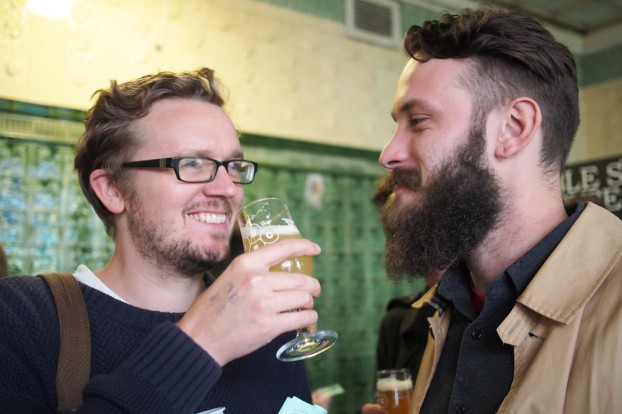 The IMBC crew have also been furiously organising collaborative brews with some of the breweries coming to the event, such as a producing a barrel aged saison with Buxton and a Huckleberry IPA with Roosters. They have also most recently done a brew with Thornbridge to commemorate notable beer blogger and festival supporter Simon Johnson, aka ‘The Reluctant Scooper’ who sadly passed away earlier this year. Asking how all these collaborative brews happened they explain “it was all born from the list of stipulations we gave to brewers, one of which was that each brewery has to bring a special beer or a special treatment of a beer that is exclusive to the festival. We are still working on Brewdog to give us some casks, it’s one of our little jokes. Our first email stipulated it, and they kind of took it seriously for a minute. “

One of the biggest changes this year is the inclusion of a few breweries from further afield, namely Italy and Denmark. “It was a logical progression. We didn’t want to go over the top to detract from the focus of the festival as a showcase of British brewers, but we did want to give a bit of extra context”. With Copenhagen Beer Festival being one of the inspirations for the festival, Mikkeller and brewer buddies To Øl were an obvious choice. Duncan explains, “Some of the Mikkeller beers we tasted at Copenhagen were mind blowing, so we worked quite a bit to get them involved.“ Jonny adds that they had to hustle a bit to get the enigmatic brewer involved. “It took a few chats in person and a lot of email conversations, and finally there was a golden email that said yes”.

Food is again an important aspect of the festival, with an extra special event from Tim Anderson – Masterchef winner and ex Euston Tap manager. “He’d always been on our radar just because of his culinary thing and strong connections to the beer world. He seemed the perfect person to do it.” The collaboration will be more of a collection of food and beer experiences rather than any formal sit down event, and sounds like a perfect addition to a boozy session.

With more talks and events to be announced over the coming weeks IMBC seems to be ramping up for a second strike and to prove they’re one of the best celebrations of good beer in the UK. Creating an expansive, evolving festival that, as Jonny says ‘“is an experience, not just a beer tasting”. A point that many others can learn from. As the festival gets closer I asked Jonny and Duncan what they are most looking forward to seeing. “I am really looking forward to seeing the place decked out, getting people in and feeling the buzz”. In two weeks they will get that chance, and hopefully all their hard work will be worth it.