Since starting a new job down in Brighton, I’d seen beers from the Gun Brewery available in pubs, with the logo appearing fairly regularly on pumps in the area.

Intrigued, I picked up a few cans, which were available from Brighton’s Bison bottleshop near the seafront. 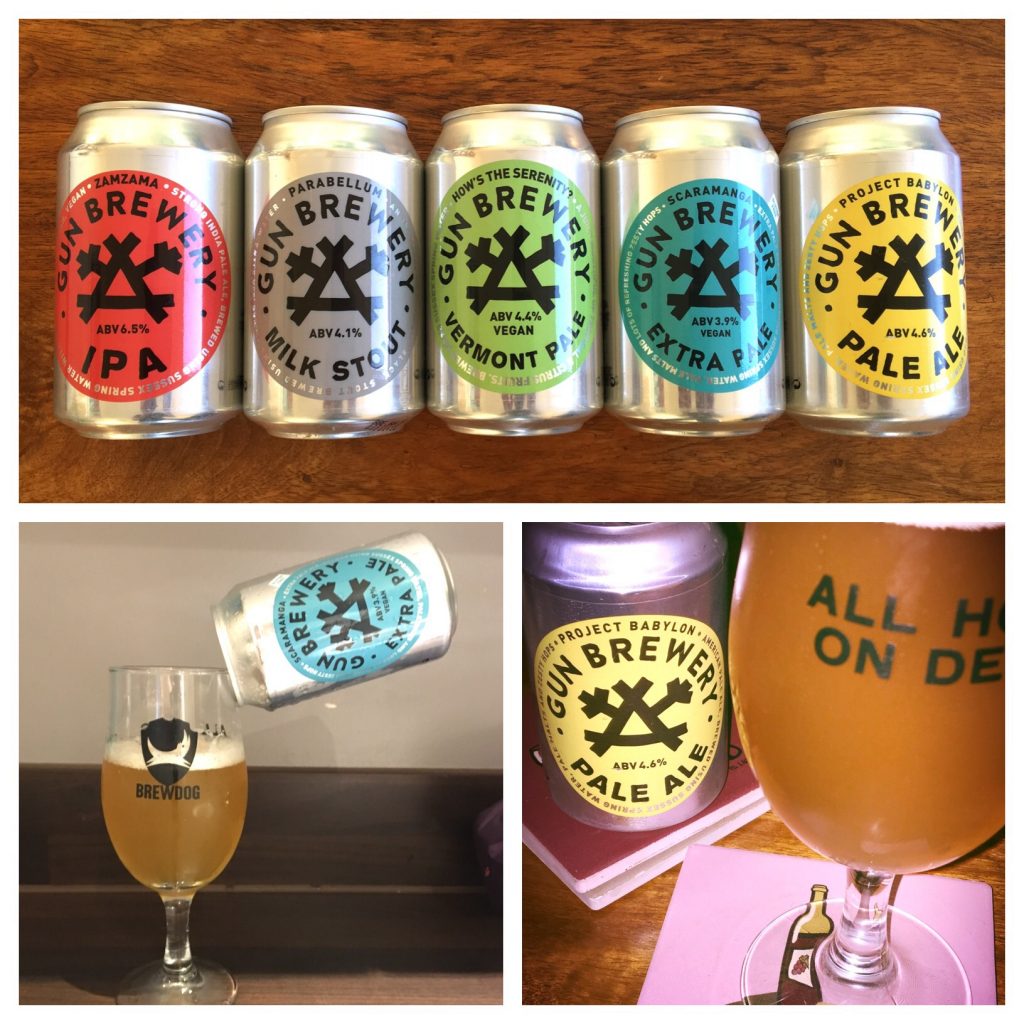 The helpful chap in Bison advised me that the East Sussex brewery is located on a farm, and gets its energy from a solar power array.

All the fresh spring water used to brew the unfiltered, un-fined beers is drawn from below the organic farm.

And to complete the impressive environmental credentials, the leftovers from the brewery are fed to livestock on the farm.

Anyway, this isn’t a meat blog! Gun actually produce a lot of gluten free and vegan beers, which I am sure are popular in with the eclectic and hipster Brighton crowd and beyond.

The striking can design for this set of beers looks fantastic, with the label colour really standing out against the silver of the can.

The name comes from Gun Hill, on top of which is where the brewery sits.

The label states that the logo comes from the Hobo Code of the US, whereby these travellers painted symbols near a house to denote the owner’s character traits.

This was also seen used in the TV series Mad Men…in a Don Draper flashback, a travelling hobo explains the code to a young Don/Dick. The hobo painted an image of a knife, which means “A dishonest man lives here”. This was because Don’s old man did not pay the hobo for the work he had performed.

So, wannabe beer barons, I do not recommend sneaking into the Gun Brewery any time soon, especially as you can pick these beers up easily from many bottleshops.

Here’s what I thought of them:

I’ve had this on draught before, and find it a light, refreshing and session-able beer.

Having not had it from the can before, it struck me how very dry and clean the taste was.

When opening, the very lively carbonation caused it to go everywhere.

I will taste again on draft – but I feel it is a beer for the summer season.

I opened this one gingerly after the previous mishap, and it was still very lively. This seems common with beers from this brewery!

I preferred this to both the Vermont Pale and the Scaramanga Extra Pale.

There was a bigger hit of hop aroma from the can, and bolder flavours.

Clean tasting again, and refreshing – after the first you want another one! 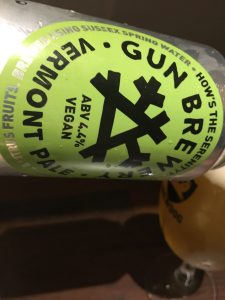 The Vermont Pale is one of Gun’s seasonal specials. It was again very dry and clean tasting with a citrus edge.

With a low ABV of 4.4 it felt a little thin, and I thought it would have a bigger flavour from the oats and wheat.

Another beer which is labelled as suitable for Vegans. 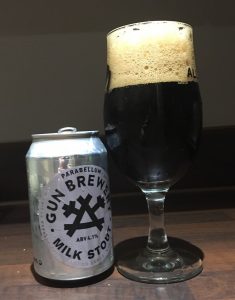 Being a stout lover, I don’t think there’s been many Milk Stouts I’ve not raved about so I’d been looking forward to this beer the most.

After sitting in the fridge for a few days, l gave this time to warm up whilst drinking it.

As it warmed, more of the flavour from the oats and chocolate malt came through. The body and mouthfeel was very good considering the low ABV of 4.1%.

This beer is non-vegan as it obviously contains lactose. Unlucky vegans.

I’ll definitely hunt for this one on cask. 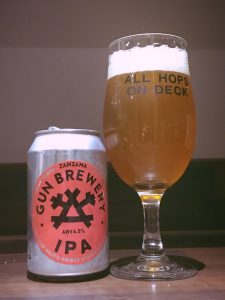 Zamzama IPA from the Gun Brewery

This turned out to be my favourite beer of the lot.

It had fantastic balance and drinkability with more body than the other pale ales.

I’d certainly prefer to drink this at home over the VPA, XPA and the Pale Ale.

So that’s a tasting of Gun’s core range, plus the Vermont Pale Ale, which is a special.

I’ll certainly look to taste more of their rotating special beers in due course.

What did you think of Gun’s beers? Leave a comment with your opinions!