Beer and Chocolate Tasting with CAMRA 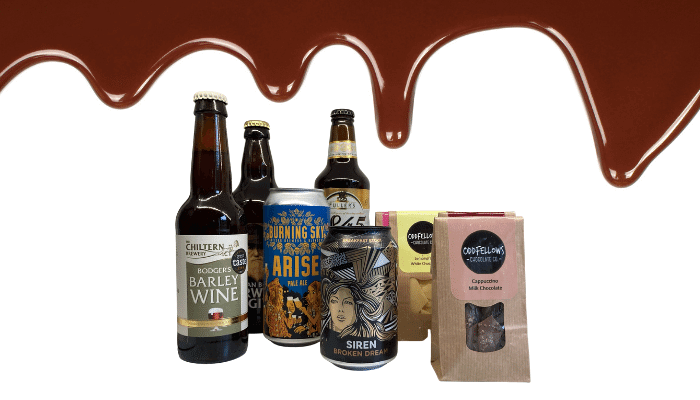 I love a square of good quality dark chocolate with an imperial stout, and it’s something I enjoyed on many a Friday evening over the past year.

I’d also missed out on the many ‘zoom tastings’ CAMRA have organised since the first COVID-19 lockdown so when I saw that there was a ‘beer and chocolate’ pairing organised for Easter, I signed up as soon as possible.

I soon received a box full of beers and different chocolates from Oddfellows Chocolate Company. This chocolate company seems to be no more, shuttering their doors at the end of 2020. CAMRA must have bought up some of the remaining stock for this event.

There were six different chocolates, ranging from ‘white chocolate & lemongrass’ to ‘dark chocolate with morello cherry’.

The event was held on Easter Sunday, the same week as UK lockdown restrictions had been lifted somewhat. I was joined by my brother. We’d had a few beers in the sun already and needless to say we arrived a few mins late as we were enjoying catching up a bit too much!

Still, it was not long before we had the beers and chocolate ready to go. 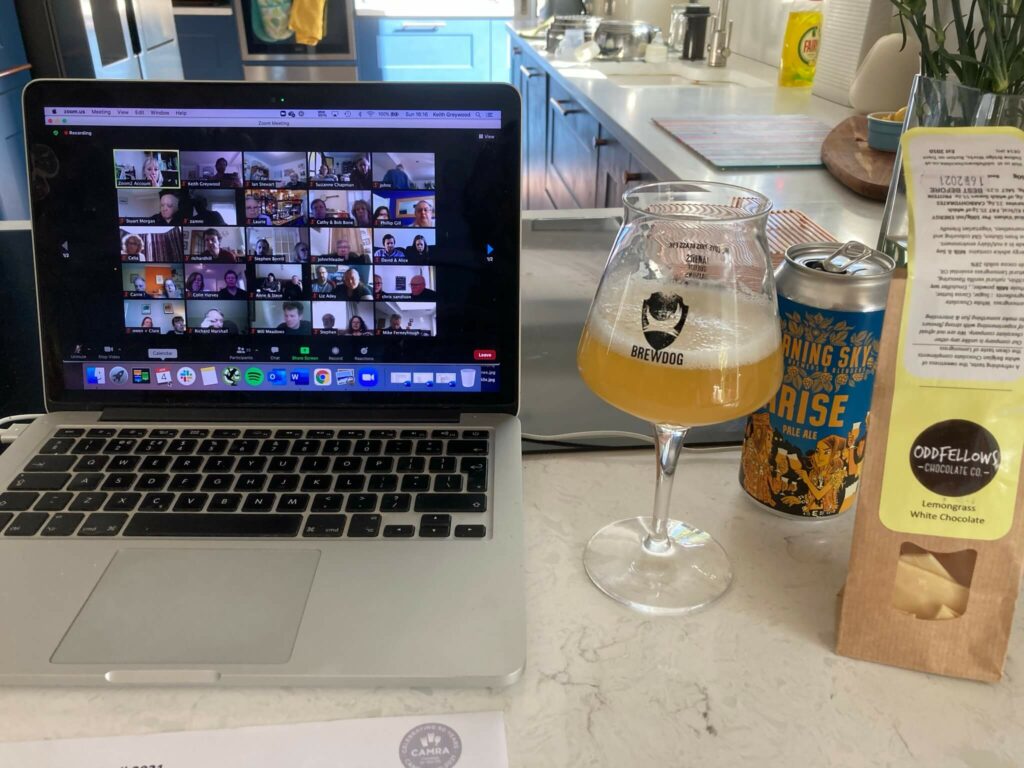 The event was hosted by CAMRA’s London tasting panel chair, Christine Cryne who did a fine job explaining how there are, in general, three ways food such as chocolate can pair with beer.

Here are the three C’s: 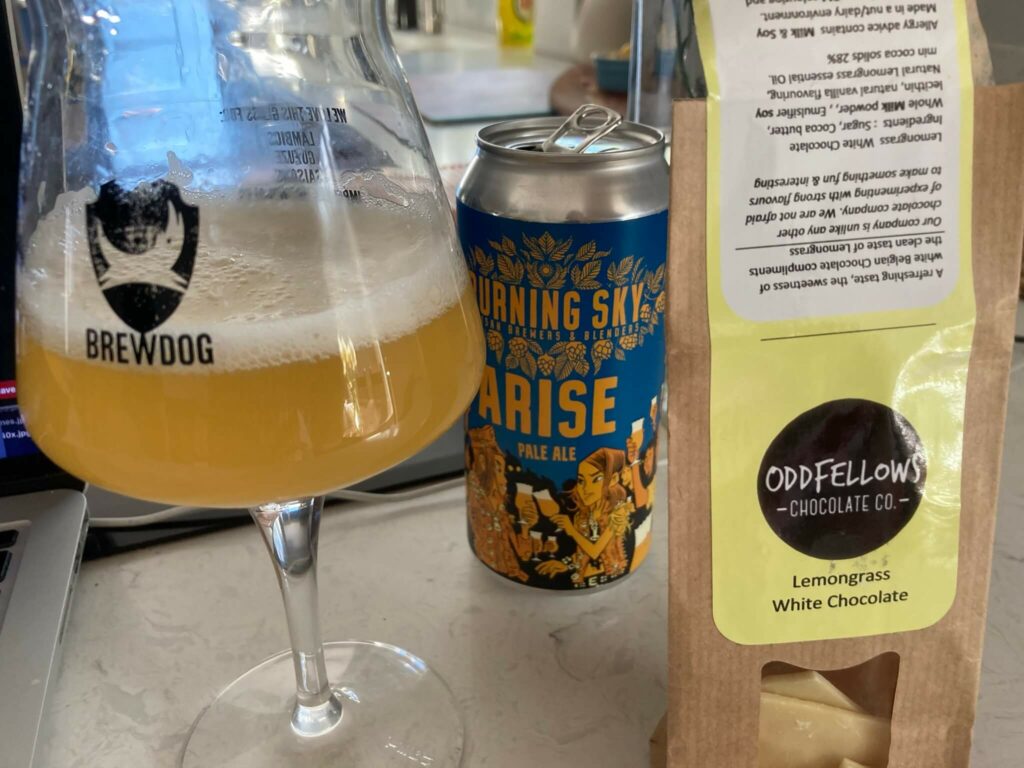 A surprising match I’d never really thought about before, the bitterness in Burning Sky’s hoppy 4.4% pale ale cuts through the creamy, sweet richness of the white chocolate, leaving a pleasant, fragrant flavour which mingles well with the bright hop character. 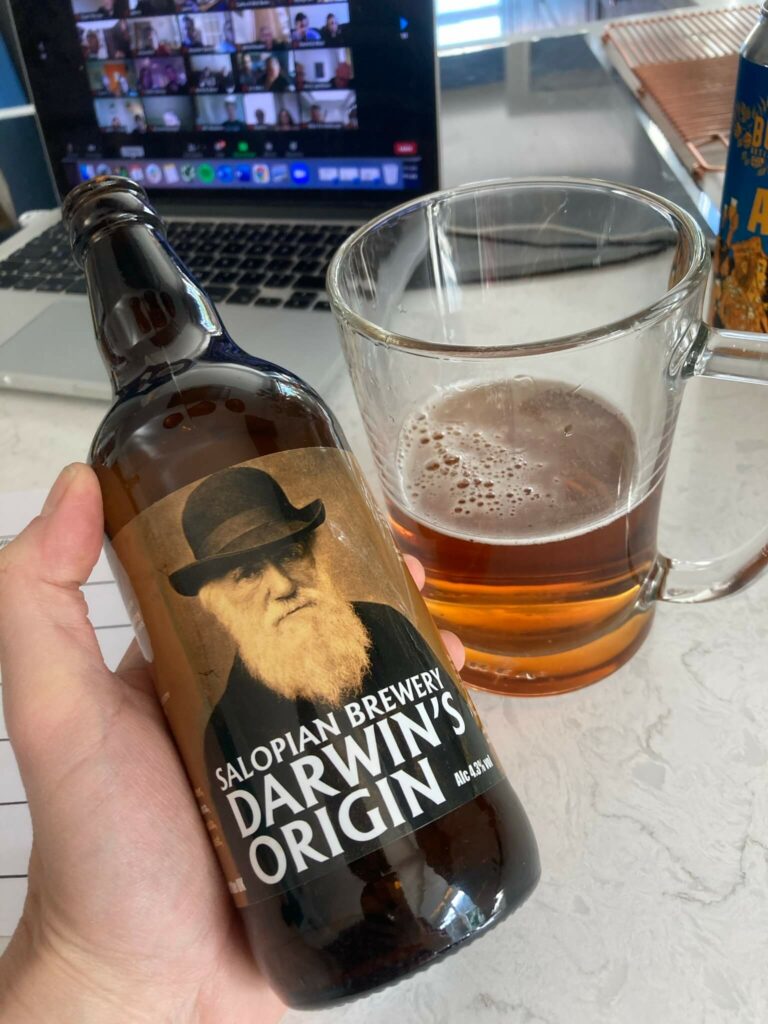 This was an interesting complementary pairing, with spiciness from the cinnamon bringing out toffee notes on the copper-coloured bitter’s finish.

This beer and chocolate was my brother’s favourite pairing of the day, producing a large grin and surprising him with how well it worked together. 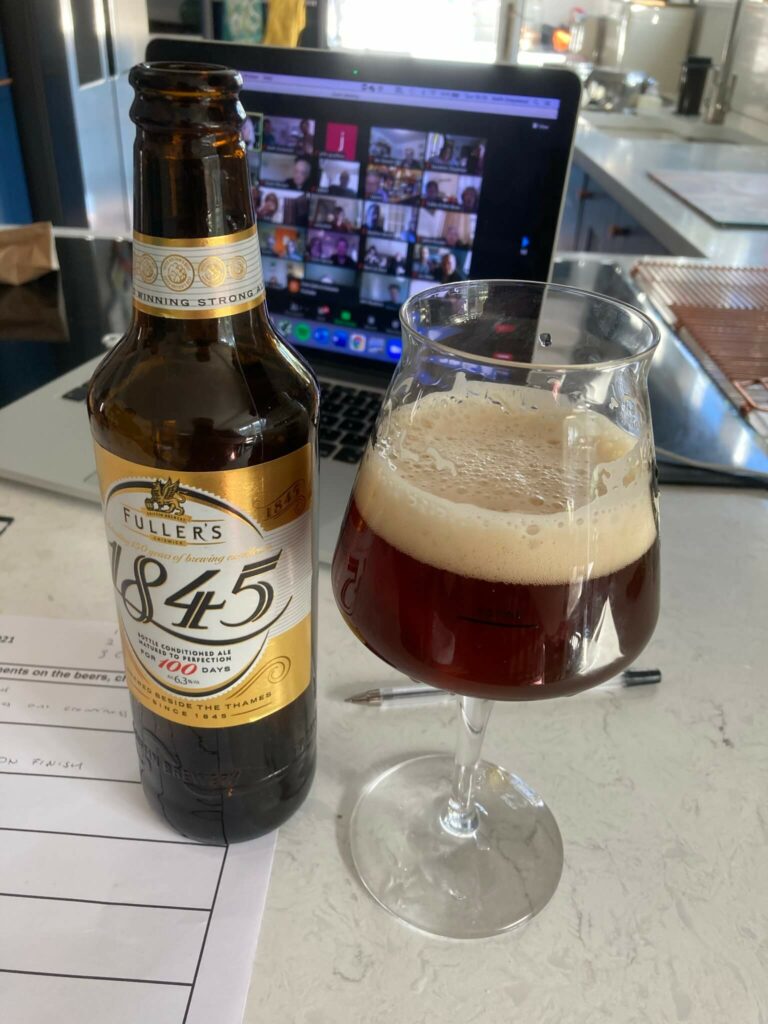 Now, onto some of the stronger beers, with the bottle-conditioned 6.3% 1845 is richer on the palate, with deep caramel and marmalade flavours.

The 1845 is a dark ruby red in colour, uses an amber malt that is full-bodied and is considered a great beer to pair with cheese and chocolate by Christine.

The salt lifts the chocolate and gives it a creamy finish and goes on to highlight the beer’s fudge malt flavours.

Christine stated that she ages 1845 at least 2 years so it is close to the best before date.  As it ages it becomes more complex and less harsh and works even better with food.

I was lucky enough to receive an aged one with a 2021 best before date and can confirm it was very good indeed. 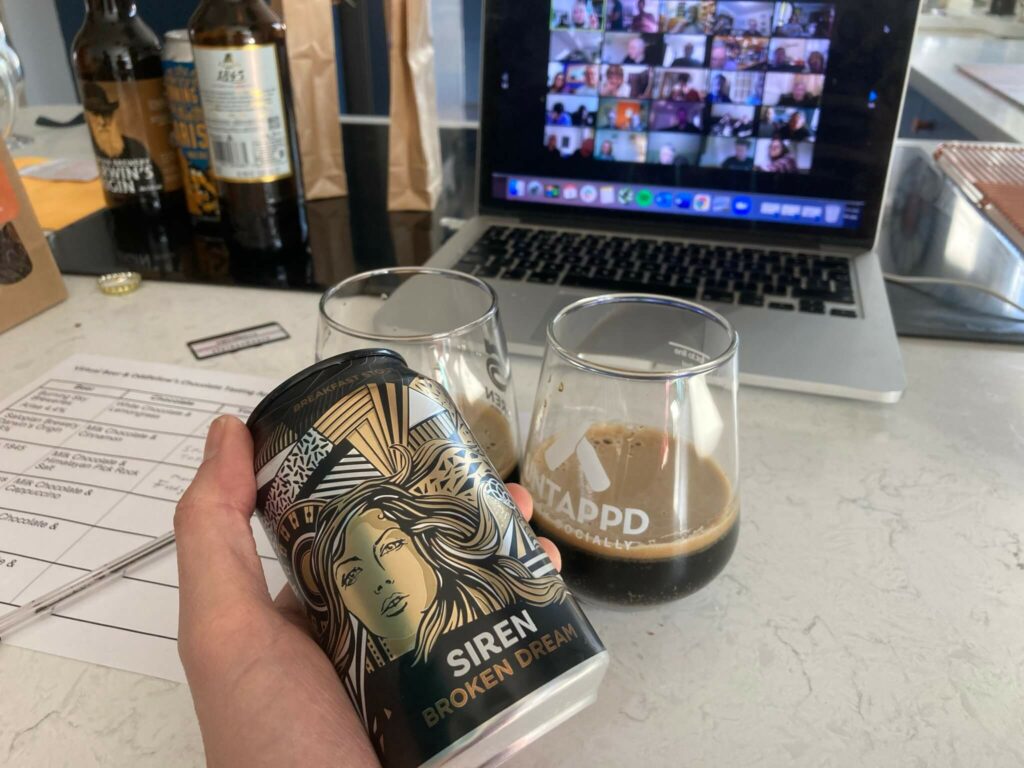 A coffee stout with a coffee chocolate. Luckily, unlike Mrs Bacchanalian, I do love the taste of coffee so I was keen on this pairing,

Surprisingly not my favourite pairing of the day, but this was partly my fault, as I’d not prepared the beers correctly and the beer needed more time to warm up. As it did, more fruitiness did come through and the pairing worked better than I initially thought.

A pitch black beer with an ‘oyster head’ and a strong coffee aroma, there is a slight sweetness with a dry finish from the dark malts.

This is a classic example of a complementary pairing as both the chocolate and the beer work in harmony, even enhancing flavours present in each. 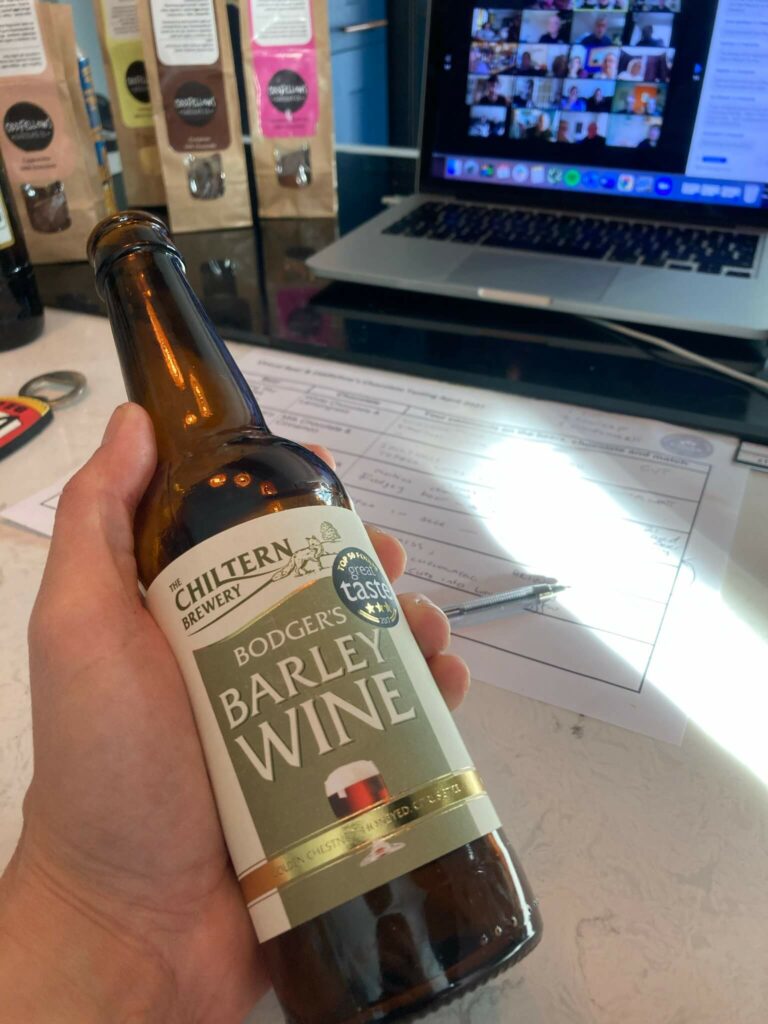 The chocolate here brings out lovely orange flavours in this barley wine and the dark chocolate helps ease the beer’s sweetness.

At 8.5%, this is another strong beer that can get better with age. An amber colour with a sweet honey nose. Very rich with orange fruit flavours and a long finish.

As the chocolate is dark, it’s drier with a slight bitterness with an orange character which develops.

If a white chocolate was eaten with such a sweet beer it would be too sickly sweet for most palates.

The final tasting involved matching the cherry chocolate with the previous three beers to see what we thought matched best.

I really liked pairing this with the 1845, but that may be because I really like that beer.

I’ll certainly be looking to further practise my beer and chocolate pairings from now on!