London Marathon – 26.2 Miles is a Long Way to Travel for a Free Pint 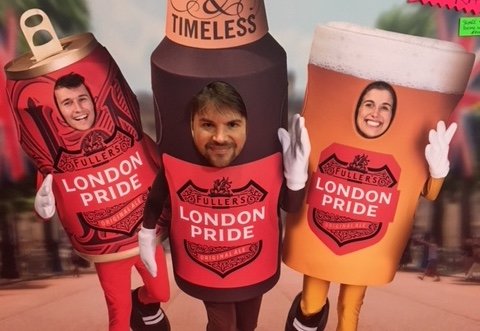 This year I managed to fulfil an ambition I’ve had for some time.

I completed the London Marathon. Not only that, it turns out it was the hottest on record!

Having volunteered several times at charity cheering points in the past, I was expecting the crowd to be fantastic.

I was not disappointed.

An intense vocal support lined the streets in their droves, cheering on Mo Farah and everyone else as they ran, walked or waddled past.

Although I found the actual running part difficult, plodding past the 18 mile marker in searing heat whilst well-wishers gulped an ice cold beer was especially hard to take.

A lukewarm bottle of Buxton water is not quite the same.

Having said that, I was pretty impressed by a rapid chap, James Poole, who stated he had a beer at mile 24.

I was not in the state to do likewise.

As I progressed, the heat took it’s toll and I hobbled across the finish line after a gruelling 5 hours 8 minutes and 42 seconds.

After the event, I was due to meet hardy familial supporters at The Antelope pub in West London.

A few days before the event, I imagined I’d be able to have a leisurely saunter around the 26 mile course, collect the medal, get a photo, before briskly walking to the pub. I’d then demolish a roast chicken or two, and wash this down with a good three or four pints.

But alas, I was so full of gel, Lucozade and jelly babies that I could barely eat a chip afterwards, let alone a roast chicken.

Still, after some time cooling down outside, I did finally feel normal enough to gulp down a fine pint of Southern Star from Fullers’s.

It tasted amazing, but that was it. I was then off home to get a shower and ice my legs.

As a bonus, I still have two vouchers for free pints of London Pride to use this month!