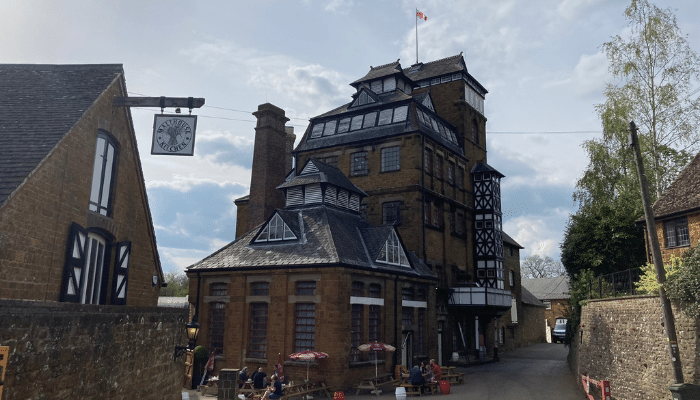 I did not realise where I was staying in the Cotswolds was so close to Hook Norton Brewery, which I’ve been keen on seeing for myself for some time. I was only in the area for a few days, but I did get the chance for a flying visit with the whole family for a drink in the sun.

Dating from 1872, the three-story brewery dominates the stunning small village of Hook Norton. As we entered the village it could not be missed. As I emerged from the car from a windy journey through some country lanes, a pungent stench from the brewery filled my nostrils.

The shop was extensive. I somehow ended up getting a stuffed dray horse for my daughter after she would not put it down and I, of course, had to buy a box of bottled ales. My dog also enjoyed himself, being fussed (and fed) by the friendly lady working on the till.

There was time to get in a few drinks, so after this, I secured an outdoor table to head to the bar. I’ve not been out too much recently but I was glad to see that there was a special beer in support of Ukraine. I now realise this is something which a lot of breweries have got on board with, but this was the first time I’d seen it in the wild.

This was a delicious beer, and a real treat to get real ale as complex and dark as this on cask.

I picked up a box of Hook Norton beers to take home, and I spent several months making my way through them all. All were very high-quality beers, but I was especially glad to drink their strong ‘172’ lager. This beer was a whopping 7.2&, which I did not realise at first. It has a sensational strong malt flavour. I give it 4.5 cheers out of five. Other beers of note was the Double Stout and Hooky Mild.

If I get to visit again, I’ll certainly try and book the tour to really understand this historic brewery.