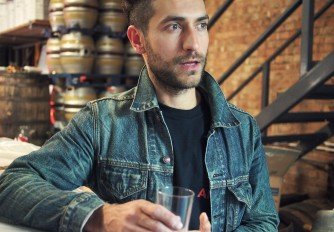 It’s a cold bright day in Hackney Wick. A mist is draped over the barges on the canal, the sun bounces off the frost covered surfaces. Most of this area is a sprawling, unimpressive industrial estate, which only adds to its hipster credentials. It’s also fairly recently become quite a hotspot for beer. Outside a warehouse we find Logan Plant, owner and brewer of the increasingly popular Beavertown. If there were ever going to be a calendar sporting UK brewers, Logan would be Mr April. He’s probably the most handsome man in brewing. He’s young, energetic and a thoroughly pleasant guy. And lucky for us he’s also obsessed with beer. His brewery has only been around for a year and a half but has already managed to gain widespread respect. We wanted to know more, so we sat down for a chat about where his dedication to beer comes from, and where it’s taking him.

Logan’s dad is the acclaimed Robert Plant of Led Zeppelin fame. As well as being an iconic musician he’s also one of the instigators of Logan’s beer obsession. “I got dragged around loads of pubs. By my old man. Enduring many a beer garden. When I got to the age of 18 or 19, I started going out with my friends, and inevitably got into the beer. All of a sudden we found ourselves making a pilgrimage every Thursday, Friday, Saturday, to certain pubs to drink certain beers.” This was out in the Black Country in the West Midlands, and the beer they so eagerly sought out was made by small local breweries, ensuring that it was, as Logan puts it, “fresh as a daisy”. But he wasn’t just content with drinking the stuff, he realised early on that he wanted to start his own brewery. “I was maybe 20 years old. I looked into the ideal area where I might set it up. It wasn’t London, at the time. It was on a mountain somewhere, in the middle of nowhere. That’s what started me. That homage to the Midlands.”

The brewery dreams remained just dreams for over 10 years. Logan was busy living up to his family’s rock heritage as lead singer of the band ‘Sons Of Albion’. From what I can gather online, they seemed to be doing pretty well with their dark and harmonious rock (there are clips on YouTube). He was also working in the event industry in London, which exposed him to a lot of good food and drink. “It trained my palate – the right kind of food served with the right kind of wine or beer. I started to get a real appreciation of it.” Then one day, after a gig in New York, Logan had a career changing experience. “I was starving, and a lady told me to go to this barbecue place over the road. I walked in there and the place was amazing. There was BBQ everywhere. There were beers coming out of the walls. There were big jugs of beer on the table, and it just hit me, “fuck, this is it”. This is what I had in my head back when I was twenty.” When he got back to London he quit the band, got a haircut and started working on opening his own barbecue joint. He also started home brewing, with the aim to brew beer that would pair well with the food.

The result of his toil was the Duke’s Brew & Que, opening doors to feed people delicious ribs and beer in the summer of 2012. Logan’s job was to head up the brewery part of the business. “I started home brewing, specifically towards our menu, to the beef ribs and the pork ribs. I brewed the Smog Rocket, the smoked porter, with the smokiness and molasses notes, to go with the beef. And then the spicy earthiness of the Rye (8 Ball) to go with the pork.” They quickly became a hit and Logan got instant feedback on his beer, which allowed him to tweak the recipes as the brewery grew. Now it has grown so much they’ve moved out of the restaurant and up here to Hackney, which is actually more of just a pit stop. Come springtime and they’ll move again, this time to Tottenham Hale and to a much bigger brewery. There have been a flurry of new small breweries opening up, but Beavertown is aiming high. Logan doesn’t want it to stay small. “We want the brewery to go as far and wide as possible, I don’t want to keep it a London brewery.”

The inside of their current brewery is a stark contrast to the bright, crisp day outside. It’s a dark maze filled with bottles and key kegs. Around every corner is a barrel with something fermenting inside. One of them containing a Wild Beer collaboration brew, a Brown Sour. Today they’re brewing Gamma Ray, twice. This American Pale Ale has quickly become a staple around London. It was invented after James Rylance, now lead brewer, joined early on in the process. Today they are several employees, all chipping in, doing what’s necessary to run a successful brewery. Logan is very keen on everyone being able to contribute with ideas for what to brew next. Experimentation and trial is another thing that’s integral to their DNA. Their experimental concoctions are all brewed under the Alpha Series label, and the ones that are the most delicious get brewed on rotation as a part of their core range. “Putting a curveball out there is great. As brewers we want to push the dimensions of what beer can be. I think that’s what we try to do with a lot of our offers, like the Barley Champagne, which is a Bramley apple Saison, but we try to make it this tart champagne like beer. And the Bramley apples suit it so well. It’s a concept. It’s not really a pale ale or a saison or a sour. It’s good to break those categories.”

Logan’s got big plans. That much is evident. But although they’re under massive expansion they won’t stop experimenting. The plan is to use their current kit for the Alpha series when they move to the new brewery. So not less, but more experimentation. Huzzah. We’re talking barrel aging, infusions and sours. They’re even planning to start a constant sour. “Basically every three months we’d rack it, leave a bit in and fill it back up and let the sour go again, and put it into our core range. We just don’t have the capabilities yet. But we will.”

Their new Tottenham brewery is going to be another milestone for them. They’re even hiring a new head brewer. “She’s really well experienced and a great lady. She’s worked on a big kit before. She’s gone through and been educated, while we’re just crazy home brewers. There’s only so much you can do by reading and experimenting, it’s good to also have that side to it. That background and knowledge.” It’s quite a humble move to realise you need professional help. They could’ve been all Gung-ho about it and just kept on blindly. But Logan seems focused on success, and eager to make a great big brewery. So not only is he a good brewer, he’s also a great business man. Add his handsomeness to the mix and you suddenly have a lot of reason to hate him. If he just wasn’t so goddamn nice all the time.

Logan’s ultimate dream is a world where everyone can easily buy delicious beer, wherever they are. “Now you’ve got people like Oddbins buying loads of craft beer. And Byron Burger, who’s also jumping on. It can only be a good thing for us as brewers and also the general beer market. It’s something we all been battling for. Hopefully the bigger boys, Sainsbury’s, Waitrose, can’t just keep pushing £1.60 a bottle beer that’s 4%. If they invested a little bit more, and realised that it’s a premium based product. Yes, this bottle is going to be 3 quid, but people will buy it because it’s great. I think they’re starting to come around to this realisation.” As a dedicated drinker I welcome this kind of sentiment from a brewery. Especially one as good as Beavertown. It’s this kind of ambition that sets Logan apart from a lot of other brewers. Usually they’re content with a bit of growth, but as long as they can sell their beer, as freshly as possible, they’re happy. But not Logan. He’s fully aware that running a brewery is a business. “The brewery is more than just a bottle of beer. Especially if we’re going to survive in what’s a pretty rampant market. I want people to drink Beavertown.”

I feel confident that Logan has a bright future. I’m looking forward to seeing where he’s steering the good ship Beavertown. When we leave Logan has to sit down and sign 700 bottles of their new barrel aged stouts, the Heavy Water and the Imperial Lord Smog Almighty. He says this is a big moment for them. I don’t know how many autographs he gave during his rock star career, but I’m happy he gave that up to become a brewer.