An Introduction to Beer and Cheese Pairing 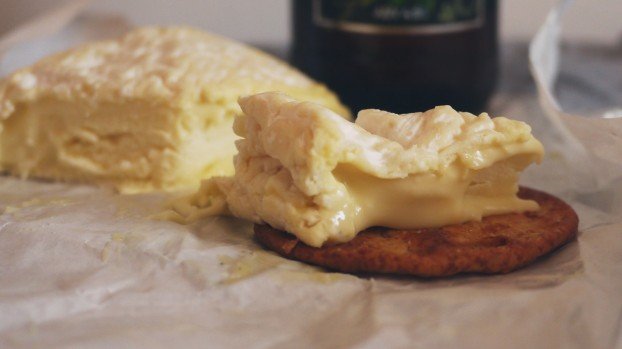 My love for craft beer first blossomed several years ago, around the same time I started work as a cheesemonger at a gourmet grocery store in Manhattan.

On humid evenings, after the closing shift, ponging of cheese and aching from hauling around 20-kilo wheels of Gouda, I’d run off to a nearby beer store and pick up a bottle of something interesting to enjoy with whatever cheese I’d nicked a slab of that day.

My kleptomania helped me discover first hand what has become a well-known fact: cheese and beer go really, really well together. Wine may get all the press as a cheese-pairing partner, but its acidity and tannins mean it can be tricky to get right.

It waltzes with the stinky ones, balances the pungent blues and mellows alongside mild goat curd. Because of craft beer’s sheer breadth and diversity of styles, there isn’t much that it can’t complement.

Given how much there is to learn about both beer and cheese, devising good pairings might seem like a minor form of sorcery. How to possibly work out what goes with what?

The first rule of pairing is simple: like goes with like. A citrusy Hefeweizen? That’ll do nicely with a light and tangy goat cheese. A rich, caramel-y Gouda? That’d go best with a beer with sweetness and some serious body.

On the other hand, you can also play around with beers that contradict their cheese partners. Want something to temper the intense creaminess of a Brie? A hoppy beer cuts through fat like a hot knife, and picks up spice notes well too.

Given that we’re reaping an unprecedented bounty of craft beers in this present moment (and that we live in a cheese-loving land), now’s the time to brush up.

These five pairings cover the basics, and though I’ve ordered them from lightest to heaviest, feel free to play around. Londoners can find these all-British cheeses at the estimable Neal’s Yard Dairy, while the brews were bought at Uto Beer in Borough Market and Kris Wines in Camden. 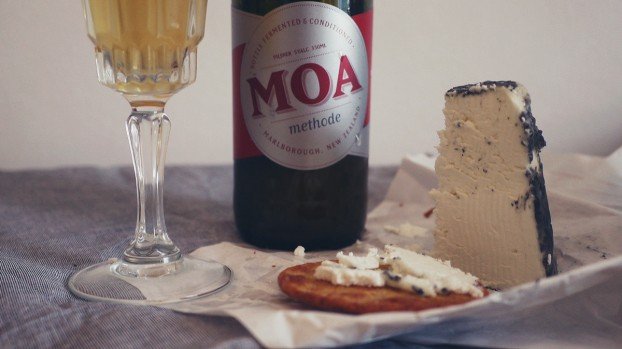 Goat cheese can be controversial for some (no, it shouldn’t actually taste like goat). Don’t be afraid. For most of us its lemony tang and creaminess make it immensely appealing.

The Dorstone is produced by Neal’s Yard Creamery in Herefordshire. For me, this is a perfect goat cheese. Not too dense, with a texture that borders on the mousse-like. It’s more potent than fresh curd, but still subtle and delicate, with a fair amount of saltiness.

And don’t be put off by its appearance. That’s vegetable ash, not mold, which is used as a traditional preservative agent.

Because of their delicacy goat cheeses go best with beers that are also gentle on the palate. Think golden hue, effervescence, and crisp flavours.

This spritzy German-style pilsner, which hails from New Zealand, makes for a perfect match. The first sip of Moa Methode introduces a little bit of fruit flavors. Soon after, the fruit passes by and reveals a beer that’s dry, hop-forward, and even a bit herbal. Its bitterness undoes the goat’s richness, and the herbal quality matches the cheese’s salty subtlety, tenor for tenor. 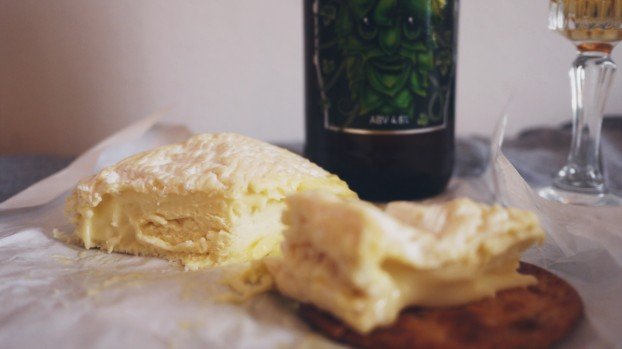 Just look at this cheese. It’s called Tunworth, and it’s a real stunner. Hailing from Hampshire and made with pasteurised cow’s milk,

Tunworth on its own is a luscious and buttery affair that oozes more the warmer it gets. It’s a bloomy-rind cheese, meaning that it’s in the Brie and Camembert family and sports a smart, downy rind that’s perfectly edible. But unlike those French styles, it’s mild, featuring only a slight bit of the mushroomy earthiness that’s unmissable in the Gallic versions.

What would do this cheese justice?

Being a Yank, I can’t get enough of American-bred Citra hops and their pineapple and mango flavours.

Oakham Ales was the first British brewery to use this hop variety commercially back in 2009, and this Citra-heavy beer marries ever so well with the Tunworth.

The first sip offers up big bursts of aromatic fruit, but quickly tapers off into a dry, slightly bitter finish. Those early flavours pick up the sweet cream in the Tunworth before the finishing hops come in and slice right through the milkfat.

As in the best marriages, these two balance each other out. 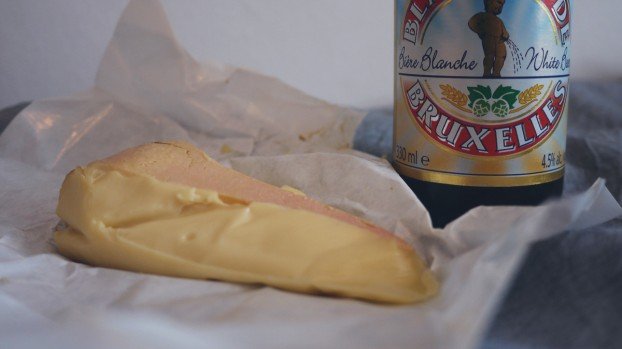 Stinking Bishop is one of those cheeses that’ll get you in trouble with both strangers and loved ones. Carrying it home on the tube earned me the ire of a few innocent bystanders, and to say it overpowered my fridge would be putting it lightly.

This, my friends, is a smelly cheese.

Stinking Bishop gets its perfume from a pear cider bath. In the washed rind family, cheeses are bathed at intervals with brine, cider, or sometimes beer, a process that gives them that unmistakable pong.

This version, hailing from Gloucestershire, is a classic of the style, with its oozy but slightly pasty interior and sticky, orange rind.

Compared to its aroma, the Bishop’s flavour is almost restrained: earthy, slightly sweet, and even a bit floral.

Nothing does better with that tasting profile than a good Belgian ale, and Blanche de Bruxelles, a classic white ale from Brasserie Lefebvre, makes for an ideal sparring partner.

Sweet, effervescent, citrusy with just the faintest shadow of Belgian spicing. Its bubbly body helps counterbalance the cheese’s texture while its fruit picks up that cider wash. 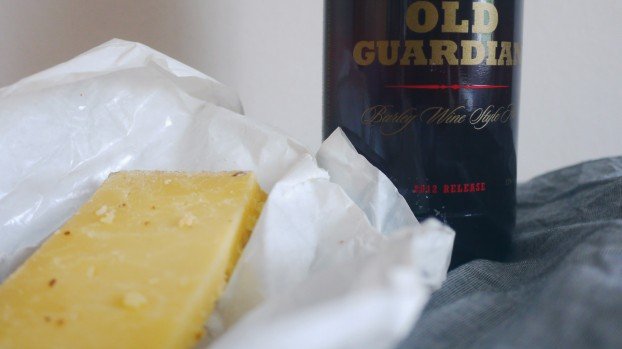 No good pairing session would be complete without cheddar, and Somerset’s Westcombe is a model of the style. Made from unpasteurised cow’s milk and sheathed in cloth, this semi-firm cheese when young is crumbly, sharp and the slightest bit vegetal. As it ages, it hardens and takes on nut and caramel tones.

For a big, brawny cheese like this you need a correspondingly potent beer, and California’s Stone Brewing Company provides the goods in the form of its annual Old Guardian Barley Wine. Clocking in at a knockout 11% ABV, the 2012 bottle is everything you’d want from the style: a viscous and honeyed body, deep burnt sugar and bready flavours, and a seriously boozy nose.

Together, these two heavyweights are well matched, and their shared flavour profiles make for a seamless pairing. 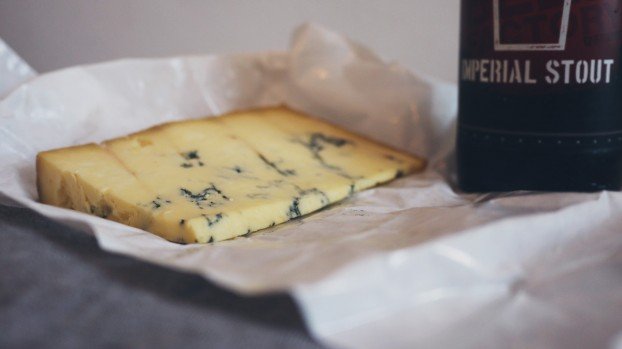 Ah, blue cheese – traditionally not the easiest pairing, especially when the specimen in question tends towards the biting, acidic and powerful.

Colston Bassett Stilton is the blue British staple, and it doesn’t get quite as intense as some other blues out there (looking at you, Cabrales). But it’s definitely robust: earthy, powerful and even a bit musty, with a piquant bite.

In order to match a cheese of this calibre you need a beer with equal force, i.e. a thick, tongue-coating mouthfeel and big flavours.

While an Imperial Stout might at first seem like an odd choice, it’s a style that’s known for sweetness, coffee and chocolate flavours – it pairs a treat with Stilton.

Bristol Beer Factory’s Imperial Stout is perfectly rich and indulgent, with a brown, frothy head and big chocolate notes. The beer mellows out the cheese’s sharper edges, and has enough body to counteract some of the Stilton’s stronger tendencies.

Though these recommendations are tried and tested, there are no correct answers with pairing.

The idea of beer and cheese pairings is still developing, so there’s lots of room for exploring. And really, it’s best that way – all the more reason to sample both as much as possible.

Originally posted on the evening brews by Claire Bullen. Claire’s book ‘The Beer Lovers Table’ is out now.