Restaurant chains are having a hard time of it, even in London, which means it must be doubly tough for the many independents who operate. No-shows, increasing staffing and ingredient costs and high business rates all contribute to the added pressure on restauranteurs.

With that in mind, I am keen to re-visit those who provide great service, food and experience.

Do you have to pay a bit more for these three things? Perhaps, but in my eyes it’s usually worth it.

With this in mind, I was glad to get one of the last red-hot tickets to Little Viet Kitchen’s monthly Supperclub, which was held on Sunday night. 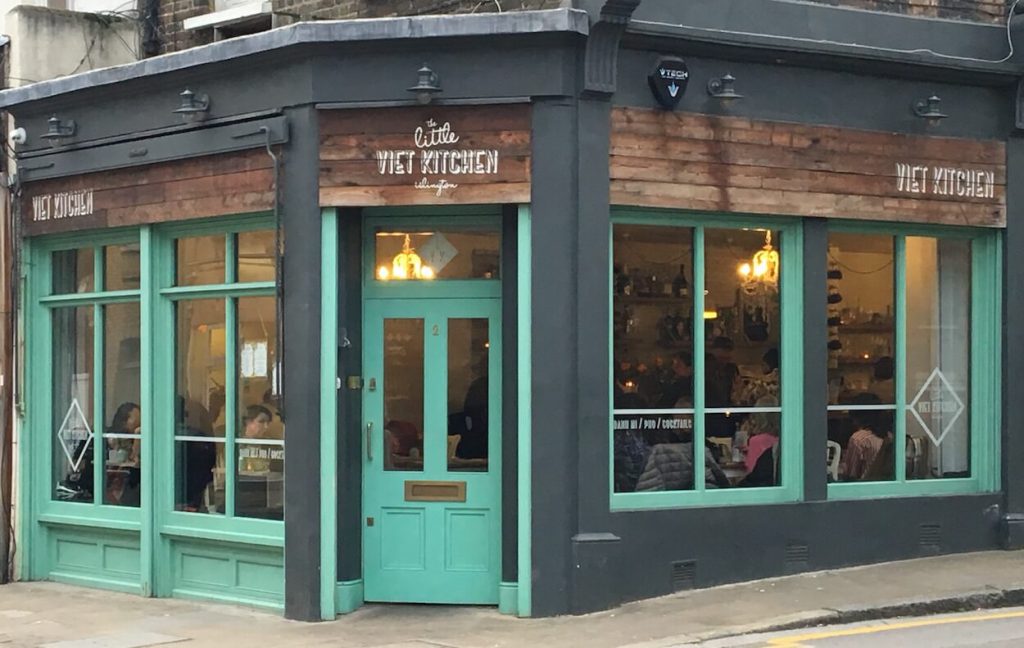 I’d been to the Chapel market-based restaurant previously a month or so ago, being very impressed with the beef shortrib curry.

Here’s the menu with detail on each of the five courses. 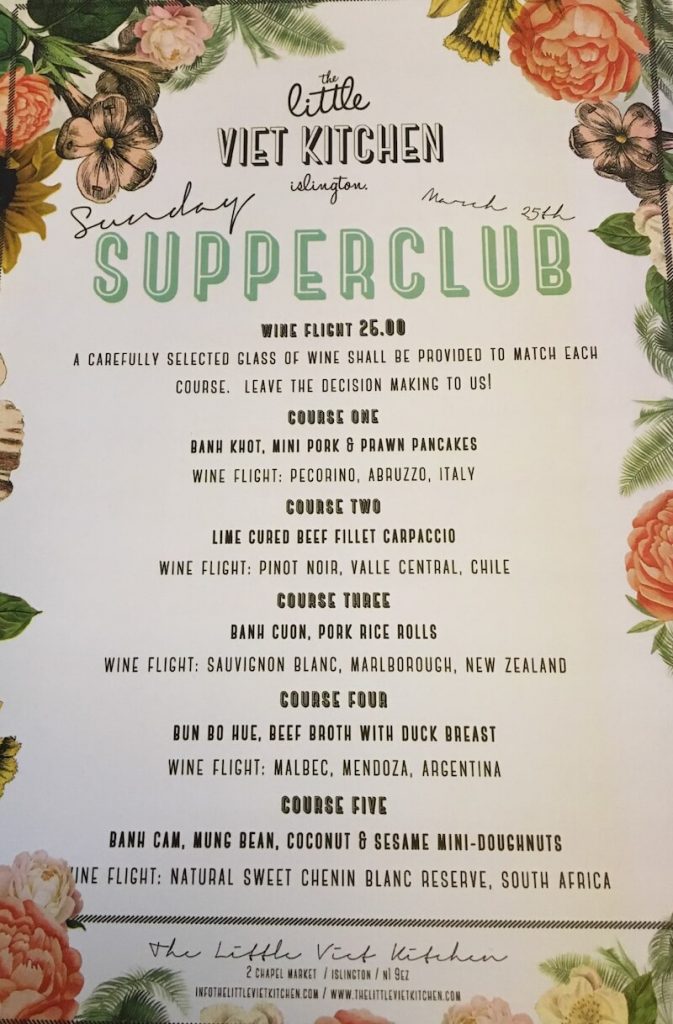 Before the evening, Thuy explained the dishes in detail, with added colour provided by stories of her upbringing in Vietnam, and on her journey to become a chef in her own right after living in London. 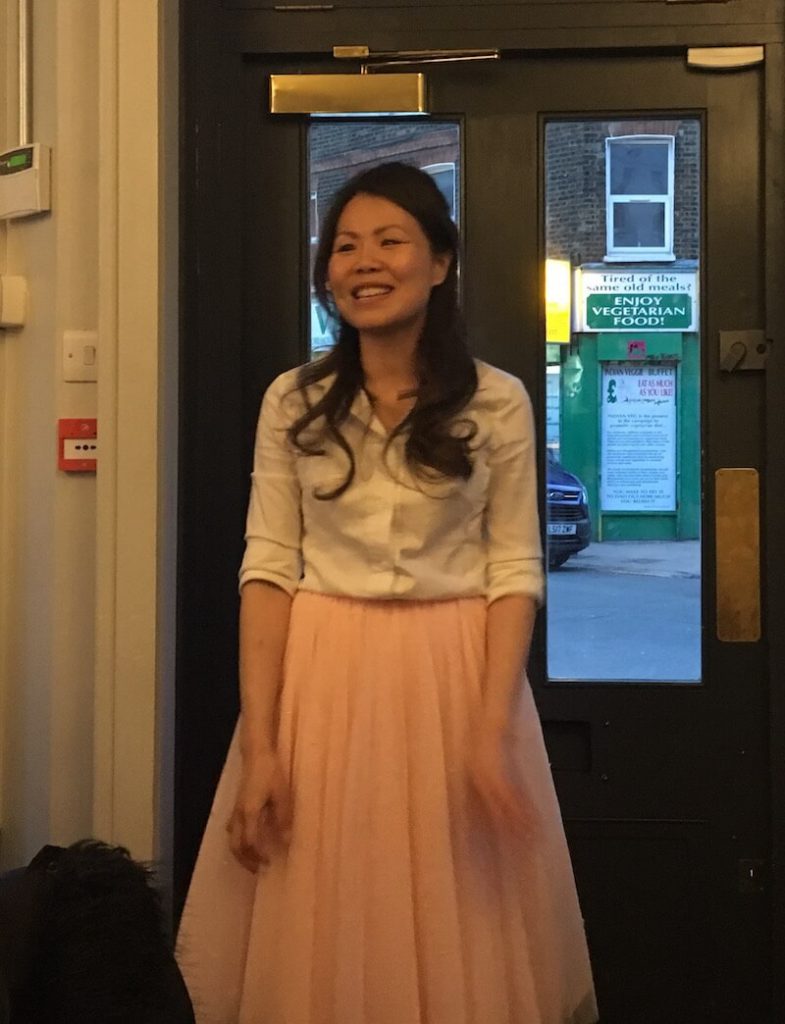 I’m a complete novice when it comes to Vietnamese food, and even the country itself, with most of my knowledge seeming to be made up of a notable old Top Gear episode. This followed the familiar format of Messrs Clarkson and May goading fussy-eater Richard Hammond with random bits miscellaneous food from roadside cooking stations in-between their scooter-saddled road trip.

She grew up in the markets of southern Vietnam, helping her mother sell produce as well as cook.

Many of the dishes on the menu were inspired by her Mum’s original recipe and techniques, as well as the food she experienced. Some have been adapted so they can work in a service, as well as adding a few western twists.

Course one was the Banh Khot, a mini pork and prawn pancake. This is an almost bite-size piece of street food – raised up a notch with a topping of caviar.

The pancake is filled with pork and topped with a single, juicy prawn. This had me licking my fingers in glee as juice escaped – just how street food should be.

A fun appetiser to start the meal. 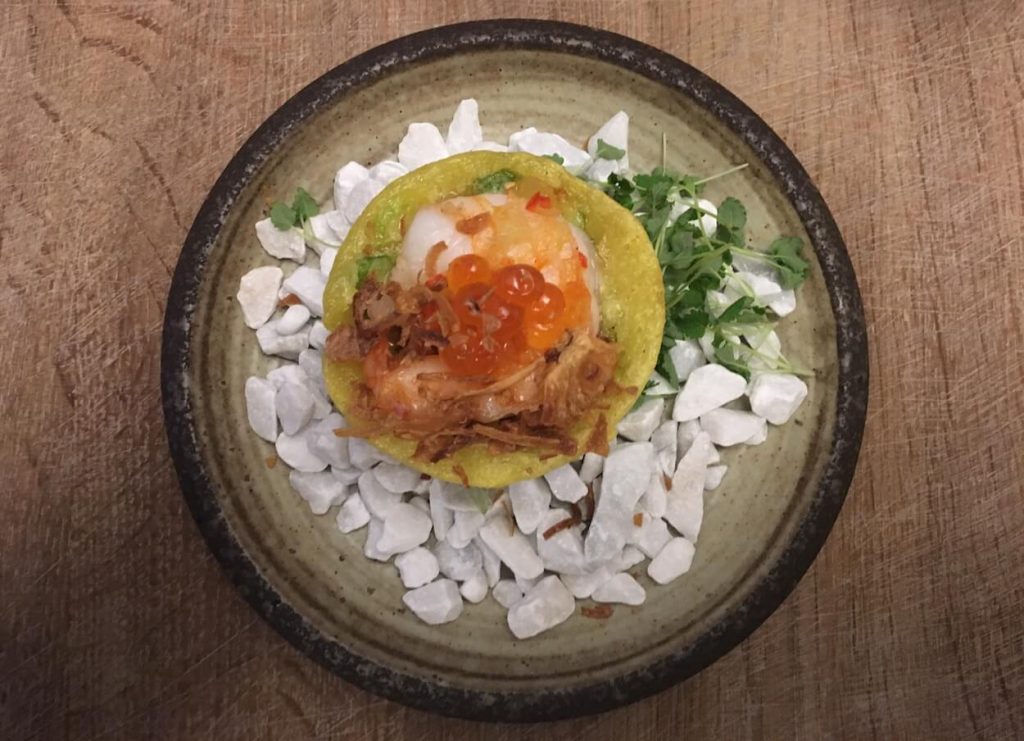 The lime-cured beef fillet carpaccio was next. Flecked with chilli, the initial burst of heat was followed with an orange peel-flavoured sweet finish, provided by what looked like a miniature clementine. The meat itself was fantastic, melting in the mouth.

Added together, this simple dish was perfectly balanced, and was probably one of the best things I’ve ever eaten. 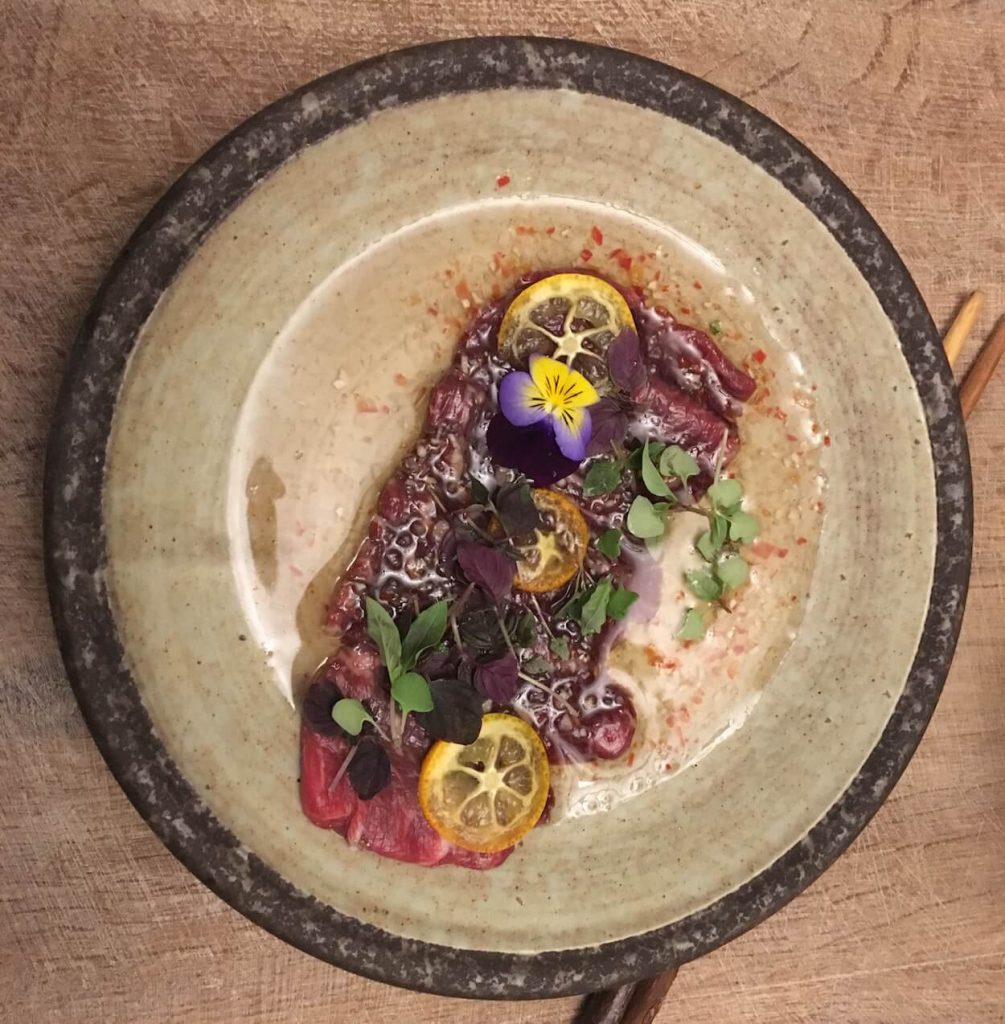 The Banh Cuon were pork rice rolls served with a a salad of julienned vegetables, meat and egg.

Tasted separately, each part by itself could seem somewhat bland after the previous fireworks, but mixing together resulted in a fresh, light salad with subtle flavours. This was my wife’s favourite dish of the evening. 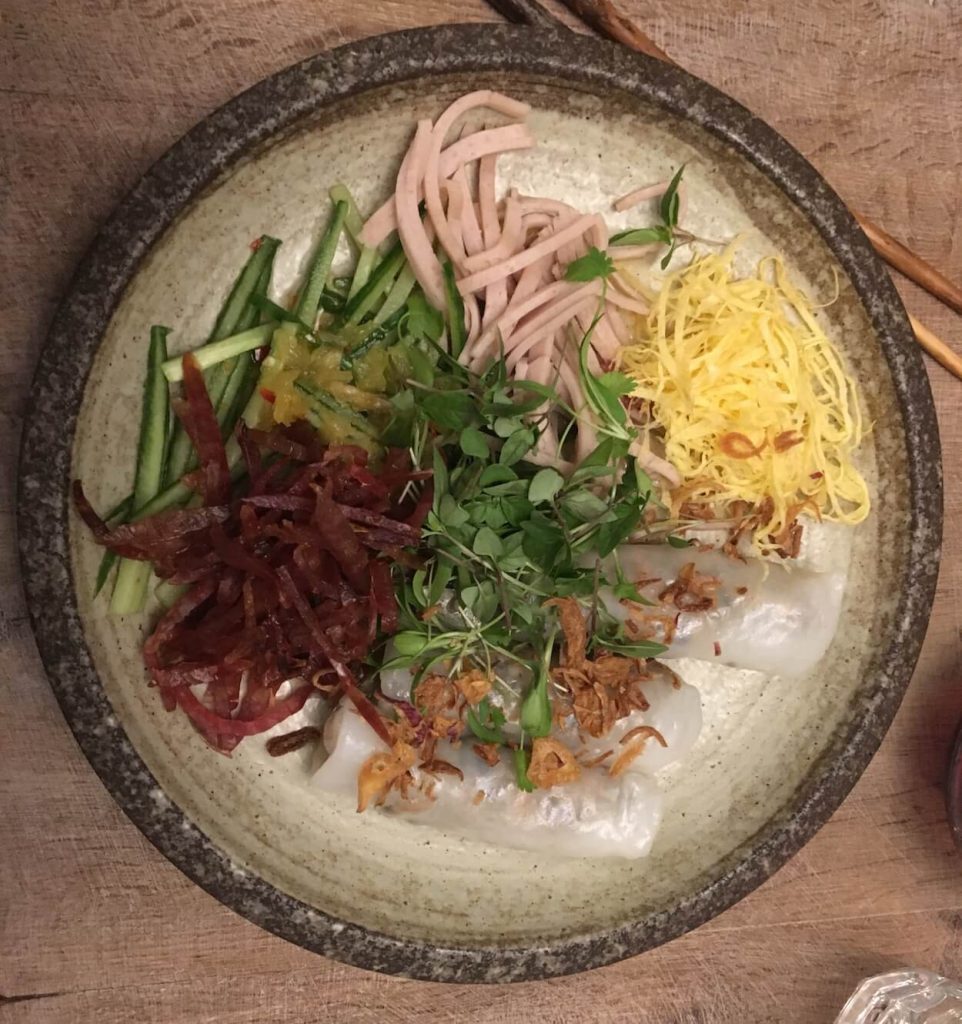 Before the next course, Thuy explained how Bun Bo Hue is cooked, and how her mother used to sometimes start cooking in the middle of the night so it would be ready for lunch.

This broth that can easily involve 8-10 hours of cooking time to get right.

As promised, it was all about the broth. There was an incredible depth of flavour. Everything in the dish is almost secondary to this, even the duck, but the bunch of mint and lime bring welcome freshness to the dish. 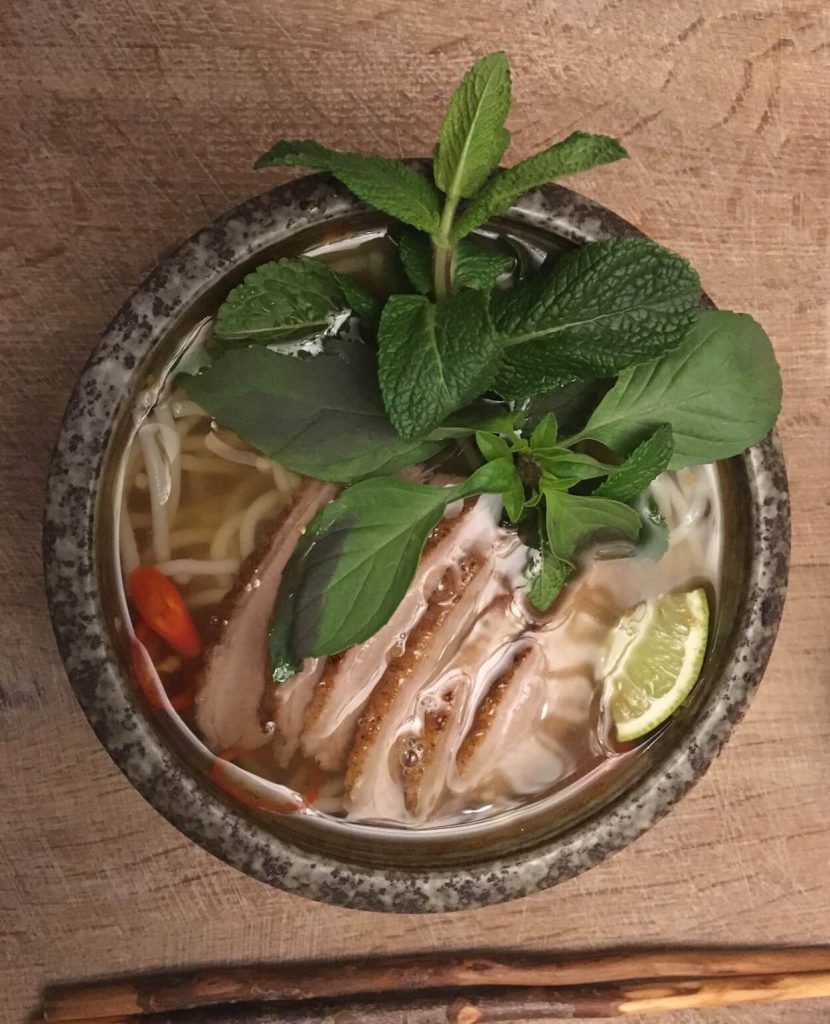 The dessert and final course was called Banh Can; coconut and sesame doughnuts with mung bean centre.

These chewy delights were almost savoury from the sesame. The combinations of textures showed the same level of thought as the presentation of all the courses throughout the meal.

There was also a bonus.

A sweetcorn dish, not quite as vibrant, but I was surprised to find it moreish. It was sweet, creamy, with subtle textures. It matched well alongside the doughnuts. 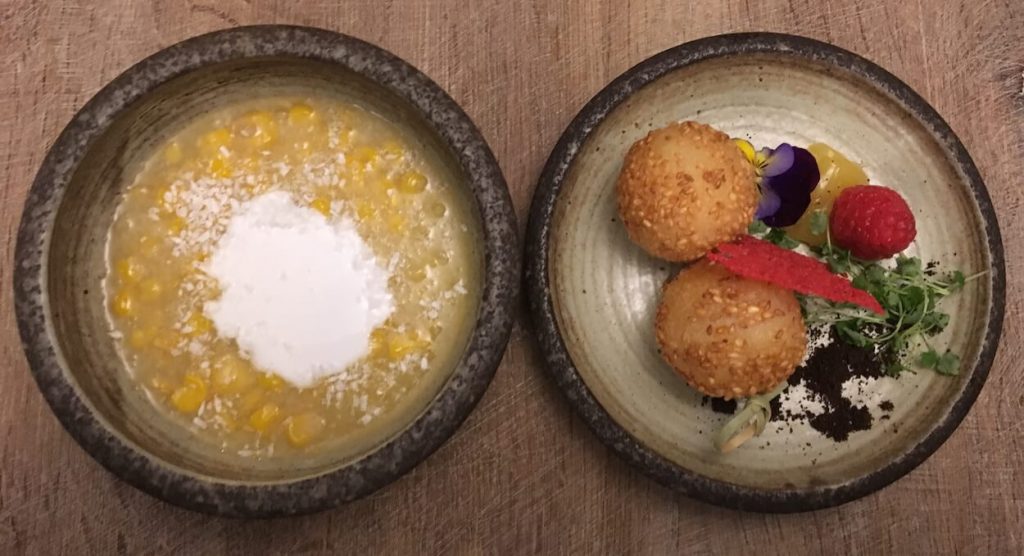 Like the restaurant itself, care and attention were paid to the presentation of each of the dishes, with vibrant colours and some of the thinnest precision-cut chopping I’ve seen.

This is a high standard of cookery. The flavours dance, there is sweetness, sourness and a background level of spice which is judged perfectly.