After moving to the area around 6 months ago, I’ve become a regular at Westerham Brewery – you can see my reviews of their Nova Anglia NEIPA, an open evening back in December, and their excellent taproom for evidence. So I was thrilled to attend the 15th Anniversary party for friends and family of Westerham Brewery, which took place over the late May bank holiday weekend.

The event was held in a large marquee alongside the brewery. This would go on to be used for a beer festival to further celebrate over the whole weekend, with live music, street food and of course beer from Westerham and friends.

As well as the excellent canapés on offer during the evening the beer list was impressive. Westerham’s friends supplied some top-notch beer to pour alongside Westerham’s current range, and there was lots of local gin too.

I’m well acquainted with most of Westerham’s beer but like many breweries there always seems to be something new available each time I visit. 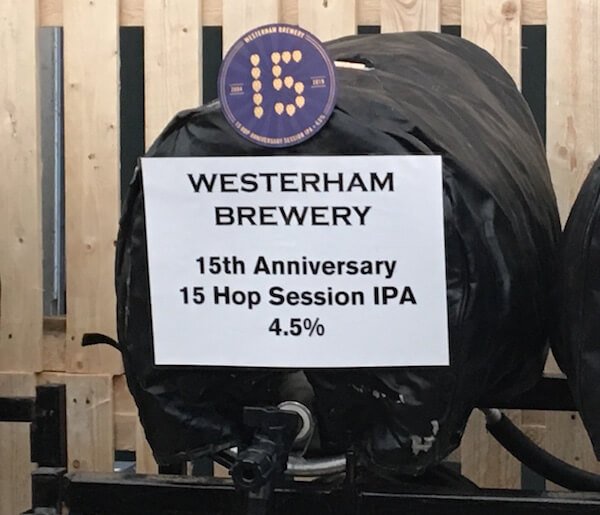 One of these was a beer brewed especially to commemorate their anniversary – a 15 hop session IPA which was being served on cask. This was an easy-drinking IPA using only English hops, with most of these hops grown at nearby at Scotney Castle.

Another new beer from Westerham was Dragons Shadow, a coffee stout that tasted fantastic. I can’t remember the last time I had a coffee stout this good. I speculated that the name had something to do with Daenerys Targaryen going postal in the last season of Game of Thrones. But it is in fact that there are ‘dragon’ coffee beans used in the brew.

The beer list was enviable, including many favourites of mine. As it was a Westerham event, I stuck with the brewery as I spied Audit Ale on cask, which I’ve only previously had in bottle. If anything, this complex, strong ale was even better than I remember it being. On my next trip to the taproom I will need to stock up on a few bottles of this.

See also  London Marathon - 26.2 Miles is a Long Way to Travel for a Free Pint 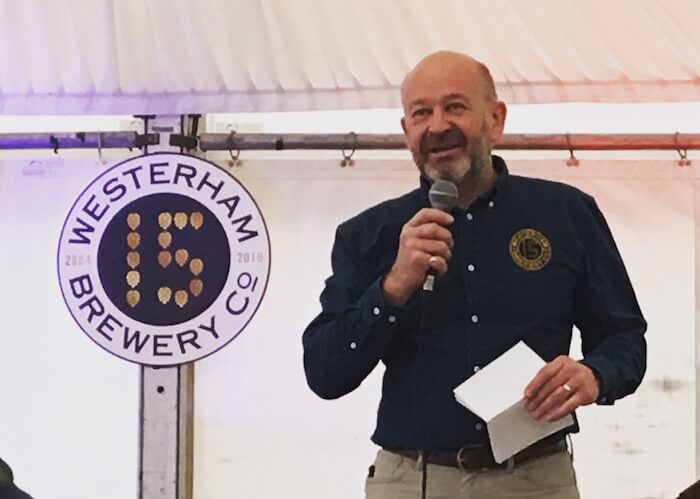 After picking up a pizza and some Joy Juice, brewery owner Robert Wicks took to the stage as the first music act finished. He spoke proudly about the development of the brewery over 15 years and thanked many long-standing members of staff who were in the room.

Having now poured over 12.4 million pints since 2004, they’ve seen the boom in new breweries opening and a greater interest in beer. They were the 9th brewery in Kent when they opened, and now there are over 50 operating in the county.

Wicks went on to explain details such as how the brewery doubled capacity in 2009, and then went on to produce many more different beers and began to push boundaries as they hit their stride.

This included working with German brewmaster Markus Lotz to perfect recipes such as Helles Belles, a gluten-free lager that is now the brewery’s bestseller.

This year, new beers have also been a success. Nova Anglia, a New England style IPA brewed in conjunction with ex-Fullers brewer John Keeling sold out of its first batch.

With more partnerships in the works with Fortnum & Mason, the National Trust and Marks & Spencer, it’s looking like their 15th year will not be a quiet one.