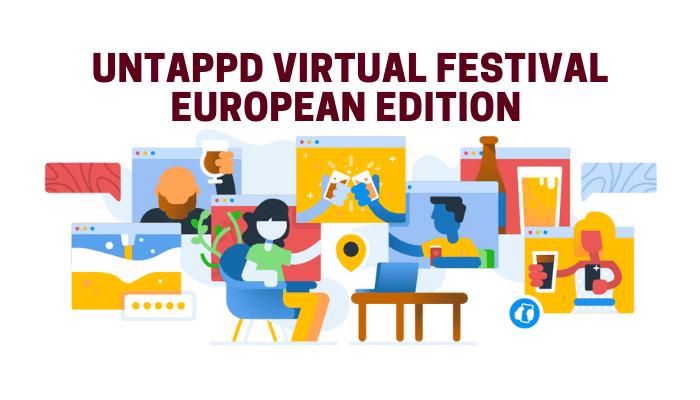 There have been many virtual tastings or festivals organised by retailers, CAMRA and breweries this year with the lack of in-person events due to COVID-19 restrictions.

I’d not had a chance to take part in any of these over the course of the year, but received a ticket to the European edition of the Untappd Virtual Festival for my birthday (Cheers Bro!).

The ticket gave access to Sunday’s session or ‘Sunday Funday’ on 29th November 2020 and a pack of 5 beers to enjoy as part of the event.

The box of 5 beers for the session was delivered by Beer Merchants prior to the event. The Saturday ‘Hop Hugger’ session consisted of hoppy IPAs, whereas the Sunday session contained five different styles, from Lager to a Baltic Porter. A stemless Untappd tasting glass was also included.

The festival included a live tasting at 7pm on both the Saturday and Sunday hosted by Untappd founder Greg Avola, who interviewed the breweries, passing on questions from festival goers. There was also other video content to watch such as music and additional information about each of the beers. 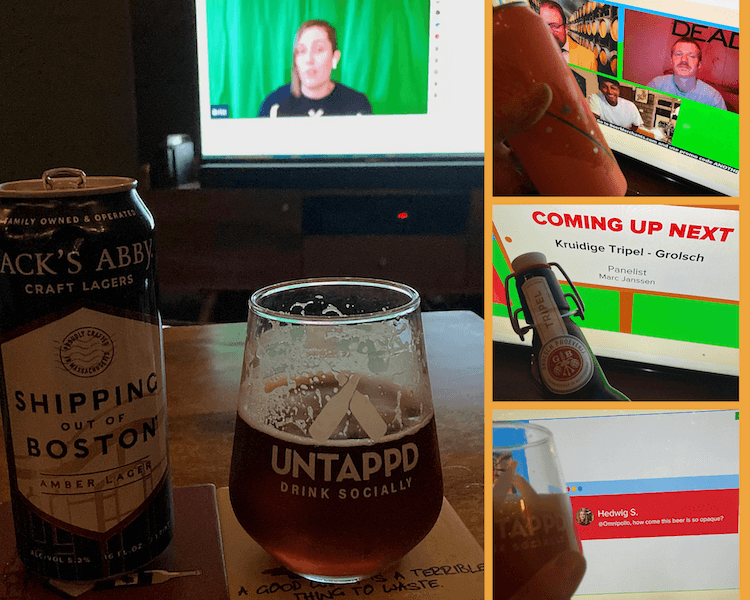 As well as the live chat during the live tasting, festival goers were interacting on Untappd itself, checking into the festival and using hashtags to share their setup, pour and randomly, their pets – #pintswithpets (Cheers Dog!).

Here are my thoughts on the beers I tasted. It goes without saying that I ‘checked them in’ via the Untappd beer app!

Here are the beers in order, starting with lighter, lower ABV styles, as you’d expect from a tasting. 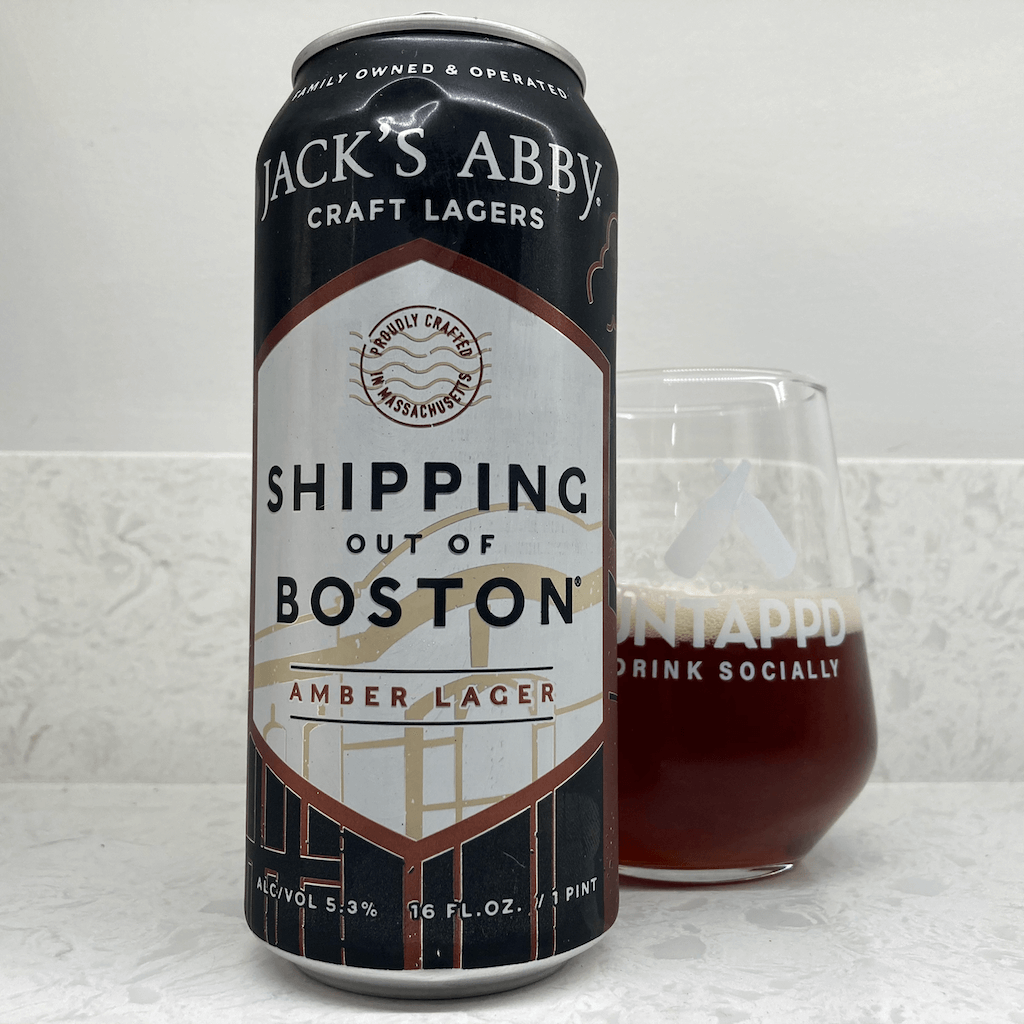 I thought the concept for the festival was a focus on European beers, but this Amber Lager hails from the good old US of A. Still, this beer is a style that reminds me of dark European lagers.

Jack’s Abby are lager specialists and take their glassware seriously, judging from their video where there was an impressive range of vessels being used for each beer.

This 5.3% lager is dark, toasty and has a clean finish. Made with local ingredients, this has a hefty malty character but still retains drinkability. Reminiscent of best bitter crossed with a German dark lager.

An excellent way to start the festival and it worked really well with my slow-cooked Morrocan-spiced Lamb shank (Cheers Wife!).

This can is a size you don’t see much in the UK – a US Pint! Smaller than the British Pint, a large can is fine at this strength, and it did not take too long to finish before moving onto the next beer. 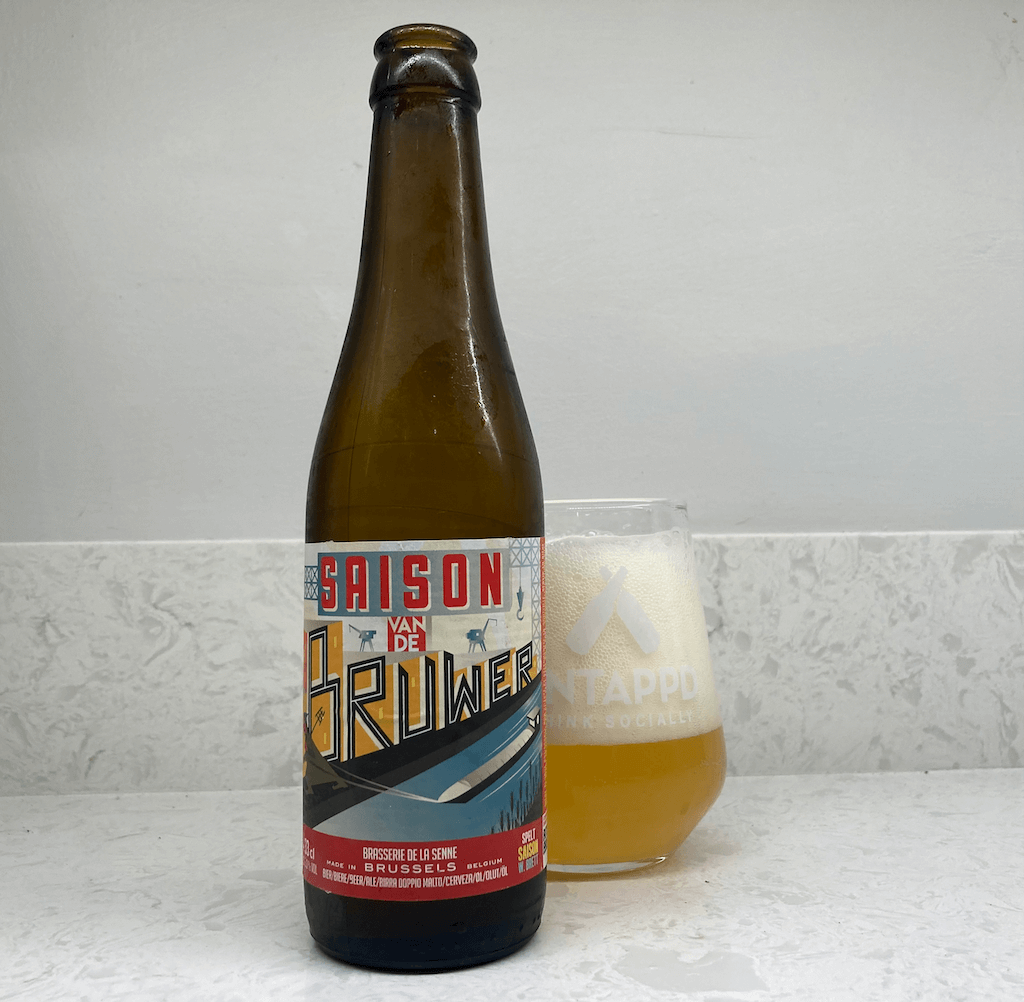 Next up was a Saison from Brussels-based Brasserie de la Senne. Based on a 1920s spelt Saison style that was traditionally brewed for brewers to drink in the brewery, this beer has a subtle funk from the addition of Brett yeast.

The beer is very aromatic and is something I’d prefer to drink in the summer on a scorching day.

I like Brasserie de la Senne’s ethos about producing beers for drinkability and in styles that are desired by their local customers, all using European hops. Their artwork and aesthetic by in-house illustrator Jean Goovaerts looks fresh, and evokes European posters from a bygone era. I am keen to try more of their beers in 2021 – but I do have their Christmas beer waiting. 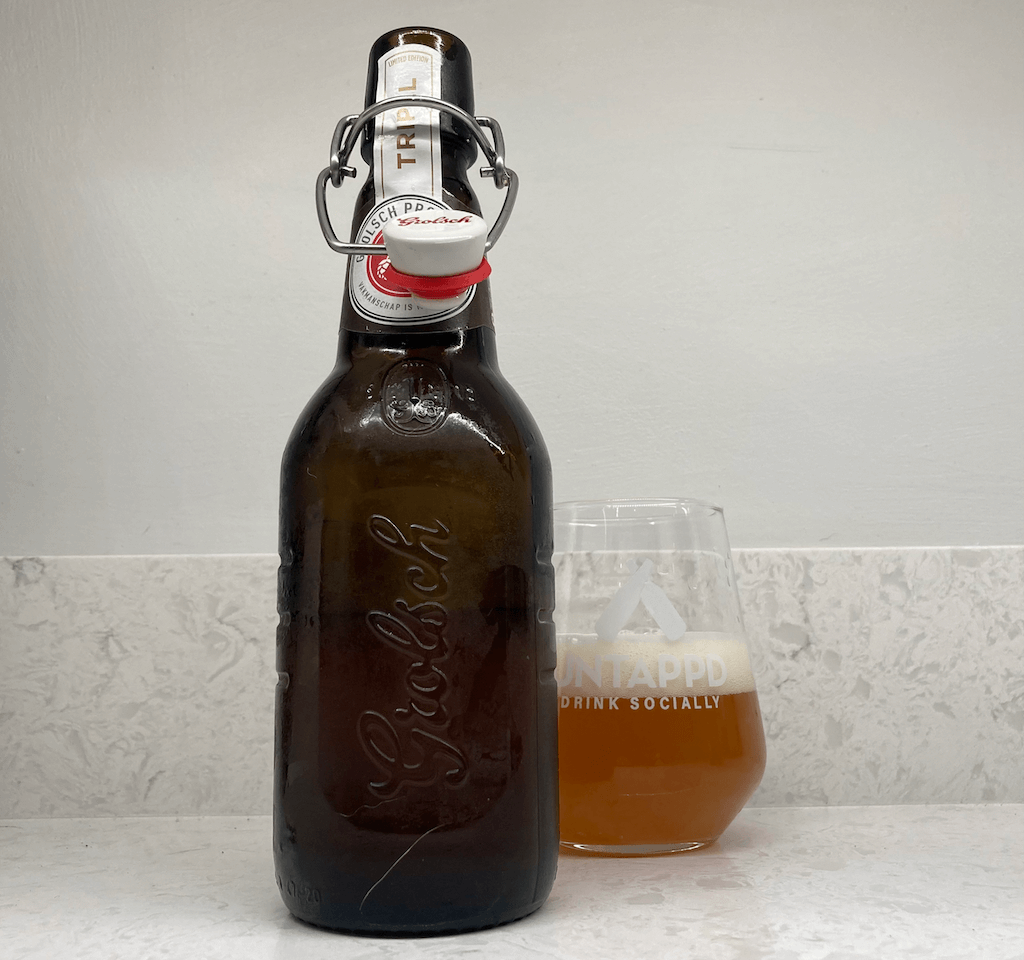 A surprise here with an addition of a beer from a large brewer. I did not realise Grolsch made beers like this and it was much better than I thought it would be.

Made on their smaller pilot test kits, and presented in a beautiful swing-top bottle, this 8.3% Belgian Tripel is far removed from your standard mass-produced lager. It is one of their best-selling special beers.

This strong, spiced Tripel has added herbs: lemongrass, coriander and cardamom give a very fragrant aroma.

The handy swing-top bottle is perfect for beer tasting at home – you can easily put the top back on and stick it back in the fridge for later or even the next day! 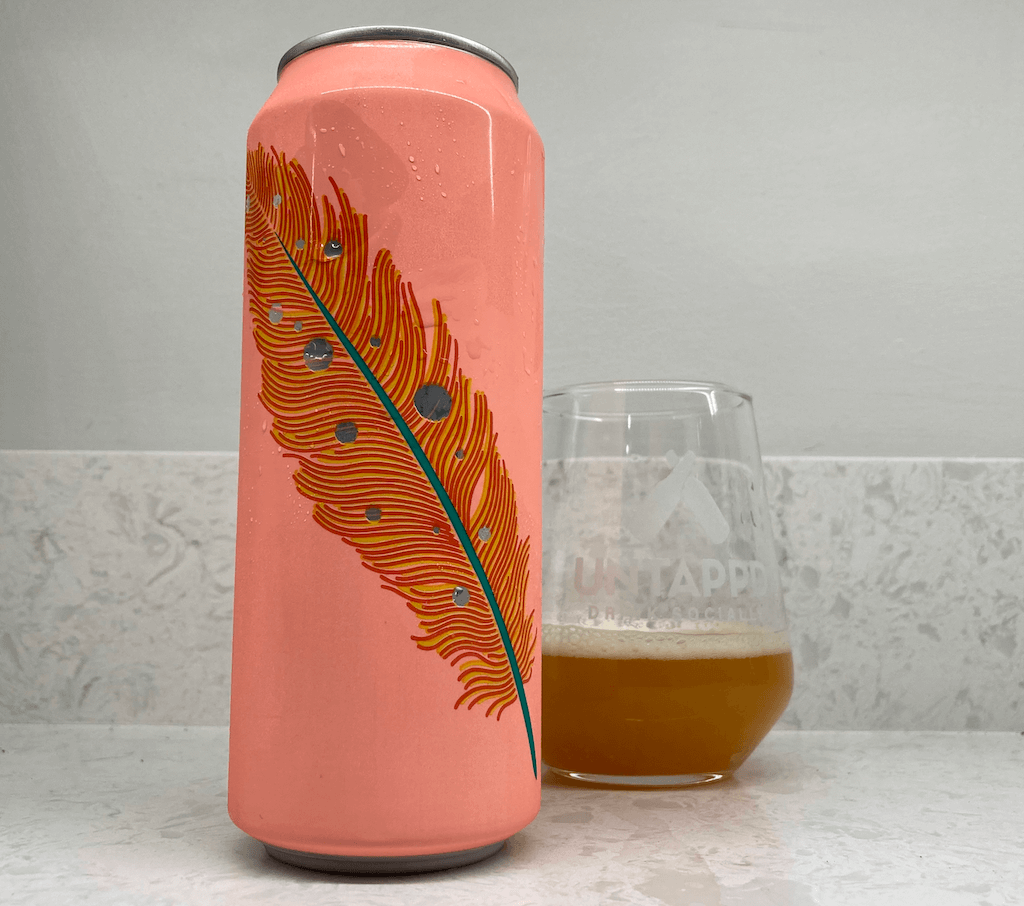 This beer has Omnipollo’s distinctive art style – a very eye-catching peach can with a large feather.

Bianca is a range of fruit-forward beers, and this one goes for it with full on amounts of Guava, Lychee and Passionfruit. It is very similar in thickness to a lassi, if not quite as fresh tasting.

I have not had all too many of Omnipollo’s beers before and this is certainly not a style I’d normally go for, with all that added fruit!

The beer was very thick, resembling a fruit juice smoothie. This intensely sticky concoction is certainly full of fruit flavours which are rather pleasant. Passionfruit, lychee and guava combine well. It does not seem to drink it’s 6%. I did not really pick up too much of the salt and it did not really seem like any gose I’ve had before. The fruit likely balances this, with any salt enhancing, rather than overpowering. I imagine this has a very short shelf life so ensure you buy and drink as fresh as possible, keeping refrigerated.

It would be a great breakfast beer but I’m not sure about it for any other time of day, especially in a 500ml can during a virtual beer tasting. One to share and wonder at, but not something you are going to drink all night – it would certainly make me ill pretty quickly! 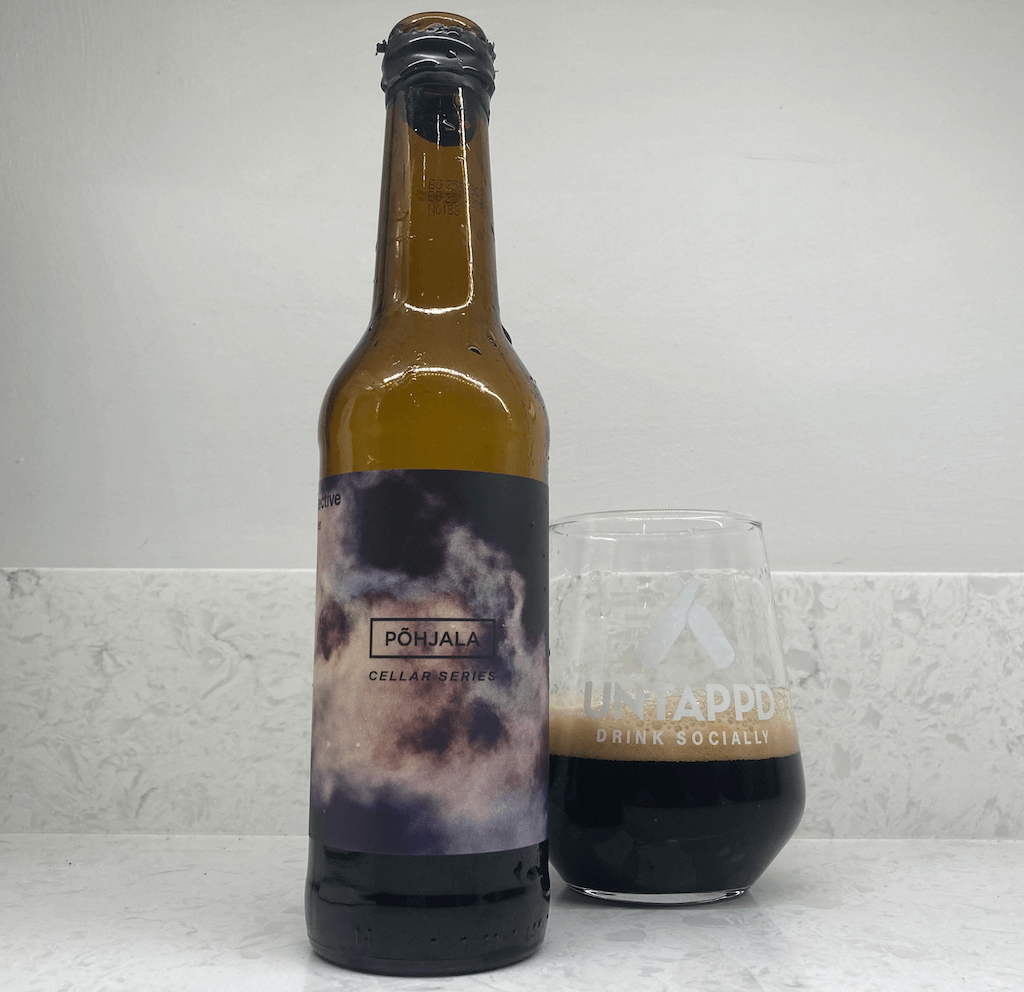 Based in Poland, Põhjala have built a reputation for their barrel-aged stouts and have been a common sight in UK bottle shops for some time now. In fact, I’ve even seen them in supermarkets this year.

Their cellar series usually has a wax top, which it was explained to attendees is not just about standing out on the shelf – it provides an additional layer of protection and they feel it improves the potential to store for longer periods.

Armchair Detective is a great name for a beer to drink at a virtual beer festival, and this Imperial Baltic Porter is smooth, with a gentle smokiness.

It is aged in a blend of XO Cognac barrels, which for me adds a subtle sweetness to this porter.

It’s very luxurious, but I think I prefer more of a stout backbone at this strength – more robust bitterness.

Still, this is a great dessert beer to sip with a bar of dark chocolate.

To summarise, it was a fun evening to while away a few hours and learn more about the breweries involved. There’s a lot of content to get stuck into, even if a virtual festival lacks the atmosphere of the real deal.

Would I take part in more online tastings? I probably would given the chance, but I do hope we can all visit beer festivals in person in 2021!