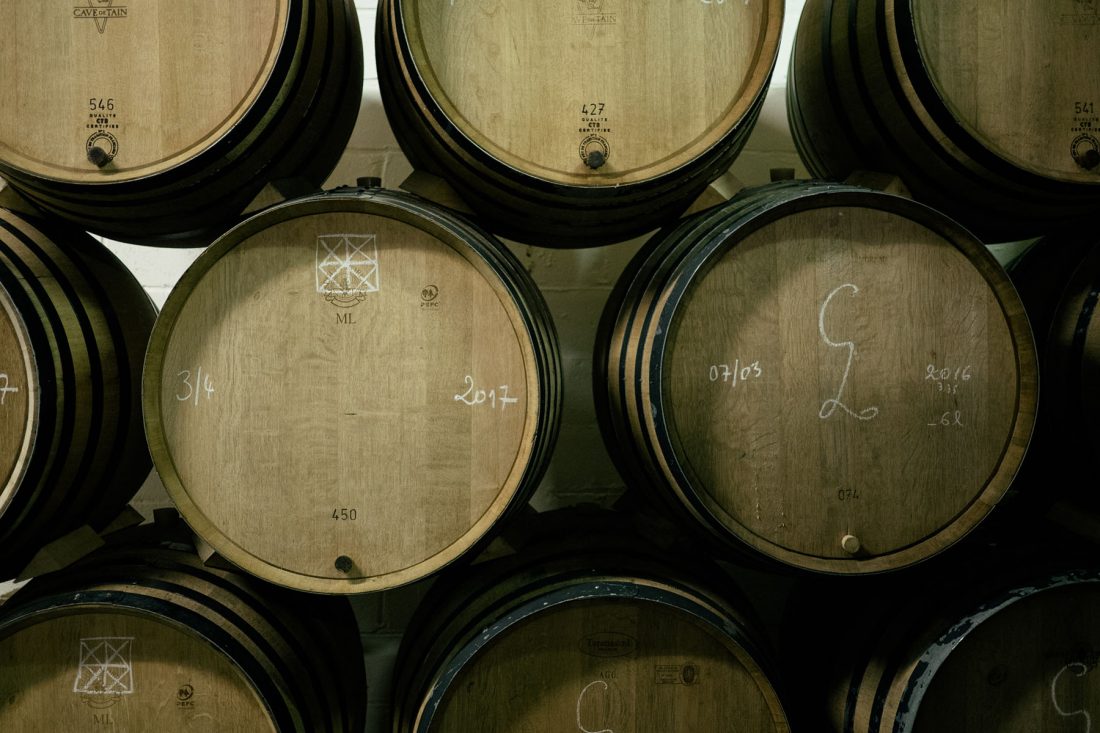 Bouncy castles, marching bands, and rows of frothing foudres were a few recurring themes on Tour de Geuze, a bi-annual event that has run in the region of Pajottenland, Belgium for the past 20 years.

For two days, the breweries in this area open up to the public to share lambic, gueuze and other sour concoctions with the public.

At its heart, it is a traditional event that caters to the locals as much as the hordes of international sour enthusiasts that find themselves there. HORAL, the promoters and protectors of lambic beer, organise the event, putting on buses that tour varying combinations of gueuzeries in the area. 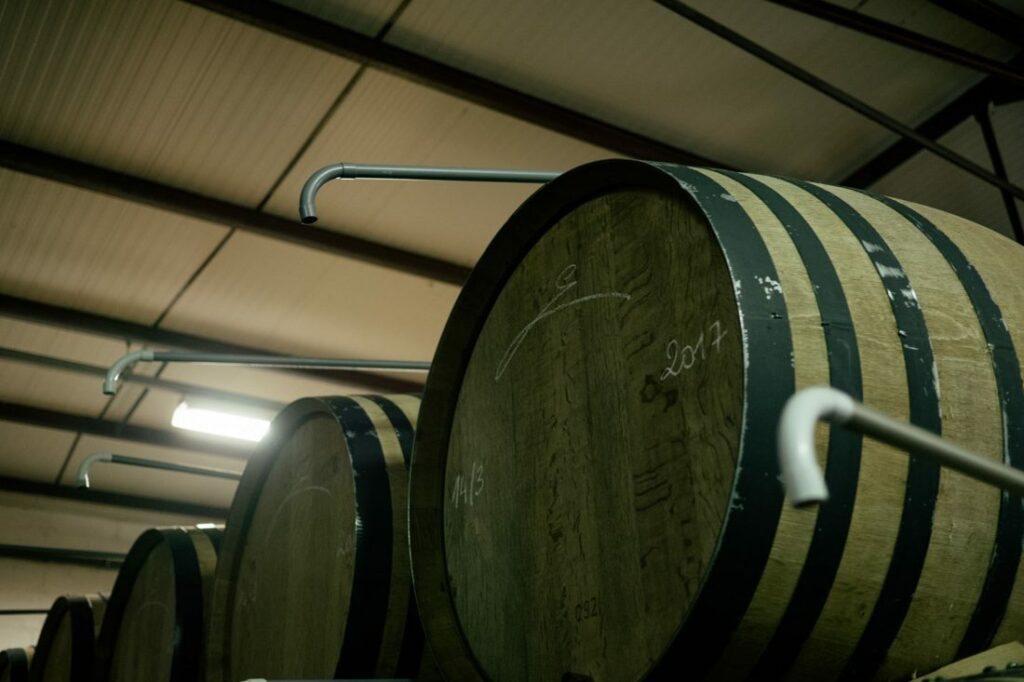 Our bus’s first stop was Gueuzerie Tilquin, one of the newest blenders that sits just outside Pajottenland.

Uniquely, Tilquin has no brewing facility to speak of, instead getting freshly-brewed spontaneous beer from the other breweries in the area and ageing it for years before blending to make their gueuze. This might be uncommon in Belgium but is less so in the US, where some sour breweries focus purely on blending, seeing the initial brewing as a function but what happens in the years to come as the artistry.

Each different wort is put into barrels that host their own natural ecosystem of yeasts and bacteria. No vial from a yeast bank has been added to these, just spontaneous wort and bacteria that has made the wood their home. 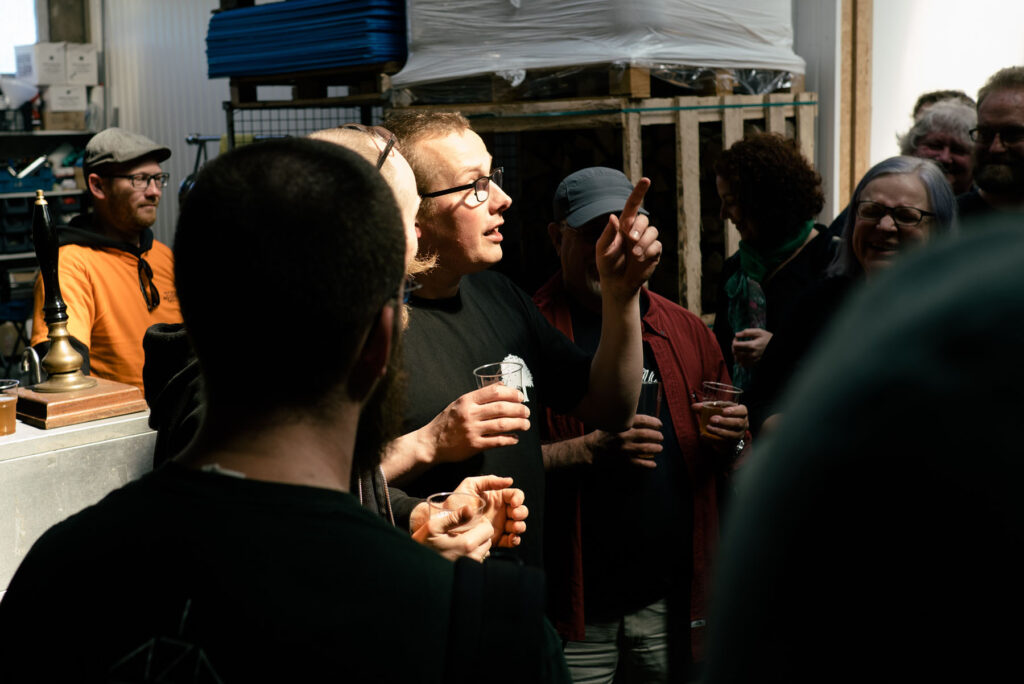 Tilquin was the only one out of the guezeries we went to that had a guided tour, and was all the better for it. We tried an uncarbonated gueuze that was ready to be bottled, while members of the public joked with Pierre Tilquin about off flavours (someone said they smelled sulphur; he begged to differ).

Of the four gueuzeries we saw one thing was made clear: that not all lambic and gueuze is made in dank basements or creaking farmhouses, which breweries such as Cantillon might have you assume. Tilquin’s space was meticulously clean, something (we were told) Pierre himself wants of his blending facility. The sterile environment doesn’t however reflect in his beer, which is refined and complex in an almost accessible way. Our bus tour guide (and official member of the Lambikstoempers) even mentioned he normally eases in newbies to gueuze with Tilquin because of its balance. 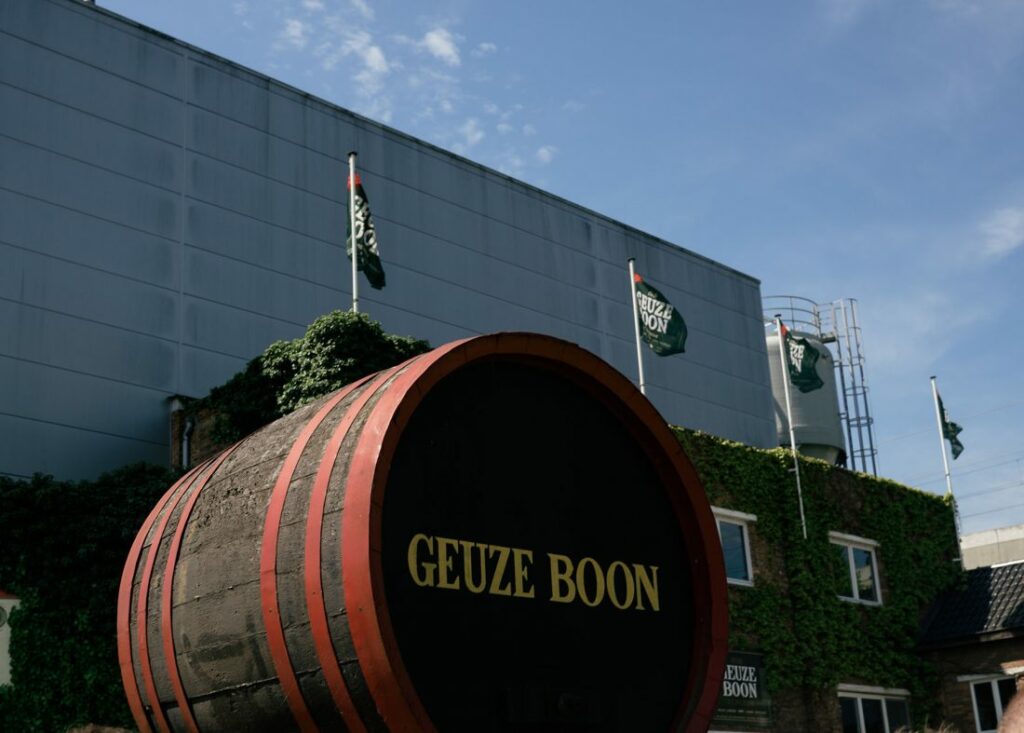 From Tilquin we went on to Boon, a dramatic change in size and style. Its brewhouse and large steel fermenters towered over the landscape and felt closer to British breweries such as Fullers than the previous stop at Tilquin. That is until you go past all the steel and get into the darkened halls of foudres that lie at the end of the tour. Boon employees poured lambic straight from foudre 109, handing out samples to those who were slowly wandering around the halls. When it comes to atmosphere, sipping lambic straight from the source, in the dark, surrounded by monolithic foudres, is exactly what I had hoped for. 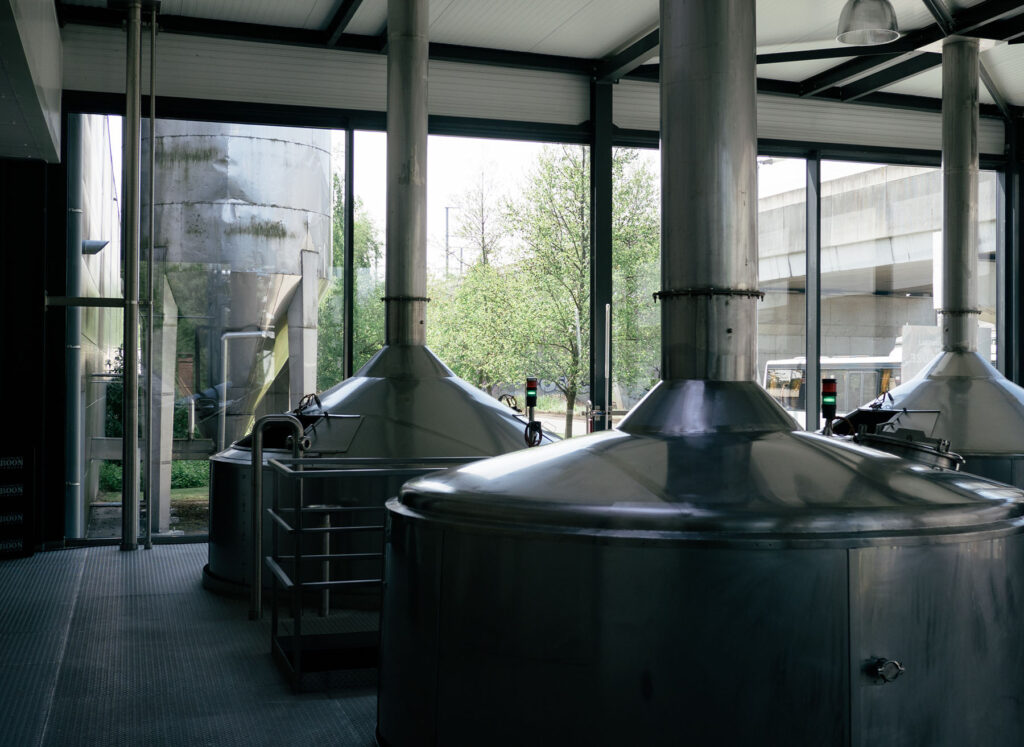 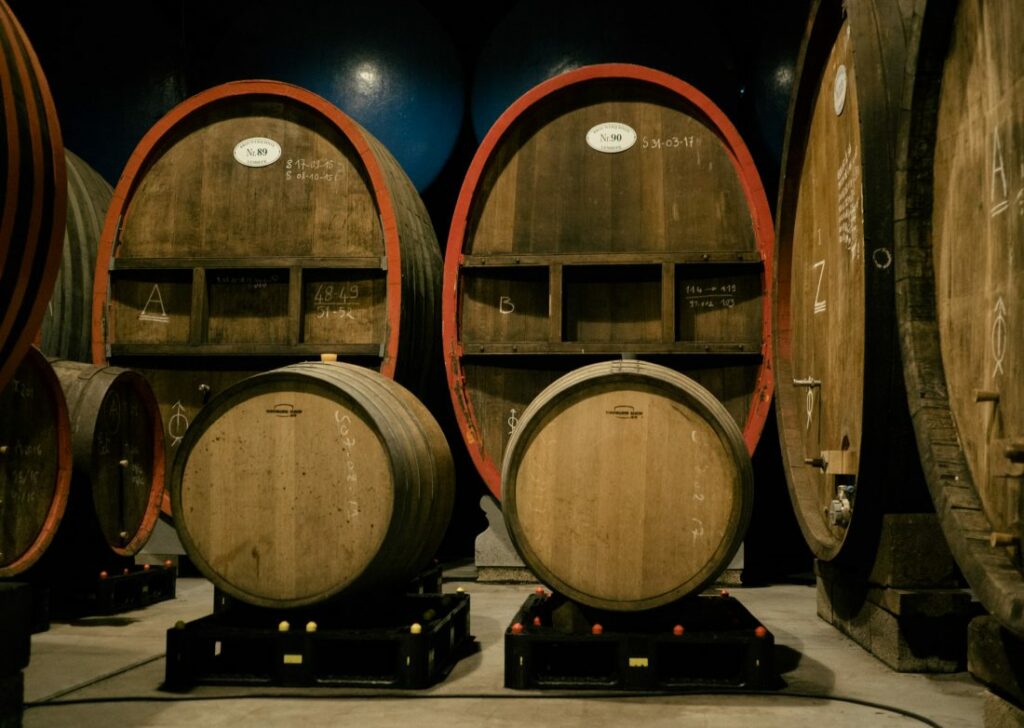 Boon had set up a main bar serving their more commercial, sweetened Kriek and Faro but this was practically empty compared to their ‘Connoisseurs Bar’, serving their more rare offerings such as lambic and gueuze ‘monoblends’ from one particular foudre and a 5-year-old lambic straight from a wooden cask on the bar. The latter was a tannic, bitter, fascinating and not totally pleasant brew. We tried blending a little with Boon’s Black Label which instantly gave it a bit more carbonated vigour. 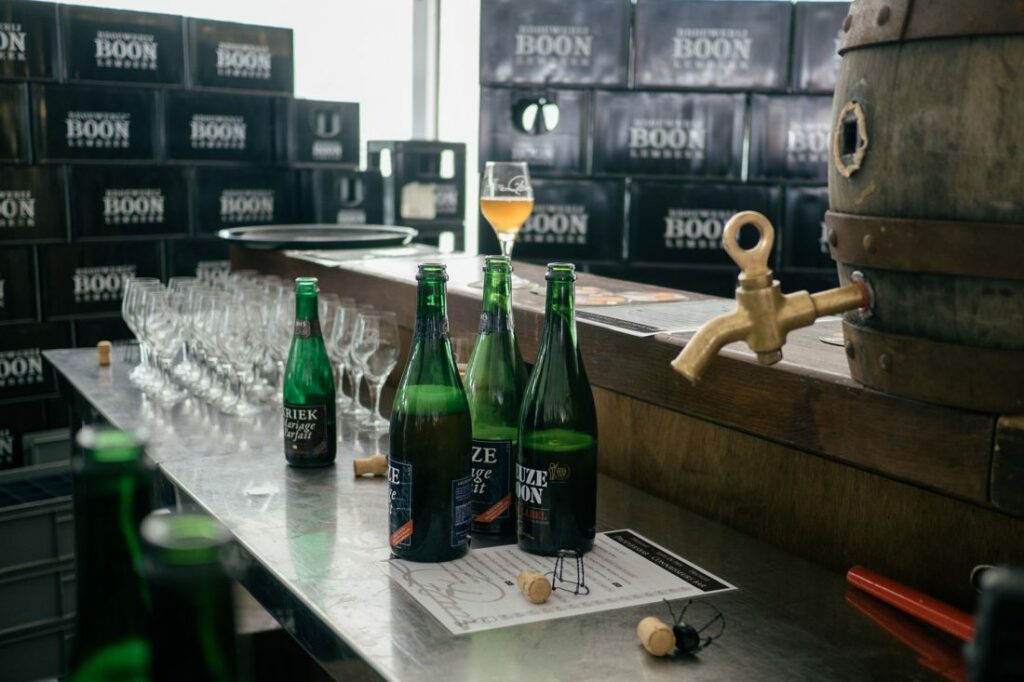 In recent years, Boon’s collaborations with Mikkeller and their release of Black Label have seen a flourish of interest from the beer-geek crowd and really reminded me how world-class their beers are. Their standard Oude Gueuze and Mariage Parfait are still some of the best value gueuze around, and their wide distribution really helps to expand the amount of people who can try this unique beer style. 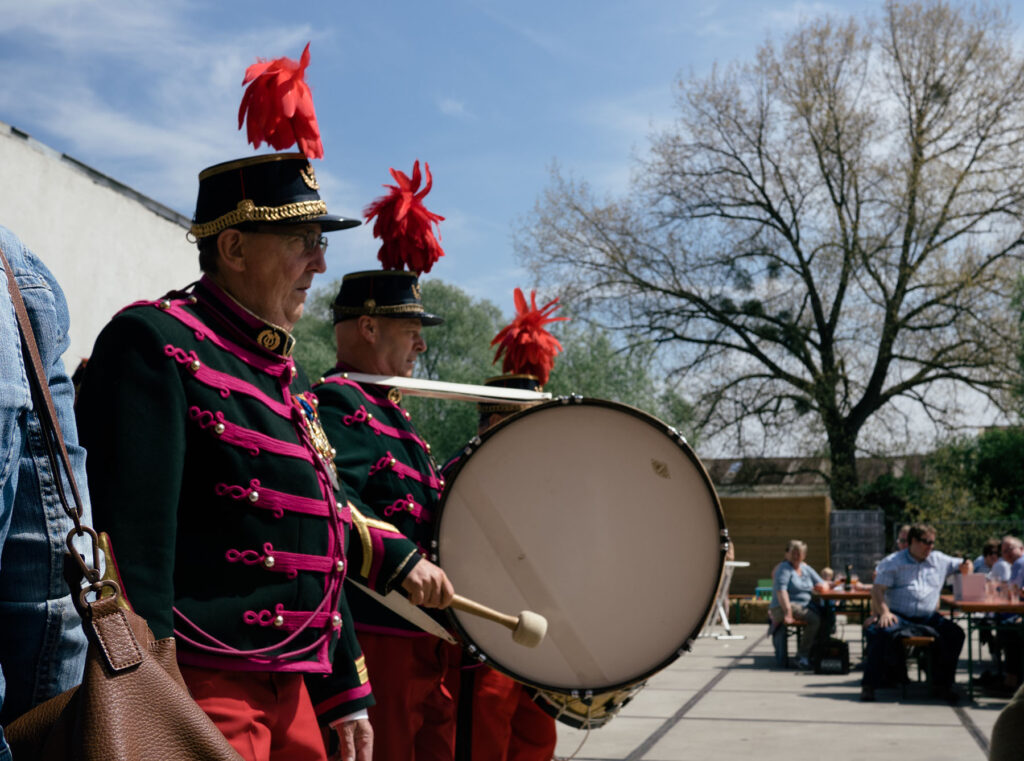 Next up was Drie Fonteinen, the one I was most excited about, and from a perspective of the range of beers on offer, it delivered. Nocturne, a dark malt gueuze was as confusing as it was delicious, balancing a sweetness and sourness that was quite unusual but extremely moreish. There were also bottles of their Golden Blend (a gueuze including some 4-year-old lambic), Armand & Gaston and Hommage, a blend of raspberry and cherries that had an almost Victoria sponge like character. Sadly our stop at Drie Fonteinen was just under an hour so we were quickly whisked off to our final brewery. 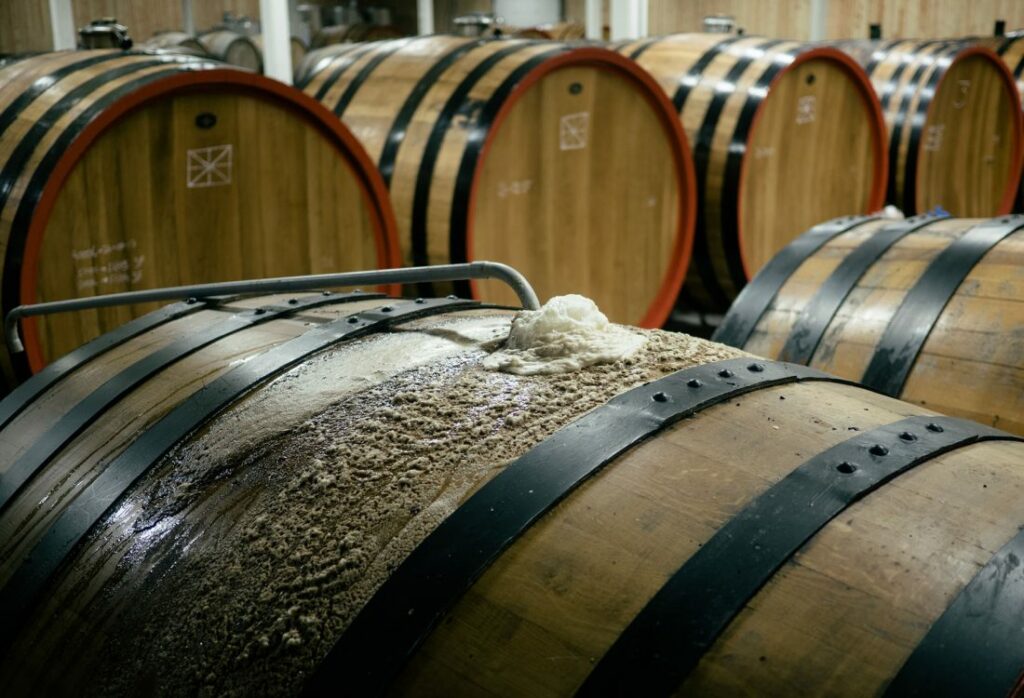 I was not holding much hope for the tour of Lindemans, a brewery famed for its artificially sweetened fruit lambics that has warped the ideas of what lambic and gueuze beers are for 99% of people. I was right and wrong in equal measures. Their tour was the only one that actually had a beer being brewed as we walked round, letting us witness a newly emptied coolship filling the air with a malty, sweaty funk. 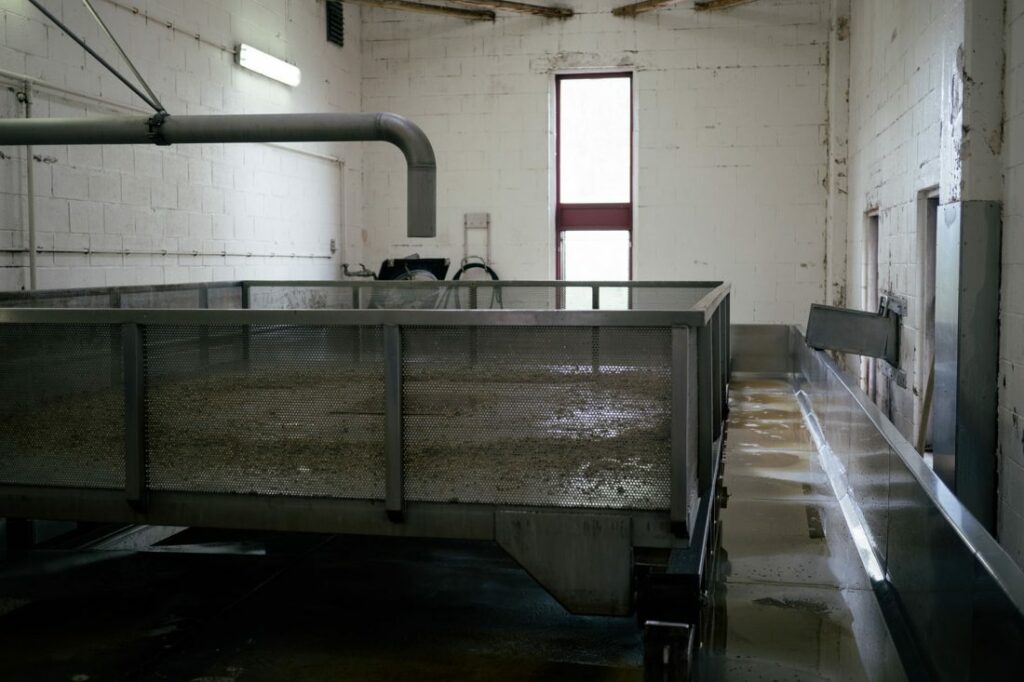 Things got worse as we walked through the foudre room, which was filled with theatrical smoke, red lighting and steampunk-dressed staff. It was surreal in the worst of ways. But as we quickly got the hell through, we saw they had set up a ‘blend your own gueuze’ station, in which you could choose between barrels and bottle your own unique blend. 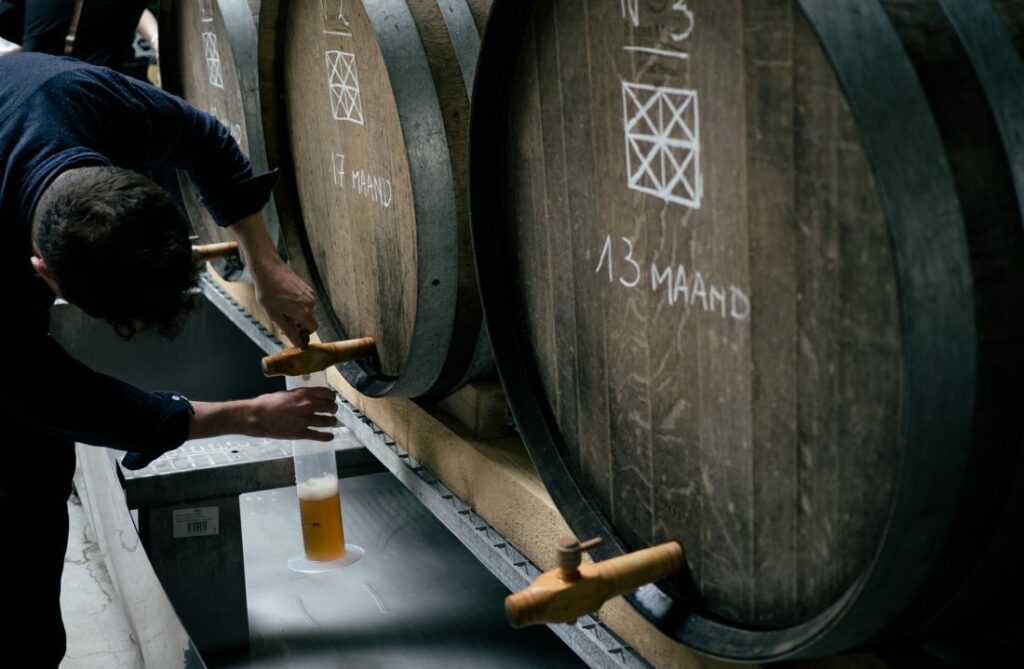 That alone saved the stop, giving a little glimpse into what it’s like to work with different barrels and variances. They still obviously struggle balancing their core beers with the interest in more traditional styles, but have started to release a lot more interesting beer again, after collaborating with Mikkeller on the divisive SpontanBasil.

We only did the tour for one day, but other revellers went on to visit more breweries over the Sunday, with stops such as Oude Beersel, De Cam, Hanssens, De Troch and Mort Subite to enjoy. As a coveted product back home, and one I have loved for years now, it was good to see the different sides to lambic and gueuze: its strong rooting as a local, accessible beer but also its acceptance as something quite special by beer drinkers all over the world.