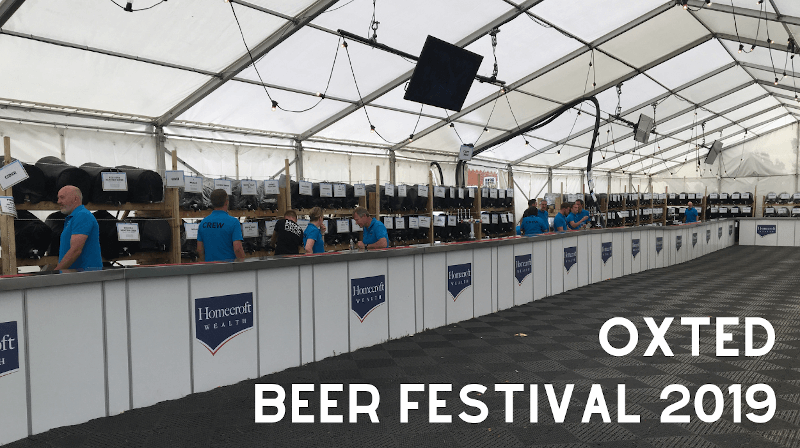 I’d heard about the Oxted Beer Festival before moving to Oxted in 2018, so had blocked the weekend out in my diary for some time.

I’d not really volunteered at a festival before, although like many, I worked behind a bar when I was younger. Wanting to get involved in the community and see the festival from behind the scenes, I put my name (and that of my long-suffering wife) down to volunteer.

The shifts I had were Friday evening and Saturday afternoon. The festival is held at Master Park, my main dog-walking location, but I was surprised to see the site for the festival was small, perhaps a quarter of the park. This meant it felt really busy and the atmosphere ramped up quickly both in the evening, and the afternoon the next day.

There are a number of different bars serving cocktails, rum, craft beer, Pimm’s and the obligatory street food stalls from around the world (I tried some FANTASTIC fried chicken, and a few donuts that somehow taste so much better warm from the fryer and outdoors). 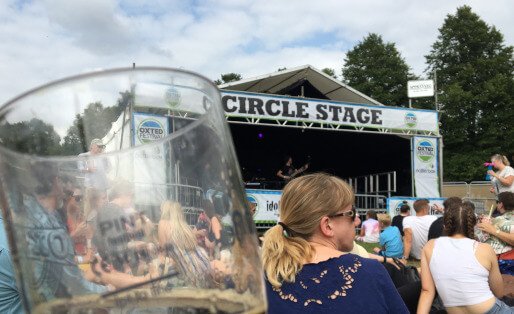 There are a few different seating areas, including one for VIPs (who wear black wristbands that mean they drink as much as they like), and two stages.

The main stage is an impressive set up, and inside the main tent next to the main beer bar, which worked particularly well in the evening. As it is enclosed in a large marquee you can get a real party atmosphere, and it’s likely fine if it pours down too.

Luckily, the weather behaved all weekend, even treating attendees to some stunning sunsets.

We were volunteering on the main bar. Our induction was short and to the point – pour the beers, don’t serve anyone underage, have fun.

The festival has its own currency, Stillings, where the exchange rate is a simple £1 to 1 Stilling.

Real ales were 4 Stillings each, while Lagers were 5. It felt expensive for punters, particularly on top of the entry fee, but as the event exists to raise money for local charities, no one was really complaining.

My advice? Drink halves of real ale and try lots of different ones. Just don’t forget your glass!

Hop Stop had their own specialist bar too.

The team at Hop Stop had curated a great selection of 100+ beers, plus 4 lagers and quite a few ciders (including a Biddenden cider at 8%, the drink of choice for those looking for the most alcohol on the least money). Apparently some of the team had tasted all of beers on the Thursday evening to rate them, which was perhaps a reason why some seemed to be sporting sore heads on the Friday.

I tasted a few of my favourites, some new beers I’d heard about and also ones I’d never had on cask.

One of my concerns was heat, as this has spoiled a few cask beer festival experiences for me in the past. Yes, that’s right, real ale should not be served at room temperature.

My concerns were unfounded – the tent remained cool and the beer was kept in good condition and served correctly! I guess we have hop-stop team to thank for that.

As it can usually  be hard to find any dark beers on cask apart from dedicated beer bars, I enjoyed drinking Common Grounds from Magic Rock and Railway Porter from Five Points. There as also Broken Dream from Siren, awarded the Champion Beer of Britain at the 2018 Great British Beer Festival,. it was gone at GBBF 2018 by the time I arrived, so I enjoyed this one.

Most punters are not quite as adventurous as me though, and seek what they know.

Dark Star’s Hophead was ever popular, as was Zamzama from Gun Brewery as was the West Coast IPA from Holler.

I gladly introduced several drinkers to Burning Sky, as the excellent Aurora and Plateau were available.

Some just wanted London Pride, but thankfully the bar ran dry pretty quickly and people had to choose something they didn’t know!

By far the most popular beer I was pouring was Helles Belles from Westerham, which was constantly running kegs empty. Not even a new session-strength Czech lager from Budvar (Pardal) could match it. 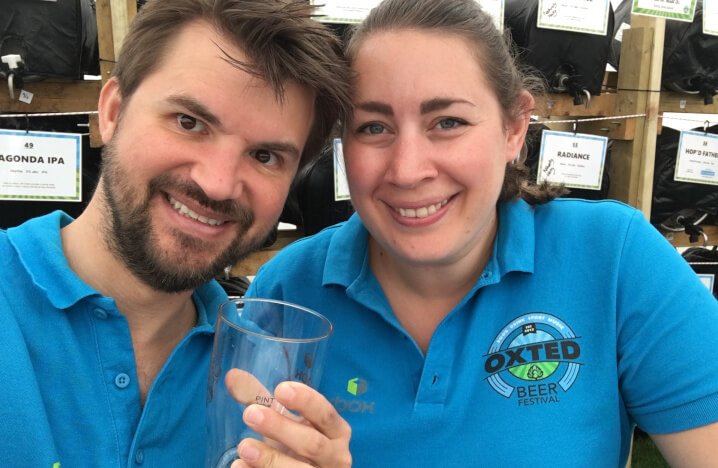 I really enjoyed volunteering – there were enough volunteers behind the bar that it never felt too stressful, but not so many that there wasn’t enough to do. The crowd were really friendly, with a good mix of locals, visitors, families, groups, beer aficionados and those who had no idea and wanted a recommendation. If they’ll have me, I could be back in 2020!