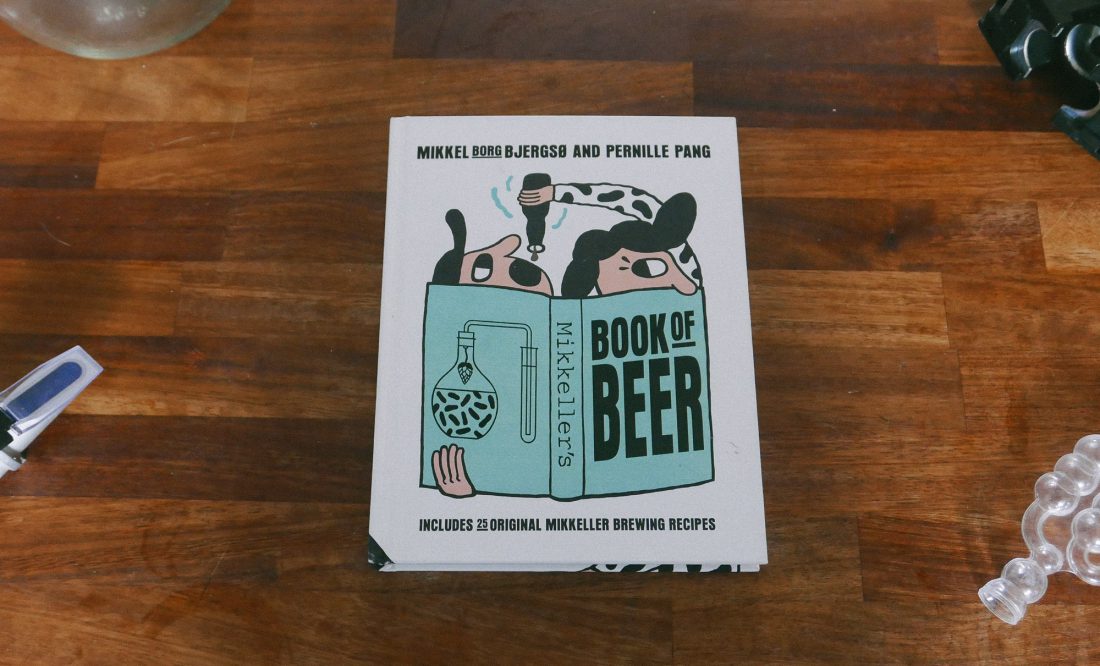 Mikkel Borg Bjergsø – a name that will make a lot of beer fans perk up and some of them wet themselves a bit with excitement.

As the main man behind Mikkeller he’s built an empire, featuring several bars all over the world, a fantastically successful beer festival and an impressive catalogue of the most glorious beers.

While working on a range of exciting projects that will see his hordes of fans howling with joy he’s even found time to write a book, although he did have some help from his journalist wife Pernille Pang.

Mikkeller’s Book Of Beer tells the story of how he started out and features recipes of some of his most famous beers, as well as recipes from the likes of Firestone Walker and Kernel. We went to the launch party at BrewDog Camden to submerge our faces in his brews and learn a bit more about the book. 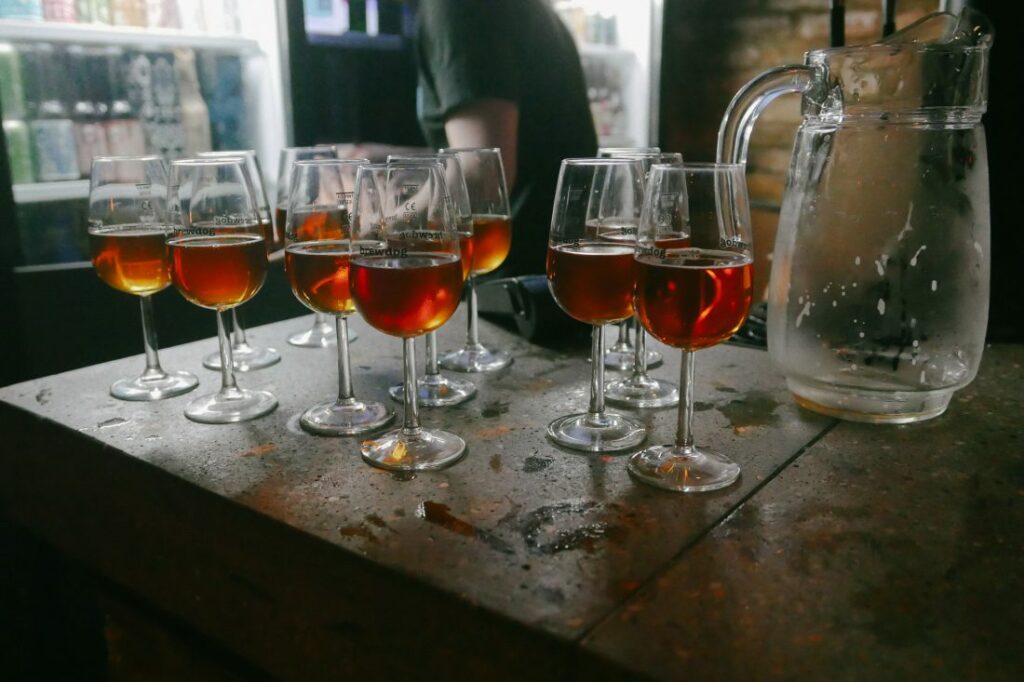 BrewDog Camden was filled with all sorts of riff raff thirsty to belt down a few Mikkeller brews. The man of the hour was already surrounded by a few awkward looking fans eager to get their books autographed and their faces selfied.

Mikkel was indulging them with a smile and a newly acquired classic brewer’s beard, which he later told us was an attempt to out-beard the hairy guys at Arizona Wilderness. So far he’s losing.

The beer being poured that evening was pretty damn outstanding.

There were several of his Spontan Series, a range of fruity lambics aged in oak barrels – available with things like rose hips, elderflowers and raspberries. Different versions of his Beer Geek Brunch Weasel was also on tap. This massive imperial stout made with the infamous civet coffee was available aged in several different barrels.

The highlight however, at least in my uncouth opinion, was his Nelson Sauvignon. This delicious bastard is up there with some of my all time favourite beers. It’s classified as a Belgian Wild Ale, brewed with brettanomyces and aged in Chardonnay barrels with Riesling grapes chucked in. It tastes like “That’s How It’s Fucking Done”. I’m likely to baptise my newborn daughter in this.

Assembled in the basement of the pub was a rough collection of bloggers, press and publishing humans. Jacqui Small, the publisher, didn’t have to do much as the book was already written and published in Danish.

The evening’s tasting consisted of a BrewDog employee standing on a chair introducing the beer and then handing over to Mikkel to say a few things. Mikkel is no inspirational speaker. I guess his ethos is to let the beer do the talking.

When we caught up with him he was more eager to talk about his new Copenhagen brew pub Warpigs, which he’s opening in collaboration with Indiana brewery 3 Floyds. After all, it’s probably the most exciting thing to happen in European brewing since the invention of IPA. After a good hour of indulging the growing line of passionate fans to personalised autographs, he took his jacket and disappeared into the night.

But enough about the event, let’s talk about the book. 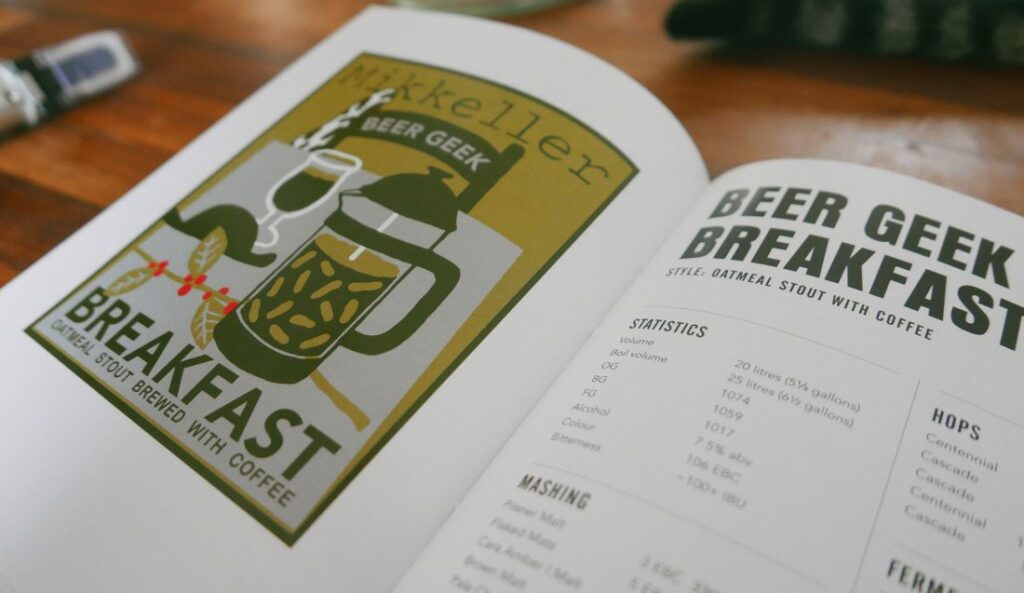 The book is very much a gateway book, meaning that it’s not a manual for die-hard homebrewing sparge fanatics who’ve been brewing for several years and are looking for ways to make their beers 1% better.

Also, if you’re looking to copy him and rise to fame by replicating his recipes then this is not the book for you either.

“This book is for everyone who like to follow what I’ve done – to start homebrewing and make it their hobby. When I did my first batch in the summer of 2003 I had no idea where it would lead, but I immediately loved the process and from there I never stopped. I think it’s a hobby like no other as you get a product that everybody understands and have a connection to. And you can, with very little equipment and knowledge, brew very very good beers.” Mikkel later told us via the medium of email.

The book tells the story of how he got going, the decisions he took and how he started out from humble beginnings. It tells the story of someone who got hooked on beer and quickly became incredibly dedicated, shamelessly emailing some of the best brewers on the planet to ask them about different techniques.

It also has a section about beer and food, with focus on some of the chefs he’s worked with over the years. It shows how great beer can be paired with world class cooking. Just don’t expect recipes that are easily replicated by the average home cook.

Mikkel has no qualms about revealing the recipes for some of his most popular beers in the book. “Every system is different, so all brews from the same recipe will be a little different. The recipes are meant as an inspiration. People should brew it and then move on.”

This is also probably why the recipes in the book aren’t extremely detailed, and why some people might feel lost sometimes if they’re not super confident about what they’re doing. Specifically it would be good with a bit more advice about how to create some of them on a homebrew scale, especially if you’re just starting out. The good thing however is that it makes for a more accessible read, serving more, as he says, as inspiration and a starting point than a manual for how to copy him.

The only part that is missing from the book is how he grew the Mikkeller empire into what it is today. How the hell did this man, with no brewery of his own, manage to open bars across the globe, run a festival and travel all over the world to brew with some of the finest brewers out there?

When we ask him if he would ever write this story he tells us “maybe some day, if people find it interesting. For me it’s more interesting to tell a story that everyone can relate to. Everyone can start brewing at home in their kitchen and some day travel the world with what they do. Its a matter of hard work, being smart and listening to good advice.”

There are better books out there about the history of beer and homebrewing.

A few bloggers have taken offence to the book and its haphazard use of brewing terms and the smattering of typos, but if you can see past this you’ll find a book that tells you a lot about Mikkel Borg Bjergsjø, and his take on beer.

Mikkeller is a brand that gets people into beer, and this book will make homebrewing look a lot like a viable hobby for the next generation of beer fans. We asked him if he had left anything out and he told us “I don’t have that many secrets, so probably all of them are in there”.