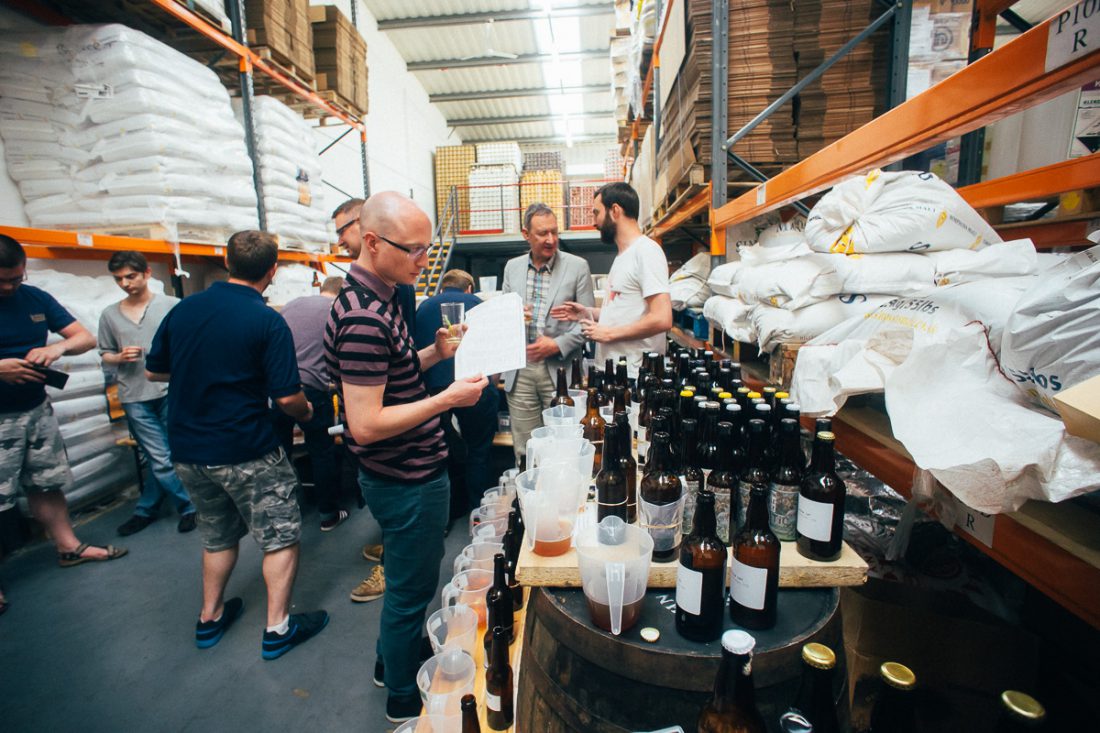 Homebrewing is a hobby that I both love and hate. The process can be frustrating and stressful, especially when the end result is just not that good. But when you produce a beer that stands up and makes other people happy too, then it can get addictive. It’s no surprise that many of the best brewers caught the bug at home, from Evin o’Riordain at Kernel to the boys at Weird Beard, they all had connections to the London homebrewing scene before going on to bigger things.

Homebrewing competitions are also an excellent way to get people motivated, and hearing that the ‘London and South East Homebrewing Competition’ was to be held at the brand spanking new Beavertown Brewery was a motivation enough to get my ass in gear and get the fermenters bubbling. I came up with two beers I wanted to make. The first ended up on the wrong side of dull, but the second, a Black IPA had a great balance and a hop kick to boot. So I traipsed up to Tottenham Hale to enter the competition.

As we entered the venue, we were greeted with the organised chaos of hundreds of bottles scattered on numerous tables from all the entrants. All the beers were there for the public and other entrants to try and taste, so we got stuck in, angling straight for the table holding the IPAs to see what hoppy brews we could find. It was a hot day, and most of the beers had moved past room temperature into the realms of warm, which made sampling them not as pleasant an experience as it could have been. I was quickly told lots of the popular beers had already been drunk, but there were still lots to sample from though. Lesson learnt, turn up earlier next time, especially if it’s summer.

After trying a few cracking beers and some that were suffering a bit under the heat, we had a look around the impressive new Beavertown towers. Having been to their last brewery in Hackney Wick, it was incredible to see how big, bright, and shiny the new digs are. This is a brewery that has stepped up to a whole new level, and it’s hugely exciting. Their new kit is eight times the size of their original brewpub kit, and the fermenters are even bigger. Freddie, the friendly Beavertown sales viking, was behind their newly installed bar, pulling cold pints of the good stuff. He instantly passed us a Neck Oil, their newly updated session IPA, and also slid over a few of their brand new and hugely hyped cans. They are still tweaking the recipes and brewing process to make the beers perfect for the cans, but things are starting to come together very well.

If it wasn’t blazingly obvious, Beavertown are taking their new foray into cans extremely seriously. They’ve even got an x-ray machine to check how tight their seals on the cans are, making sure the consumer gets their hopped up beers super fresh. Their designer was also showing us cheeky sneak peeks at the artwork for a new DIPA that has been on the cards for some time, and mentioned another IPA about to come along in the near future.

Resisting the pull of the Beavertown bar, we headed back to the competition to sample some more of the homebrews on offer, including beers from our friends including Andy Parker, Andrew Drinkwater and Crema Brewery, who all produced some excellent beers for the occasion. Crema Brewery’s Declassified NZ Black IPA was definitely a highlight for me, even at not peak temperature it was a beautifully balanced affair.

We then huddled around to hear the awards announcements. There were brew days, homebrew vouchers and mixed cases to be won, with many of the London breweries who had connection to London Amateur Brewers giving a little something to the proceedings. I was surprised and hyped to win my beloved IPA category, and even more surprised to win the Best in Show award. It was also great to see Andrew Drinkwater win an impressive five prizes and Andy Parker pick up an award for his IPA too.

We celebrated back at the bar with freshly poured pints of newly brewed Gamma Ray, a beer that has instant classic status in my books and was tasting fantastic. The ‘best in show’ win took a while to sink in, as it’s a little surreal to top 168 other beers. Judging such a large amount must be part skill and a fair bit of subjectivity, but happy to hear good things about the beer I produced. I still make my beer in a lot smaller batches than most, on a small stove top kit, but thankfully the entry to homebrewing is low enough that with a good recipe, good ingredients and a bit of luck, you will get a banging beer at the end of it.

The event seemed pretty successful, with a friendly atmosphere and an air of excitement to be in the new Beavertown digs. The experience has definitely spurred me on to go to more homebrew events, be it club meetings or competitions. The homebrew community has a huge amount to offer, especially damn tasty, home brewed beer.