Flagship February: What is Your Go-To Mass-Market Lager? 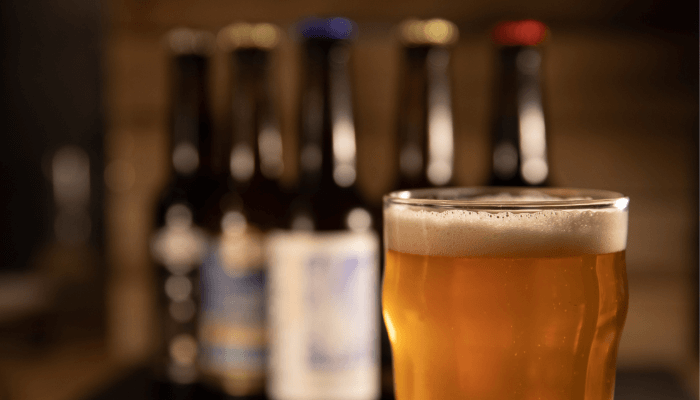 There’s no shame in smashing down a macro lager or two. Jeff Alworth, a well known author and blogger over at Beervana, recently put this question out there, creating a huge thread of responses.

I never seem to have enough bandwidth to participate in #FlagshipFebruary, but I will throw this out there.

Every beer drinker needs to have one mass market lager they love and drink. (Examine your life choices if you don’t.) What’s yours?

My current mass-market lager of choice is Pilsner Urquell. This is easily sourced from the local Waitrose, and is about £5 for 6. Urquell is now owned by Asahi, but the quality is still there and it has not been messed about with (like say, Stella Artois).

But I’ve had phases where I’ve drunk all kinds of dodgy mass market lager in my adult life.

The late 1990s were the peak and probably the end of lad culture, and the lager drinking dominance which went with it. When I say this I mean there was a real drinking culture featuring lots of lager. There were no craft beers in any mainstream places I went to.

Now, everyone’s experience will be different, varying greatly based upon age or location. I came of age during this time of pubs and clubs – I was 18 at the turn of the Millennium. Around this time I’d been working behind the bar at a working mens club. The rule for such clubs was that I could actually serve alcohol at 17 (that’s what I was told anyway). Of course, I was able to sample the drinks behind the bar too.

The multitude of bitters were pretty poor kegged things, either macro big beer or things I’ve never heard of since. Back then I didn’t drink Guinness either. There was a selection of dusty bottles too like Manns Brown Ale and Light Ale. Some of the older drinkers used to have a light and bitter, a mixture of Light Ale and a kegged bitter like John Smiths or Worthington.

There were many lagers on offer – along one bar there was Fosters, Carlsberg, Kronenbourg 1664, and Holsten Export if I remember right.

For me, It was halves of Fosters all the way (enjoyed usually for free, as they were bought for me by customers). This was by far the biggest seller out of the lagers on tap. It outsold Carlsberg at least 3-1, which at the time seemed to pong like old cabbage and Holsten Pils, which I think was the strongest beer available and had 1 tap and about 1 drinker.

To put that in perspective, Fosters had around 4 taps on and was changed multiple times in an evening. The beer was dirt cheap. We are talking about 80p a half of Fosters. I’ve got some good memories of drinking this beer with a packet of salt and vinegar crisps whilst shooting some pool, something I had lots of time to do when a college student.

Beer was even cheaper when I attended University in 2000. The main lager served was Carling. It was £1.30 a pint. My outrage was misplaced when it went up to £1.50 in my second year – they had revamped the Students Union bar from a flawed but comfy space to looking a bit like a Yates’. I would not touch the stuff now, but University was often about quantity, rather than quality.

Since then I’ve had phases of drinking different mainstream lagers, like Heineken and Carlsberg Export before my tastes started to develop and become somewhat more discerning.

I dallied with several beers regularly before my craft beer and cask ale obsession took hold. For my wedding, the lager on tap was Fuller’s Frontier, which worked well alongside the cask ales of London Pride and Surrey Nirvana from Hogs Back.

Around this time I started to drink Pilsner Urquell tank beer at the Globe in London. This beer was glorious, especially in the sun after an 8km run along the nearby canal. This got me into buying bottles and cans of this beer. Although not the same softness as the unfiltered beer from the tank, I enjoy the dry/bitter hit this lager provides.

If we ever are allowed visitors again, it is rare that they would prefer a more unusual beer, but some do like an IPA or classic English ale. More often than not, you’d enjoy a few lager beers straight from the fridge together. I like to keep a stash of lager in the cupboard most of the time for this very purpose, even if it’s currently not possible.

So, I do drink mainstream lagers, mostly at home. Sometimes, several cans is a welcome unfussy hit of refreshment that can mark the end of the working week. A drink you don’t have to think about that comes in good value multipacks will always have a place in my fridge.

Alworth has since explored this topic further in a blog post, which is well worth a read.