A Tour of the Five Points Brewery, Hackney

Like many craft beer breweries in the capital, the Five Points Brewing Company in London’s Hackney started life under a railway arch. It’s right under Hackney Downs station, and not far from Hackney Central station either.

The brewery takes its name from a nearby junction, known locally as the five points. The name has always reminded me of the area where the film “Gangs of New York” is set.

Luckily, Hackney these days is not quite as dangerous as the streets roamed by Bill ‘the butcher’ so I got together a few mates and headed down there at the weekend.

The Five Points Brewery in Hackney

I’ve tried a few of their beers before at the Stoke Newington literary festival earlier this year (yes, I am the personification of a North London hipster; no, I am not sorry).

Their tour consisted of an introduction to the ingredients that go into beer, a nose around the brewhouse, a history of the brewery and a tutored tasting of the core range of beers.

My recent read of Pete Brown’s ‘Miracle Brew’ has given me a solid understanding of beer’s ingredients, but it was good to actually experience the smell and taste of roasted barley in person.

Hands up who wants some water?

Five Points are very keen to state their independent craft credentials, and they are obsessive about all their beers being unfiltered and unpasteurised. All good things in my eyes.

In total, there were 5 beers to taste, using their sister taproom Mason & Company’s Teku glasses. There was not too long to wait before we got to taste the first beer, the Pils, and the beers kept flowing from then on.

I’d not had their Pilsner before, and it was the perfect beer to start with. 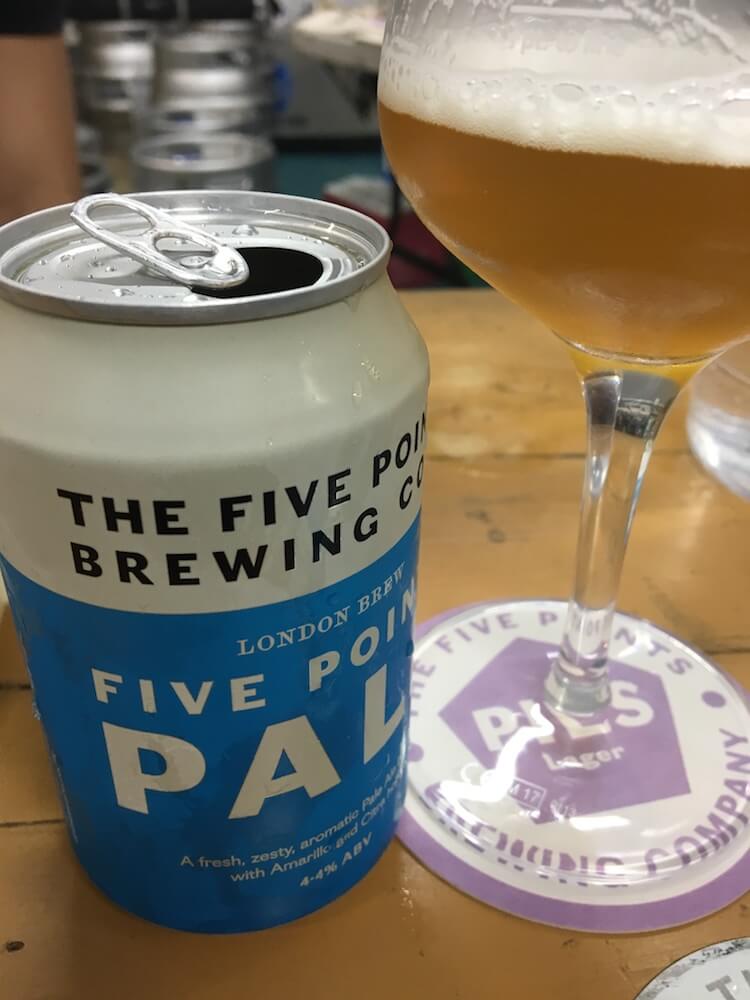 The Pills was followed by their biggest seller, the Pale Ale. Big on flavour, especially for something just 4.4%.

Whilst tasting the Pale, we had a look at the first stage of their brew kit in this space. This is where the magic happens! 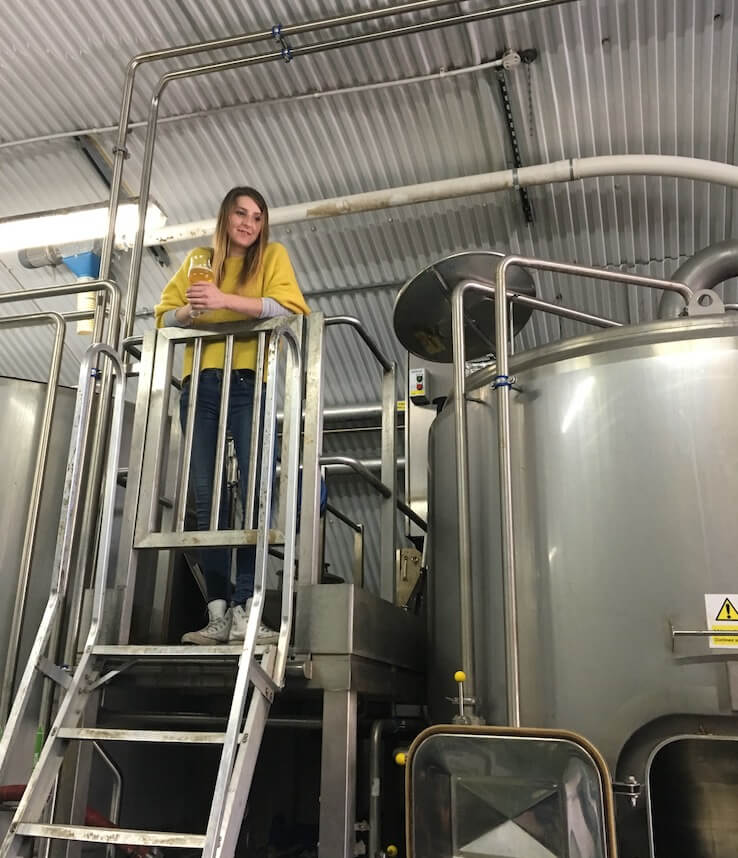 Let’s do the MASH

They have expanded the number of fermenters to maximum capacity, and even have several larger ones outside as there are obvious height restrictions.

With the next beer in hand, the IPA, we headed towards some of the packaging machines. They have a bottling machine, which I think was previously owned by Beavertown (when they still bottled).

They also have an impressive custom canning machine from the US, which I’d have loved to see in action. 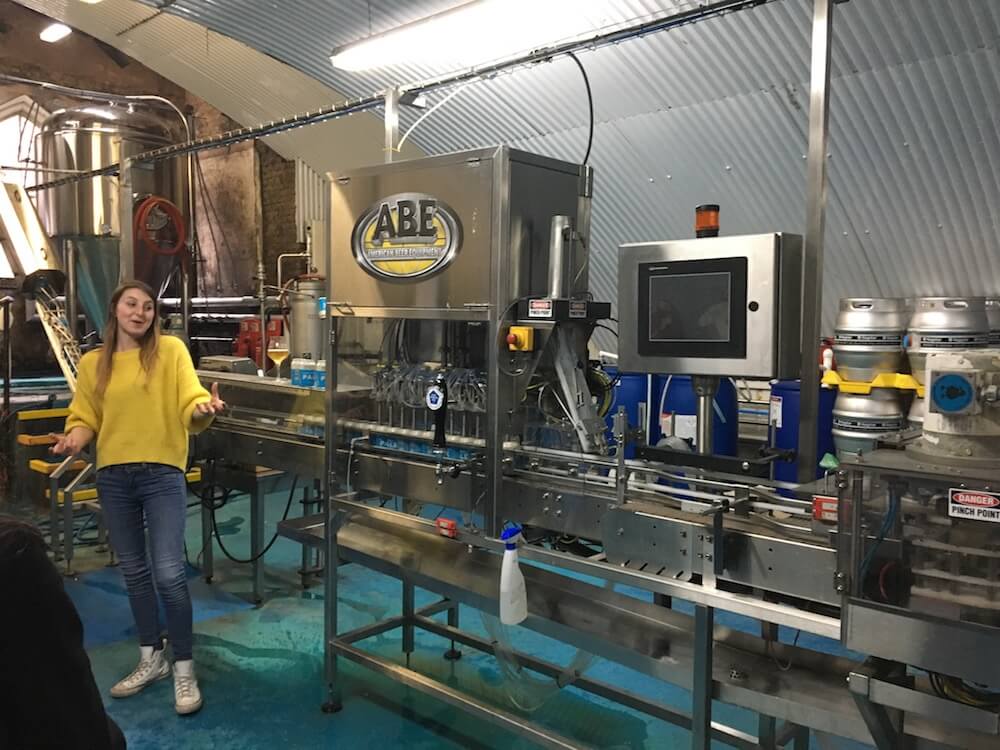 Five Points’ Alix gets excited by the canning machine

After tasting the luxuriously full-flavoured IPA, we moved onto the Hook Island Red. By this point the effects were starting to become a bit noticeable…

I am not usually a fan of red ales, but this one was intriguing. It has an interesting combination of malts as well as the inclusion of some American hops. I’ll certainly look out for this to try again soon. 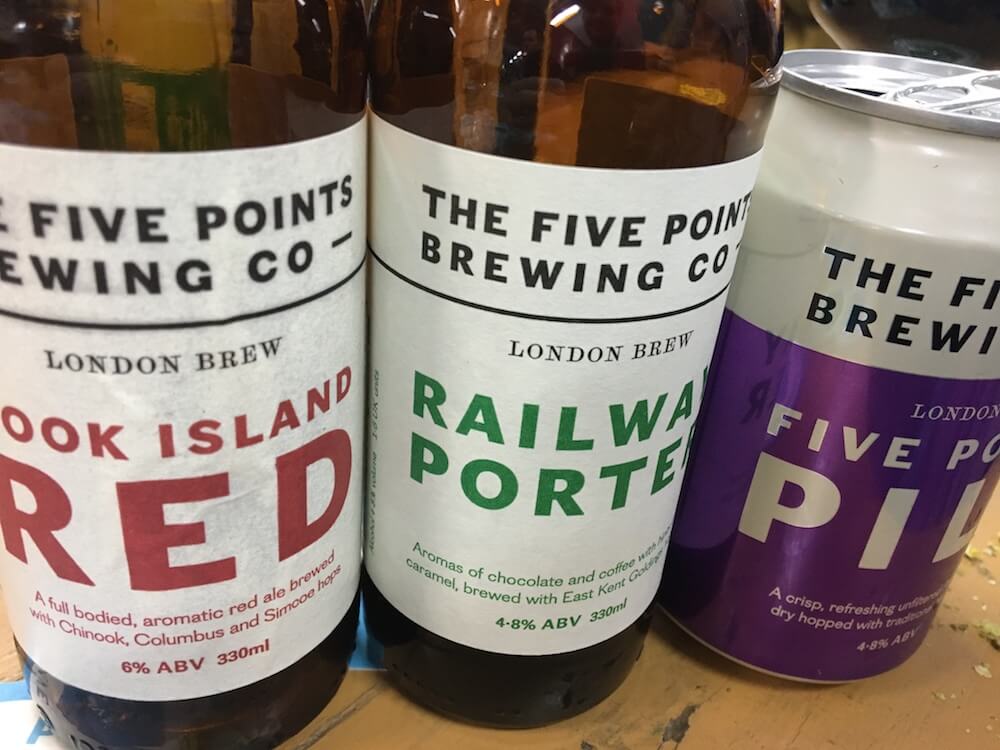 I have not drunk the Railway Porter before, and it is one which has been on my list for some time.

I was not disappointed – this beer is incredible! I can see why it has been getting rave reviews. A true London porter, it differs from dry stout in that it is sweeter, with a silky mouthfeel.

Unlike their other brews, they don’t have to change the hard London water much at all to create the right brewing liquor for this beer. I will definitely be looking out for this on cask.

With our porters in hand, we popped next door to the new space to find out what the team is up to with their barrels.

There’s something romantic about barrels. The smell, the look and the feeling that you are just leaving them for ages, letting the wood and its microbes do their stuff. 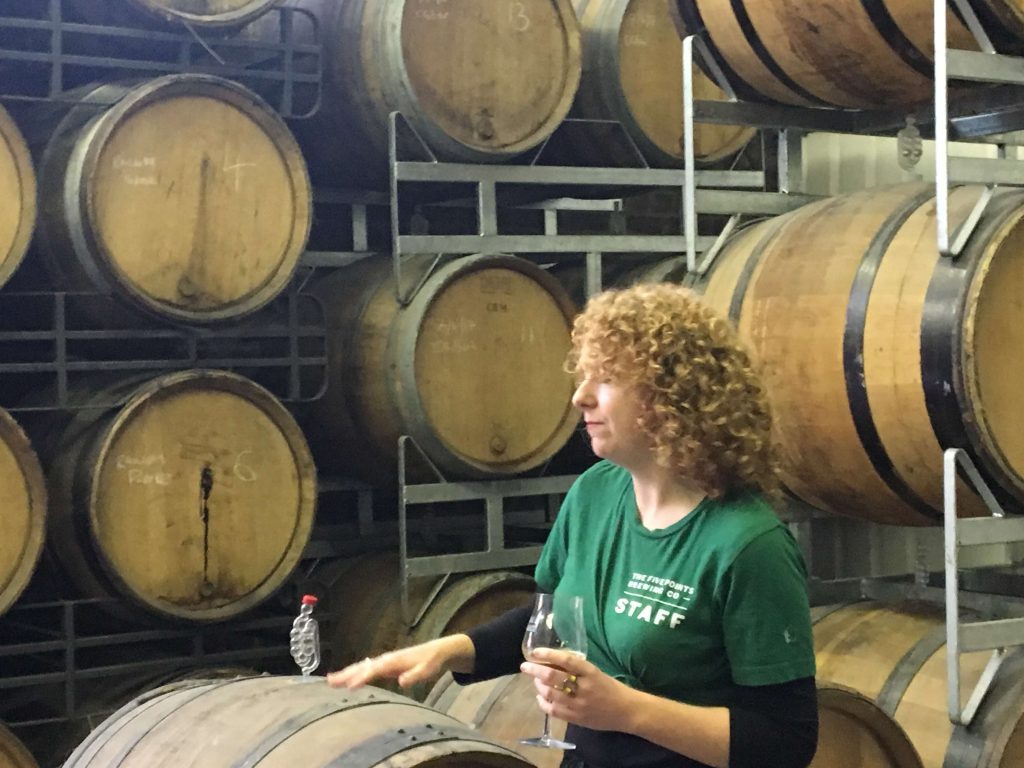 Five Points’ Francesa having a tender moment with the precious barrels

They have a sour in one of the barrels, you’ll certainly be lucky to get to try that – if the staff don’t drink it first!

They had a few of the beers from the barrels available to buy, and I took the Barrel-aged railway porter and Old Greg’s barley wine away to try another day. 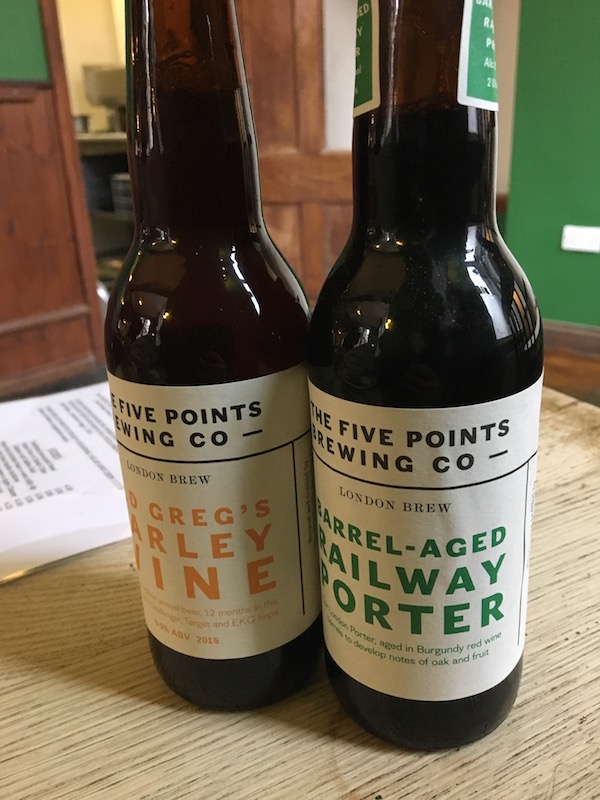 After we’d finished off our porters, we strolled off (probably like old Greg himself) to find some food – and maybe a few more beers.