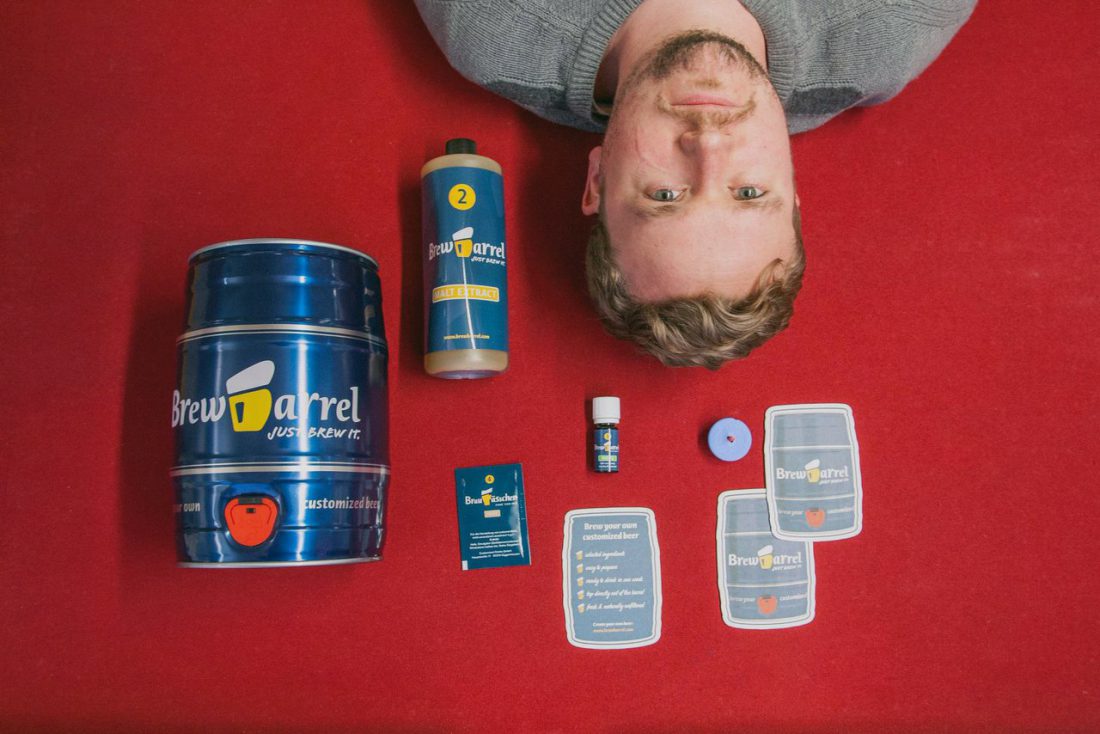 With the new wave of beer exploding all around us there’s been a steep rise in all sorts of brew-your-own-beer-at-home solutions. Anything from stainless steel wonder-machines that promises to brew beer at the press of a button to kits that you just mix together. One of the companies that (according to themselves) have had success in Germany is Brewbarrel. They’re now launching here in the UK, and they asked us to give their customised homebrew solution a go.

We rarely do these kind of things, but I was curious what kind of beer it would produce? Would it be any good?

Brewbarrel works like this. You go to their website, select what kind of beer you want to brew, they send you a kit, you mix it all together, wait a week and, hey presto, you’ve got your own keg of beer. Yeah! Fist pumps. Etc. Sounds so easy. I started by going onto their website to customise my beer, and their website is pretty damn hilarious. Parts of it looks like it’s been translated using Google Translate. Their ‘About Us’ page is as corporate as a bank with confusing statements like “Our goal is to observe the brewing scene from different perspectives, using all our passion to refocus the beer experience back on society – and fun never gets a raw deal at work!” The website is also littered with happy young people brandishing tankards and beer kegs, trapped in a perpetual party that looks like it’s held in an IKEA catalogue.

During the customisation process you have to select your beer style, the hops and other flavourings. I chose a pale ale and standard hops. The hop options were mild, standard and bitter, which made very little sense to me. The real fun started in the flavour section. Here you can select anything from grapefruit and lemongrass to honey and aroma hops. Pleasantly surprised I added some Cascade hops and some bourbon timber. Yes, timber. Sounded too good to pass on. My beer definitely needed some timber. This was then all turned into a kit using science and technology (I’m guessing here) and shipped to my door. 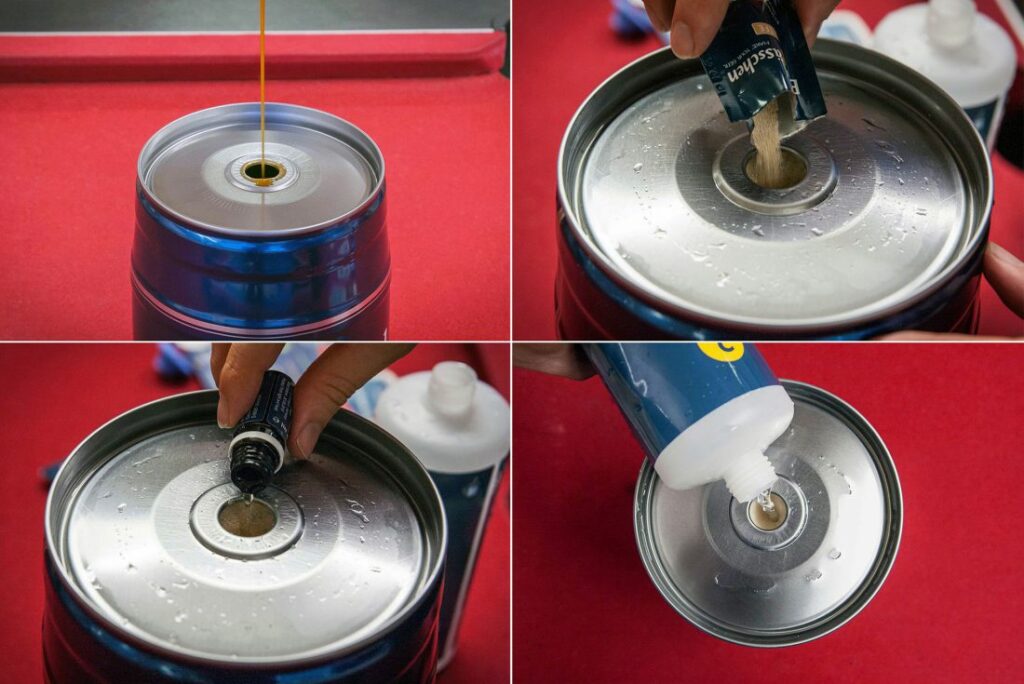 The kit that arrived contained an empty five litre keg, a big bottle of some sort of malt extract, a small bottle of hop extract, an airlock, an instruction manual and a couple of coasters for protecting my table when I’m getting drunk on this stuff. How German.

There was no sign of any of the additional flavouring I added. I can only presume they were included in one of the other bottles. I promptly started brewing my beer. First I poured the big bottle into the keg, added hot water, shook the damned thing and then filled it up with cold water. I then dropped in the yeast and the hop extract, stuck the airlock in the hole and parked it under my desk. Done. It would’ve been good to have a funnel, like the smug party people on the website. The instruction manual said to turn the keg over after 24 hours. It did point out that some foam may come out of the valve when you do this, it didn’t say that it would spray the floor with sticky pre-beer shit. All that remained now was to wait another few days, then stick the bastard in the fridge for a couple of days, before it was drinkable.

The day of consuming the concoction was upon me and I reverently lifted the keg out of the fridge. I’m pretty certain that I’d followed the instructions to a tee.

I poured myself a glass and inspected the liquid. It was hazy with white bits floating in it. It said in the instruction manual that “any undissolved ingredients should not be consumed”. Fuck it, I hadn’t come all this way not to put some in my mouth.

It also had notes of feet on the nose. Never a good sign. Undeterred I gave it a sip. It wasn’t beer that was in my mouth. It was sweet and malty and musty as hell, with a bit of carbonation. Not very pleasant. Actually the opposite of pleasant. It reminded me of my dad’s Christmas malt drink he used to cook up every year and force the family to drink. There were no Cascade hops, and no bourbon timber. It just tasted like something that would make me violently sick if I had too much of it.

To be honest, it tasted exactly like what it was – something a complete amateur had made at home.

Why would anyone do this? That’s the questions that was ringing in my head. And since we’re not really in the business of taking a dump on people, we reached out to the guys to see if they could explain why they’ve made this dreadful product.

We got answers by email from Wolfgang Westermeier, the founder and CEO, whose favourite beer, according to their website, is a lager with lime and guarana. They found home brewing too complicated and time consuming, “therefore we rethought the process of home brewing to find a solution to brew beer fast and easy.” He explained that Brewbarrel is for people who wants to brew but are intimidated by the complex process. They don’t have to read anything, they don’t have to buy any equipment or do any cleaning. Bish, bash, bosh. He also pointed out that it allows people to experiment, or as he puts it “it’s intended for people who want to try an exceptional beer with a special combination of flavours.”

It sure was special.

I’m pretty confident I could train a monkey to make a Brewbarrel “beer”, so yes, it’s easy. But one thing that’s even easier is spending the 30 quid it costs on buying some beautifully and lovingly crafted beer, made by people who know what the hell they’re doing. Cheers.

Written by Per Steinar.