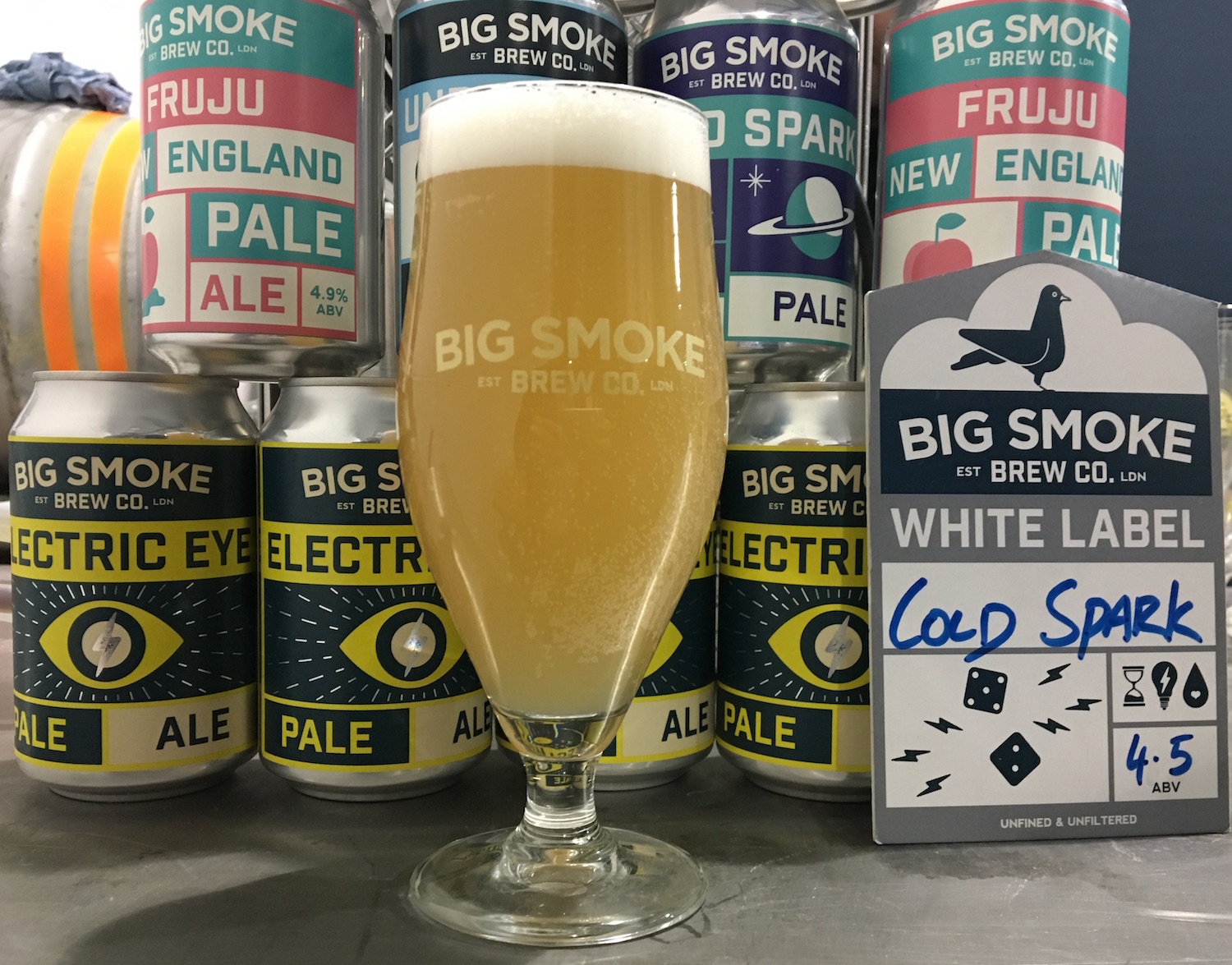 Much like the brewery’s own journey, the event started at the their original location, The Antelope, before heading to their new home at Esher’s Sandown Industrial Estate.

Big Smoke was founded in 2014 by Antelope pub licensees James Morgan and Richard Craig, with the backing of Greene King. Within a year they were crowned ‘Greater London’s Best New Brewer’ on Ratebeer.

5 years on, I discovered for myself that Big Smoke’s beers are a long way from Greene King IPA and Old Speckled Hen. 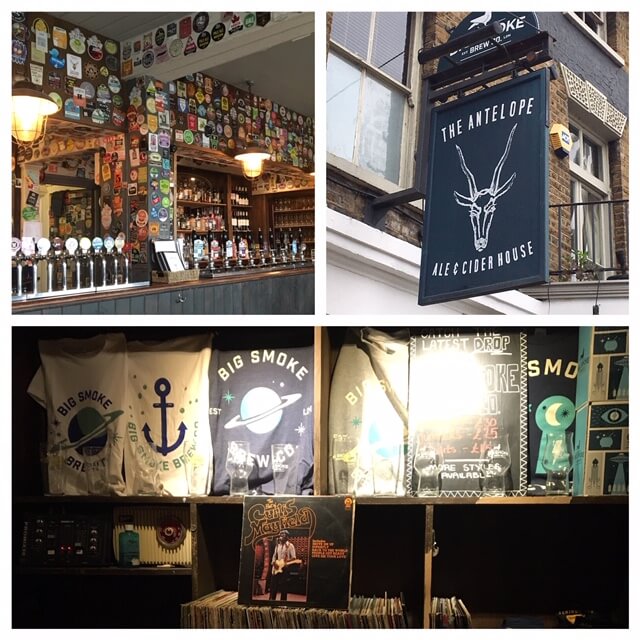 The Antelope had been a real-ale mecca for some time, but now boasts not only 12 cask lines but also 12 keg lines, making it a must-visit ‘beer led’ pub for craft beer devotees.

With such a choice after a long journey, I searched for something light and refreshing.

I was directed to the Cold Spark, a 3.9 Citra pale. This beer recently picked up a Keg Gold prize for ‘Speciality Light Beer’ at this years SIBA independent beer awards. Light bodied, palatable, with tangy citrus tones and a crisp finish.

An excellent way to start the afternoon.

Not long after, the group was herded onto a bus for a short journey to the new brewery. This expansion was made possible by investment from one mysterious private individual. This could well be common knowledge, but I prefer to imagine that a Mr Burns-like character is behind it all.

The move is similar to the route taken by many small breweries looking for more space to expand. There’s an area outside which can be used for tables on a weekend for punters willing to trek out to a car park for a brew. Certainly a tick for any growing craft beer brewery wishing to cultivate a strong local following.

Inside, the unit is well laid out, with plenty of height. There’s space to further expand, as well as the possibility to develop a brewery tap at the site. The increase in capacity has meant that popular core beers which were contract brewed elsewhere can be brought back in-house.

Not knowing what all the shiny mcgubbins did, I tried not to touch anything in case an errant knock caused foam to cover other notable attendees. However, I did spot some rather lovely fermenters which looked pretty huge and expensive to me.

One-pint in I tried to climb-in but was dragged back down to try some more beer. 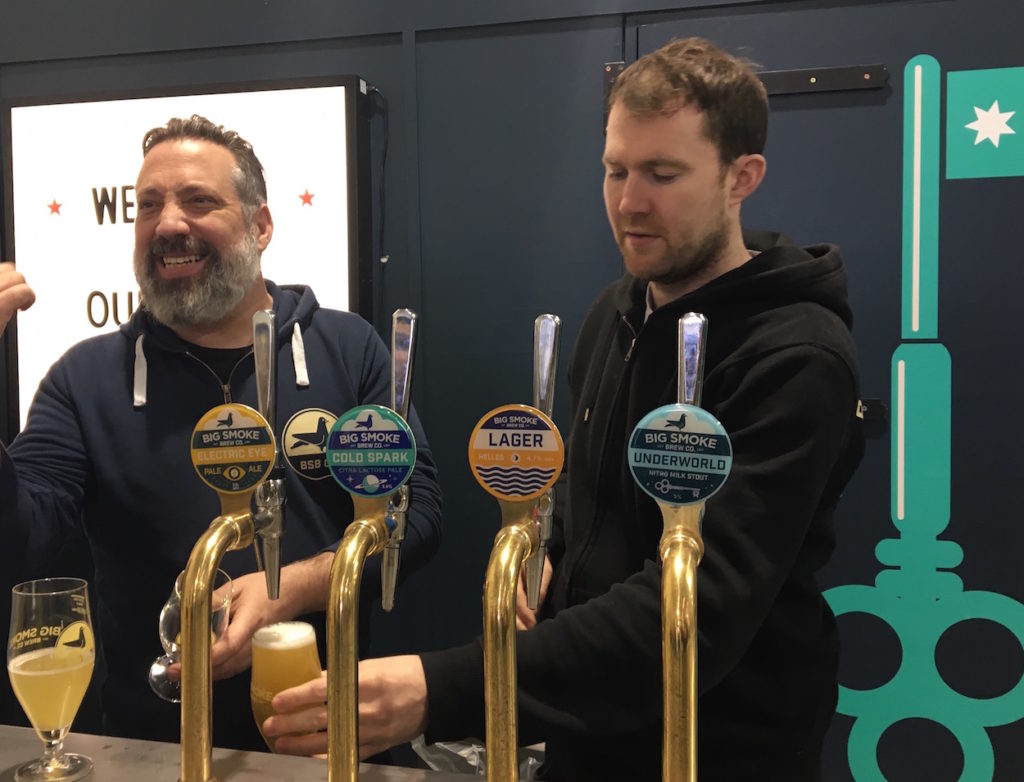 The Lager was crisp and perfect for a sun-baked session. The Electric-Eye gave a burst of citrus flavour and tasted eye-poppingly good when served this fresh.

The Electric Bear’s DH Kiwi Sour was a mind bending, logic defying potion of hideous sharpness and unknown potency. Being at once as rich as a concentrate, yet aware.. as if actively embarrassed by its most distinctive attribute. It left the impression of a juiced lemon rind in clotted cream. One for the bucket list.

Food consisted of a decadent brisket roll and ribs. The ribs were smothered in a mouth watering smoky BBQ sauce. After a short silence only bones were left.

After scoffing the insanely good, generously portioned ribs it was time return to the pub. It was buzzing, with a varied clientele.

I ordered an Underworld stout on cask to compare. A miss for me as the lactose sweetness was a bit too much without that cool-crispness. Nitro wins the day.

So spaced out was I after two more pints from Big Smoke at the pub, that I attempted to obtain one of the excellent Big-Smoke T-shirts. Alas, none were available in my size, but they do have a rather snazzy online shop should the need arise.

As I write this, I have cracked open a freshly canned ‘Electric Eye’, one of the core range. A lovely beer and I wish I had a fridgefull. Thanks to Big Smoke’s increased capacity and new canning line, we all may be able to.

Expect to see Big Smoke in the off-trade in your local bottleshop soon!