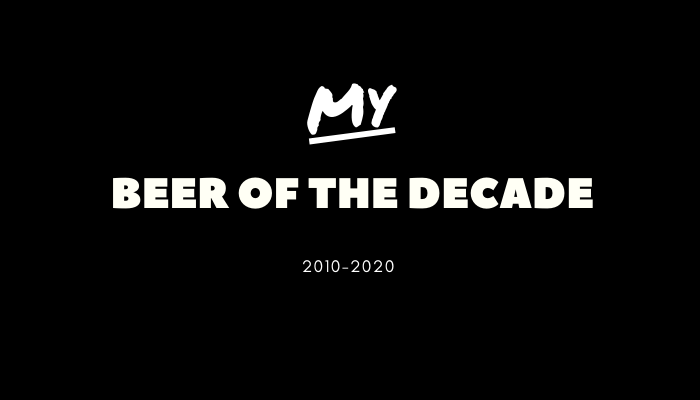 A conversation on Beer Twitter during #craftbeerhour at the end of 2020 got me thinking – what is my beer of the decade?

Tom Shapely, the fine chap who runs Craft Beer Hour said his was Rothaus Lager. A fine choice, but my lager drinking ways took place over the previous decade for me.

In the beer world, the last 10 years was a long time and like the beer scene itself, my beer journey and tastes have evolved significantly in this time.

My tastes started to stray from mainstream lagers at the start of the decade, especially as my drinking habits changed and were comparatively more sedate.

But is there a single beer which has had the biggest impact on my beer journey? And is there a beer that I consider my personal beer of the decade?

I think there is a beer that fits this definition when judged over the last ten years and it can only be one beer for me, and that is Guinness.

A beer I return to again and again in all of its different forms, even if I did not drink all that many in 2020 while pubs have been closed.

I can trace the time I started drinking Guinness to my first trip to Dublin back in 2008. I was a macro lager drinker in those days. It was more about quantity over quality back then.

I’d drunk Guinness before, usually on St Patrick’s Day. I remember the time the university bar gave out hats if you managed to sink enough. A feat I do not remember achieving.

Whilst in Dublin, I only drank Guinness of course, and visited the St James’s Gate brewery for the first time. Looking back, this was the first of many brewery visits too. Even if it is a mere tourist ‘experience’ rather than a real brewery tour, it must have made an impression.

I remember being at the top bar and looking out over Dublin with a pint of Guinness before heading to the large gift shop to buy a poster or two. I still have a faded Guinness mug from this trip.

To my mind it was some time after this visit when I started drinking it exclusively when out. In some places, I’d nip out with a work colleague at lunchtime for a cheeky pint or two. More often than not, we’d be drinking Guinness.

Around the start of the 2010s I spent some time learning the ukulele and then playing with a ukulele karaoke band, ‘Karauke’. I drank a fair amount of the black stuff during rehearsals and also on stage to settle the nerves, despite the long wait to get a pint each time. It was a great drink for this as it did not matter if it warmed up a bit while you were doing your thing.

See also  I Visit London Brewers Market with a Hangover

It served as a gateway beer for me. I started to try more different beers – craft beers as well as lots of cask ale.

But Guinness was more dependable. You usually know it will be to a certain standard and I found I would always come back to it. It is ubiquitous – you can find it everywhere, and the ceremony of the pour is a clever trick. No other beer really has such theatrics, and looks so iconic, especially when the swirling depths are lit from below from a majestic, towering font.

In a sea of same-same mainstream lagers – Guinness stands apart. Dark, mysterious and a brand that is known worldwide. A feat not achieved by any other dark beer.

About a month before I started this blog I returned to Dublin, this time for a stag weekend. Of course we made our way to St James’s Gate Brewery on the first day.

I was more into beer by this point, and decided to try different beers on our route until I’d poured myself a Guinness at the brewery. Then the floodgates opened, and I drank it all weekend. It was grand, and a right Craic.

This was before I used any app to check in beers. If I did it back then I’d have ticked up a lot more Guinness, and not much else. Looking now, it is still perched on the top of the list, even if I don’t check many multiple beers from a session and do not drink this beer as often anymore.

Do I still drink Guinness?

Yes, now and then. Over the past year I’ve made more effort into seeking out different bottle conditioned versions. I’ve only just really discovered the superb Foreign Export Stout, for example, drinking versions from Kenya, Nigeria and Ireland.

I prefer it in a pub, and preferably an Irish pub. My recent favourite is the Fiddler’s Elbow in Brighton. A great place to go for a good pint of Guinness and an Irish Stew. I am looking forward to returning when all this is over.