An Ode to Augustiner Helles Lager 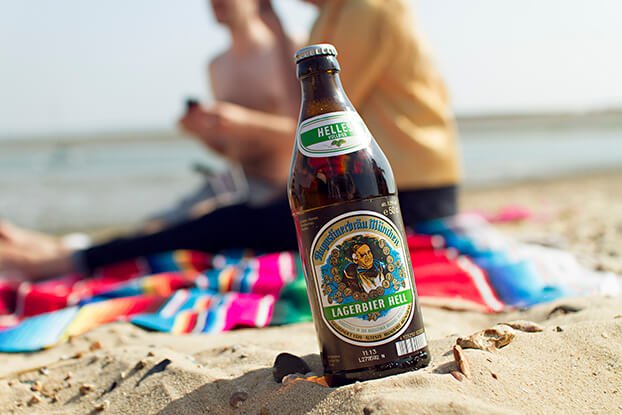 After returning to London from almost three years living and working in Berlin I’ve found a few things that us Brits could learn from that hipper-than-hip urban wasteland – we should have bars that are open until 6am on weekdays, techno deserves a second chance and we should start importing large amounts of Augustiner Helles.

Throw a rock in the East side of the German capital any day after 9pm and it’s likely to plink off a bottle of someone’s Augustiner. The tall brown bottles are clutched by revellers and commuters alike, on trams, walking down streets and outside any bar that catches the evening sun.

It’s available on tap in most bars, in bottles in every corner shop and is considered to be the unofficial drink of Berlin for its unparalleled balance of taste, potency and price.

Despite its relatively new-found fame, Augustiner is far from being a hip new beer. Its frankly hideous label hasn’t changed since the 80s and no advertising campaign has ever been made for it (they do have a website but from the looks of it this was made when Netscape Navigator was still a credible browsing option).

What Augustiner does have however is history, and tons of it.

First brewed in the mid 14th Century in a Munich monastery; what is now known as the Augustiner-Bräu brewery survived both the great de-monking (more properly known as the secularisation purge) of the 1800s and a rather accurate bombing by the Allies in 1943. Despite these two historical trifles, the brewery has never budged an inch and continues to brew using its 600 year-old recipes to this day.

I bring all this up because I thought my Augustiner drinking days were over once I moved back to the UK; a country where the four horsemen of the drinking apocalypse (Kronenbourg, Carlsberg, Stella Artois and Fosters) are usually your only choice if you’re in the mood for something light and gassy.

Fortunately for me my new local, The Pembury Tavern in Hackney, has started to sell the half litre bottles of Germany’s finest as part of its permanent offering. I spied it cheekily hiding between the Bulmers and Rekorderligs and my heart flipped over; there in all its hideous beauty was that strange old man wearing a bib, his off-colour face bringing back memories of learning how to open beer bottles with lighters and wandering home at 9am once the barman had finally decided that enough was enough.

I snapped one up to see whether a 550 mile journey from its homeland had detracted from its unique taste. I am pleased to report that it has not.

Being a Helles-grade lager, Augustiner is as light as it comes.

When poured (if you must) into a glass it has that characteristic golden coloration that insists you find a nice poolside or a barbecue to enjoy it by. The taste however is surprisingly strong given its rather watery consistency.

The signature malt that is used in all Augustiner-Bräu beers is old enough to carry some swagger on the taste buds and the water – drawn from a company owned well near the Black Forest – gives a refreshing crispness sip after sip.

The aroma does little for the experience, but drink enough of them and the whisper of malt in the air will soon transport you to happy, vaguely remembered nights in your mind.

So if you’re anywhere near Hackney Central, or find this peculiar specimen in a fridge I recommend you check it out. It changed my opinion on what its detractors refer to as “Eurolager” and steered me in the direction of many a good time.