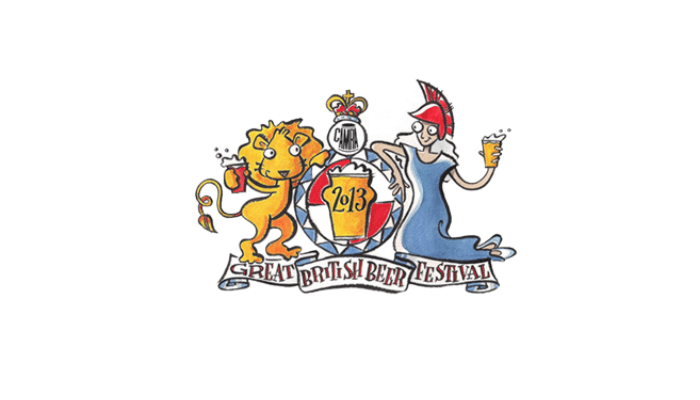 When I first moved to London I noticed several large advertisements for the Great British Beer Festival.

While I couldn’t make the festival that year, I decided that I’d check it out the next summer. I’d learned a bit about CAMRA a few years earlier after discovering Tim Webb’s fantastic Good Beer Guide to Belgium. So when I moved to the UK I quickly became a dues paying member of CAMRA.

I don’t know how forcefully I should state this, but the beer scene in London in 2007 was, as you might know, much different than it is today.

Instead of the 40+ new London breweries being sampled, discussed & quaffed, Young’s was merely the most recent brewery to leave London with the closure of the Ram brewery in 2006. There simply wasn’t the same volume of exciting beers from the UK, Europe and US that spoil us for choice in the capital today.

In essence, things are much better these days.

The American Bar at GBBF

When next summer came I decided to volunteer at GBBF for a few days. After helping to set up I worked the first public session at a bar that shall not be named.

However, during that first session I quickly found my kind of people, The BSF – Bières sans Frontières, or as we write it en Anglais, Beers without Borders.

The bar was an uninterrupted stretch of around 100 feet of the best beer from outside of the UK – a beachhead if you will, lurking in plain sight just around the corner from where people came in and picked up their festival glasses.

The next day I showed up for my session and announced to the volunteer coordinator that I would be working BSF bar and quickly headed down and found my spot on USA bottles and casks.

One could make a compelling argument that I am uniquely equipped to work the American bar at the GBBF, especially in comparison with the typical CAMRA volunteer:

While I had spent most of that previous year in London ordering from the cask selection of real ales at pubs, I did that more out of a desire to have local, flavorful beer than for any underlying ethos about whether a beer should be served from cask or keg.

To be honest, it wasn’t even during that first festival that I caught on to the fact the American brewers were doing something decidedly different by sending over cask conditioned beers for GBBF while the Germans and Czechs were serving their beers from keg at the opposite end of the BSF bar.

What I enjoyed was the beer. And the BSF bar had that in good measure.

I met Doug Odell as he unassumingly served bottles from the USA fridge and learned how Menno Olivier from De Molen always brought along wine and whiskey barrels full of magical things and served them straight from the barrel.

I ended up working several more days and many more sessions than I had initially signed up for, and worked as much as I could the following year.

I met Carlos Garcia that first year, a resident of New Mexico, a state bordering my home in Texas. Carlos had started working at the festival a few years earlier and he and his wife still come to the festival every year.

I met numerous other BSF regulars and when I returned to the GBBF this year, and walked to the multiple BSF bars, I remembered many, many of the same faces.

I had toyed with the idea of coming back for the festival in other years, but travelling at the height of the summer travel season, and using either lots of $$$ or lots of frequent flier miles to volunteer at a beer festival just didn’t tick all of the boxes, rationally speaking.

The American beer bar at GBBF

While I was thrilled to be back at the GBBF a few weeks ago, I was disappointed at what’d happened to the BSF bar in recent years.

Last year, during the Olympics and with the venue-change to Kensington Olympia from Earls Court, the once unified BSF bar had been broken up.

Now it was German/Czech, Belgian/Dutch/Italian & USA/Rest of World. They were no longer next to one another in a single bar.

This year’s matters were made even worse as USA bottles and USA casks were located as far apart from one another as they could possibly be. The four BSF bars were essentially at the far corners of the festival.

Having previously floated between the two sections of the USA bar, or even further, throughout a given day, I found myself locked into either bottles or casks. When it was time to take a break, my first movement was to see what was on at the German/Czech bar or the Belgian/Dutch/Italian bar.

The splintering of the BSF bars made me even thirstier for the beers on offer at the other BSF bars since I hadn’t been able to discuss it with my beer NGO compatriots.

Back in 2008, one of the things that I found odd was the fact that there were no beers from the central part of the US. There was no beer available from between Pennsylvania to Colorado.

Carlos started cracking this egg a few years back.

Last year Marble Brewery from Albuquerque, NM, took gold on the USA cask bar with their DIPA, though this year they had to settle for silver. Last year, I tried to get some Texas beers to the festival but failed, basically due to transport and logistical issues.

This year Carlos got 15 casks to the GBBF, including the first Texas beers ever. Saint Arnold’s Elissa IPA was a big hit and sold out in just a few hours. Brock Wagner, the founder of Saint Arnold, the oldest craft brewery in Texas, came to the festival this year for the first time. Brock reintroduced me to Fuller’s ESB, the inspiration for his Saint Arnold Amber, while I was able to introduce him to the new wave with The Kernel’s Table Beer and Export Stout London 1890.

Some have argued that the beers would be better presented on keg. While I’d agree in most cases, I’m not going to worry too much about that, because most of these beers would never reach British drinkers if it weren’t for the existence of GBBF.

The brewers, the Brewers Association and the BSF team all coordinate to get them to the festival. If someone asked me if they should have Sierra Nevada Torpedo or Stone RuinTen, I told them to have RuinTen, likely the only 9 gallons to reach the UK this year.

Over 100 USA bottled beers were also available, and at prices that were quite reasonable for the UK.

The only thing that really bummed me out was the cans. Apparently CAMRA doesn’t allow canned beer at its festivals, which really is a shame. If they’re going to allow beers that aren’t bottle conditioned, I’m not sure why they would pick on cans.

So while there were numerous beers from Oskar Blues, Ska, Maui and others, initially within our BSF coolers, none of them could be sold to festival visitors.

Working the trade session added a bit of additional fun as I got to serve good beer to people who normally have been making it or serving it to me.

I stood on the other side of the counter serving beer to people I know from the new world of London and UK beer, serving the likes of Craft Beer Co staff, Partizan & The Kernel. Strolling around, I saw the crew from Beavertown and Euston Tap enjoying the session.

It’s a shame that not many of the new UK breweries and their key kegs were at GBBF, but I suppose there is a time and a place for them as well.

With any luck you’ll find me serving American beers at the GBBF next summer, and if all is well the BSF will be back together in one location.

The Michael Jackson award for best American cask ales at GBBF for 2013: